We got to Pittsburgh by about 9:30, delayed some by construction at the very end that forced us to abandon the satellite navigator and make some hopeful guesses about how to navigate the city streets. Check-in for Pinburgh was at the same bar as last year, a spot it was hard enough to find parking for (really we had to be patient for a spot to open up). This year admission to ReplayFX, the convention, would be granted by an elastic wristband, a great improvement on last year's daily paper wrist straps. Admission to Pinburgh, the pinball tournament within the convention, was by a large badge on a lanyard. Really good design; we liked it.

And then we went to check in. We had, long ago, planned to room with JTK and CVK. JTK had reserved two Embassy Suite rooms at the wonderfully low employee rate, when he worked for another hotel in the chain. Last fall he lost his job with the hotel, but he thought this shouldn't affect his reservation, already made. A few months ago he admitted that he happened to check and found something strange, that instead of two rooms there was just the one reserved. This threatened trouble: MWS is, by every account, a world-class snorer. The sort of person whose snores sound like three trains crashing together. And the trains need CPAP machines. We could not sleep in the same room as he did, and he agreed with that.

Well, but. We'd been at this Embassy Suites before. The rooms are very large. There's, like it says, a suite of rooms. If we had the bedroom and MWS slept in the other end of the living room, several miles away, it might not be too bad. JTK and CVK could sleep on the fold-out bed. We might make this work and oh, two weeks before Pinburgh JTK mentioned that he had a friend who was coming along. And that was just our limit. It was hard enough to figure how we'd manage the morning bathroom situation with five people; with six? Even if that sixth was not going to the tournament and so could try to sleep through five people showering and dressing? No.

We had already reserved our own hotel room, fearing that JTK's reservation would be refused by Embassy Suites on the grounds that he was not actually an employee and hadn't been one for nearly a year now. Or, my suspicion, that he had never made one and was confabulating excuses in the hopes something would turn up. We also had the fear that while rooms in the Embassy Suites are supposed to all be suites, there were rumors of some that were just the bedroom and bathroom, and that JTK might have got one of those instead.

JTK was as good as his word, though: there was the suite, and MWS was able to stay in it as planned, although he had waited until the day-of to cancel his backup hotel room. Conceivably the whole thing might have worked, and our bank accounts would have been larger, had we trusted more in JTK but I just had no confidence at all.

Our hotel room was in the Drury, a reservation which originally belonged to JDO and transferred to us in the last-minute flurry of Pinburgh hotel room exchanges. The clerk at check-in pointed out that we could eat at Condado Tacos, right outside the back door and not half a block north of us. This was tempting and we would get to the tacos-built-to-order place several times over the weekend. But I thought that would be too long a wait since every time we'd visited it the place was packed. I thought we could just go to a 7-Eleven and get something small and simple and fast. The catch is the only 7-Eleven I knew in the area was attached to the Doubletree Inn where we'd stayed last year. I knew the way to navigate there. I did not know that the sidewalk to there was closed for reconstruction. I was not at all confident in my ability to navigate around this. If this seems petty to you remember that we haven't got smart phones so we would have to guess at the downtown Pittsburgh street layout at night and hurry before the 7-Eleven's closing time. (Don't laugh; this one had a closing hour last year. Not so this year.)

So without a better idea we went to the Burger King, which didn't even have a Coke Freestyle machine, but which offered us the chance to get onion rings (me) and fries (

We had pinball to play in the morning.

Trivia: John Bates's 1836 Directory of Stage Coach Services lists 342 scheduled daily departures from London. 275 of them were run by three enterprises. Source: The Railway Journey: The Industrialization of Time and Space in the 19th Century, Wolfgang Schivelbusch.

PS: More picture from that Wednesday, our last full day in Mexico City: 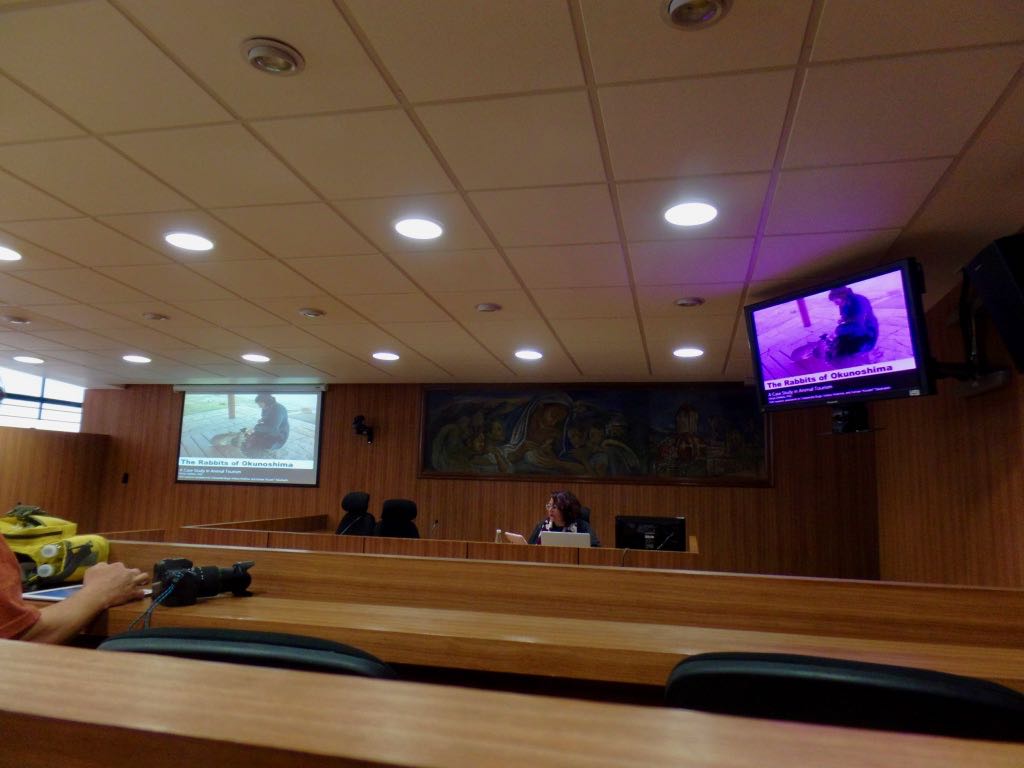 Talk being given inside that mock courtroom classroom. The presentation, as you can see, was about the rabbits of Okunoshima, the famous Rabbit Island of all those viral videos of rabbits swarming people. We had thought the Rabbit Island rabbits, honestly, sad things because they've far overpopulated the available food and will chase down people --- who're feeding unhealthy things like carrots (too sugary) --- because they're starving. But the evidence suggests that the rabbits don't seem necessarily worse off than those in actual balanced ecosystems, except it's hard to be sure because it's hard to do the rigorous science in the face of political complications. It's all complicated and a little messy. 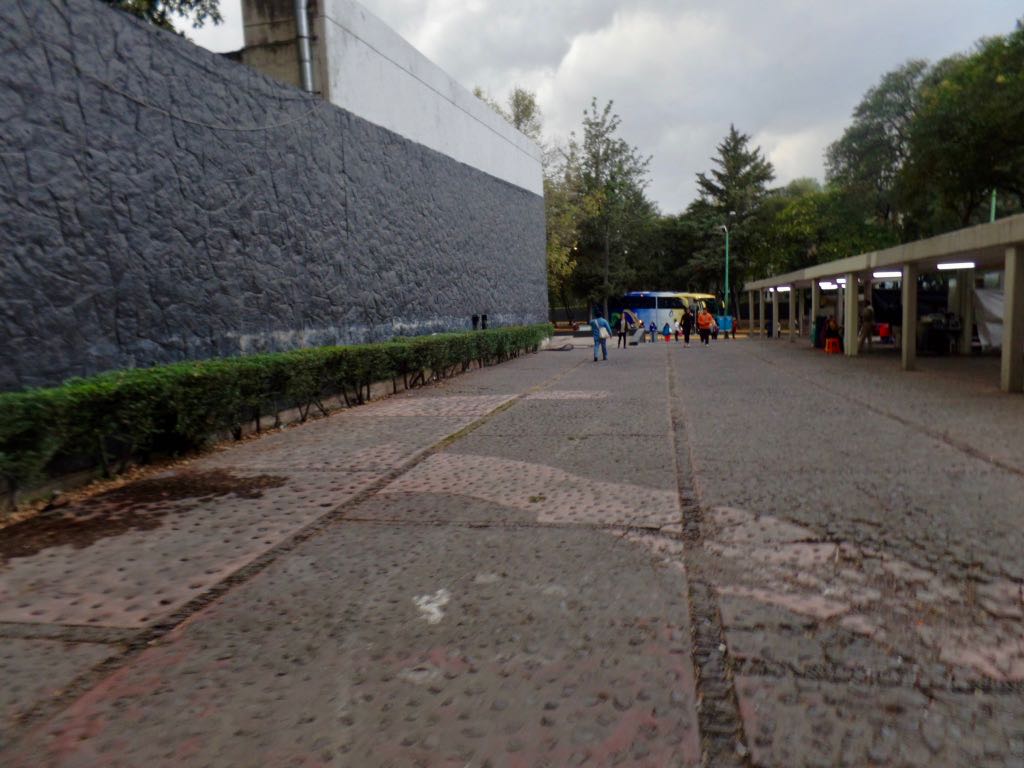 The end of the day, and the conference: we were shepherded back to the bus stop, here, to return to the hotel. 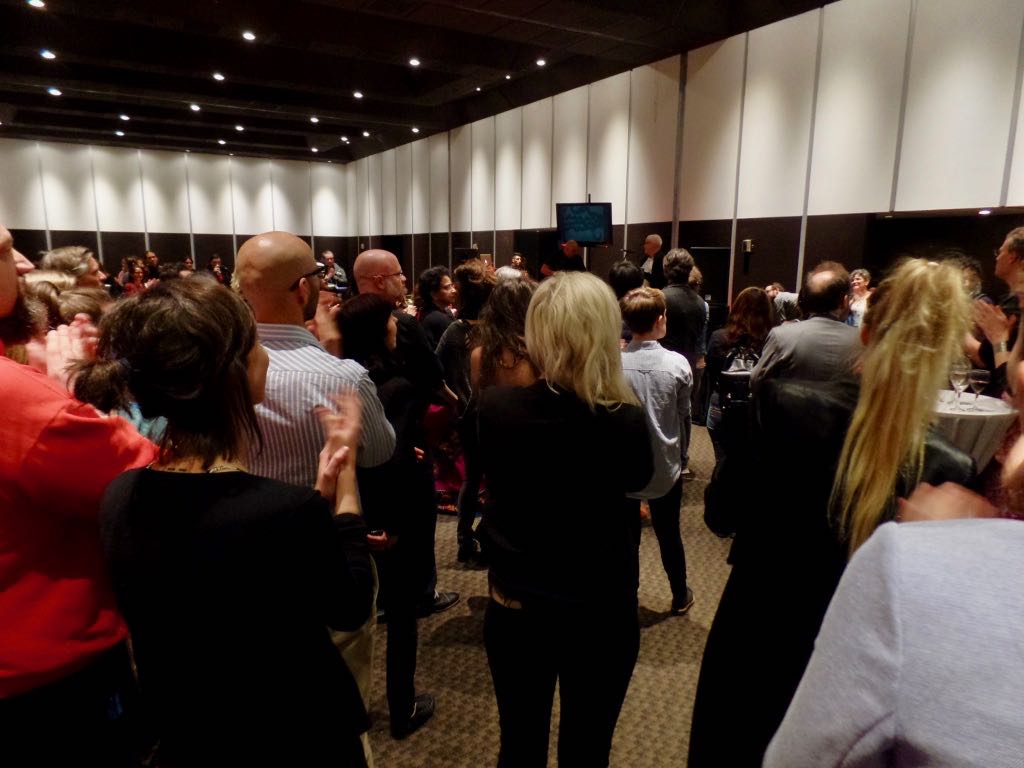 And here's the reception, back at the hotel, congratulating everyone still there for the end of the conference. There's a DJ playing 80s (American) music videos in the background somewhere.