Friday we all had our divisions, and we'd be playing for the chance to make finals. We didn't have to be at the convention hall until 10 am, so we slept in a little later and got to breakfast a little later and I was still eating eggs as they took down the breakfast buffet and even cleaned our salt and pepper away. I said ``thank you'' to the staffer who took the salt and pepper away, for reasons I will never know.

Walking to the convention center I realized I hadn't taken my collapsible camping chair. We'd gotten these last year, because Pinburgh is always short of places to sit and there's a lot of time spent waiting on a cement floor. I don't use the chair enough, but it's great to have. I went back for it after the first round. I didn't want to be late.

My bank, Procyon, was near the entrance of the competition area so I could see people coming in. One was CTK, asking me if I'd seen her husband. It was getting near the 10:00 start of play and he wasn't there. I hadn't, and she was worried he had fallen back asleep. Eventually MWS came in, looking weirdly distracted, and I asked him. He said that when he left the hotel room, JTK was ... awake ... and then he shuffled off to his games. So that was weird. I supposed, oh, did JTK do something bizarre like get drunk first thing in the morning? (No, although he and his wife would later drink nearly all a bottle of rum that we had given MWS and he had brought to the convention.) 10:00, the moment when everyone was supposed to start playing, came and he was not there.

10:10. JTK walks up and asks me where he's supposed to go. I had ages ago heard what bank he was supposed to be on, but there was no remembering that. I told him to go to the main desk right now and lead him halfway there. Ten minutes past the start time for a round is when other players can call for a tournament director and get you disqualified. Maybe this would save him that indignity. No: the other players in his group had already asked for a tournament director, and since he was not to be found, he was declared absent and the rest of his group went on without him. He was given zero wins and twelve losses for the round, sinking him. He'd play pretty well the rest of the day, but twelve losses in one round is so hard to recover from. If he'd played that round the way he did the rest of the day he ... well, he'd have been one win short of finals. But that would have been a great place to be.

Well. What about me?

Game of Thrones. Stern, 2016 (for this Limited Edition version). A brand-new code update came out right before Pinburgh that scrambled everybody's knowledge of How To Play. MWS and

bunny_hugger learned to play it at Knoebels; I ... played it without learning anything. Pinburgh's table, it warns us, is set on the older code, so people who haven't had the chance to learn the new will have a fighting chance. It also has the slightly shorter 'Lightning' flippers (called that because they have a lightning-bolt pattern on their tops), making the game a bit harder, mostly because a ball going down the center is harder to stop. Also it warns that it's set to novice mode. Nobody's quite sure what this means. I mean, we understand what it literally means. Game of Thrones starts by having players select a House, one of six from the show. Your selection affects the rules, favoring some strategies over others. Novice mode makes the selection for you: everyone plays House Stark. But even in novice mode, you can choose to start in Regular mode, by holding down a button for three seconds before starting the game. Are we forbidden to do that? Are we allowed to choose that? We decide to play in Regular mode. We'd see other groups choosing to play Novice. Still don't know who's right.

Oh, also there's no ball save, which I learn when I try to soft-plunge, which usually drops the ball to the flippers, and then shoot at the drop targets on the left, which is good for points and lights the outlanes so they'll return the ball into play once. This pretty well wastes my first ball. But everybody has a lousy first ball. The race will be on to start a mode, or a multiball, and it looks like nobody will win. Players three and four do, putting up 42 million and 44 million, scores which would be anemic except on a Pinburgh table. I have 2.3 million points, or less than I probably would have if I hadn't tried soft-plunging and just kept the ball in the pop bumpers at the top of the playfield instead. And yet I have triple the last-place finisher's score, because these games can be brutal. I'm not off to the great round I need.

On to the electromechanical, Williams's 1969 Miss-O. It's a lovely older game, with a pool theme, a horseshoe center target, and tiny flippers that are about 28 feet apart, with a pop bumper in the center. I feel optimistic: this is the kind of weird layout that I always love. It does not love me: I have the worst score of anybody. Pfaugh.

The late-solid-state game. Williams's 1987 Big Guns, another Python Anghelo weird joint. I house ball my first ball. Other people don't do fantastically, but they do well enough that it's hard to catch up. But I watch and I realize something important. There is a skill shot to this game, plunging just hard enough to get the ball to the top of a ramp without letting it rocket down into play. Nobody's good at this. But I watch the score display, which like many for this era, has the player's score blink to indicate they haven't plunged yet. This blinking continues after the ball's gone over the top of the ramp, and until they hit something on the playfield. The implication: if you plunge and drain without hitting the game should give you the ball back for another try. Most Williams games of this era will do that. Even The Addams Family, at the birth of the modern era, will do that. And that's one of my secret strengths for the game. If I plunge and miss the skill shot I can resist the impulse to swing at it, and just let the ball drain and re-try. Combine that with the rather good second ball I'd had and I might pull out a win yet. I plunge, a little too hard. The ball bounces off the flipper, left down, and somehow rebounds to fly over the left kicker into the outlane, flipping a switch and ending my game, in last place.

So at this point? On the early-solid-state 1980 Old Stern Cheetah? A game I know from MJS's pole barn? The best I can do, a first-place finish, would still give me a poor round. I have a great game, one where I keep clearing the sequence of drop targets that are everything in this game, and take first. Everyone agrees, hey, at least I had one good game. This is true, and it's some comfort.

bunny_hugger meanwhile has had a catastrophic round. Her bank, #27, Utterness, put her on Stern's Transformers, the electromechanical Faces, the late solid state F-14 Tomcat, and the original Black Knight. She went 1-11, dropping her record to 33-39 and putting her at 197th of the 200 players in B. Well, 199 players: Lyman F Sheats, pinball designer, had placed in B Division and did not play Friday. He thought it unfair for him to cream mere mortal players like Sean Joseph Grant or Helena Walter Higgins, names that trust me are worthy players. MWS, on bank 46, Yesteryear, has had a great round. Between Family Guy (which he knows in its Shrek pelage), Surfer, Surf N Safari, and Meteor, he's had ten wins, two losses. This lifts his record to 38-34, and moves him from 189th in the division to 41st. The top forty go to playoffs.

Trivia: In Athens of about the fifth century BCE the name of the ninth month of the year was Elaphebolion. Source: Mapping Time: The Calendar and its History, EG Richards.

PS: let's wrap up the parade and peer into the talent show. 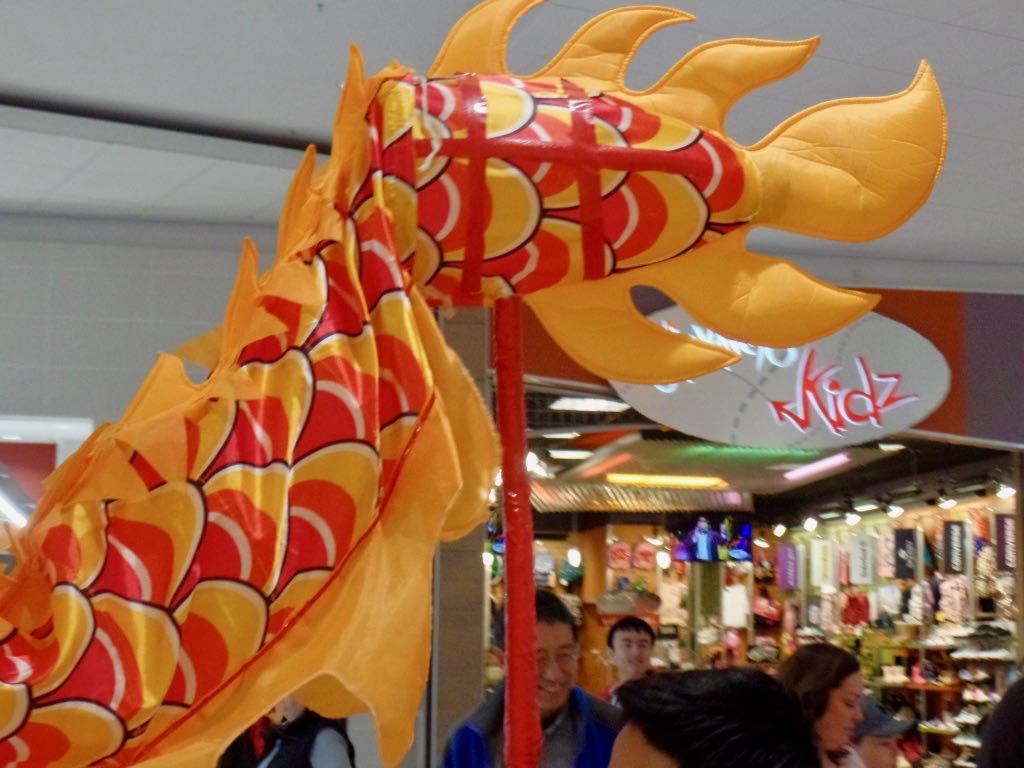 Tail of the dragon, held nicely high up. 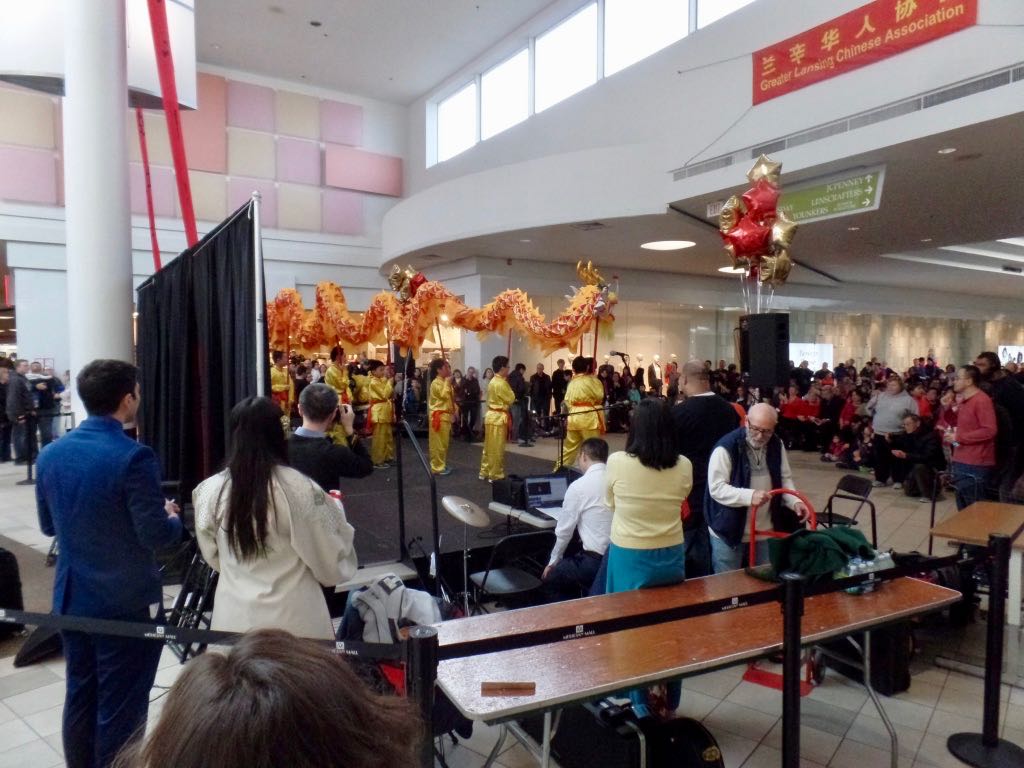 With the parade over the dragon dancers went up on stage to perform for the crowd. 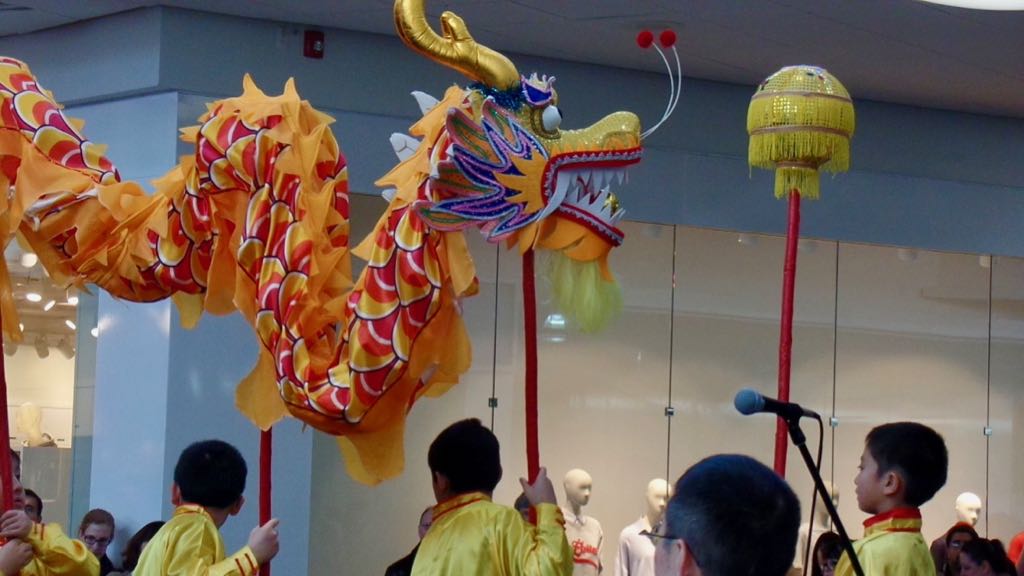 There's that dragon again, pondering whether it could just eat the sun.