And plain to see the facts are changing

Never mind the rest of Michigan Pinball. What did we do Pinburgh Saturday? ... Well, sleep in, for one. Through noon, a much-needed break. We made up for the missed hotel breakfast by teaming up with JTK and CVK for, ultimately, a meal at this fast-Italian/deli place. We'd gone there for Saturday lunch last year too. This time I did not make the foolish mistake of ordering a calzone, so we got to eat in a reasonable time. They also served

bunny_hugger one too many plates of fries --- even the first plate was plenty --- a thing we couldn't account for until another customer went wandering table to table looking for her order of fries. Well, mistakes happen. She didn't mind taking a used plate.

Back at the actual convention we did some browsing around. Some watching of the finals. BIL had already been knocked out of D Division playoffs by the time we got there. The lone FunHouse in tournament play was blocked off, reserved for one of the division finals. This game would frustrate

bunny_hugger: it kept being turned off, or blocked off for special purposes, or sometimes both. The only FunHouse she would play all weekend, on Sunday, was in the free-play area, not one for Pinburgh. We also browsed the vendors tables; there's a lot of people who come to sell vintage video game stuff. If you ever need a program cartridge for the RCA Studio II Home TV Programmer, I know where to go, at least four days of the year. We also looked from afar at an actual fairground ride.

ReplayFX had promised there would be a Ferris wheel in the convention hall this year, and if anyone wanted to buy naming rights they were for sale. Nobody bought naming rights. ReplayFX didn't bring a Ferris wheel anyway. They brought a Rock-O-Plane. It's a fairground ride, first made by the Eyerly Aircraft Company in the late 40s. It resembles a Ferris wheel, with cars going on a vertical wheel. But it's not one. The egg-shaped cages have restraints to hold the rider securely in place. This because the rider can pull a lever inside the car to freeze its position relative to the wheel spoke. This means that the car can roll upside-down as the wheel turns. The rider can relax the lever too, rolling free. As much as they like.

bunny_hugger's never ridden one. I haven't either, to my recollection. It seems ... oh, boy, that's an intimidating ride. We're used to going upside-down in roller coasters, but that's done at speed, inertia guaranteeing our place in the seats. Here, only the padded bars can hold you. We don't ride. Not now, anyway.

We have a pinball tournament to play. ReplayFX hosts a side tournament, the Intergalactic Pinball Tournament. This is Herb-style: you join, you get ten entries to play a bank of (this year) twelve games. Your top four finishes give you a tournament ranking. The top forty(?) finishers go on to a finals on Sunday morning. We join.

The thing is, like, everybody else in the world joined. There are long queues for every table. We aren't forced to stick around waiting for our names to be called. The tournament has virtual queues, so you can check on your web browser roughly how long it'll be until you're up. This has us more loosely tethered to the game bank, but still: we can't just go off somewhere and lose ourselves in the scene. We have to come back every half-hour to an hour.

Last year I had one outstandingly good game in the side tournament and then a bunch of mediocre games. This made me the 187th-ranked player of the 416 who played. This time around? No good games; I end up 510th out of around 600 players.

bunny_hugger has a pretty solid game of Bonebusters, in-between its breakdowns, and this launches her to 358th. MWS has some stuff put together on Fireball and Flip Flop, but he still finishes at 290th.

So I think this is going to be my last Intergalactic. It's nice to have a side tournament. And, if you do have one or two good games, you're mightily well-rewarded with International Flipper Pinball Association points. My 2018 showing, which again was based on one killer game, netted me 4.54 points, which is about as good as I can do playing any given pinball league. But the queues are long, and you can't really play any game enough to feel like you have a chance unless you're someone who could make A Division playoffs. ADM, having missed the A Division playoffs, makes it into Intergalactic, for example. But with all the demands, including that you can't just drop in, play some games, and go back to the convention, I don't think it's worth it for me.

I talk some about going out for revenge games on the tables that I lost unfairly on during Pinburgh, but I don't get around to any. I do get some other play in, including a round on Elektra where I follow the insights

bunny_hugger had had, and have a fantastic game. They also have a Genesis, likely the one I had my glorious playoffs series on two years ago. I give this a try and my lone game is magnificent. I get ready the game's ultimate achievement --- unveiling the Metropolis-style Mara robot --- but don't quite do it. Meanwhile

bunny_hugger uses the Super Orbit that's in the Pinburgh banks --- and that I had played --- to work out strategy that she uses on the Intergalactic bank. Not to help her position, though. Her rather good score on Bonebusters, pretty good Space Invaders and Jackbot, and decent Fire! are where she gets her position.

Another piece of what's fun at ReplayFX this year, and that I haven't mentioned explicitly: they have a much better hangout-and-waiting-around area. It has a small bar, yes, and also a bunch of green carpet and lawn chairs and some lawn games. Cornhole and a giant Jenga block set and all. It's swiftly dubbed the Oasis and it's where Michigan Pinball folks have congregated if they want to step away from the tournament play. At one point some kids take the Jenga blocks and start building fortresses and toy cities and such, mixing the blocks up with other giant blocks there for some reason or other. It's a nice little hangout.

We would hang around, dipping in and out of ReplayFX, until about midnight. About 9 we met up with BIL and JDO and a couple other people, and went to a pizza restaurant just across the street from the pierogie place, while trying to watch the A Division finals on people's phones. The pizza was pretty good, although large and pricy;

bunny_hugger and I split a pie and had plenty. Everyone else got a pizza the same size apiece. They must have not eaten so big or late a lunch.

We did leave about midnight. ReplayFX wasn't closed yet; they'd stay open to about 2 am. The Intergalactic tournament wasn't even done either; in fact, none of us had put in all ten games. But we had a commitment Saturday morning.

Trivia: The Port of Singapore Authority's total assets, on its creation in 1964, including apartment complexes, office buildings, docks, and warehouses, were worth less than US$50 million. Source: The Box: How the Shipping Container Made the World Smaller and the World Economy Bigger, Marc Levinson. 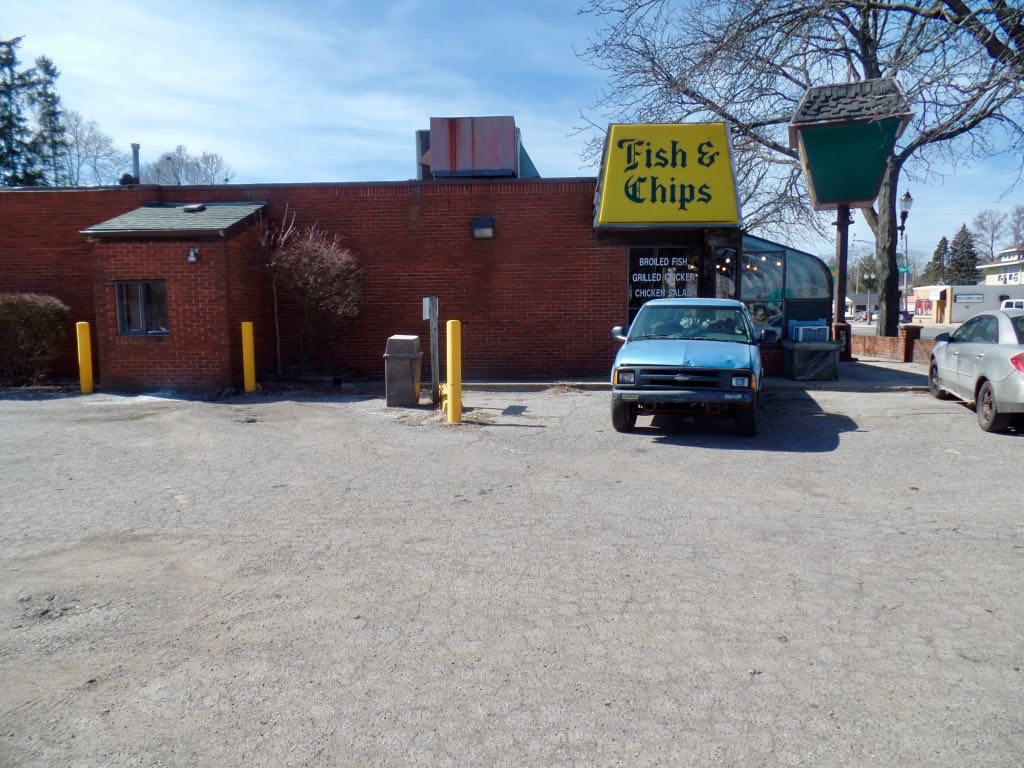 Side view of the restaurant and the parking lot. The sign on the right, with the Fish and Chips logo on two sides, would turn but only with the wind, and was restrained by the tree that's grown around it. 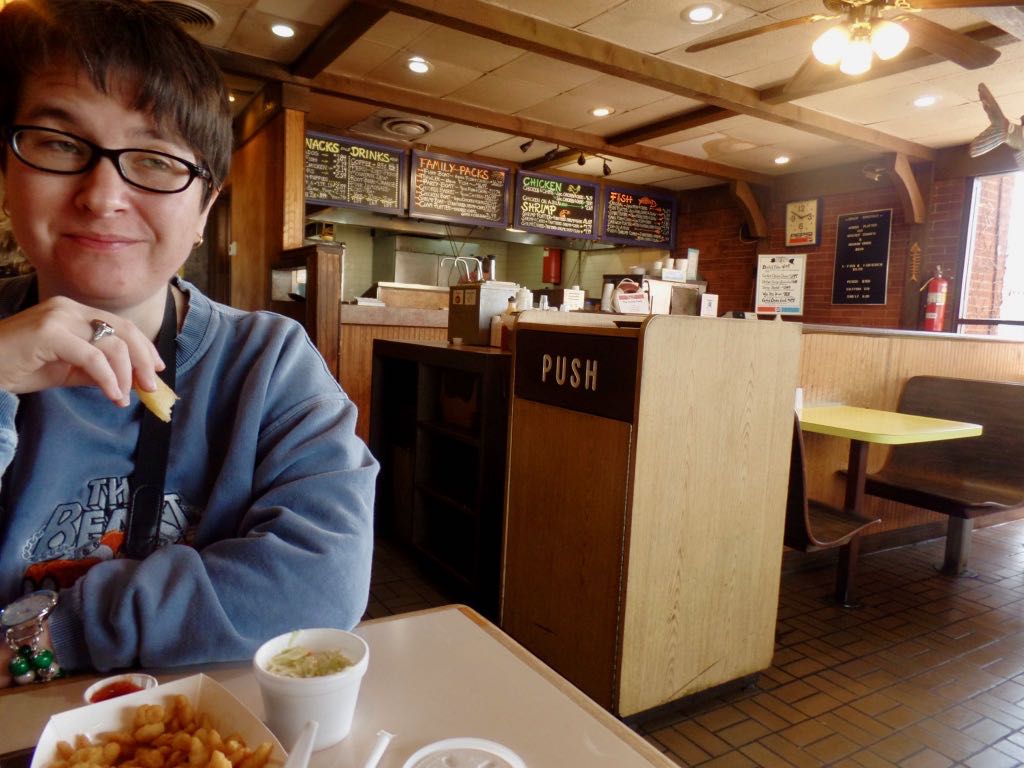 bunny_hugger enjoying a meal, and cole slaw. The main counter and the menu board and the pumps with tartar sauce are visible behind her. 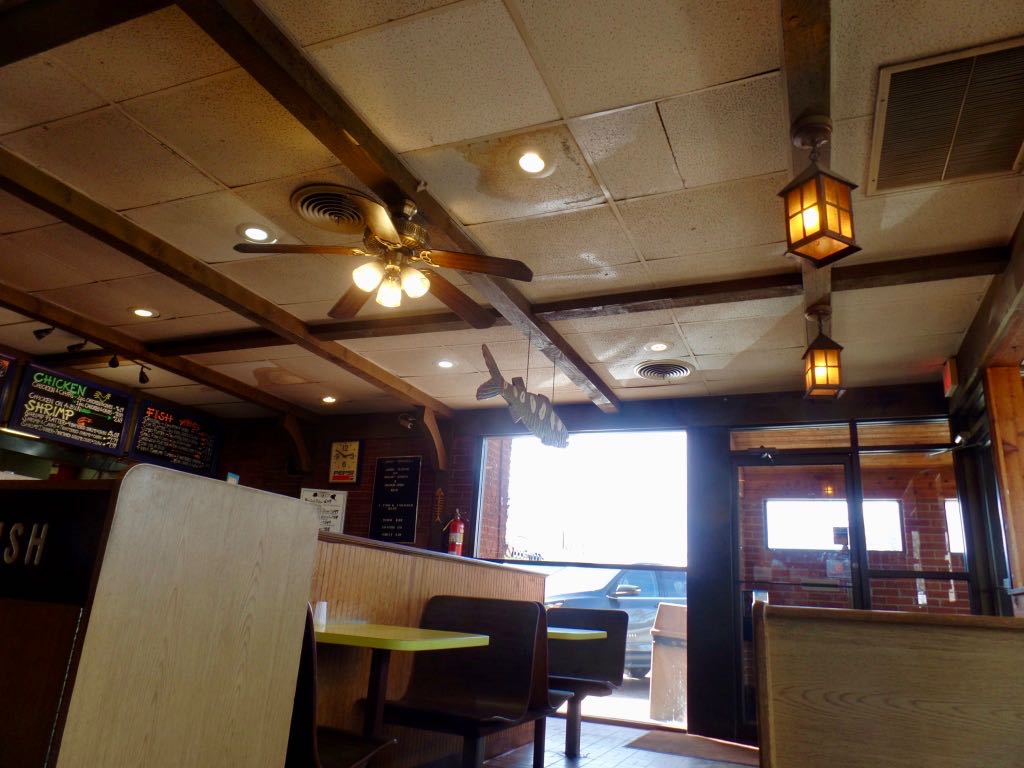 Looking up from our booth at the ceiling, which had seen better days. Fish and Chips had been there since the early 70s, and had been an independent concern since the late 80s.