We met up with MWS, going to Condado Taco for one last visit. It'd also be a convenient way to spend the hour between the end of ReplayFX and the 6:00 hour when we were sure we'd be able to leave the parking garage without having to pay. We did not meet up with JTK or CVK. To our surprise they had left that morning, just after checking out of their room. The interpretation that MWS had was that their cousin had been quite bored with ReplayFX and longed to go home, and between that and only mild interest in our plans, they decided to take off.

Most of Michigan Pinball has left by this time too. CST, apparently, left so early after not making playoffs that he was able to play a tournament in Jackson, Michigan, that Sunday, which he won. Many others have left too. I last saw ADM on-stage as part of the Intergalactic finals, but otherwise people have just evaporated. All right.

Our evening plans were for a starlite admission to Kennywood. Alas, we wouldn't find anyone who could hook us up with cheap tickets; we had to pay the regular price. And this was, JTK and CVK would say, the deciding factor. They didn't want to spend the cost of the evening ticket for just three-or-so hours in the park. All right, but ... you know, leaving the parking garage before 6 pm implies they paid the full price for having parked downtown since Wednesday. Although since the gate was up maybe they just skipped out and trusted the attendant wouldn't care. Hard to say.

So Kennywood! The good news is it's Kennywood. The bad news is: MWS would not get his 100th roller coaster credit here. Their newest roller coaster, Steel Curtain, was closed. New roller coasters often have some shakedown period where operations need time to sort out. This weekend would be one of them. MWS was still up for going, just disappointed that he couldn't get his milestone here, and didn't know when he would be able to get it.

We would get to Kennywood late enough in the day we could park in the Preferred lot without paying the $7 they'd prefer. There's still free parking, it's just farther away. And we went right away to Sky Rocket, their linear induction motor coaster up front. The ride had been down most of 2018. It had the great indignity of reopening after several months being out of order only to suffer a fire that knocked it out the rest of the season, and I got to wondering if the ride would be taken out. Since it was running, even though there was a bit of a line, we all figured we should ride in case this was our last chance.

We did look at Steel Curtain, which is a giant coaster that dominates the park skyline, and that reaches over the central lagoon. Not enough to obstruct the picture we always take, from the bridge and looking at the Racer and Jackrabbit roller coasters. But still, it changes a lot of what the park looks like.

Kennywood would be open only until 10:00, so we had to get in our must-do things quickly. One was getting the chocolate-dipped square ice cream cones which we've learned were called ``Balboa ice creams'' back when everywhere had them. Getting a ride on the antique carousel, and also pictures that

bunny_hugger could use for her homemade 2020 calendar. She likes to make her own calendar with pictures of the carousels she's ridden the past year. Riding on the Turtle, the tumble bug ride, which we did just far enough into twilight that I saw a small rabbit sitting up and hanging around the grass outside the ride. I did my level best to point out where it was to

bunny_hugger and MWS, but that's a hard thing to point out over the noise of a ride that is, after all, tossing you back and forth as it goes along a waving circular track.

I thought of something MWS had never ridden before. This was the Bayern Kurve, a ride that could arguably be considered a powered roller coaster, although few try to make the argument. It's a bobsled-type ride on an inclined circular track, with cars that tilt down into the curve and, when the ride is at maximum speed, a loud blaring horn.

bunny_hugger and I hadn't been on it in years and both were up for this ride.

This grew into a slight fiasco. We were let on with a bunch of other people, of course, some of them a pack of kids who kept running back and forth trying to get into cars, always whatever one the three of us were heading towards. They also got in three separate cars, though any two of them could have fit together. MWS,

bunny_hugger, and I could not share a car. We looked at trying it and, no. In short, they let enough people in that we couldn't all get on the same ride, so I went back to the queue and waited for the next ride. I liked the Bayern Kurve. I get the sense MWS was not such a fan. But MWS and

bunny_hugger did observe that among the people in the painted-mural backdrop of the ride was The Cat In The Hat. Also Elvis.

The ride we spent the longest time waiting for was the one I insisted on riding. I didn't have to overcome much resistance. It was Jackrabbit, their oldest roller coaster, dating to 1920. This would always be a choice ride, but I had a particular reason to ride it: I was wearing the Jackrabbit T-shirt I'd gotten at Seabreeze. That other Jackrabbit roller coaster ... also dates to 1920. If any of the ride operators noticed they didn't say anything. We did notice that their ride photos booth no longer had the old sample photo, showing an elderly couple who did not seem to be enjoying the ride. Too bad.

When we first arrived at Kennywood I'd seen a train on The Phantom's Revenge, their (previously) tallest steel roller coaster. It seemed to me it spent a very long time at the top of the lift hill before going. And then the trains stopped going on it. The ride wouldn't run nearly the whole evening and so we went a second year without riding it. Also, and I don't know that this is related, but while we were walking past the Bayern Kurve I saw some EMT types rolling a cart in the general direction of Phantom's Revenge. However, they didn't seem to be hurrying, and there is a lot of park that can be described as in the general direction of Phantom's Revenge. That's the roller coaster which has its entrance a crazy distance from the platform and the exit, just like you get when you're an inexperienced Roller Coaster Tycoon builder and forgot you have to have entrance and exit paths.

We did go over to the Steelers Country area, the new themed area of Kennywood, but found it entirely blocked off; it wasn't just Steel Curtain that was closed. So, we got our photo from the bridge of the lake and the Racer and the Jackrabbit roller coasters. And a nighttime ride on the carousel before going to Thunderbolt for a night ride. Thunderbolt does not permit single riders, and with good reason: it has a lot of helixes and turns that would let a lone rider slide dangerously far. Our train was held up dispatching a while before the ride operators could find someone who'd accept the offer of two rides on Thunderbolt if they'd just take one sitting next to MWS. MWS is not such a fearsome person that you should avoid riding next to him on a roller coaster, I do want to make clear.

After that and our turtle ride we have maybe fifteen minutes left in the night. MWS suggested we at least see if Exterminator was still open. Kennywood closes ride queues before the park closes, in the hopes of getting the last riders off pretty close to closing. Exterminator always gets the longest lines in the park; it's a spinning wild mouse coaster, with a fairly low capacity, but the ride, with its dark ride-type attractions is always popular too. So we went over, expecting to be turned away, and found ... huh. The ride was still open. And it had almost nobody in line. We did not walk on to Exterminator --- such a thing is impossible --- but we did wait under five minutes which is incredible. We were not quite the last riders, but we were near that.

And then it was 10:00 and Kennywood was closed, and the rides got around to turning off the lights as we walked the long way back to the front of the park. As always, I leapt up and tapped the giant valentine-heart light over the exit tunnel, the one that says 'Goodnight', and we thought of when we would get back.

This short couple hours at Kennywood was the end of our doing things for the Pinburgh trip.

Trivia: In 1577 English merchant John Hawkins proposed (to the English crown) carrying a cargo including ``40 tonnes of Brazil dye-wood called Pernambuco'', valued at £600 to the Ottoman Sultan. This, and the other £6,400 worth of trade goods, were contraband according to the papacy. Source: Worldly Goods: A New History of the Renaissance, Lisa Jardine.

PS: In Our Time podcast repeated its Emmy Noether episode, just a heads-up for people who like pop mathematics.

PPS: More exploring the mystery of why Theio's had closed and when and if it might reopen. 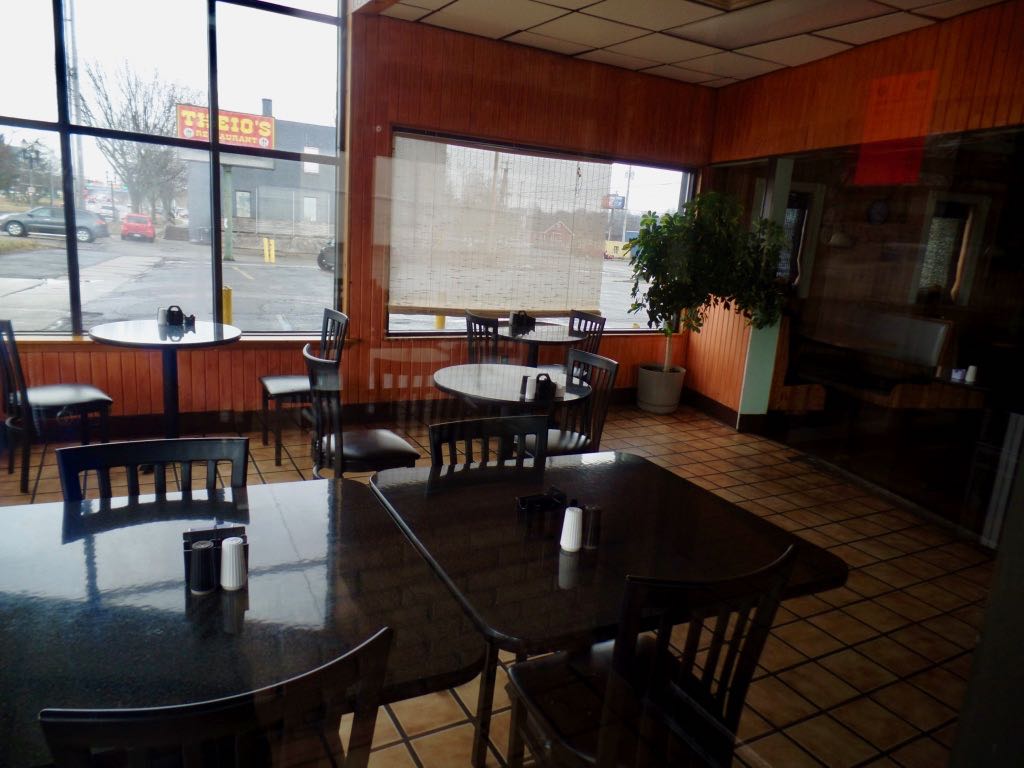 Peering through the glass windows of Theio's. This is one of the wings where the pinball league afterparty would regularly be, although there would normally be those little baskets with miscellaneous fruit jam flavors in them, and JTK or someone would go roaming across tables looking for the good flavors. 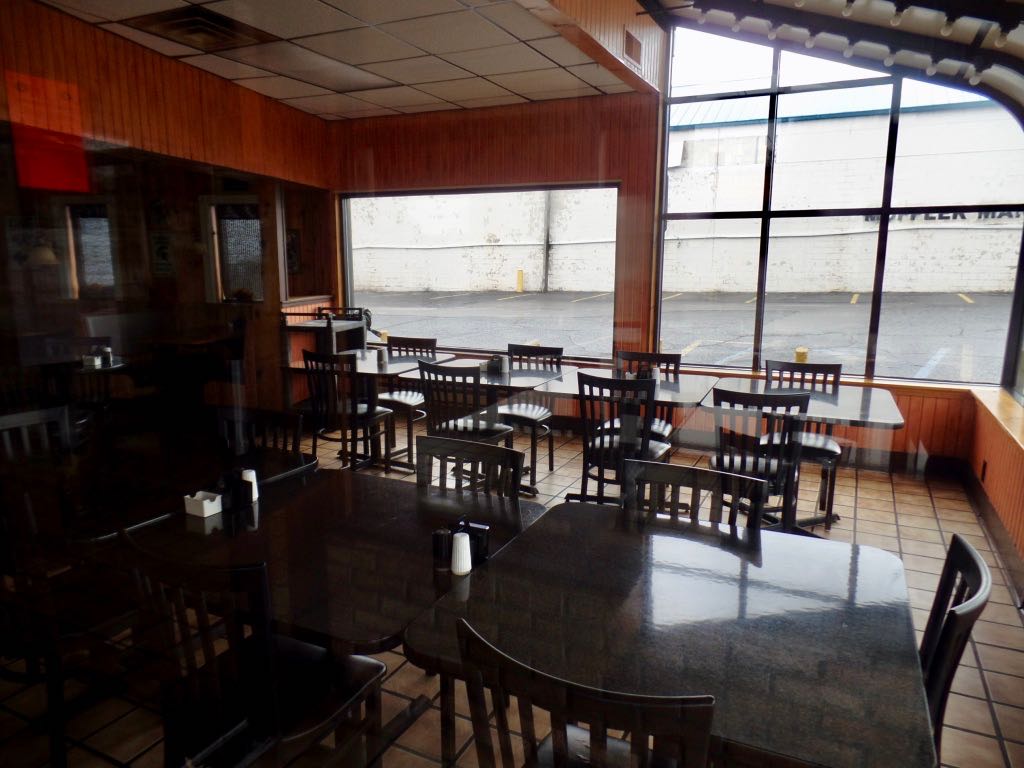 The other front wing of Theio's, and other place where the pinball league afterparty would be. I believe this is where the league was sitting the time JTK discovered that his eyeglasses had gouged these small ridges in the flesh of his skull. Yes, that's the Muffler Man in the background there. 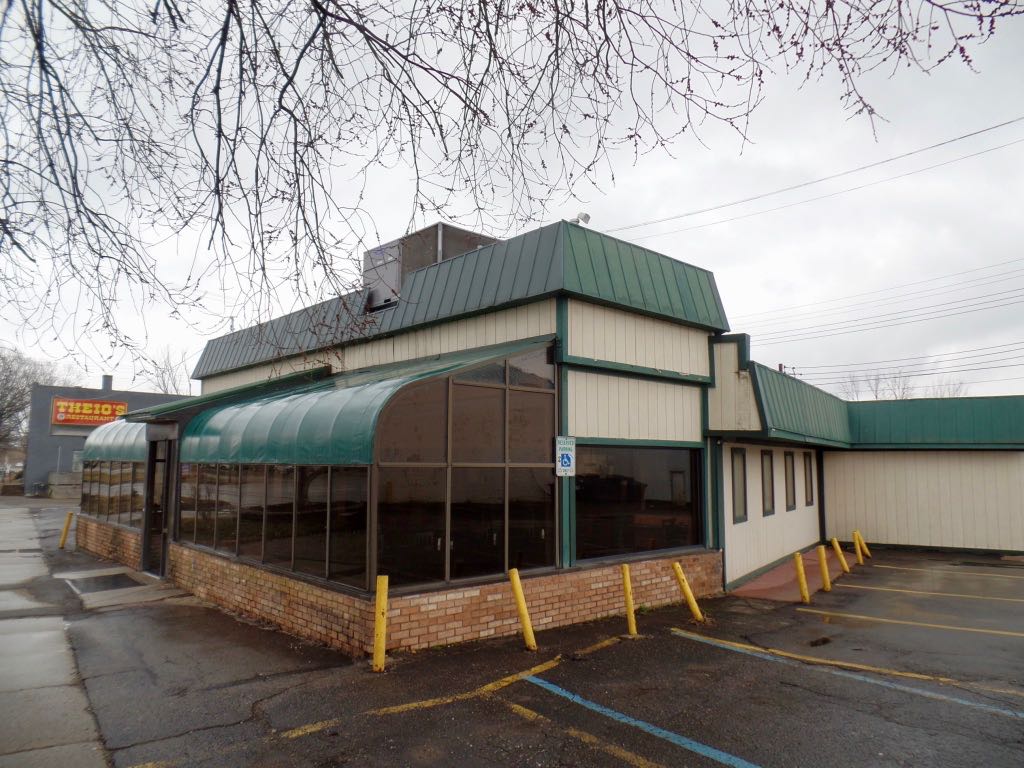 Theio's, seen from the outside. Well, you know, that all doesn't really look like too bad a place. Surely the fire department just needs a couple critical, yes, but minor repairs to be done before the place can ... [ To be concluded ]