Surely, we said it was March the 10th

It's humor blog recap day, so if it's not already on your friends page or your RSS feed here's your chance to catch up. Thanks.

With my Pinburgh 2019 trip report at last completed I'm sure you've heard enough about pinball tournaments for a while. Here's a bunch of pictures connected to the 2018 March Hare Madness, the charity pinball tournament which raises money for the rabbit rescue from which we got Stephen and Penelope. It's named in Stephen's honor; at the time of these pictures, we were still merely fostering Penelope for a month and we had no reason to think anything was wrong with her other than that she was cranky and wanted to punch

This was the last year that the tournament used the Amazing Race format. In Amazing Race, everyone plays a string of tables, with whoever gets the lowest score being eliminated. The last four people not eliminated then play head-to-head, because the International Flipper Pinball Association does not consider it a tournament if there's no head-to-head play. It barely regards Amazing Race formats as worth anything either: they really want people to play complete games against other players directly. In the Amazing Race format it's theoretically possible for only one person, each table, to play a full game; everyone else can play a single ball (and, often, will). So the format is bad for getting ranking points. And the games at our venue since went up to 75 cents or a dollar each, and that's just too much when so many people will play so little on any one game. 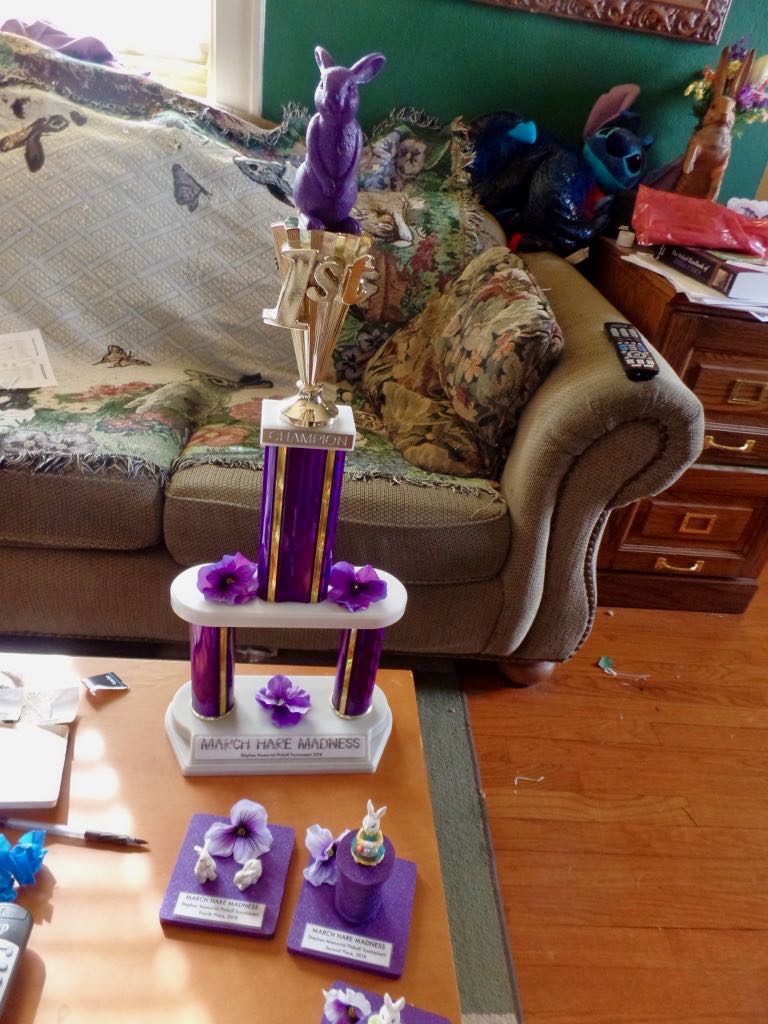 Trophies for March Hare Madness. The tall one was rebuilt from one that GRV donated; being oversized is part of the fun of the thing. The others are wood blocks bought at Michael's and painted. 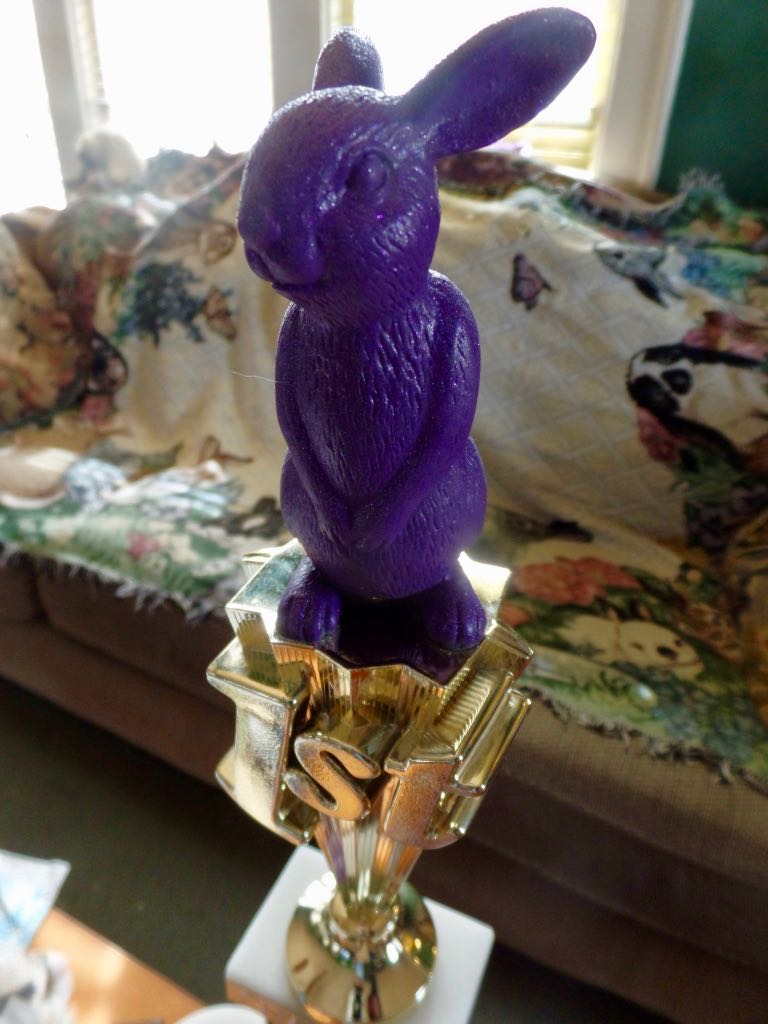 Looking close at the rabbit set atop the former GRV trophy. The bunny figure was bought shortly after Easter at some cheap knick-knacks shop and painted purple, coming out far better than 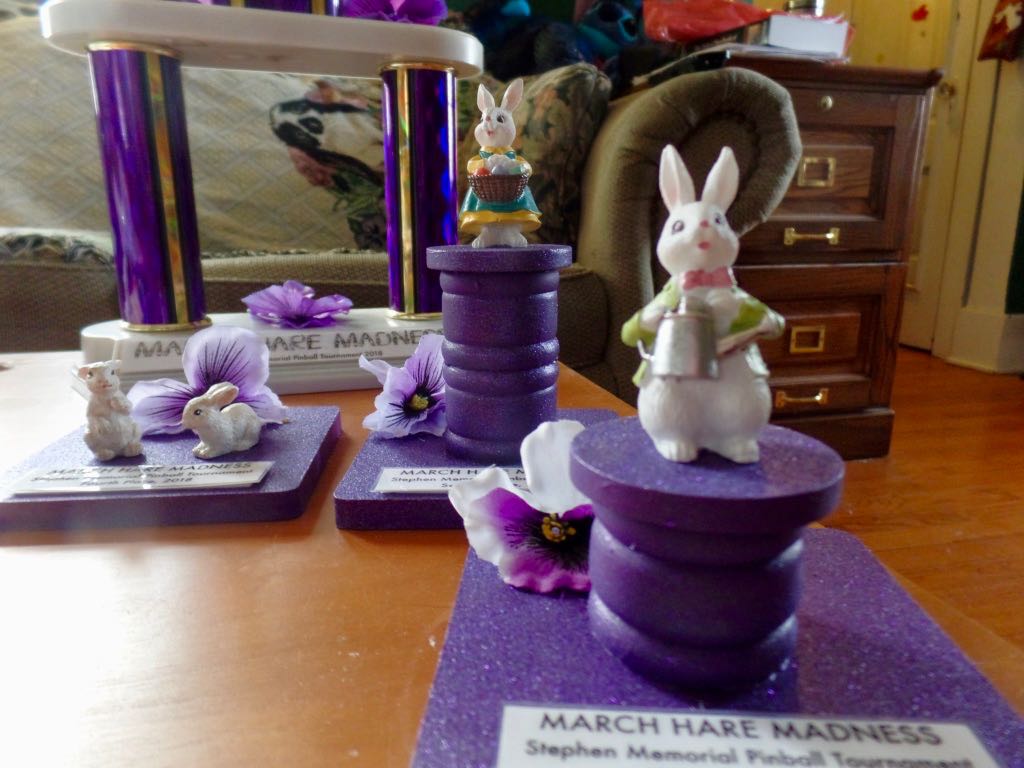 And the view of the trophies for second, third, and fourth place. 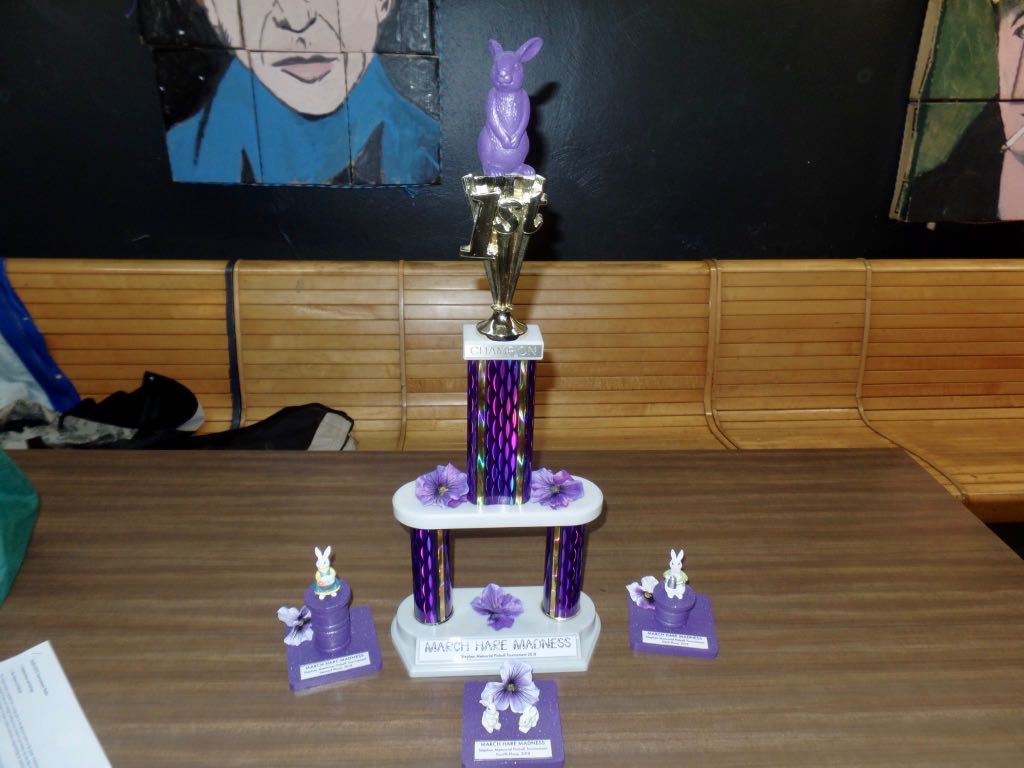 The trophies put on display at the hipster bar. To the left you can see the pages with the official rules that I think nobody has ever consulted. 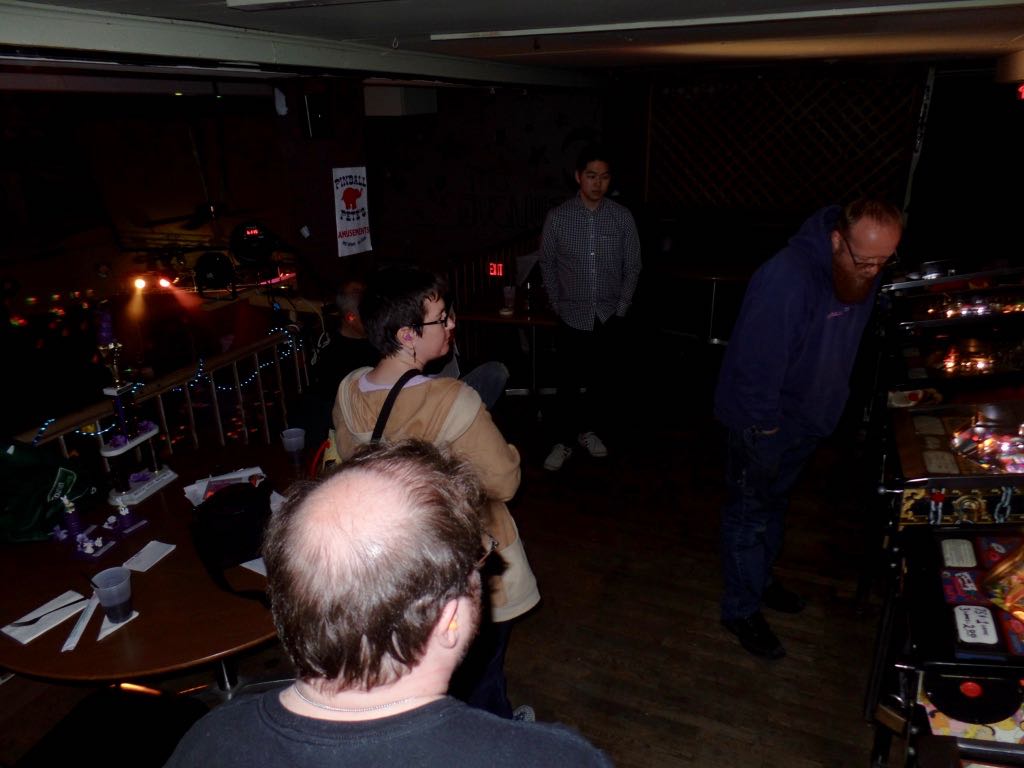 bunny_hugger was one of the final four competitors and so went into the three-game playoff knowing she'd bring home one of these memorial trophies. 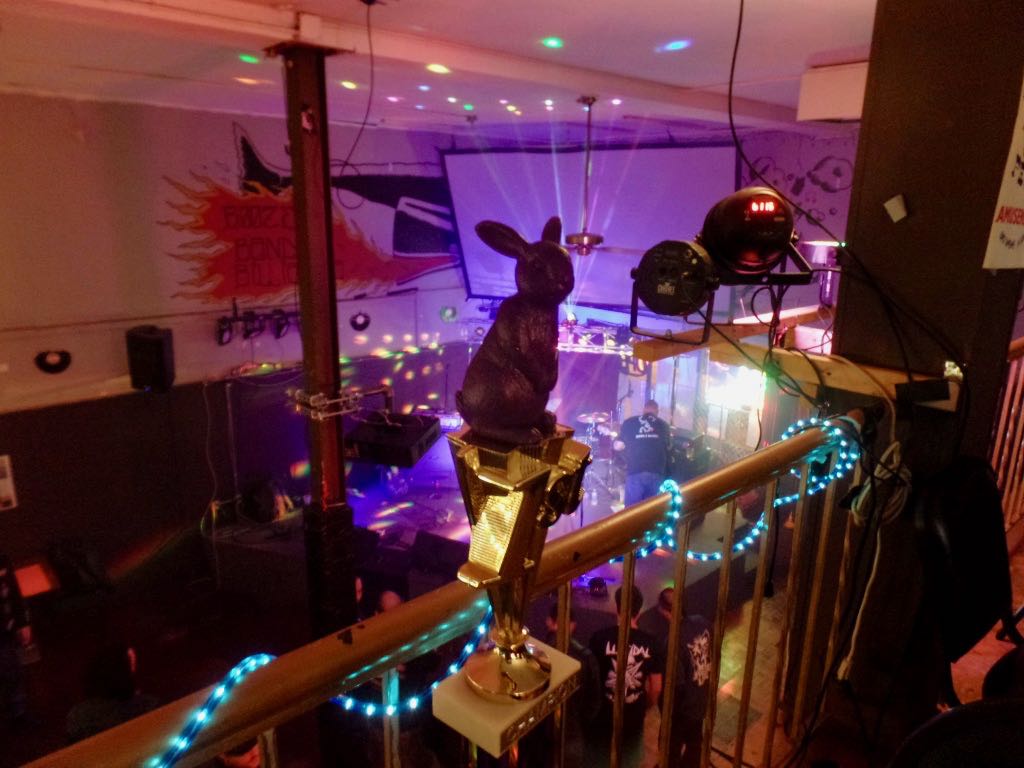 So the bar scheduled a punk band to play the same night as the tournament and that was a bit inconvenient. But it offered this nice backdrop for the tournament too. 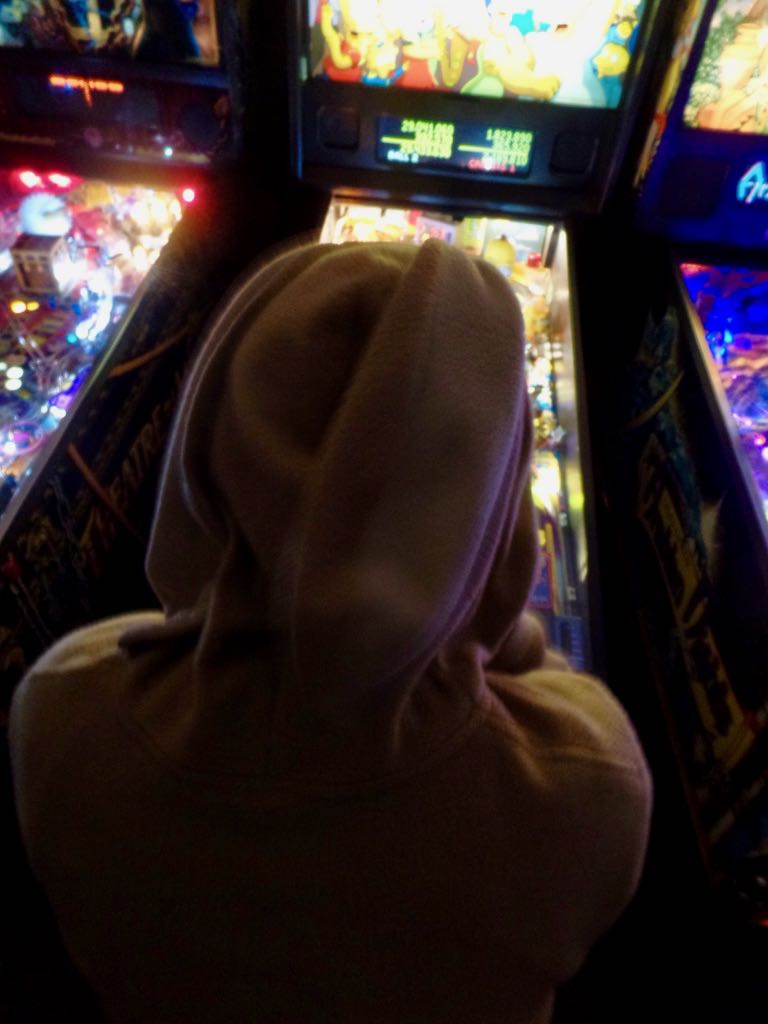 bunny_hugger pulling her rabbit hoodie up over her head, so you know she's serious about this game of The Simpsons Pinball Party. She would earn third place in the tournament.

Trivia: Archbishop James Ussher's selection of the 23rd of October for the date on which God willed the world into existence placed the date at what would have been, for the year 4004 BC, the first Sunday after the Autumnal equinox. Source: Marking Time: The Epic Quest to Invent the Perfect Calendar, Duncan Steel.

Currently Reading: Little Orphan Annie Volume One: Will Tomorrow Ever Come? The Complete Daily Comics 1924 - 1927, Harold Gray. Editor Dean Mullaney. Wait wait wait wait wait wait wait. In this bit Oliver Warbucks's first wife disappears when the yacht they're cruising on sinks in a storm in the South Sea Islands? Dick Tracy has been making a deal about how his second wife disappeared while they were at sea. What's going on here? (Granting that I don't know that his first wife didn't return from the dead but wow.) Now his first wife wasn't presented as being troublesome ... anymore ... although they had an established history of quarreling over, basically, the adjustment to being wealthy and while she had now come around to liking Annie and not wanting to seek status their problems were all resolved ... publicly. But two wives lost at sea, and this after several years showing Warbucks is very willing to take the direct if violent answer to a problem? This does happen right after Warbucks literally kidnaps one of the world's leading surgeons, and gets away with it, after all. (I'd wonder whether the Dick Tracy writers made a mistake and conflated the wives, or were shifting character traits around to set up a better story, but I don't think they think that way.)

PS: My 2019 Mathematics A To Z: Differential Equations, another essay I figured would be like 700 words and that WordPress counted as 2,136. (That includes some boilerplate stuff like the banner art and its supporting text but still.)