JMA and his father, DAD, hold the occasional pinball tournament in their home. JMA specifically invited me to attend when we were at Marvin's league and I did not realize that my ``oh, yes, that sounds quite interesting'' response would commit us to attending. It didn't really, but

bunny_hugger felt pushed to attend more than she really wanted. MWS, similarly invited by JMA, also felt a bit like he couldn't turn the invitation down, especially after true yet implausible problems kept him away from previous tournaments.

The tournament would be eight rounds of match play, four players in each group. The top eight players would go on to finals in the A Division. The next four players, to B Division. Well, with restrictions. People in the IFPA's top thousand ranking, like me, would play in A Division or not at all.

It started great for me, with a carefully-played first-place win on Iron Man.

bunny_hugger had a crushingly good first-place game on Robocop, a late solid state based on exactly what you'd think. And MWS had to play the Beatles, a game he hates, and came in last, an outcome he hates. Next round

bunny_hugger and I would play in the same group, an outcome everyone else finds every funny. And on Beatles, a game the both of us like. She earned first place; I settled for second. I would go on to keep dropping, getting a third and then a fourth place finish before. Finally in the fifth round, playing Indianapolis 500 and against

bunny_hugger again I got back to a first place finish. She got second. After she had started the day with two first-place finishes everything else felt rotten and disappointing.

Ah, but. In the end? She did do pretty well. In the last four rounds she had a first place, two second place, and one third-place finish. She finished regular play tied for fourth place with MWS, and they would go to play A Division. Me, I finished in ninth place, so I would ... not play in B Division, because I was restricted. I could play A, or not at all. MWS's come-from-behind finish in the last round, on Tommy --- against me --- knocked me out of all playoff positions, and didn't even get him into it.

A Division finals were two rounds of three games each, with four players.

In the second round of playoffs

bunny_hugger had it harder, although not so bad as she feared. She had nothing much the first two games. But the last one was on Spanish Eyes, an electromechanical with a wild and fun twist. It has small flippers, common for an old-fashioned game. They're far apart, again common. Also between the flippers is a pop bumper, and some kickers, so that it's quite possible for a ball that's gone past your flippers to keep scoring points and even maybe pop back into play, if you're ready for it and haven't done something stupid like hit the flippers in frustration so the ball can drain anyway.

bunny_hugger, as is her wont, chose to go first on the single-player electromechanical game. And she didn't just have a good game. She had a fantastic game. She had a game that just would not stop, and she came within a whisker of rolling the scoring reels. It's not just a fantastic finish; it's one that ices out the other players, including past state champion AND and plausible future state champion JMA.

The finish puts her in a tie with JMA for second-or-third. So they play a tiebreaker, on Tommy. She's had good games of Tommy, and this one isn't bad. But it's not close to JMA's game. She ends up taking third place in the tournament. Which is a not bad finish. It's good for her third-highest (to this date) bounty of IFPA points this year. She's been struggling to qualify for the state championship and this one day has gotten her a good chunk of the way to range.

As the night sets in it starts to rain. We all scrambled to move stuff in to the crowded garage used for the tournament.

The B Division trophy is a recycled trophy from another tournament. It's common to recycle trophies, especially for minor tournaments like this. But this one becomes a delight for its chintziness: the trophy is literally that of an earlier tournament, except with 'B Division' printed out on a label and pasted over whatever the older label was. The A Division trophy is a bigger and ore respectable one, although this one has been passed around between AND and JMA and one or two other people. Each tournament they add some more baubles to the thing. This is making it gaudy, in an endearing way. It's got a little Koosh-ball toy monster, and a glittery disco ball, and a miniature cardboard replica of the Iron Man backglass, and a folded up flyer for the Beatles pinball game. It's ugly, yes, but it embraces its ugliness, in a way that gives it glamor. Would have been great to take it home, but where would we have put it?

Trivia: The first uses of ``satellite'' in English, in 1548, use it to refer to a bodyguard. Source: Semantic Antics: How and Why Words Change Meaning, Sol Steinmetz.

Currently Reading: 100 Years of American Newspaper Comics, Editor Maurice Horn. Ah, yes, the entry for Calvin and Hobbes brings back fond memories of some of Calvin's best recurring flights of fantasy, of his time being Spaceman Spiff or ... uh ... Safari Al (?) (???) (??). (It's the name Calvin gives himself in one [1] comic strip, where he's wearing a pith helmet and chopping through the jungle that's in reality his room. The Calvin and Hobbes wiki allows that perhaps other times that Calvin tromps around wearing his pith helmet he's extending that character although he never says the name again.)

PS: Exploiting My A-To-Z Archives: Dedekind Domain, an essay which I learned some important things writing. 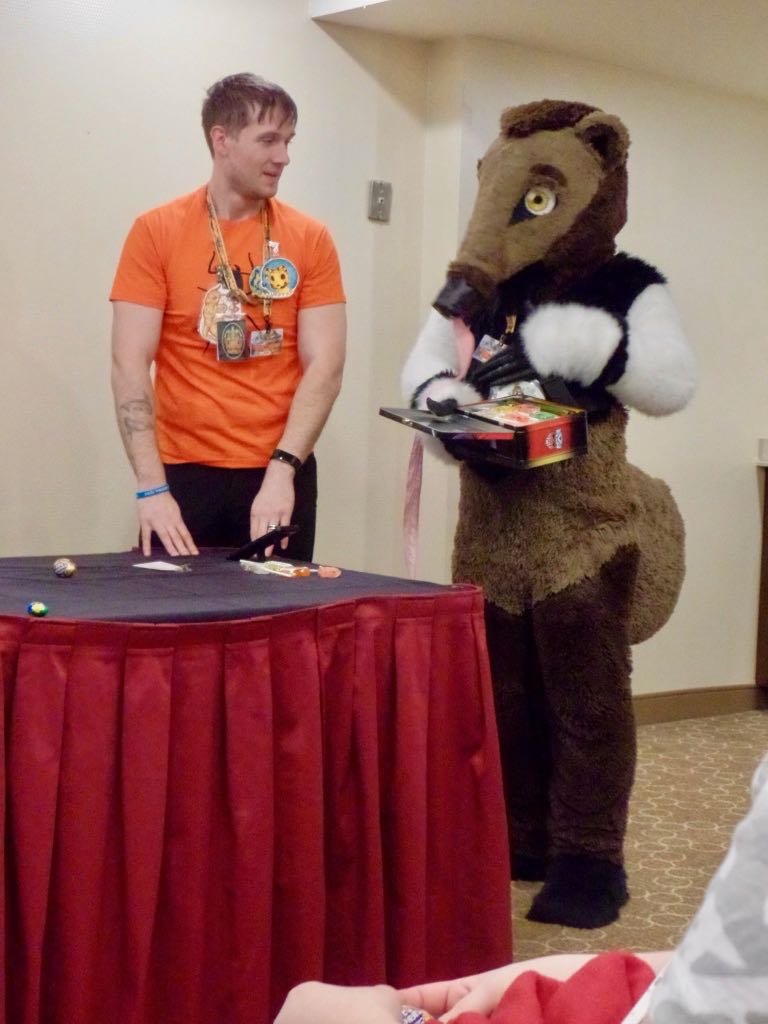 An intruder at the insects sig! Yes, it's an anteater, as would inevitably happen. 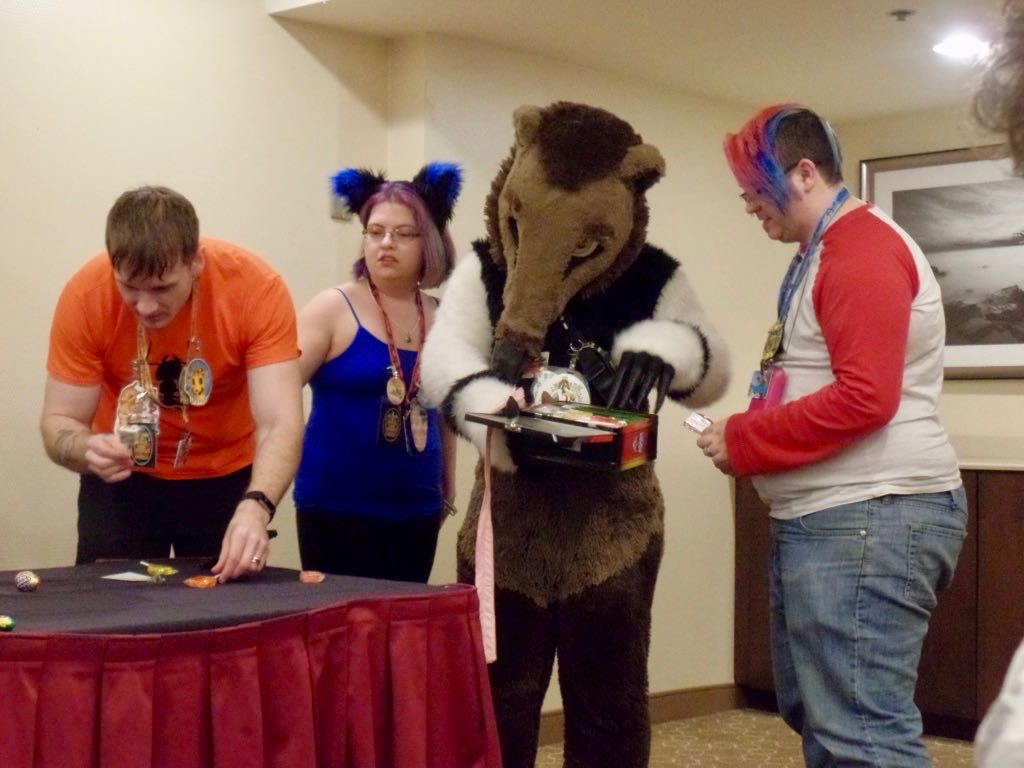 The SIG came with a bunch of insect-bearing candies which, of course, the anteater got to first. I'm personally not thrilled by the idea of, like, a fly inside a lollipop. 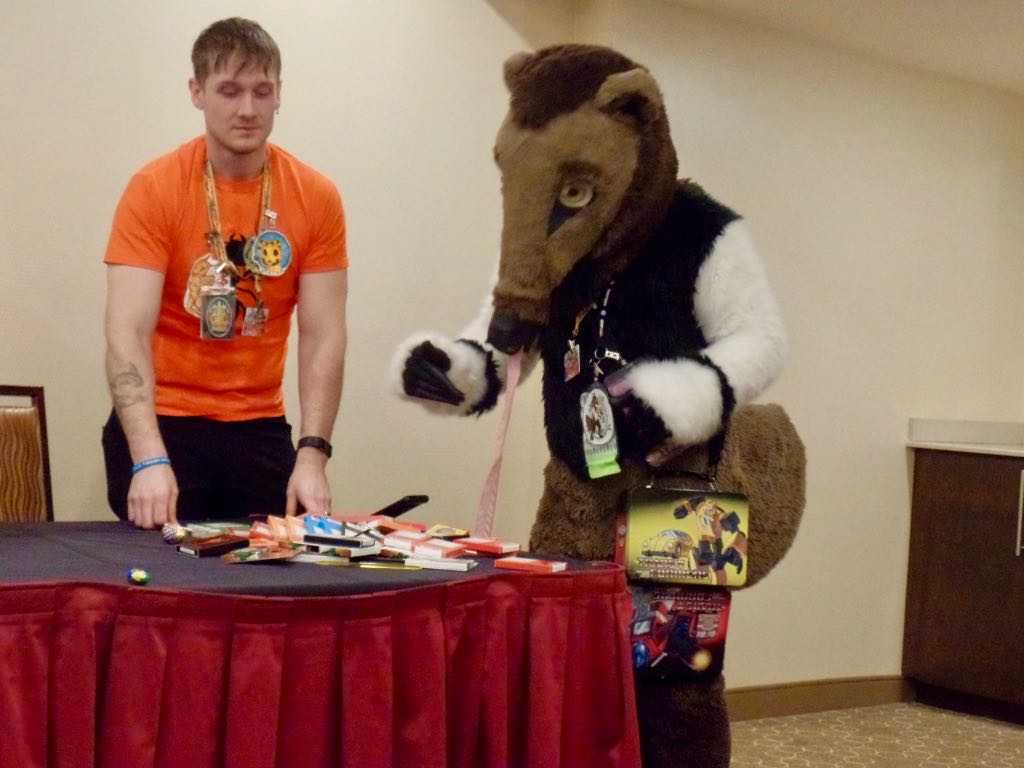 The anteater has quite the tongue and while you could see it in earlier pictures, this one really shows it off. I think the tongue was designed to be able to hold ant toys stitched to it, too, but they're not visible here if they were attached.