Each year we don't get to Michigan's Adventure enough. This year we planned for an early-season visit, upstaged by making a very early-season visit to Cedar Point. June we were busy with among other things our Niagara Falls trip. July, Pinburgh. We kept thinking it would be easy after a Fremont pinball tournament day to pop over to Michigan's Adventure, taking in a couple hours before close. But we started carpooling to Fremont, with people like MWS and JB and RED. This is good for our car mileage and a friendly thing to do, but it's rude just to ditch someone. For the Baby Food Festival after we were both knocked out, we were ready to go over to the amusement park, spend a couple hours, and then come back for our companions who were still alive. But a heavy storm had blown through and closed the park. In the early-August Fremont tournament, after our play had ended ---

bunny_hugger was knocked out in the first round; I made it to the second round, to her annoyance --- we went to the park, arriving at 9 pm which it turned out was the park's closing hour. Finally we accepted we would just have to make a specific trip for the park. This we did the day before

bunny_hugger's first school meeting of the year. We set out, first dropping off her laptop at the computer shop from which it would ultimately be stolen. But we would never have guessed that a plausible problem, then.

Between our late start and the park's 7 pm closing hour we'd only have about three and a half hours. But that can be enough, if the park isn't crazily packed. It wasn't, either. The lines were all tolerably short. And the Mad Mouse was running, just fine, which was great to see after the many down times it suffered in 2018. We even arrived in that rare moment when there wasn't a line, despite the ride's slow loading process these days. Wolverine Wildcat, the near-clone of Knoebels's Phoenix, is still less fun than Phoenix and it's hard to pin down just why. But also parts of one of its hill had new wood, and the result was a bit different. We thought it rode rougher, with even less air time; commenters online talked about how it rode better, with more air time. This seems to depend rather much on which row you ride in. Shivering Timbers, the tallest and longest coaster at the park, was riding quite rough and we weren't sure we would want more than the two rides we took on it.

Part of our joy at the park is always seeing wildlife. In the petting zoo, yes, where they had a larger and better enclosure for their rabbits at last. They're now placed underneath the elevated part of the goat enclosure, so there's natural shade. And there's a table/seat in the center, that the rabbits can hide underneath. They also had an electric fan stirring the hot air. One rabbit wedged herself behind that fan and didn't want to move for anything. The other two rabbits were willing sometimes to come out where they could be touched. A huge white Flemish giant went about occasionally grooming the pen-mates, and sometimes letting people admire her enormity. The other rabbit, I think an angora but with short, curly wooly fur, often kept near the outer edge of the pen. One kid watching said this bunny, who looked like a sheep or possibly a wizard, was ``the wise bunny''.

Maybe so, but in petting the wise bunny

bunny_hugger came to worry. She thought the rabbit felt skinny, even bony. She later left comments with both Michigan's Adventure and the farm that actually keeps the animals expressing her concerns. And she was perhaps listened to. When we revisited the park the wise bunny was there, but shorn further, as would be needed to examine her well.

We also saw wild bunnies. I was primed to watch for them, after we discovered rabbits grazing the Corkscrew roller coaster infield. This time we saw them in the lawn that used to be a go-kart track, near the lagoon, and we spent a fair while watching and photographing. While admiring these rabbits --- one adult and one juvenile --- we overheard a pack of people talking about oh yeah, rabbits, that's cool.

bunny_hugger thought they were mocking us for ignoring the rides in favor of some cottontails. Maybe they were. Hey, they were rushing over to Thunderhawk to get their heads battered by the roller coaster's restraints. We saw a fledgling bunny eating instead.

Also in park nature: geese and swans. These were nestled in near the lagoon, just off Wolverine Wildcat, and around a great messy field of feathers.

Each year we wonder what in the park might be removed the next year. Michigan's Adventure hasn't had any major new rides since 2008 when Thunderhawk moved from Geauga Lake to here. It's had minor things added, including the petting zoo. We keep thinking some of the kids rides will go. So we were startled to find something not just doomed, but already partway demolished with a sign about it being the future site of a new attraction.

This was Be-Bop Boulevard. It was a cars ride, and

bunny_hugger believes it was the last ride purchased by the family that owned the park before Cedar Fair, the park chain, took the place over. It wasn't a very interesting car ride; we only sometimes rode it. But the whole ride ran at a uniform pace; the rider didn't control car speed, and steering is only nominally something you do. The scenery wasn't all that much either; a couple of billboards and that was about all. But we were startled to see the whole track torn up, and the station taken apart.

Taking its place is to be a Camp Snoopy. Most Cedar Fair-owned parks have a Camp Snoopy, since they've got the Peanuts license. Michigan's Adventure hasn't been that tightly organized or themed. The illustrations of the new park area look nice enough. And as far as we could tell, they seemed to be leaving most of the trees from the Be-Bop Boulevard ride up. Michigan's Adventure sorely needs shaded areas. It'll be good if they are able to save as many of the trees as possible.

For all our worries about time we had enough of it. We got to everything we hoped to do and were able to linger at sights like cottontail rabbits and the absent Be-Bop Boulevard. And we got a bag of kettle corn to eat on the ride home.

Next year we need to get to Michigan's Adventure early in the year, and more often.

Trivia: The last check drawn on the East India Stock Dividend Account was honored by the Bank of England in 1884. Source: The Honourable Company: A History of the English East India Company, John Keay.

PS: I Ask For The Second Topics For My Fall 2019 Mathematics A-to-Z, an open thread, I hope.

PPS: Closing out with the Motor City Fur[ry] Con Friday Dance. Not so many pictures this time, I guess ... I wasn't trying to get my camera to deal with the low light? I was like three months away from discovering the low-light mode on my camera. 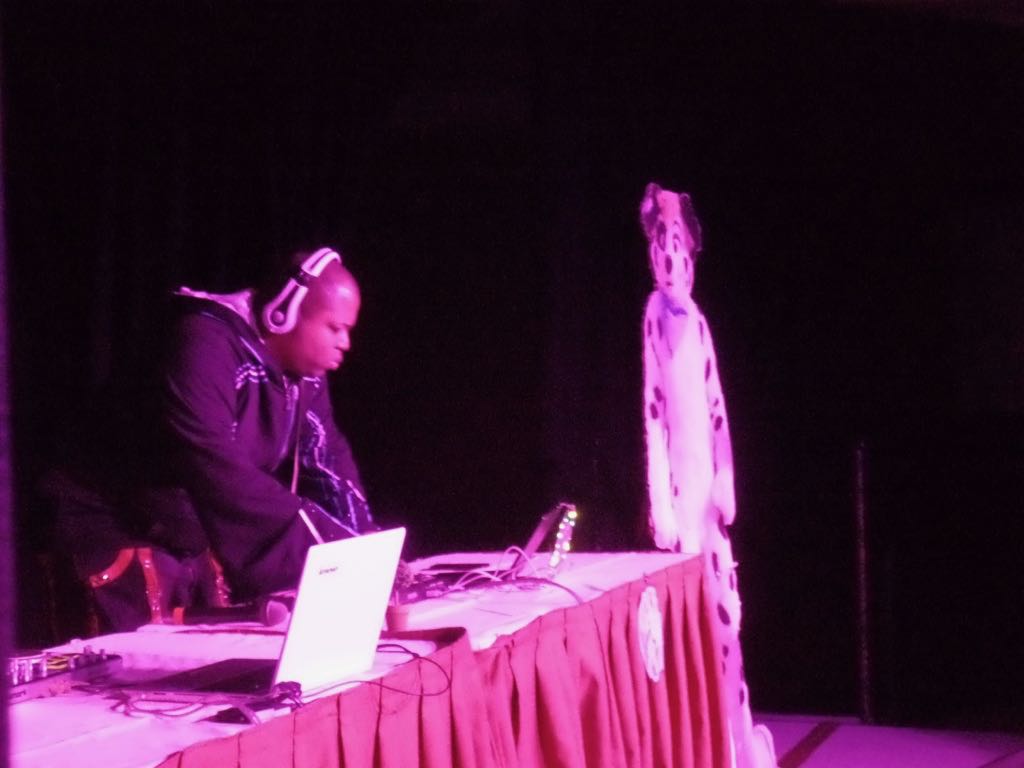 And here's the dance. The DJ and a cardboard standee of ... I don't know if it's his character or just an icon. 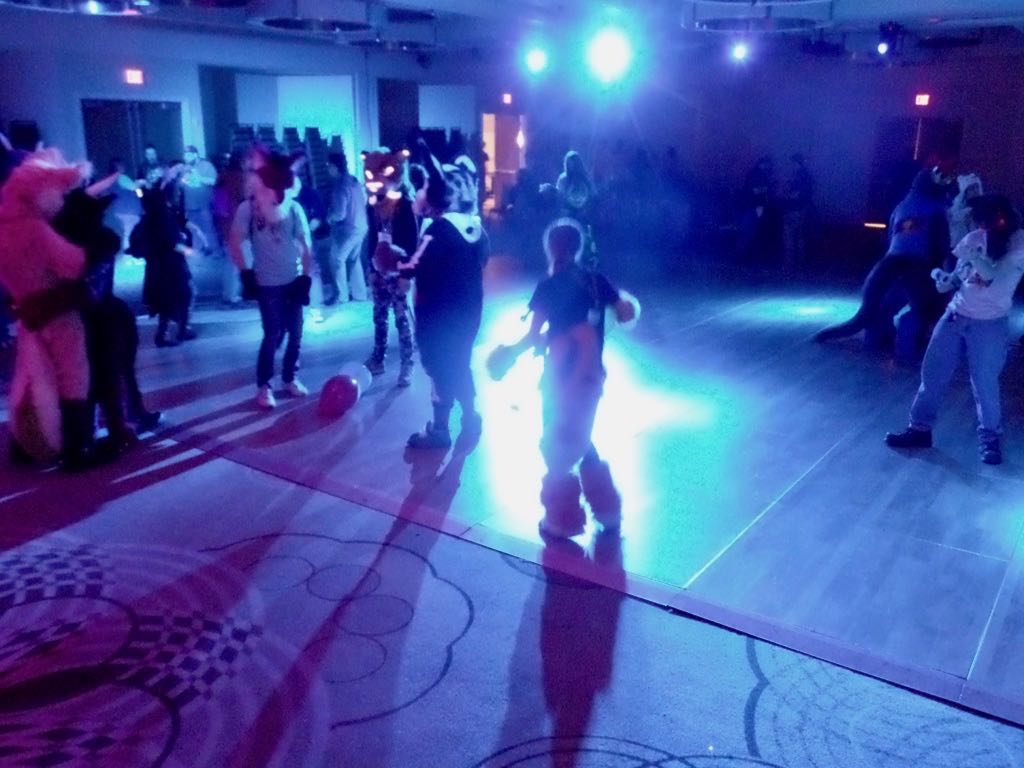 And actual dancing, which had a modest crowd and balloons by this point, something like 1 am. 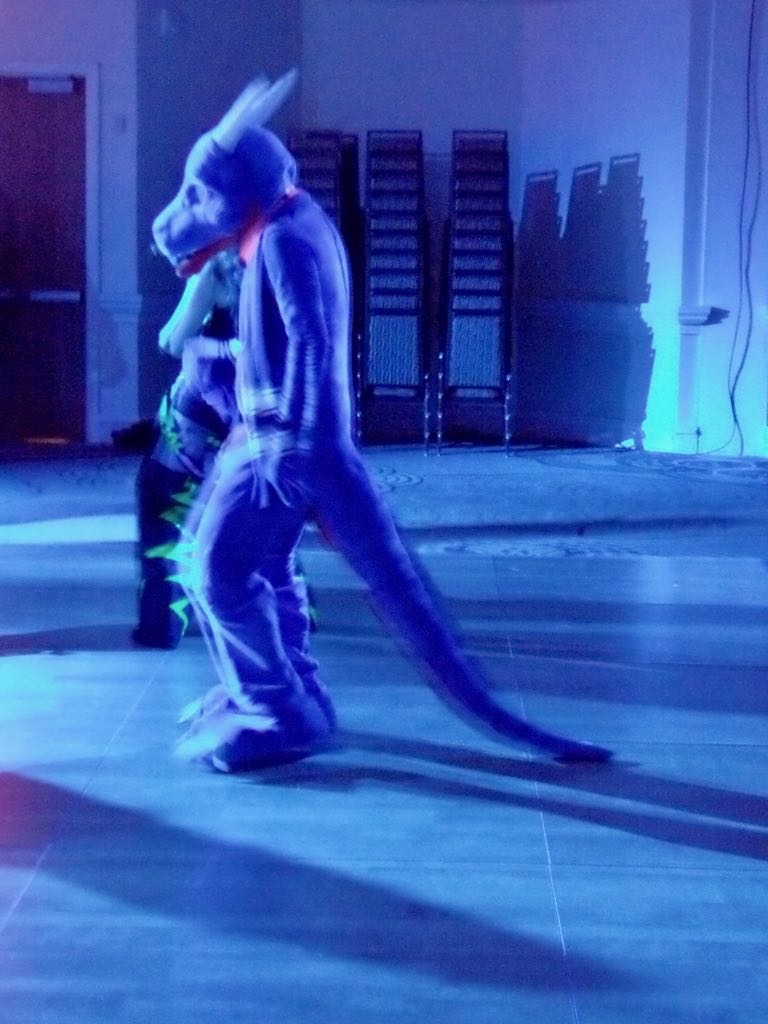 Dragon with way better moves than I will ever, or could ever hope to, have.