Fremont pinball events used to be in the Blind Squirrel Tavern. It's a nice enough bar/restaurant. Over the spring of 2018, AJH grew dissatisfied with the place, and he finally left it altogether. He moved the events to Special When Lit headquarters, the place where he kept and worked on the games he planned to route around. Or keep for pinball tournaments. It had drawbacks: no Wi-fi, and the only restaurant in walking distance was the upscale place attached to the bowling alley next door (it's a small town). But it had two rooms of games and plenty of space to hang out and sit and such. So it was a happy new location.

bunny_hugger. Not that she didn't like the place. It's just that ... in the cramped confines of the Blind Squirrel Tavern, with six or seven tables to play, Fremont leagues would be these nice sleepy affairs. Seven or eight or nine people would show up, and we'd play all day, and in the end she'd finish fourth or third or even second in the league and take home a crop of International Flipper Pinball Association points. These points are why she --- and I --- would make it to the state championship at all. In 2018, IFPA changed the rules so that in a calendar year only your 20 best events in a state counted for your ranking, not everything you played. This dropped both of us in the standings.

bunny_hugger worse than me, though. This is mostly due to the way IFPA calculates scores; the higher your finish, the very much greater your score, so that (say) a third and a seventh place are worth more than two fifth-place finishes. I'm more likely to have a third and a seventh; she's more likely to have two fifth-place finishes.

And with the new, larger venue, more people started going to Fremont tournaments. Tougher people, too, including people like RLM and MSS who always finish on top of the Grand Rapids Pinball League. The casual Fremont players who didn't mind hanging out at a bar-restaurant were less likely to come to the SWL facility that's a former engraving site, too. So there were more competitors, and tougher competitors.

So, for a long while,

bunny_hugger and I were keeping startlingly similar average finishes at SWL. But I would occasionally get a fifth or a sixth or even a final-four finish, that she wouldn't. Several months running she didn't get past the first round, taking home few points for a drive that's two hours, one way. If we didn't carpool then our drive back would include a lot of her berating herself for not being any good at pinball and now everyone had the proof.

And this would be dismal. By the middle of the year she was sitting at about 36th place in the state. Which is not bad considering how many hundreds of people play enough in Michigan to rate. But only the top 24 get to go to the state championship. Five people ahead of her were from out of state and unlikely to play; they were drawn here in April for the Pinball At The Zoo event, a Major tournament that drew players from the whole continent who cleaned up. But still ... she was sitting about 15 IFPA points outside of contention, even counting the people we could feel confident weren't playing. I kept saying, two good finishes at Fremont and she's in the running, and --- as of mid-August --- there were still nine Fremont tournaments to go in the year.

Over the course of this August, AJH finished securing a new facility, New SWL Headquarters. It's a former car showroom, with a great many huge windows up front and a back room that's a former service bay. Plenty of room for even more pinball games and even more space. The end of August had the first Fremont tournaments in the New SWL Headquarters. One would be the Monthly tournament, based on people playing at SWL venues in August. The other would be the League, based on people playing at SWL venues in July and August ... a time which includes the Baby Food Festival, which drew dozens of extra people who'd play. This is very good since more people playing makes a tournament more valuable.

In the Monthly tournament, well,

bunny_hugger had her old luck again. She got past the first round against sixteen players, but not through the second, and took ninth place for a meager 1.37 IFPA points. Me, I had some decent play and got to the penultimate round, for 5th place and a decent 3.74 points. (This included, for me, a round in which I played AJH and a guy whose name I didn't catch. For my lone pick of game that round I went to Johnny Mnemonic, knowing full well that AJH could cream us on it. And he did, putting up nine billion points on a game that's high-scoring, but not usually that high scoring. I put up three billion points. The other guy ... did nothing like that. Later on, when I was teasing someone in another group for picking a game that MSS was incredibly strong on, AJH pointed out, I took him to Johnny Mnemonic. I pointed out: I didn't need to beat him. I needed to beat the other guy. The top two in our three-player group would move on. I overachieved that, though. With me getting five times his score, and AJH scoring fifteen times his score, he was beaten the whole rest of the round.)

The real action, though, was in the League. Here,

bunny_hugger didn't just have a good first round. She had a good second round, and third. For the first time in over a year --- for the first time since Blind Squirrel days --- she made it into the final four. She did nothing in the final four, mind, getting a couple last-place finishes before rallying too late. But the top four finishes are the real big payoffs.

For her fourth-place finish in League she drew 13.87 IFPA points.

We had expected she might get seven or eight. But here? In this one tournament? She made up basically the whole gap she needed to overcome to be in the running. She is, as I write this still 26th-ranked in Michigan. But the two people ahead of her are out-of-staters, Steve Bowden and Derek Fugate, who almost certainly will not play in Michigan. She's 24th among the people likely to play. She's five points away from taking 23rd place. She needs to hold her position yet, for the rest of the year. But she doesn't have to earn her way into the top 24 anymore.

Maybe the first SWL Headquarters location was a jinx for her. I'm really hoping she gets another final-four appearance this year, though.

Funny coincidence. With the new venue is the return of FunHouse to the Fremont tournament lineup. Maybe that's made a difference.

Trivia: In 1940, when the Dutch East Indies had a population of about 70 millions, there were only 637 ``native'' Indonesians in college, and only 37 graduating with BAs. Source: Empires of the Word: A Language History of the World, Nicholas Ostler. (This in a footnote pondering the refusal of Indonesians to use Dutch as a common language.)

PS: My 2019 Mathematics A To Z: Encryption schemes, in which I try to explain everything about a complicated field in 1200 words. See how I do! 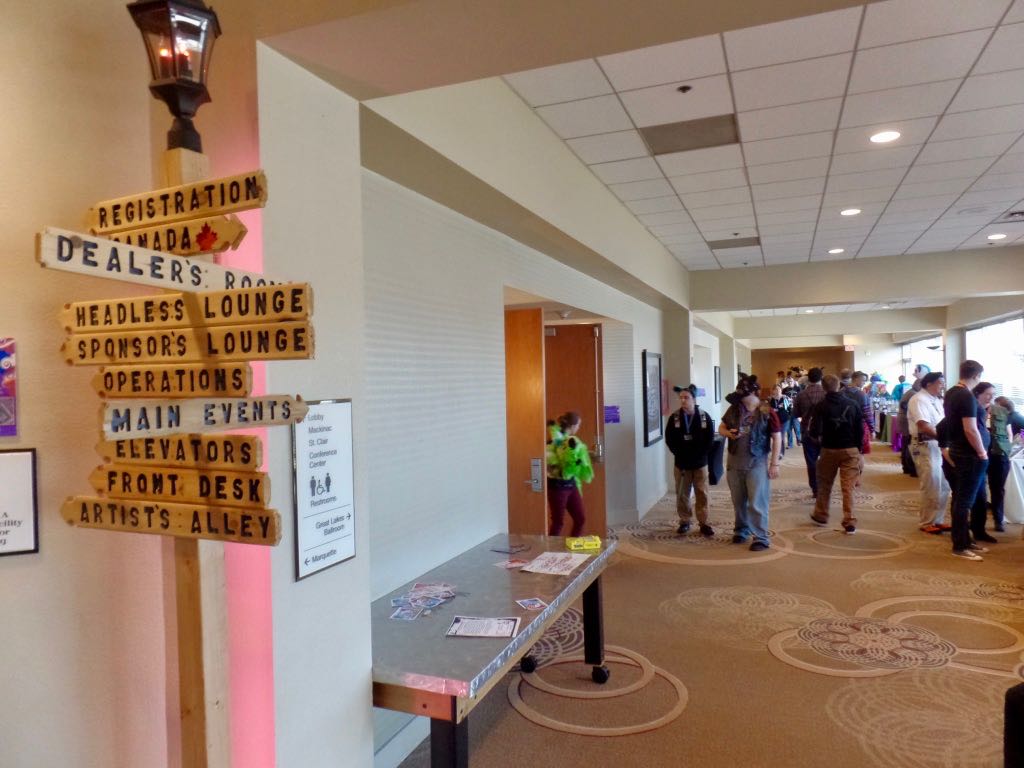 The directional sign outside main events and the dealers den and all that, at the entrance by the parking lot and away from the main lobby. 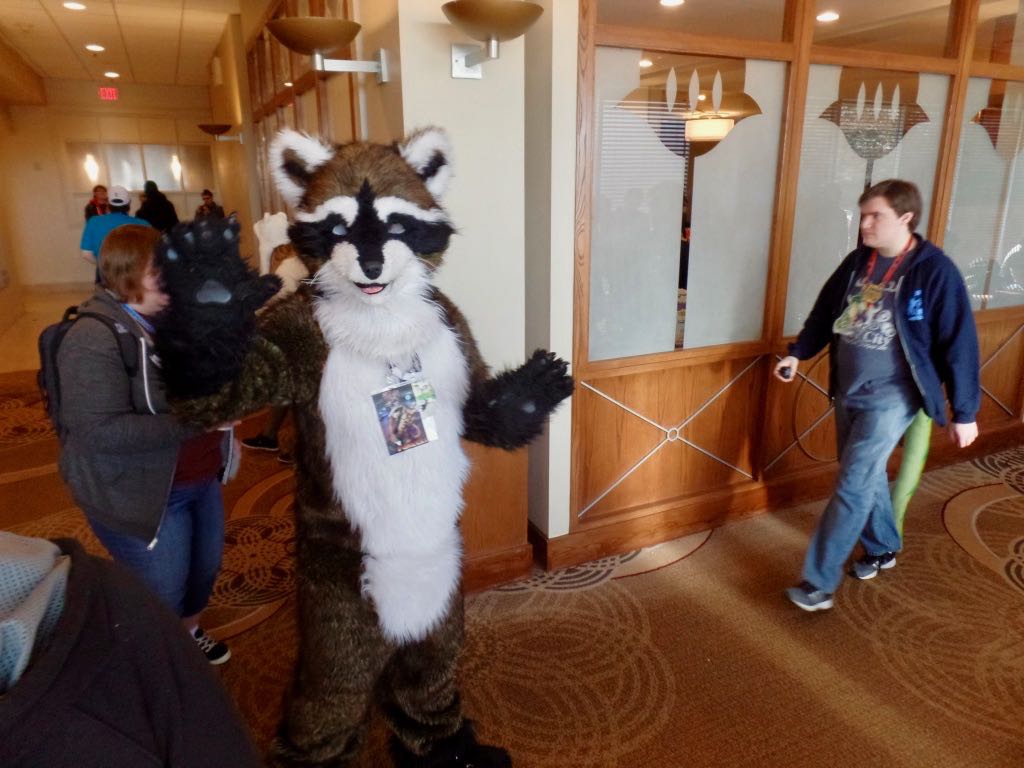 Fursuiters making their way toward the parade. Here's PunkCat showing off being a raccoon, for example. 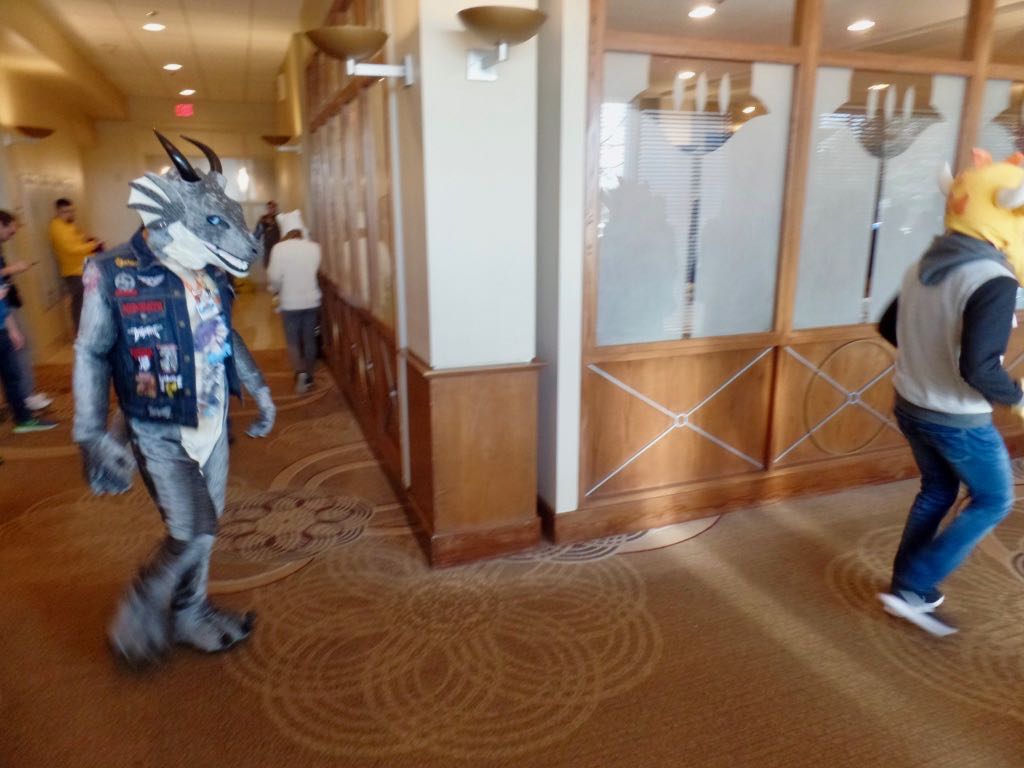 And here's a nice-looking dragon making his way to the gathering spot.