Aroma rising from the ancient coals

bunny_hugger's father over. They had visited last summer for an afternoon of grilling too. This summer we hadn't found the time for it. Also, yeah, since it's easier for us to travel than them, we'd usually go down to their house for a visit. But we hadn't had the chance to show off how the house looks, or had such a firm encouragement to get our house in presentable shape, in a while. With summer dwindling, and the discovery that Horrock's market has Beyond Meat burger patties, we had motivation to go and schedule something specific.

Also re-schedule, since the weather looked lousy the Saturday we had planned. This turned out well since it let us get to the Fremont tournament where

bunny_hugger hopefully broke her slump. And give us some more precious hours to get the house in less bad shape.

Beyond Meat burger patties are expensive, about $3.50 per. Given that we only bought six burgers for the four of us, trusting that

bunny_hugger's father would want two and her mother would think even having a full first burger was maybe too much.

bunny_hugger and I split the second. The burgers were startlingly good grilled. Not quite as good as the Impossible burger, to our tastes. This would disappoint

bunny_hugger's brother, who's a big Beyond Meat fanatic. It also disappointed

bunny_hugger's father, who bought stock in the Beyond Meat corporation and checks the price I think it's every two hours. Still, it's really good, especially grilled, and made for a great experience.

Part of that might have just been the setting. We spent most of the afternoon appreciating the backyard, which

bunny_hugger works so hard to get into the English garden style of slightly overgrown local plants. The worst disappointment was that her cardinal flower, a wonderful dose of bright red among the mostly dark green plants which grow in our shade, got cut down by some animal a few days before the visit. A second flower was beginning to bloom, but it's a smaller one and was nowhere near so developed, and

bunny_hugger cursed the probably-raccoon who ripped it up for no obvious reason.

Also we spent time watching squirrels make use of the squirrel feeder. The squirrel and bird feeders have become my care. We saw several black squirrels --- I don't think it was the same one visiting every time --- making trips to the feeder and back. This was really great as they were using the new fence to get close to the tree. And this was glorious. The squirrel would run along the top of the fence slats, jumping down every six feet onto the tops of the 4x4 posts, and then jumping back onto the slats. It looked just like an animation cycle of a squirrel running along a fence but taking advantage of the thicker posts. When the squirrel got close enough to the feeder-bearing tree it'd leap out in this wonderful yet somehow hilarious fling, and grab onto the new tree. It was hypnotic. Only a couple times did the squirrels skip the post diversion.

bunny_hugger's parents stayed for only about four hours, enough for dinner and some time after, and to walk around appreciating the garden and to see Sunshine and all. They wanted to drive home before it got dark, fairly enough. But it's good to have them over at all, and we need to make more frequent explicit invitations to come up.

Trivia: Continental Army forces attempted a surprise attack on Staten Island for the 15th of January, 1780. Publisher Hugh Gaines of The New York Gazette wrote about it the 13th of January. The attack was not a success. Source: The Uncertain Revolution: Washington and the Continental Army at Morristown, John T Cunningham.

PS: Reading the Comics, September 14, 2019: Friday the 13th Edition, where I get to talk a little about prime numbers, not including 13.

PPS: The fursuit parade continues getting ready to start. 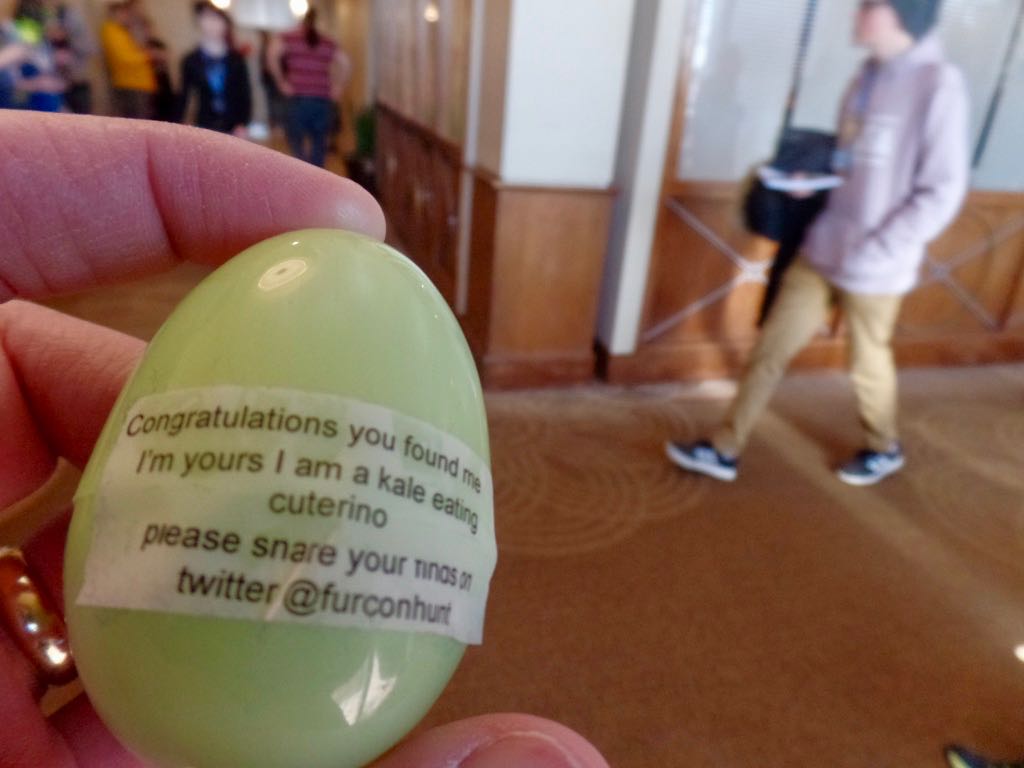 A plastic egg which I found at the con. There were a bunch of these with little trinkets or characters or whatnot inside. We only found two of them, one in the game room and one in a plant along the parade route, but allegedly they were restocked throughout the convention. 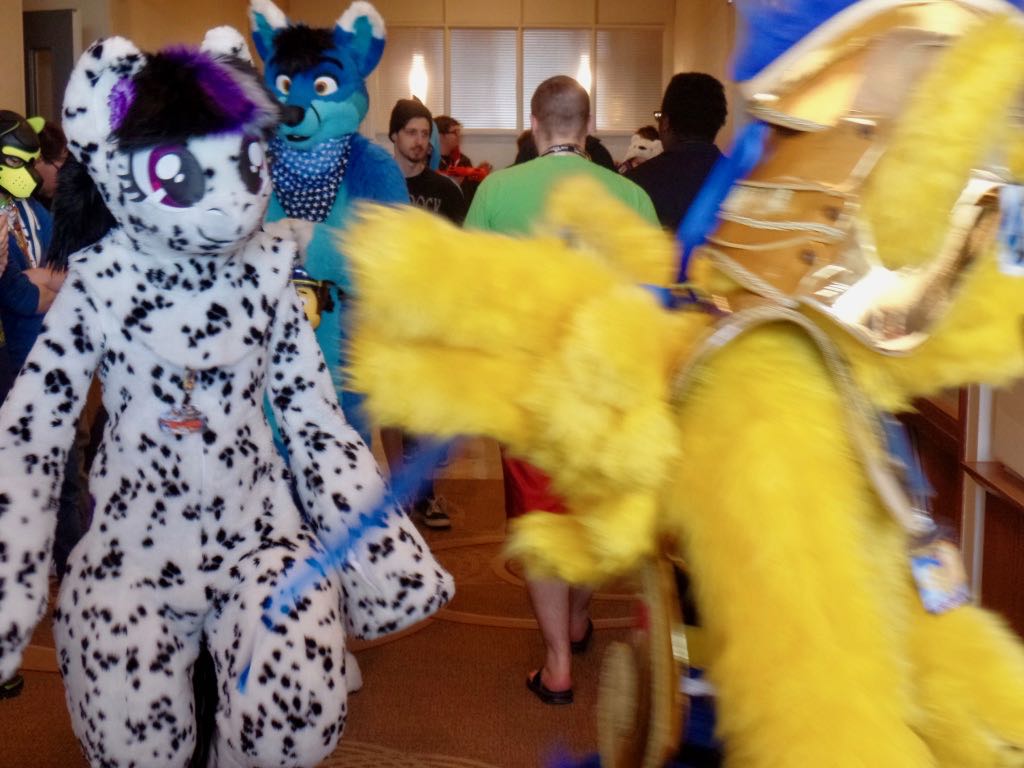 More gathering for the parade. I'm not much on My Little Pony characters but I do like the Dalmatian spotting here. 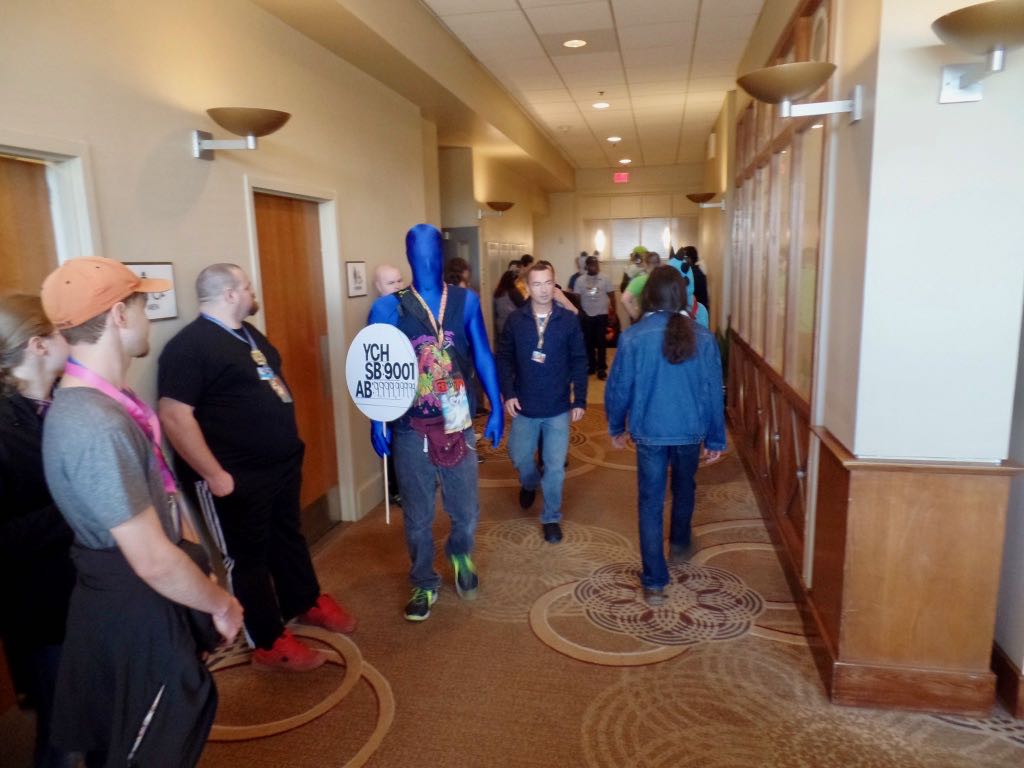 And I've also seen this person at Motor City Fury[ry] con a couple times, the one with the Your-Character-Here costume. At least I trust it's the same person each time. I suppose there's no way of knowing.