Cause we'll be riding that vibe till the day we die

We made our traditional visit to Michigan's Adventure for closing day. This was the Sunday after Labor Day. It made us miss a pinball tournament we only learned about late. Just as well; we wouldn't want to miss the last day. In a break from tradition, the weather was not bright, sunny, and cloudless. It wasn't unpleasant, but it did keep threatening to turn bad. This was barely two and a half weeks after our previous visit, so it's not like we expected the place to be very different. One minor change is the park didn't play any Walk The Moon. In our August visit they played a bunch of Walk The Moon songs, including some that weren't their biggest hits.

bunny_hugger worried over had been shorn, some, which we took to be a sign that she'd gotten some examination and care. She felt bony still, but it had only been a couple weeks. Also at one point a petting-zoo worker moved the bench over near the edge, holding up rabbits where they could be petted. The Flemish giant even sat up tall, chinning the bench, and looking like she was deciding whether this was worth leaping up on. It was not.

Mad Mouse was still running, and still running with a short line. This took too long to get through still. It seemed like they were running abnormally slowly. And one of the purple cars was being reliably sent out without passengers. This probably was because of a problem with the restraints, which almost always will freeze up in the secured, locked position.

Other rides were looking good. Thunder Bolt, a Matterhorn ride --- swinging cars going in a hilly circle --- particularly had its embarrassing number of burned-out light bulbs replaced. The ride still isn't fast enough for our tastes, and it doesn't have the cycle where it goes in reverse. Cedar Fair-owned parks do not like stuff running backwards, even for rides designed for it.

The demolition of Be-Bop Boulevard was near complete. The parts of the station left at our previous visit were gone, and it looked like some trees were dug up for transplant. Part of the Camp Snoopy area that's supposed to replace the attraction is a roller coaster. Nobody has declared whether this will be their current kiddie coaster, Big Dipper, relocated and renamed. It would make good sense to relocate and rename it, though; the current location hides the ride so well you have to work to discover it's there. We did go up to it and take pictures, in case this was the last day of operations it would be under this name and location. We did not ride, though. We've ridden it in the past and it's rather hard on the knees.

Speaking of rides hard on the knees. Wolverine Wildcat felt less jarring than it had two and a half weeks earlier. This can't represent any significant changes in the ride. It must be a difference in seating; we got up front this time --- the first car, anyway --- and the ride was better. Shivering Timbers too was much less rough. Here we think it might be the train. There's a blue train and a green train, and this time, we were on I'm going to say the green train. Last visit we were on the blue train (the only one running that day). If I have the colors reversed it doesn't matter. But this time around the green train rode much less rough.

And this was what we picked for our last ride of the season. We didn't get the very last train of all, but the last of the green train rides is not bad. The only serious disappointment was that the kettle corn stand ran out early and we wouldn't have anything to eat on the way home. We did try to stop in Grand Rapids, for a dinner at Stella's, but some event consumed all the parking in town and we just could not even get out of the car, sad to say. We consoled ourselves with Impossible Whoppers instead, once we got back to Lansing.

We've got to get to Michigan's Adventure earlier in the season next year.

Trivia: The lyrics to the Mighty Mouse theme were written by Marshall Barer, 1923 - 1998, a writer and producer for Golden Records. Terrytoons studio musician Philip Scheib wrote the music. Source: Terrytoons: The Story of Paul Terry and is Classic Cartoon Factory, W Gerald Hamonic.

Currently Reading: 100 Years of American Newspaper Comics, Editor Maurice Horn. So apparently Zippy the Pinhead as a comic strip started out self-syndicated to college newspapers, which makes like 80000% more sense than any other explanation for how it got into syndication at all, under any circumstances, ever. I can even see where it made sense for King Features to pick that up, then, once it was in college newspaper syndication. How it's stayed there is a glorious mystery for the ages but that's all right. We need those. Again, I like the strip, it's just baffling that it's theoretically for sale to newspapers to fun.

PS: Exploiting My A-To-Z Archives: Energy, a bit about turning vector problems into scalar problems, which are so much better to deal with.

PPS: Saturday at the 2018 Motor City Fur[ry] Convention, after the parade. 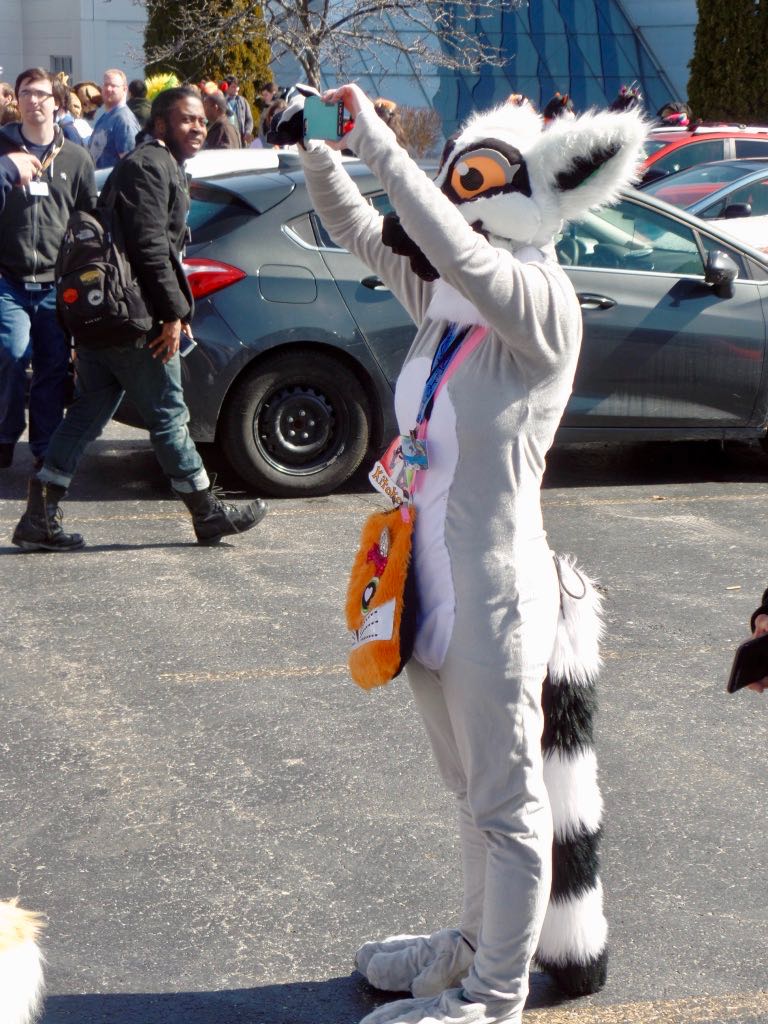 Lemur getting some pictures of the group in, too. 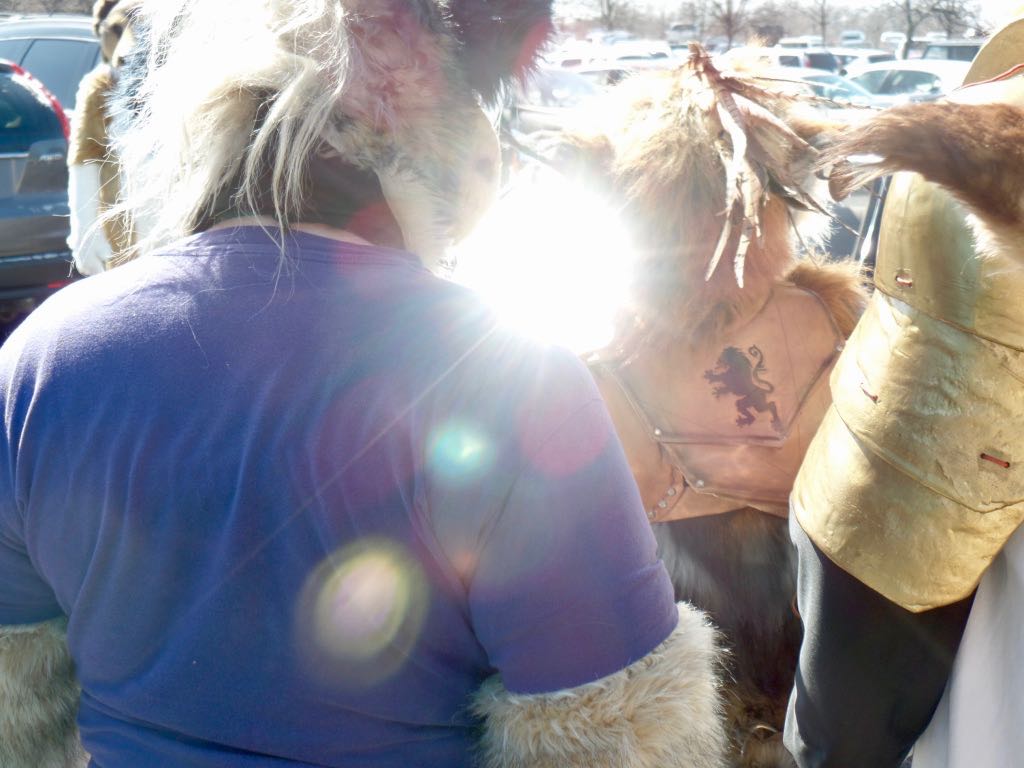 After the group photo, the fursuiters walk back toward the gap in space leading directly into the sun. 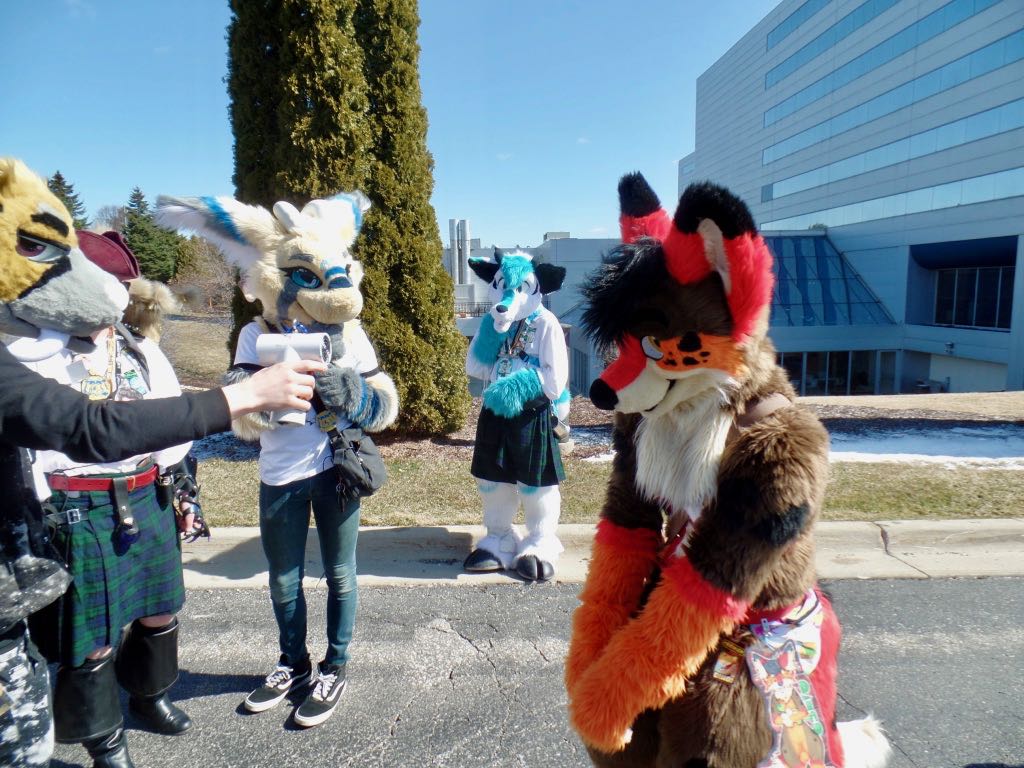 So someone worked up this little hand-held fan and went around to fursuiters cooling them off until the fursuiters thanked them for it. The gesture's well-meant but they did at one point come to

bunny_hugger when she wasn't feeling all that hot and waited for her to say something, which she tries very hard not to do in suit. This is why New York City tries to ban windshield washers, you know.