You are the moves you make, take your chances, win or lose

So how has the month of

bunny_hugger's stolen computer experience been? ... We seem to be through the worst. The worst, besides the theft and making do with a MacBook so old that the battery was gone and a loaner computer from work, was that Time Capsule didn't load. Her new computer wouldn't pick up the files that she had backed up, daily, and stored in two separate locations. Do you know how angry she was about this? Take how angry you think she was, double it, square that, double that, square that again, and double it again. She was angrier than that.

As will happen with computer problems victory came from re-thinking about what was really wanted. Preserving the continuity of backups would be great, but, what was important was saving mail archives. Everything else was files that could be copied over easily. The old, offline, mail archives were the sticking point. But

bunny_hugger finally realized that she could just copy the mailbox archive files onto her new computer, and have OS X Mail import them into its new archives. This took far longer to do than it should have, but it was the most important thing to overcome in making her new computer have the stuff the old should have.

There have still been adjustments. Control panel settings. Programs that need re-installation. Programs she'd had forever that she had to download new installers for. This included the graphics program she uses to make plaques for pinball tournaments ... such as the one we had this Wednesday. It was a launch party for Stern Pinball's new Jurassic Park game, and up to the day before we were not sure she'd be able to make plaques for second, third, and fourth place. (Stern sent a high quality plaque for first.

That tournament, by the way, went well enough. Not for me. We did it Herb-style again, qualifying by putting up games on a set of tables.

bunny_hugger's clever theme: Playing The Scales, all games where some scaled creature was prominent, like Jurassic Park (dinosaurs), Game of Thrones (dragons), Monster Bash (Creature from the Black Lagoon), or Metallica (a snake). We would have had Deadpool too, as it's got dinosaurs, but the game was moved far enough away from the others that it would be too hard to scorekeep there too. I put up a decent game of Monster Bash (with a dragon), but nothing at all good anywhere else.

bunny_hugger had several decent games, and in the last minutes of qualifying put up a great Monster Bash, on a third-ball rally starting from nothing. That fantastic game ... did not move her into the playoffs after all.

The winner, by far: AJR, making his first appearance at any Lansing event since his third-place finish at Pinburgh A Division. He found his way to our hipster bar after all. Great to have him over. If he does join the league it'll be great to have a person of such outstanding ability playing against us, we tell ourselves, through gritted teeth. It's really going to make everyone step up their game, we insist.

But this was also the first big event for which

bunny_hugger could use her new rose-gold MacBook Air as her computer, confident that she should not have to wipe its memory and start from scratch. This week she was able to return the loaner computer to work. And while she's still got the ancient MacBook out, she's had less occasion to summon it.

Trivia: The young Roald Dahl was told, by a friend's father, that licorice bootlaces were made from rat's blood, with ten thousand at a time fed into a huge vat which would be smashed flat and extruded into laces, a legend did not stop him eating them. Source: Sweets: A History of Temptation, Tim Richardson.

Currently Reading: The Triumph of Seeds: How Grains, Nuts, Kernels, Pulses, and Pips Conquered the Plant Kingdom and Shaped Human History, Thor Hanson. It's been too long since I read a nice book about something that Changed The World.

PS: Exploiting My A-To-Z Archives: Fredholm Alternative, to mention one of the all-time great names of functional analysis.

PPS: Hanging out immediately after the fursuit parade. 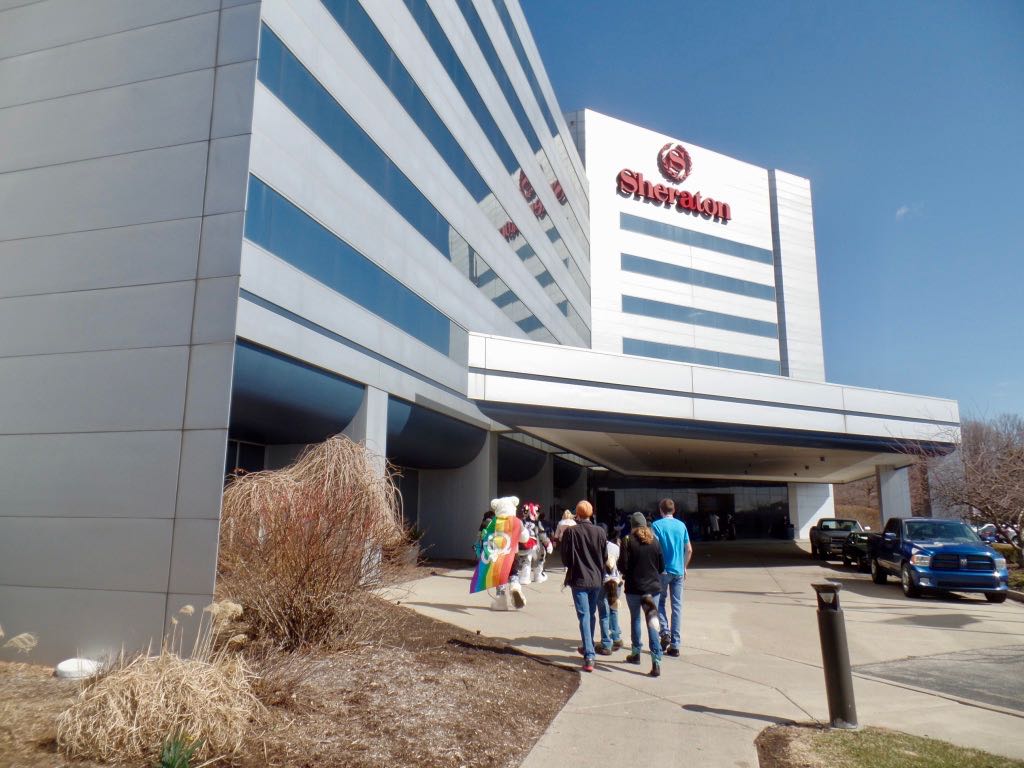 A walk back into the Sheraton through the front door, which we basically only ever used for the fursuit parade. 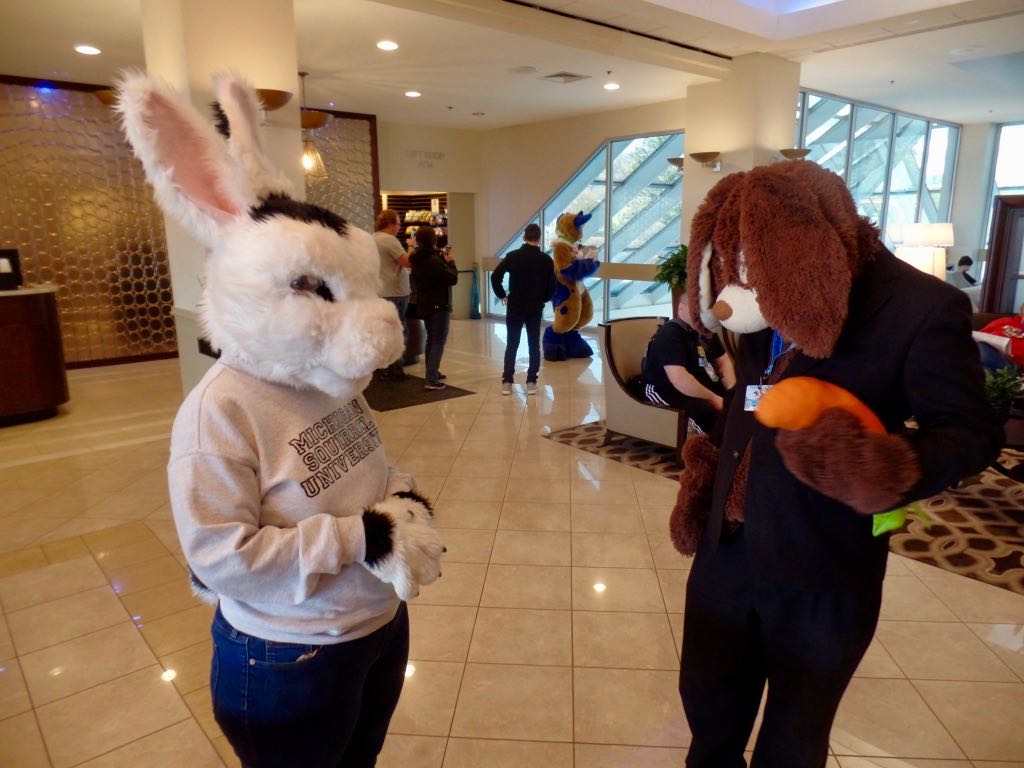 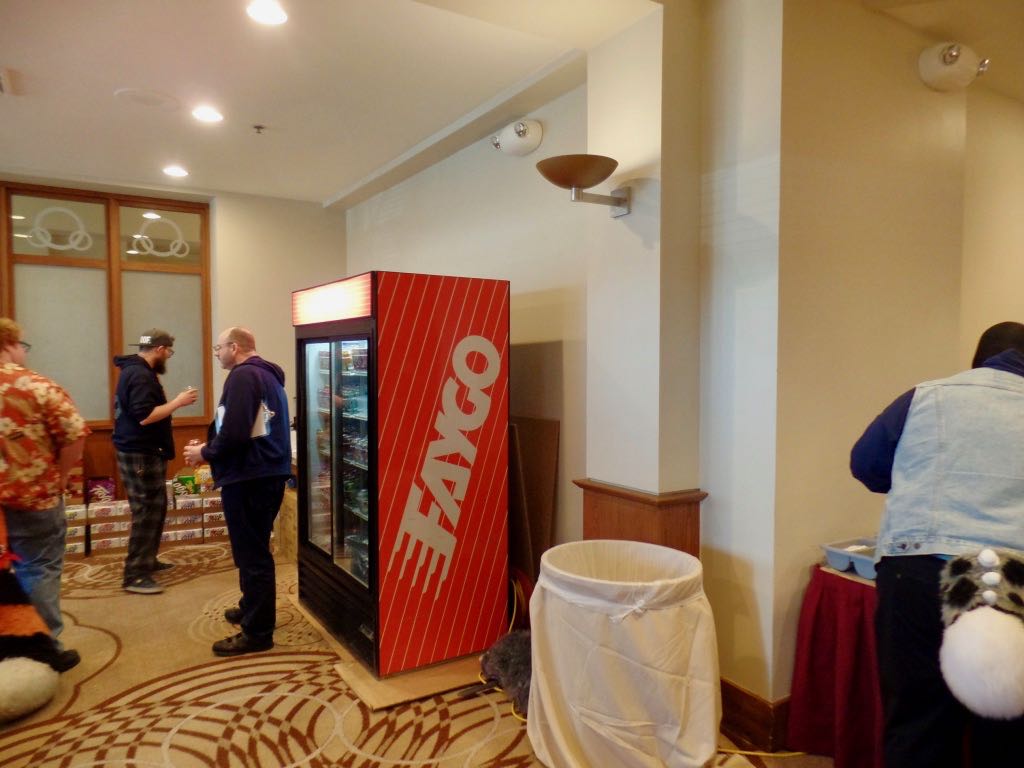 The signature beverage of Motor City Fur[ry] Con, and the thing that fuels my and

bunny_hugger's ongoing joke in pinball community about being secret Juggalos.