This past weekend threatened us with something we haven't seen in a long while: unscheduled time. There was good in this; it let

bunny_hugger finally catch up with schoolwork after her computer disaster, for example. But we chose to go to Cedar Point one of the weekend days. We'd only been the one time this year, at the start of the season. And we could get in an extra day enjoying the Halloweekends fun on what should be a low-crowd day. We chose Sunday, when the park would close at 8 pm. This implied we'd have to get up earlier in the morning to get a whole day in. But it'd mean we wouldn't be still driving home at 3 am or anything. And Sundays are usually the slowest day of Halloweekends. It might have been, too, had it not been a late summer day: beautiful and sunny and warm; it was 90 degrees Fahrenheit at 7 pm. So it was crowded, and we would get on fewer rides, but that's all right. We have season passes; we don't need to do everything on any visit.

There was much good to see at Cedar Point, of course. The grease trucks were still there, though we didn't learn that until after lunch. The park keeps making little improvements in the appearance of the place. Most notable for us: one of the tunnels on the Magnum XL 200 roller coaster had strobing lights racing toward the train, as the train raced through the coaster. It's a small scenery thing that hasn't worked since the roller coaster was new. There were new signs above the Mine Ride roller coaster, adding bits of detail and integrating it more into the mythology they're putting on the Old West area of the park. Also we discovered another stand in the park that sells coffee, bringing the number of places we know of up to three. One of them's in the back of the park. And they were running two trains on both sides of the Gemini racing coaster, for a change. The custom of riders reaching out to slap the hands of their counterparts, when the trains were near enough, still thrives, too.

Still, there was a recessional air to our visit. The first great moment was in the Town Hall Museum. Cedar Point had announced a major renovation to this museum for next year, the amusement park's sesquicentennial. The park has been generally lousy about showcasing its history; even the Town Hall Museum mostly had miscellaneous pictures and a couple props, none explained well. Coin-operated machines that no longer functioned. And --- for some reason --- the whole contents of an old-time pharmacists's, bought in the 1970s when the park felt like it should do history too? This stuff, including oddities like a great pile of iron stoves, have sat in the Town Hall Museum gathering dust and questions for ages. So a good museum would be appreciated, but we wanted to get a last visit to the ramshackle old.

We didn't get it. We walked in, but everything past the first few feet was curtained off. We could poke our cameras through, and the photographs reveal that most of what had been there still was, just moved around, one imagines for re-sorting. The three carousel horses were removed, to what purpose we can't guess. But worse was out front: the pharmacist shelves and all were removed; you could see the ghost of where they had protected the wall paint from age. Some of the pharmacist counter stuff was still there, but only a little bit. Of course we'd want a good display about Cedar Point's history. Like, they have statues from the 1904 Worlds Fair and Olympics. There is not a single word of anything inside the park that would let you know that. And while they had not done much with, like this, like, pharmacist and stoves and other miscellaneous junk, they had been custodians. Where is it going, and what's to become of it? We can hope this means better things ahead, but we don't know, and we fear the loss.

Worse was on the Frontier Trail, though, at the Candle Shop. Or, Rose's Candle Shop, named for Rose Stein, longtime candlemaker. I noticed right away the counter and cash register had moved to the other side of the door.

bunny_hugger noticed right away the stock was ... just ... missing. There were only a couple of candles shaped like animals. None shaped like leaves, a candle she always gets some of for fall. The second room, with another panoply of odd candle shapes, was entirely closed off, and partly obstructed by the candle-making equipment. There wasn't any notice in the shop that Rose Stein had retired or worse --- just the sign that the candle-maker would not be in today --- but what else should we make of that?

The China Shop, a small shop that's been run by one German(?) woman for a half-century now --- since before Cedar Point drove out all the independent concessions, a trend only now reversing with the grease trucks come back --- was still there at least, and open, and in good order. We chatted with her a little bit, mostly about how very hot it was, and how warm the whole summer had been. So this was a consoling touch in the day.

But the most terrible came at the end of the day, and this after a great day where we'd ridden both sides of Gemini, gotten to see Blue Streak in good order (and given a Halloweekends identity as ``Boo Streak'', silly enough it's amazing this hasn't been its October name for years), and gotten Korean noodles at the Cupzilla grease truck. We went to the Kiddie Kingdom carousel for the last ride of the night. It's a Dentzel Carousel from about 1925. It's got a variety of animals on it, including ostriches, bears (one painted as a panda bear), and four rabbits. One of them would inspire

And the ride operator told us adults weren't allowed on it.

At least, not without kids to accompany.

We were flabbergasted. The words barely made sense.

bunny_hugger asked when that was made a rule, because she'd ridden this her whole life. We'd ridden it our earlier visit this year. We're antique carousel enthusiasts. This is one of Cedar Point's oldest rides. (If I'm not missing something it's the second- or third-oldest ride they have, although it only came to Cedar Point in the 1960s. Also saying how old the railroad is is a matter of definition.) The ride operator sputtered a bit that this was how she was trained, that all the Kiddie Kingdom rides were for kids, or adults with kids. But then she said, ``But you're okay'' and let us on.

Which, believe it or not, is not what we wanted. I mean, we got on the ride, and went to the ostriches while I thought horrible thoughts about this being the last time we would ever ride the carousel, at least for the indeterminate future.

But we genuinely want to follow the park rules, even if we think they're stupid. If the rules have changed, all right, but we wanted to know that so we could complain about the rule change.

bunny_hugger feared that she was being so confrontational, talking like she was going to Speak With Your Manager, that the ride operator backed down out of the terror of crossing a middle-aged white woman. Which, again, is not at all what we wanted, and certainly not how we wanted to end the night.

We would debate for an hour the meaning of this experience, especially as

bunny_hugger thought of how it suddenly turned horrible.

Well, she did e-mail the park, asking what the rules were. The reply was swift: no, the Kiddie Kingdom Carousel was open to everyone. They apologized and said they would make clear to ``associates'' that unaccompanied adults were allowed on the ride. (There is another Kiddie Kingdom ride which adults may only ride if they're accompanying kids, and it's possible the ride operator mistakenly generalized from that to the Carousel. ... It's also possible that she was hoping to not have to do one more ride so close to park closing and didn't realize there were two people here who just would not believe in a carousel being closed to them.) Which is great, but does leave open the feeling that, jeez, we don't want the operator to get in trouble. I suggested

bunny_hugger write back emphasizing that the ride operator handled the situation just fine.

So that's a happy epilogue, but it did mean as we were driving home, Cedar Point felt a great bit like a park slipping away.

I drove out by the Chaussee, the old and tiny and narrow road that hasn't been the main way into the park for sixty years. There are always rumors that the private homeowners on that narrow strip of land will get the road closed off to park traffic. I insisted I wasn't going to miss my last ride on the Chaussee. From there, though, I was unable to figure out how to get back to the Ohio Turnpike. The signs got rare, the street lights vanished, and without other traffic I was not at all sure we were getting there. (On looking at the map, it looks like I turned back about half a mile short of a sign that would have told me where to go.)

Trivia: In 1883 there were at least 27 time zones in use in Michigan. Source: Michigan: A History of the Great Lakes State, Bruce A Rubenstein, Lawrence E Ziewacz.

PPS: Here's getting into Sunday, the last day of Motor City Fur[ry] Con 2018 and it happens the last day at the Sheraton in Novi. 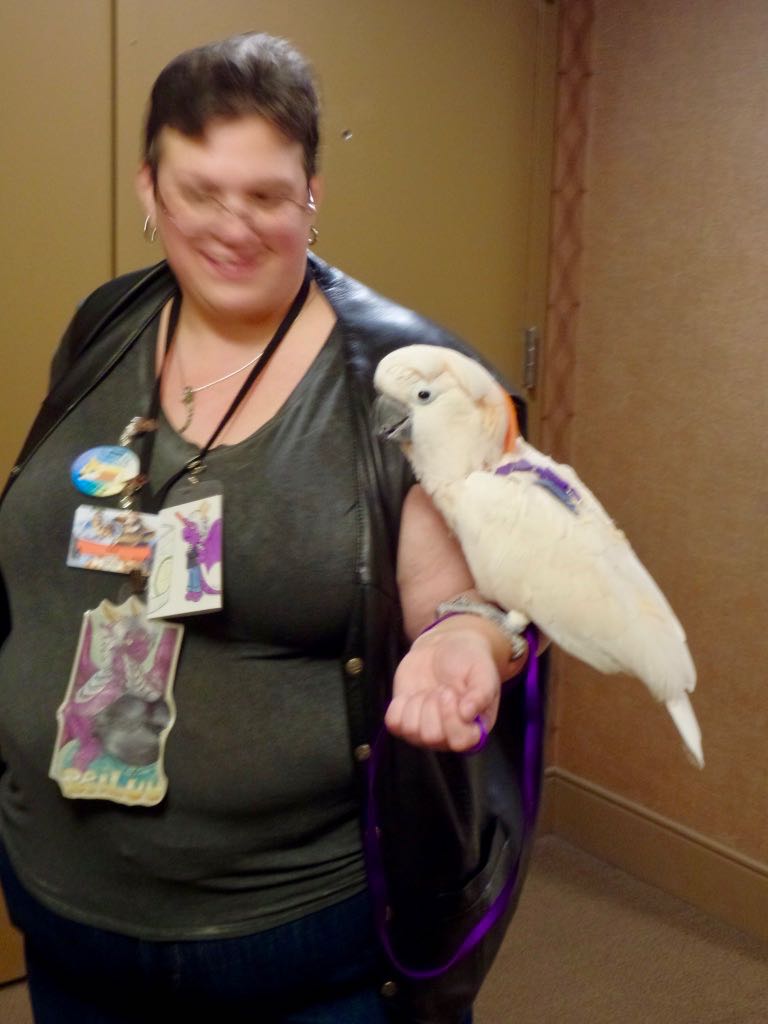 A woman walking her bird around some of the panel space. I'm sorry that her face is blurred but I didn't have the light settings right and in the dark my pictures either have her blurred and the parrot reasonably sharp, or both blurred, so here you go. 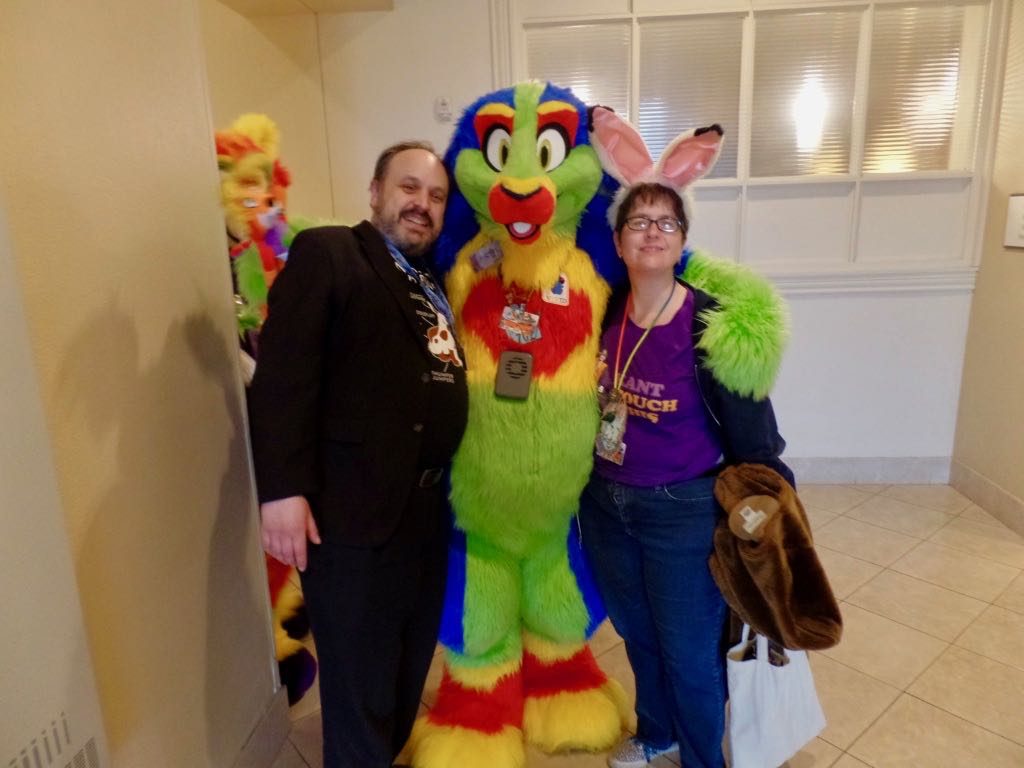 Another key discussion moment with

bunny_hugger and some unidentifiable persons. You maybe notice that

bunny_hugger has her winter coat with her, because it was not warm enough to just run to and from the car without that on. 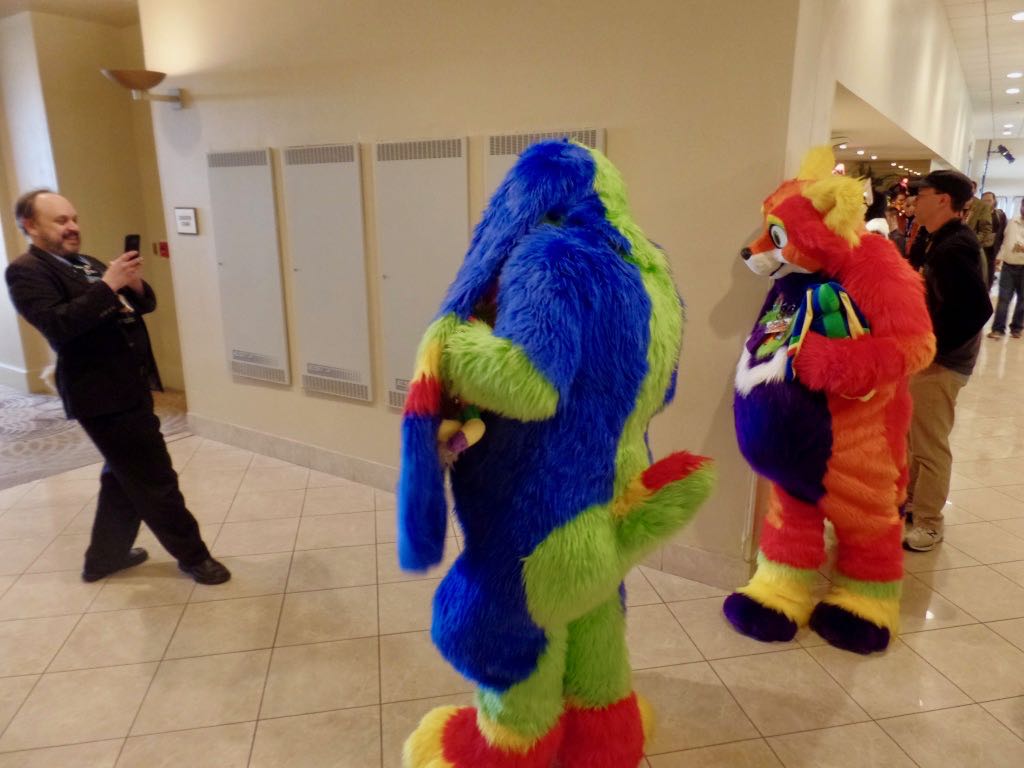 A picture capturing how it's fun taking fursuit photos at the con.