Jazzin' around and paintin' the town

Let me add a couple scraps of Cedar Point events. These could have gone in yesterday's report if they fit my elegiac thesis. But the first is that there were a bunch of furries at the park. By a bunch, I mean four that I could identify. I can identify them because they were in two pairs. One of them was wearing a Hyena Agenda t-shirt. The other was wearing the 'Anatomy of a Fox' t-shirt. This is the only time I've seen either outside furry conventions or some other hangout like that.

It's a bit of a shame the weather wasn't cooler. Not cold, mind, but cool enough that we might have gone in kigurumis. They seem to allow that at Halloweekends, I suppose trusting that these aren't so much costumes that they're likely to confuse park guests about who's working for them and who isn't. But we were expecting it to be mid-80s, and it was even hotter than that, and I certainly don't have a summer-weight kigurumi like that.

We were wearing our usual outfits instead, t-shirts for other amusement parks. Mine was for the Jack Rabbit roller coaster, at Seabreeze.

bunny_hugger had (without knowing my plans) been thinking to wear hers, but she got the shirt in black and didn't think she should wear a black shirt in 85-degree weather. 90-degree would have been worse. Still, while we were in the rump Town Hall Museum, we encountered a guy who'd been to Seabreeze and happy to acknowledge that to someone else who knew the place. We said how we'd only been there the once, but loved it, and so that was our encounter with either another coaster enthusiast or just somebody who used to live in western New York.

Also while at the rump Town Hall Museum we paid attention to the portraits of white guys in suits. The portraits have, as long as we've gone there, always been there. This time we checked the names and looked up just who they were and why they might be memorialized this way. They're Emile Legros and George Roose, the investment bankers who in the 1950s bought Cedar Point. At that time, the park was at what everyone regards as its lowest point: poor attendance, long-neglected maintenance, poor rides (nobody has records of there even being a single adult roller coaster). They bought the park figuring to close it down and turn the point into a real estate development.

But this proved controversial, and politically complicated --- the governor of Ohio proposed having the state take over Cedar Point, almost as if Rye Playland were writ large --- and they decided it was easier to run Cedar Point as a good amusement park instead. I learn this from a 1969 profile in the [ Sandusky ? ] Record reprinted in two parts at this nostalgia blog, here and here, for the second part. Among the delights, besides learning that the Ohio government was ready to save Cedar Point, was learning that saving the park involved poaching people from Disneyland. This is a thing Cedar Point's done again and again; their current CEO formerly ran a division of Disney Parks Master Command. And that Legros and Roose had, in 1969, just lost some key people to Geauga Lake, and were trying to revive that moribund park. They would, for decades at least; Cedar Point's corporate overlords would finally buy it in the 2000s and while the park closed, many of its rides went to Cedar Point, Michigan's Adventure, and other parks in the chain.

Also that in 1969 it was still current enough to call Blue Streak --- then their only wooden coaster --- the Rollie Coaster. And their opening-that-year coaster was the Runaway Mine Ride; it's now the Cedar Creek Mine Ride. Legros's favorite rides were the railroad and the riverboat. The riverboat ride finally closed in 2011. And there are rumors about something ... riverboat-like ... coming next year, for the park's sesquicentennial. Legros also explained he couldn't ride the roller coasters, owing to his having had a heart attack some years ago. You forget that back then they figured a heart attack meant you couldn't ever do anything interesting again.

Trivia: STS-130, in February 2010, was the last night launch of the space shuttle program. Source: Safely To Earth: The Men and Women Who Brought the Astronauts Home, Jack Clemons.

Currently Reading: The Triumph of Seeds: How Grains, Nuts, Kernels, Pulses, and Pips Conquered the Plant Kingdom and Shaped Human History, Thor Hanson. Finally, a book by a seed expert who shares a lot about his time tromping around Latin America looking for seeds mentions coatis. (Just one sentence, about how coatis have joined civets as animals who'll be fed coffee beans to poop them out again, and serve those beans to people who are out of their minds.)

PS: Reading the Comics, September 21, 2019: Prime Numbers and the Rest, some comic strip mentions and also the heads-up to a mathematics paper that you might like to read yourself. Promise.

PPS: I took surprisingly few pictures on Sunday at Motor City Fur[ry] Con 2018, but what I have, I'll share with you. 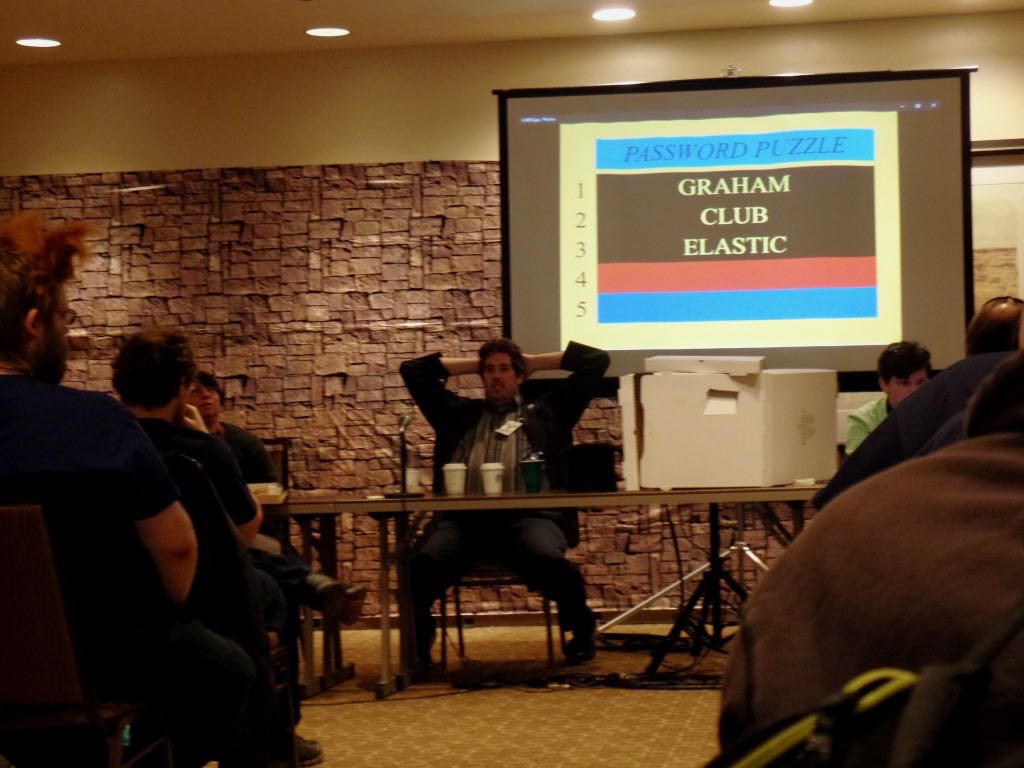 An event we dropped in on: Furry Super-Password. Played like the 80s game show went, with each password once guessed serving as part of a greater puzzle. What words fit these three? ... I don't remember. I'm sorry. I know at least one of the password puzzles was for Monty Python but this doesn't quite fit that. 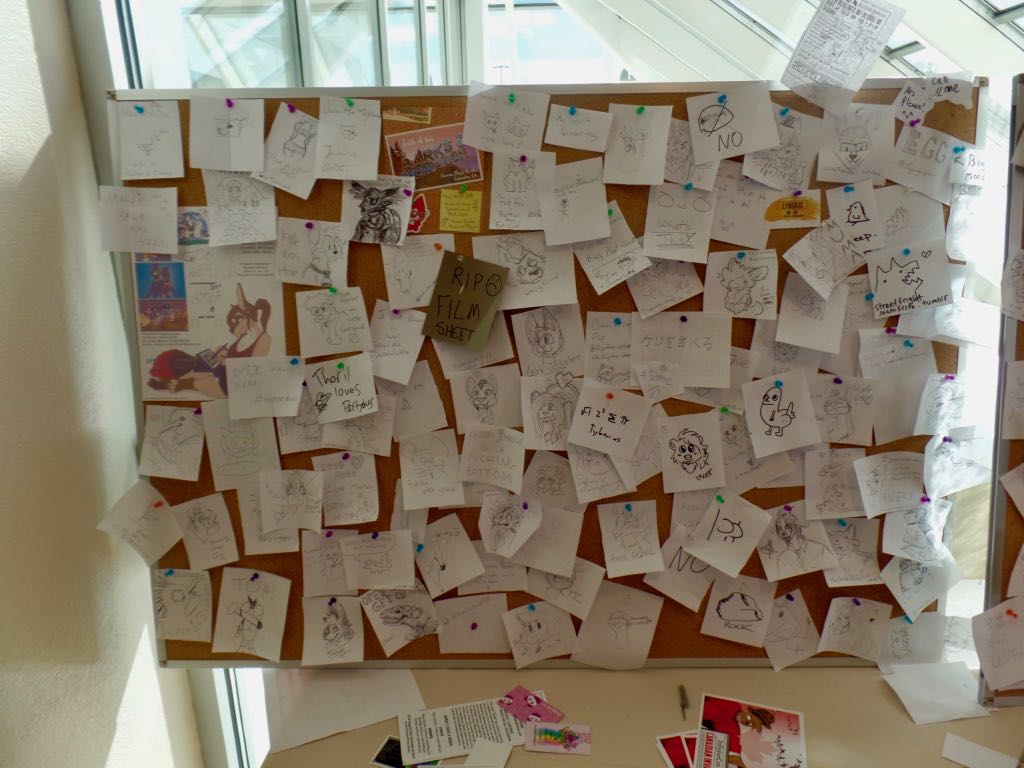 Message board, pretty well filled up to the point by now. 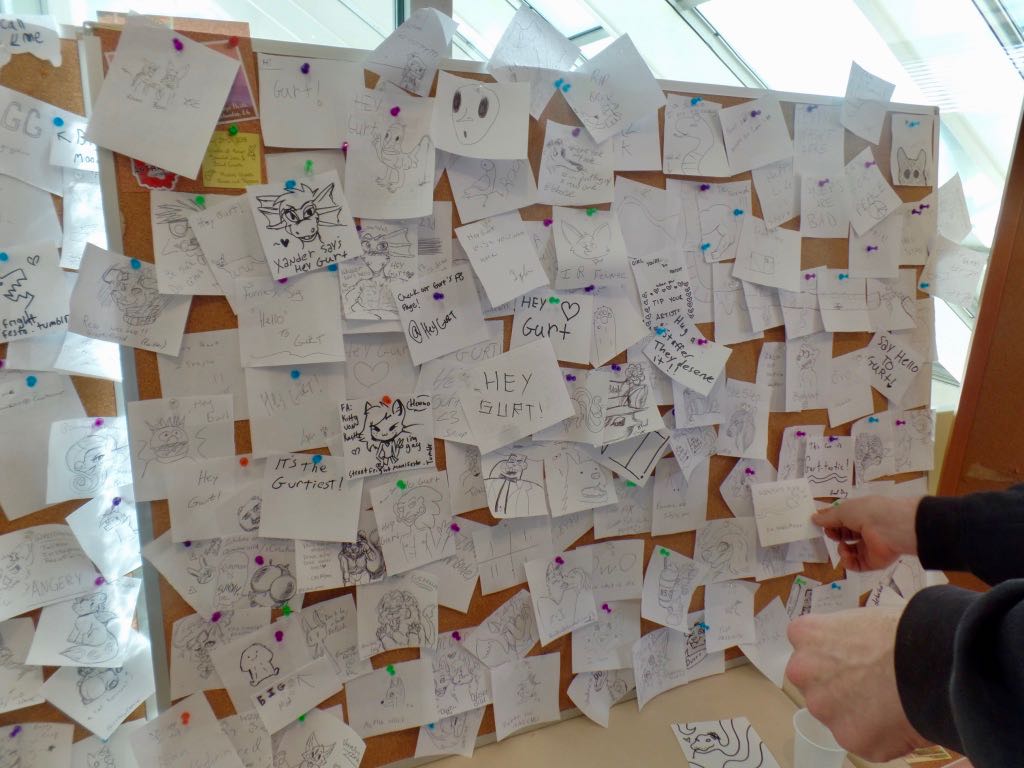 The other half of the message board. I hope Gurt heard people were looking for them.