That hiatus where I had nothing to talk about ended quick enough. This weekend we ended up doing a lot of pinball. PAT, an eastside player, has a basement of electromechanical and early solid-state pinball machines, and wanted to try hosting a tournament, and so decided to hold an ``Old School'' tournament. Eight rounds of match play with all older games. He has two ``modern'', games, ones with dot-matrix displays and multiball and all that. They're Getaway, one of the weaker entries in Williams's 90s Golden Age, and Wipeout, a baffling 90s Gottleib mystery. The rest, though? Games like Stars, which always clobbers me, or Kings Of Steel (another card-game themed one), or Close Encounters of the Third Kind (the solid state version; this was also made as an electromechanical).

PAT's house was this lovely cozy little house that looked like it was from the late-50s or early-60s, cramped but feeling nostalgically home like to both me and

bunny_hugger. The basement was furnished enough that there was a bed there (for PAT's brother, I gathered). There was also a tiny food and water dish we noticed in the kitchen, entering, and worried that PAT had a cat and

bunny_hugger hadn't brought allergy pills. No, just a small dog who was mostly delighted to have so many people to interact with, although his tolerance for so much of people did seem to drag as the day went on. Possibly because we were not prone to tossing him scraps.

So how did the tournament go? Well, in my first round, I was on Boomerang, a mid-70s electromechanical that I've known and gotten to love in old Pinball At The Zoo tournaments. Plus once at Pinburgh. And I had a good game, but was playing JMA, that kid who creams everyone, so I ended up in second place.

bunny_hugger was put on Getaway, opposite several people including PAT who, yes, owns the game. The table played far faster and weirder than any of the other Getaway games she'd played, and she finished last, demoralizing her at the start of a tournament she figured to do pretty well in.

That's just one round. It set the tone, though. I would never get on a table I felt at a loss for. I'd even have some fantastic finishes, such as a crushingly good game of Stars. (This one against MWS, who came back from two god-awful balls to, at his last chance, work his way up to third place.) And I'd even get some great bits of luck, winning at least two rounds by razor-thin margins.

bunny_hugger --- despite winning her own game of Stars, by the way --- had a bunch of third-place finishes. And one last-place finish, naturally in the round where she played against me (I got second place). Her last round, the last chance to make it into any kind of playoff, was in a group with MWS, GRV, and JMA, who are the third, tenth, and seventh-ranked players in the state right now.

So. The eight rounds of play ended with

bunny_hugger sunk to 20th place; the top 16 players would go to A and B Division playoffs. (One player, JMA's father, had to leave early so actually the 17th-place person went on.) She spent the rest of the day cursing her incompetence. She did finish ahead of BIL, who's the ninth-ranked player in the state, and only one point behind MJV, twelfth-ranked. But that's still cold compensation and she went for a walk around the neighborhood, for exercise and to clear her mind. She also ran across the streets already elaborately decorated for Halloween, amazing to see and feeding her longing for more holiday decorations and Halloween observation on our block.

And me? Well, I'd had a really good day. By this, I mean, I went through all eight rounds without a last-place finish. I had four rounds finishing in second place. This all was good enough to seed me third for the A division playoffs. Which was great, because this meant I wouldn't face JMA, who'd won every single game he played except for Getaway. (On Getaway he finished fourth, beaten by MJV.) We played three games and once again I just didn't finish last, a reliable enough play that I went on to finals, as did MWS.

In finals, yes, I had to play JMA. Also CC, a guy who plays on the eastside and who I never met before that I remember. JMA was not unbeatable this round, and I even squeezed out a first-place win on something. It was MWS who crashed out, sad to say. CC would get third place, and me? ... I finished the last round tied with JMA. We would play a tiebreaker for the championship.

Well, he had the pick of game, and he picked Wipeout, which is exactly the game to play against me. I had played one practice game on it when we arrived and only vaguely knew the rules. Gottleib games of this era only vaguely have rules anyway. I picked to go second, trusting that if nothing else I'd pick up some strategy from watching him, and he had a very good strategy: start multiball, collect jackpots, and collect the Super Jackpot for a hundred million points. It's a tall order, but it's one that I could repeat --- oh, my ball drained. The second ball went like that too, only faster for both of us. The third ball? When a Gottleib game of that era guarantees you a multiball? Well, there I could step up and --- oh, that's drained then. So, I'm 0-2 in tiebreakers for the #1 position in a tournament, although

bunny_hugger would grumble that fifty percent of those tournaments are Pinburgh division championships. (In the lowest division of Pinburgh.)

We would get souvenirs, besides my little trophy. PAT had several prizes and random draws for them.

bunny_hugger won the first one, a coffee mug made to commemorate the tournament. She would say, great, like she wanted to remember her performance in this, and everyone chuckled at the grim wit. The mug has pictures of the backglasses of the games we'd played. The next raffle prize was for a T-shirt, one from the birthday party (that we weren't able to attend) for PUF, who's a fun guy we unfortunately only get to see at Pinball At The Zoo and sometimes a BIL's Basement tournament.

And we'd get another weird comedic moment at the end of this. A couple weeks back in Lansing Pinball League we discovered (from the t-shirt he was wearing) that PS is also a viewer of the Greatest Generation podcast about Star Trek. Well, here, we overheard EJO make a reference to ``Anybody Canyon'', a running joke from Greatest Generation. It turns out he's been listening to the show from the start;

bunny_hugger and I are listening at two ends, the current episodes (they're up to season five of Deep Space Nine) and the back catalogue (we're around the fourth season of Next Generation). This gave

bunny_hugger the chance to do her own version of the podcast's Kevin Uxbridge impression, speaking of how she might eliminiate every Shrtikes and Shpares pinball game everywhere, much as she eliminated every Hushnock everywhere, to the delight of me and EJO and the utter, complete bafflement of MWS and of you. Trust me, this makes sense in context.

(Kevin Uxbridge is this secretly super-powered alien who, in a moment of rage after a Husnok warship destroyed the colony where he and his human wife lived, killed every single Husnok everywhere in the universe. It's a shocking solve-the-mystery episode of Next Generation. The podcast has turned this guy into one of their running gags, on the premise that he's always interrupting to talk about what he's doing, mostly creating Real Doll recreations of people the way he recreated his dead wife, with moments of thinking about how he could wipe out all of anything the way he wiped out the Husnok. The impression slurs his s's into sh's, which might even be inspired by something of the original performance. But after long enough an impression is an impression of itself, and has nothing to do with the original.)

There was also a fantastic moment of physical comedy. A guy playing for redemption on Getaway finally did well enough to hit --- well, I miss what he did. An achievement noteworthy enough that he cried out in cheer and threw his arms up. And hit one of the fluorescent light bulbs overhead, knocking the bulb and its fixture off of the hooks holding it to the low basement ceiling. It swung around, dangling on the power cord, between him and the wall. He did catch it with the good timing of a guy in a comedy film. He lost the ball.

And that was the first of our pinball events for the weekend. I was pretty happy for myself, of course, but could do nothing to rally

bunny_hugger's spirits regarding her own talents and abilities and how people appreciate them.

Still. Sunday was another day, and another tournament. The weekend might balance out for both of us.

Trivia: In Athens of about the fifth century BCE the name of the tenth month of the year was Mounichion. Source: Mapping Time: The Calendar and its History, EG Richards.

PS: Reading the Comics, September 24, 2019: I Make Something Of This Edition, as I get to showing off comics from last week finally.

PPS: And now my photos get up to April 2018. April is the season of Pinball At The Zoo, which hosts the biggest tournament in Michigan, the one that's becoming one of the Major tournaments and drawing people from across the nation. 2018's tournament was not on the Majors Circuit, but 2019's was. 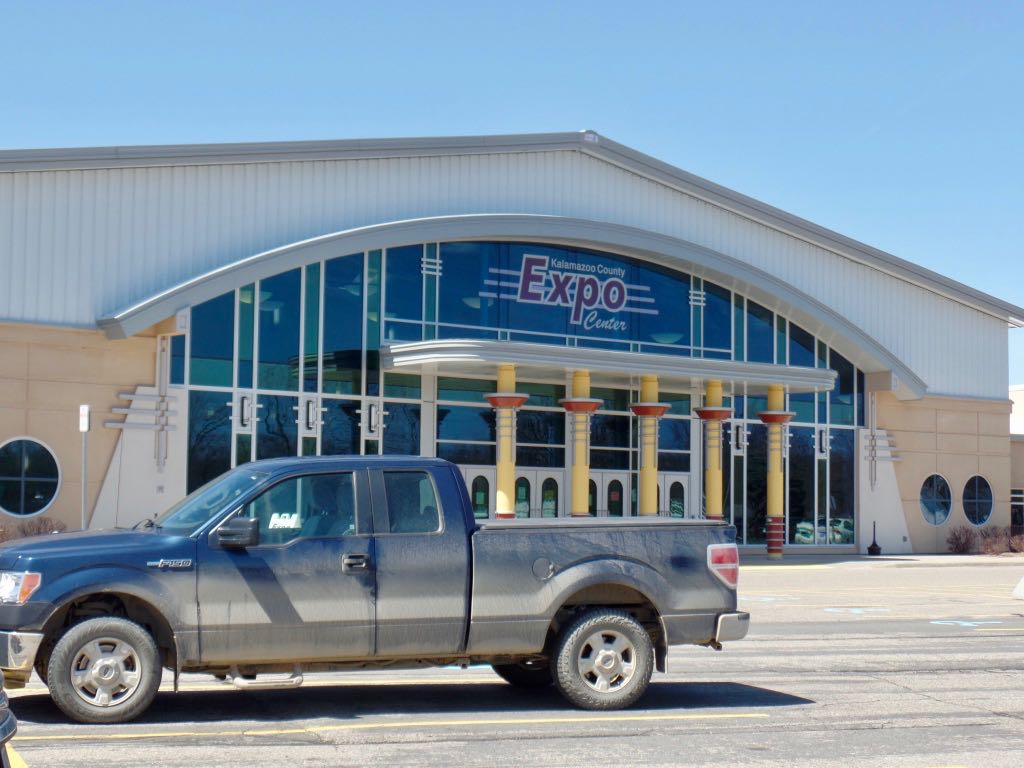 The Kalamazoo County Expo Center, home of the Pinball At The Zoo show and tournament! The expo center itself looks very much like what you'd imagine from the phrase ``County Expo Center'' but that's all right: the snack stand had this really great spinach-and-feta wrap and it's worth going to the show just for that. 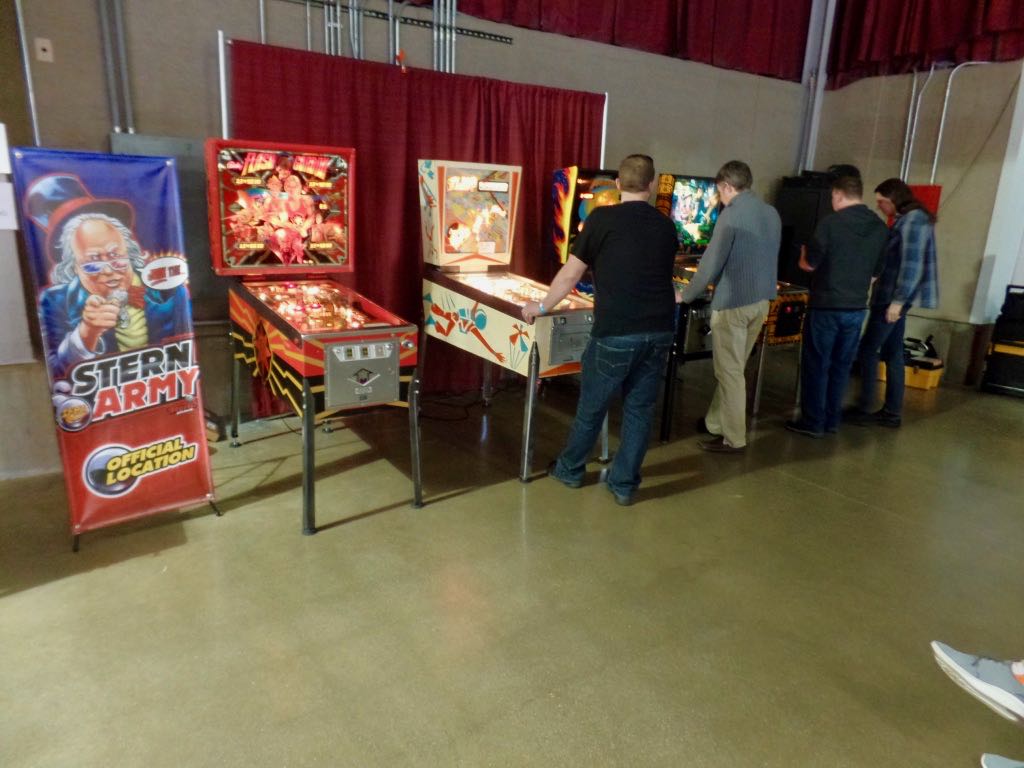 Players at work putting up scores on the Classics bank. If I'm not reading the scene wrong the guy in the black shirt and jeans ... on the right ... is recording a score for the guy in the plaid flannel jacket. 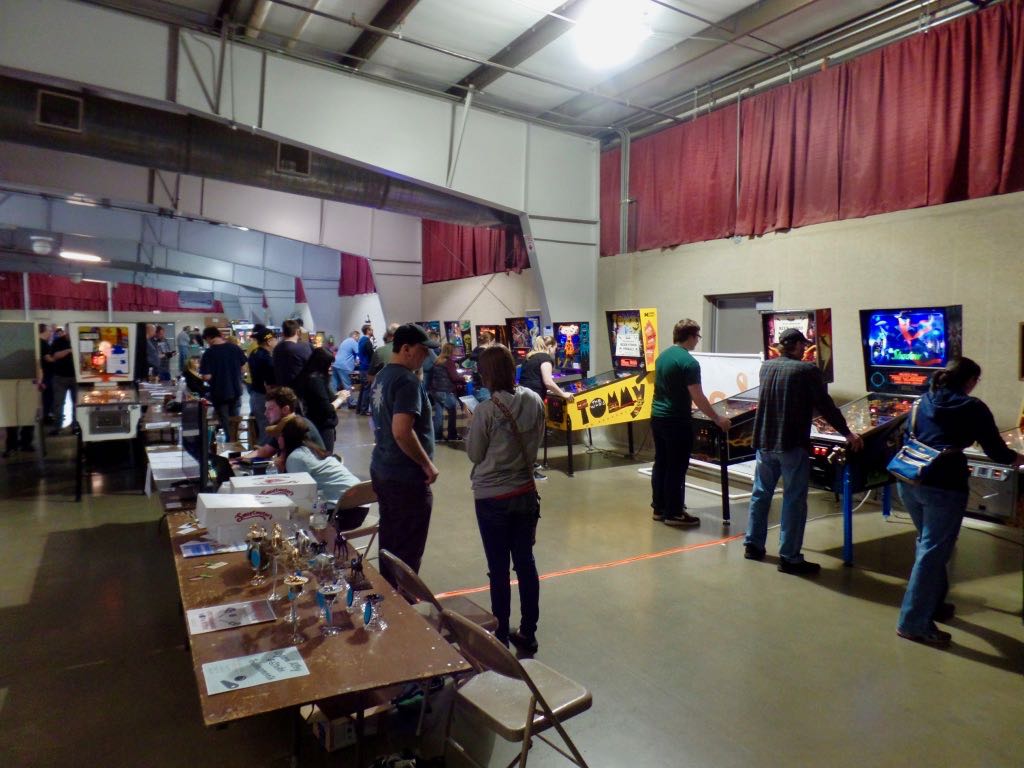 Here, a late-Friday view of people still putting in scores for the main tournament. Notice how many boxes of doughnuts they have. Every year PH and family, who organize this, get like 8000 doughnuts and tell people to feel free about taking them, and I feel shy about this until the last day when there's only half-doughnuts of the weird kinds left over.