Toward drivers who might cut him off or slide

And how about the tournament? Which we got to about ten minutes late. Fifteen minutes if you allow for our stopping in the bathroom and all that once we arrived.

Well, I had a happy day apart from one thing. My first round started out with my pick, and I chose Blackout, an early solid-state game I'd played in Pinball At The Zoo and Baby Food Festivals in the past. Like you expect for the era, it's about hitting drop targets and spinners, and I did really well at that, icing out everyone for the first game and getting that round off to a good start. This particular table was a new arrival. Mine was the first tournament game on it. It'd just arrived maybe an hour before, sold by MKS and her husband SAL to AJH. (We'd seen both husband and wife the day before and they mentioned selling the game.)

bunny_hugger would not have a happy day, which is the one thing that kept my day from being happy. She was knocked out in the first round, putting her into the group that would compete for the 9th-through-14th positions. We had worked out that she'd be reasonably sure to get into the state championship if she averaged a 7th or better in Fremont tournaments. Part of what was destroying her was a last-place finish on Blackout. This in a group playing against SAL, whom she complains she is never able to beat in this style of group play. It didn't help that they were playing on a table he knew intimately, but she had all but lost to SAL before that, too.

Well, she'd go on to play in the consolation brackets, to small consolation, and would end up in 10th place for the tournament. This just behind PH, who isn't actually always in the final four but is reliably there. Me, I'm able to squeeze my way through the second round and get into the final four, in part by getting to pick the last game we play, Johnny Mnemonic, and my squeezing out a win thanks to picking the 100 million point award from the tic-tac-toe ball lock. This makes sense in context. The final round AJH ran away with, which shouldn't surprise me, although the way I'd been playing I had thought I had a chance of my first-ever Fremont win. No, and I nearly lost second too. Ended up tying with someone else for second.

We had the choice to keep the tie or to play it out (the International Flipper Pinball Association only requires that the #1 position be uniquely decided) and I pushed for taking the tie. I don't think that I'd have gotten game choice. Even if I had, I'd already used up my picks of the five games I felt strongest on (and one of those I'd gotten creamed on). So taking the second means that we'll split the IFPA rating points that second and third place would have gotten. My opponent wasn't sure he wanted to just take the tie too (we both have to agree to it, to not play it out) and insisted on flipping a coin to decide whether to play a tiebreaker. But I won, so, while I might have missed out on a small number of IFPA points, I also missed out on losing a small number. I'm in a position where I can be cavalier about the difference of, oh, 0.65 IFPA points.

bunny_hugger had a miserable weekend as competitive pinball went, and regretted all the time she spent at it. But there wasn't any reason to expect she'd have lousy finishes in either and no way to know how she would do until she played it out.

Driving home through Grand Rapids we forgot that we could have stopped in town and gotten Impossible burgers at Stella's. Along the way we had to pass through an intersection between an Interstate and a US Route that's rated as one of the ten most dangerous intersections (per car volume) in the country. This we did without incident or mishap, or even noticing at the time.

Trivia: 14th-century European gunpowder-makers regarded the urine of a heavy wine drinker as good for making potent gunpowder. Urine from a clergyman, or better a bishop, was also considered to give a better blast. Source: Napoleon's Buttons: 17 Molecules that Changed History, Penny Le Couteur, Jay Burreson. (The urine was used for its water content, as part of making the final product manageable.)

PPS: OK, so here at Pinball At The Zoo ... some of the birth of pinball. Someone brought an actual pure-mechanical game from the 1930s, one of the oldest pinball machines with a tilt mechanism and everything needed to make it a game and not just a slot machine. 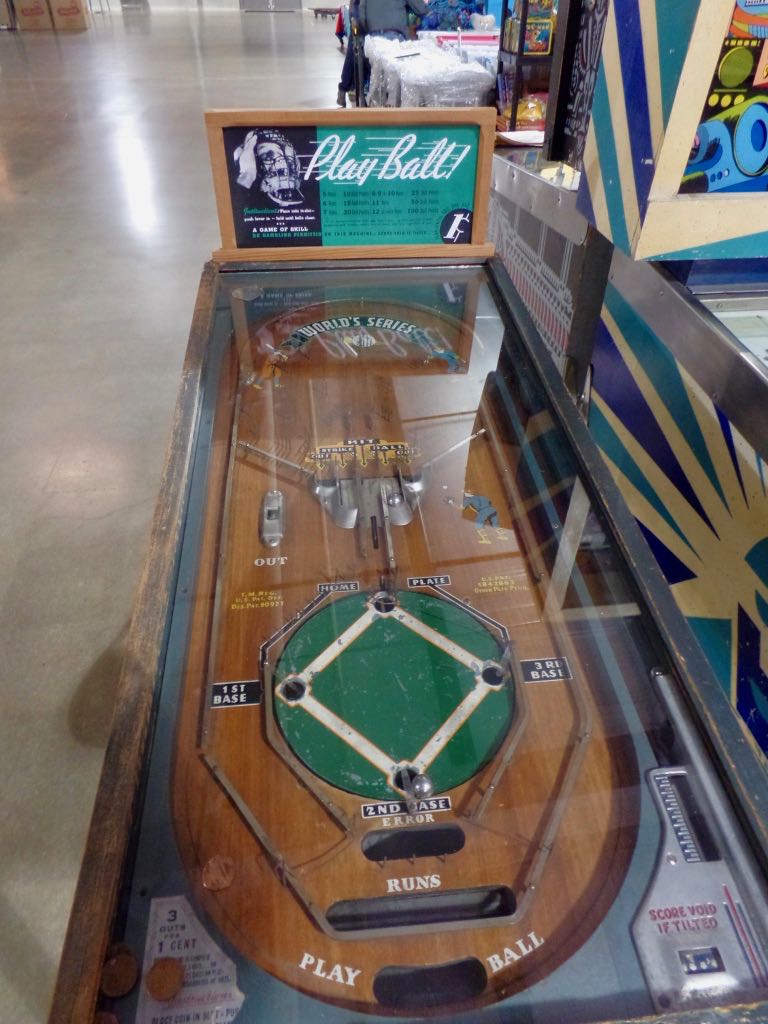 And here it is: World's Series, a 1934 game from Rock-Ola. Yes, the jukebox people. It's a flipperless game; you plunge the ball, and it rolls along the whole oval that's the outer ring, and then falls through lanes of pins to one many possible outcomes: a ball, a strike, a hit, a home run, an out. Something like 50,000 of these were made; it's still one of the highest-production pinball machines ever. 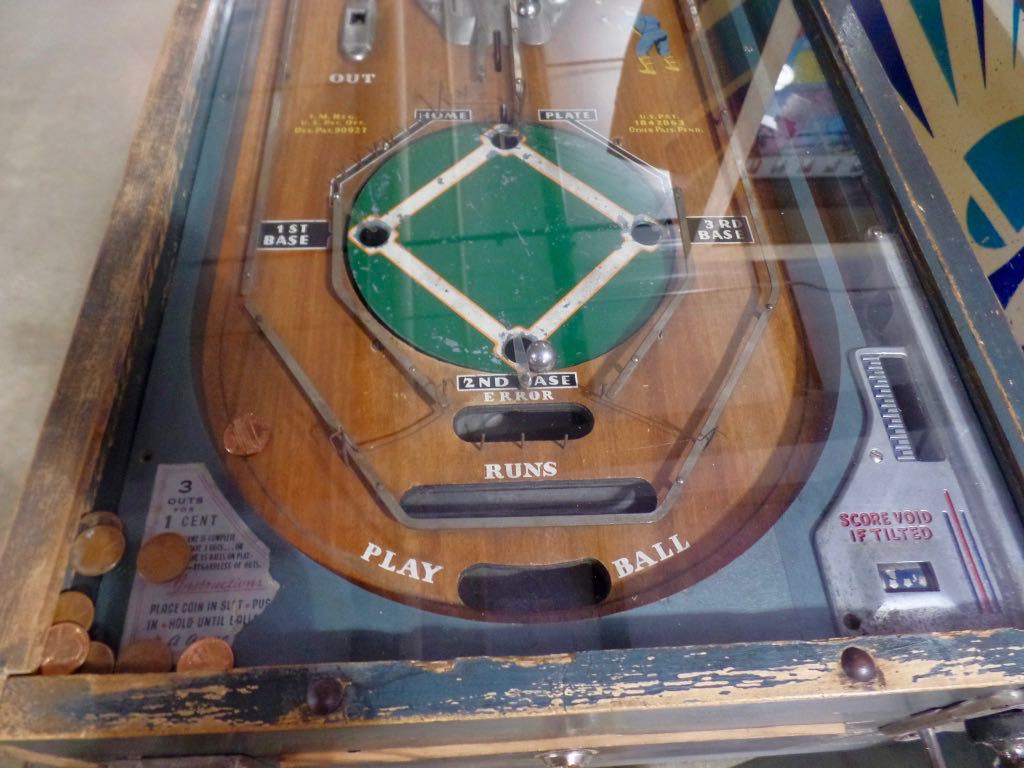 Note the 'Score Void if Tilted' in the lower right corner. The pure mechanical game had no way to stop the game if it tilted, but the player could at least be prevented from collecting a prize or something for an illicit score. The infield here would (theoretically) rotate 90 degrees with each hit, or 360 degrees with a home run, dropping steel marbles into the 'runs' bin, representing your score. It's an ingenious thing to play. Unfortunately it was a little out of level so balls wouldn't necessarily get diverted from the home plate hole to the 'runs' trough; this fate's seen here. Upper half of World's Series. You can kind of see the many pins that the ball bounces against. The Strike and Ball lanes were finely balanced things: two strikes or three balls could gather without the next ball being diverted to either 'out' or 'hit' and, and the lever dropping so that the other balls would fall underneath the table and be collected for the next game. You can kind of make out where the slots for the 'ball' and 'strike' are shorter on the left, so that the last ball and roll into the hit or the out lane. The switch in the middle of the 'hit' lane also makes the levers for 'strike' and 'ball' tilt, so that you clear the count for the next ball plunged.