One night I dreamed of New York 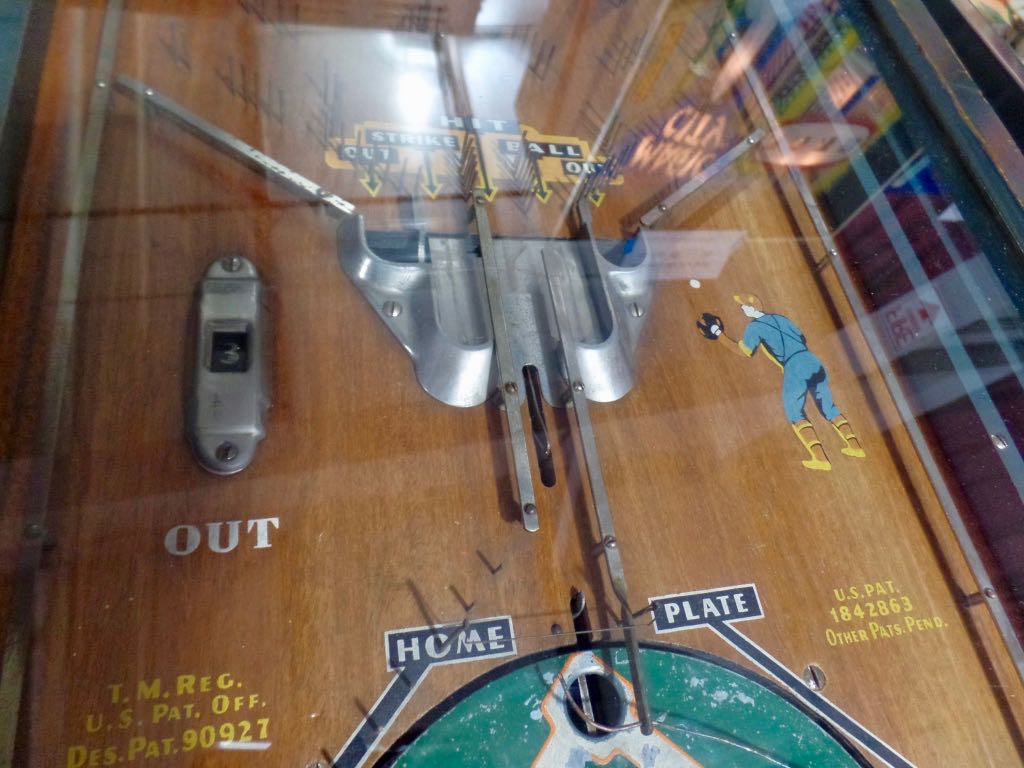 Middle section of the World's Fair pinball. So you can see the mechanism that adds up strikes and balls and outs. Also the dial that reports how many outs you've gotten --- three ends the game --- plus one bit of art on the playfield, in a spot the marbles can't roll over. 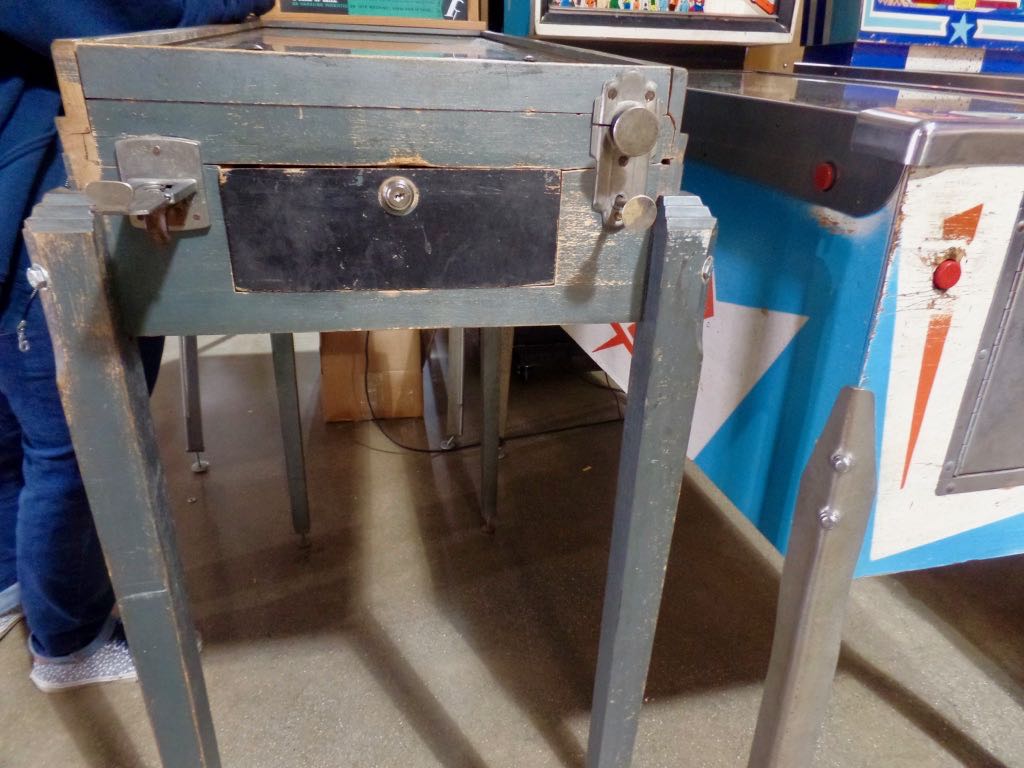 Looking at the front of the World's Series pinball. The coin slot is on the left. The upper disc is the plunger, pulled back and released to shoot a ball into action. The lower disc is another plunger that pushes one of the 15 balls in the trough up into the shooter lane. Pinball machines had this until the early 60s. 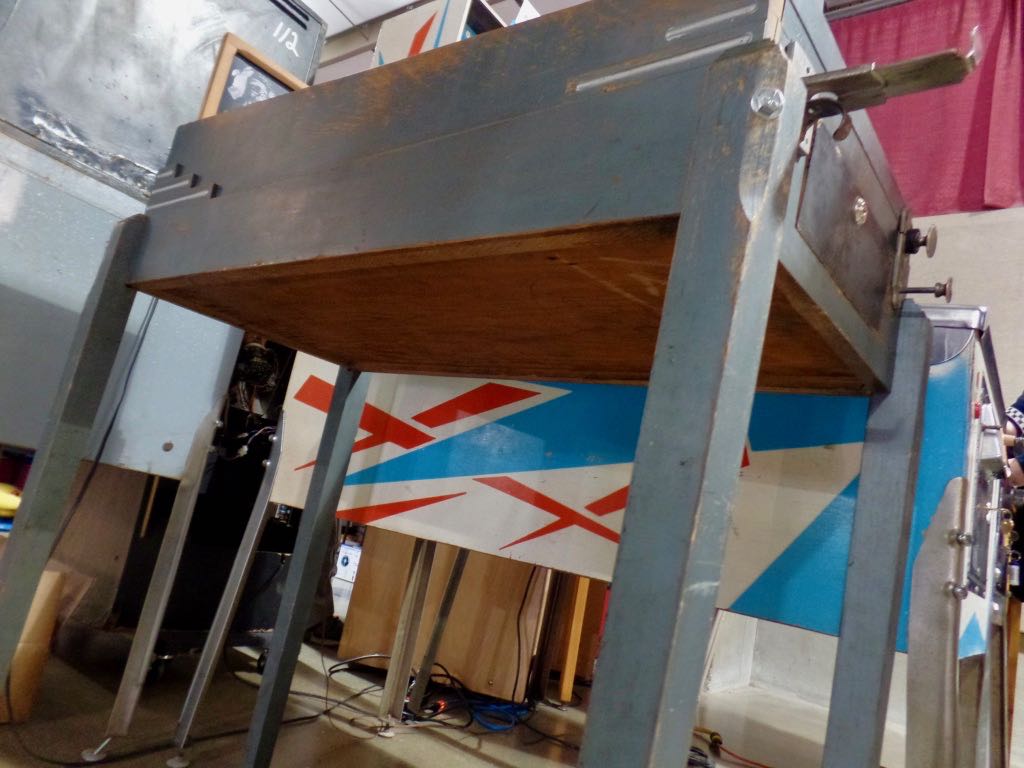 I thought to check underneath, to see if there was anything interesting about the bottom of the World's Series pinball. There wasn't, really. Games with electricity will often have a power switch inside a little circular recess, on the plunger side of the table. (The very newest games, the ones with LCD screens, have a power switch underneath the right edge of the backbox.) 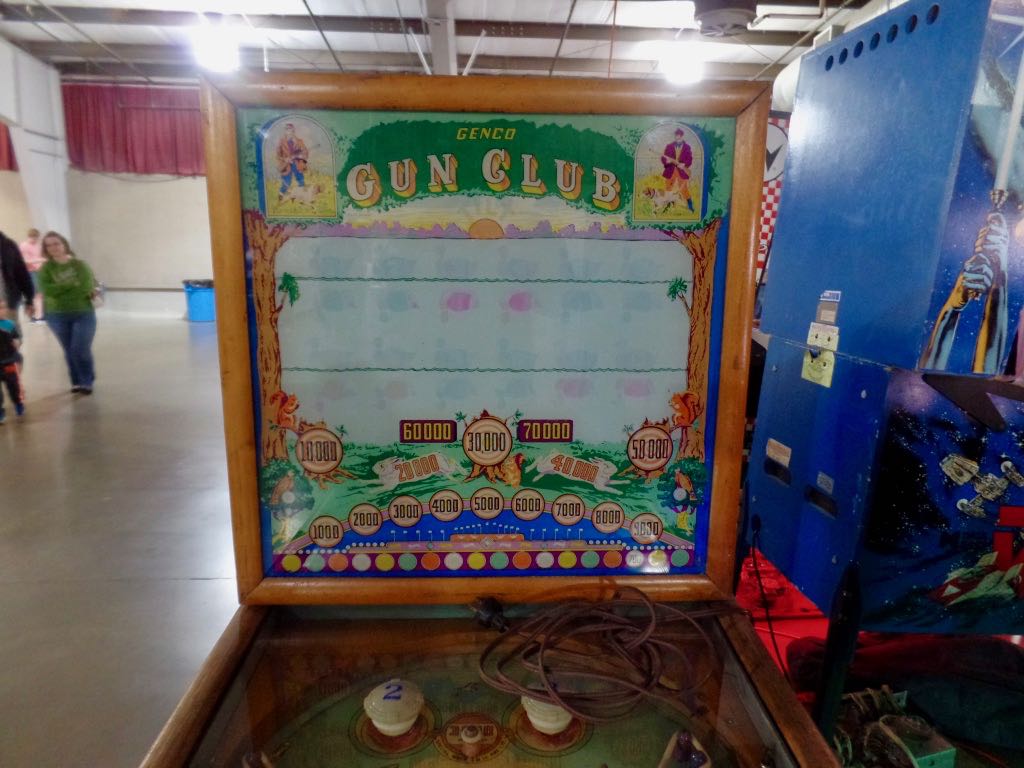 Another flipperless pinball, Genco's 1941 Gun Club. Unfortunately not plugged in; the game had backglass lights that correspond to bumper hits. 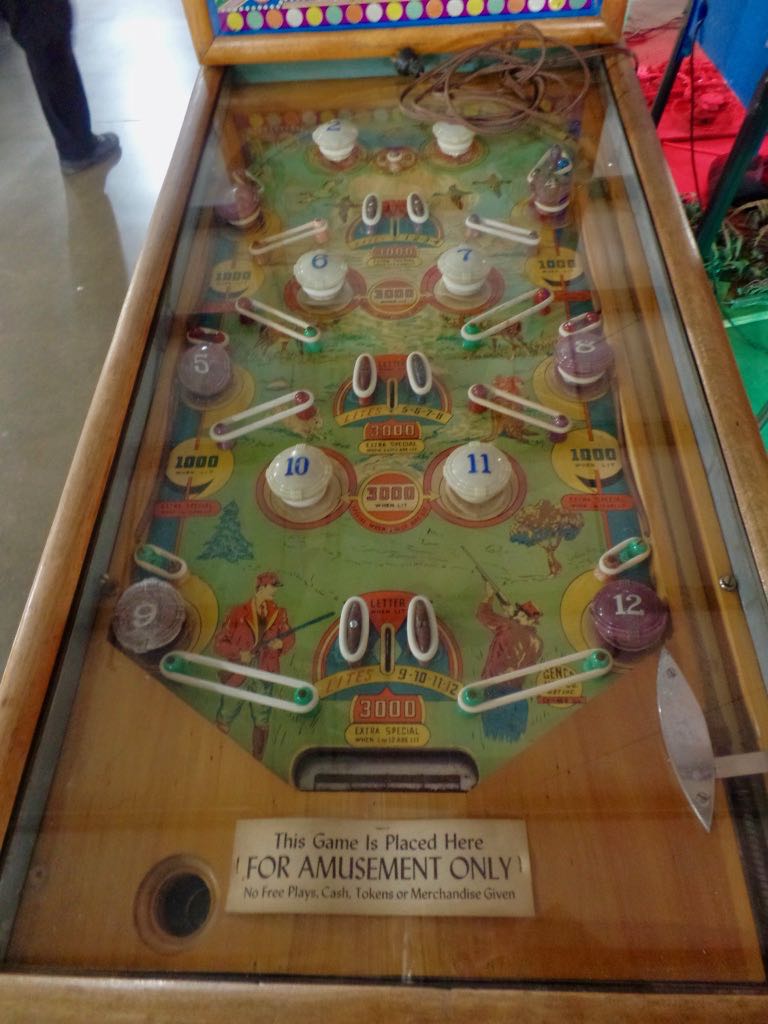 The playfield of Genco's Gun Club. As you see, no flippers. The bumpers were passive, too, not the modern jet- or pop-bumpers that shoot the ball back where it came from, and there don't seem to be kickers on those rubber bands so this would have to be a very slow game of plunging and tapping the sides. 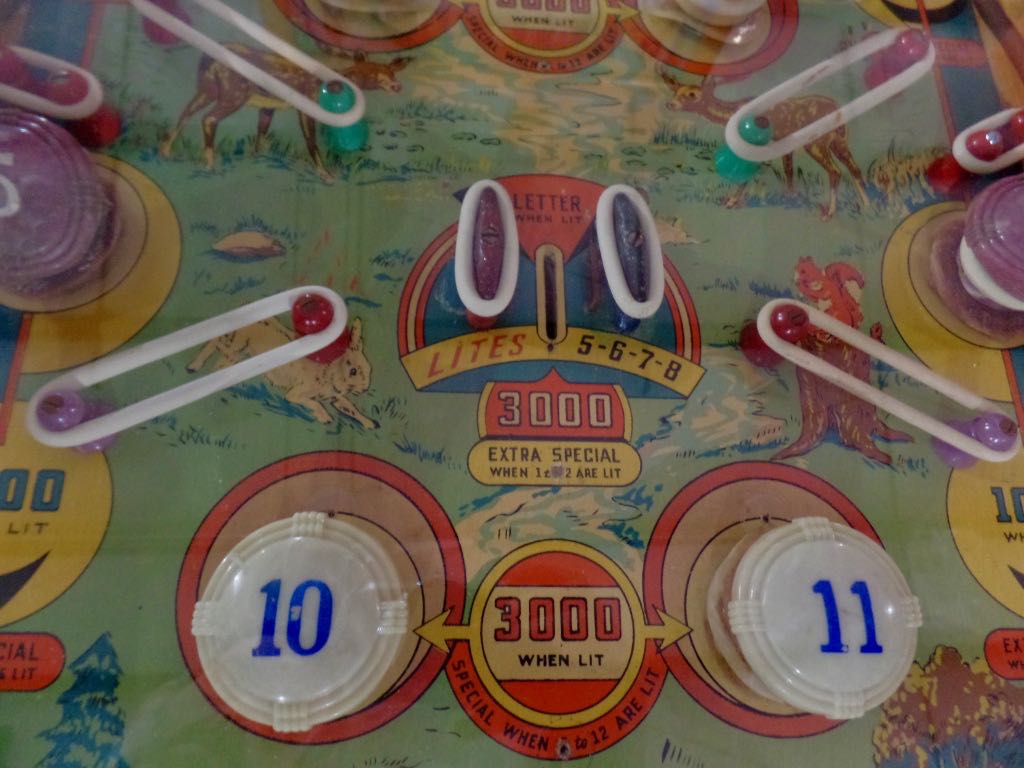 Detail from the lower playfield of Gun Club. So hey, it is at least one of the few pinball games with bunnies and squirrels, that's something? 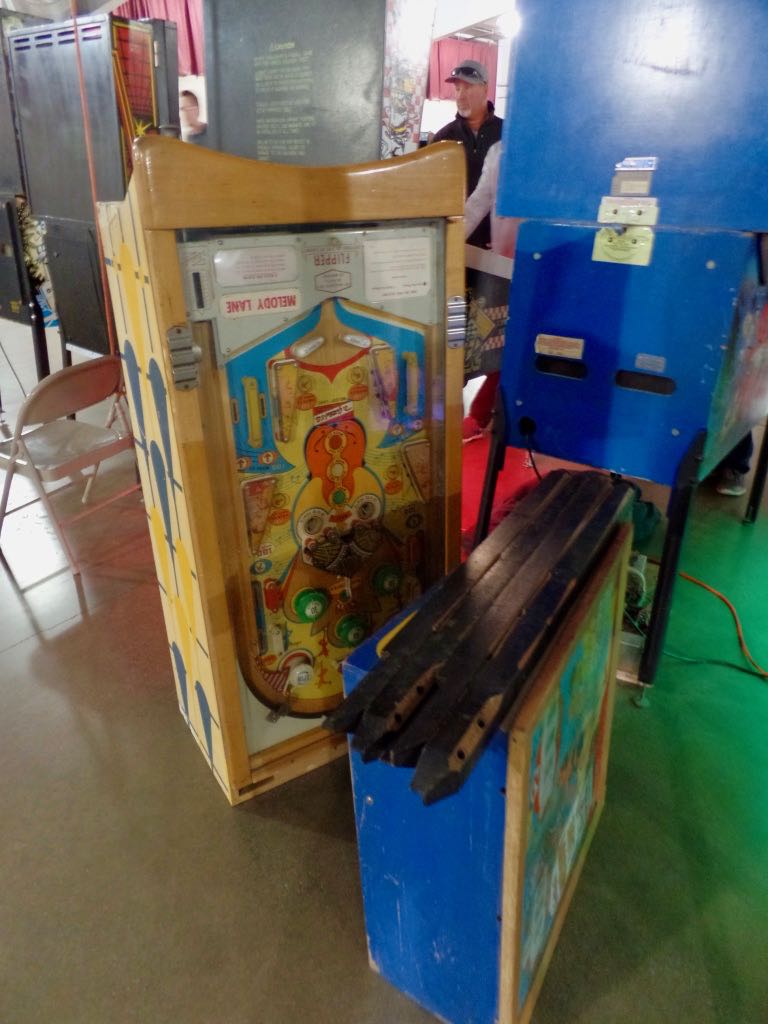 Pinball vendors clear out early on Saturday. Here's games already being disassembled and ready to be shipped out. 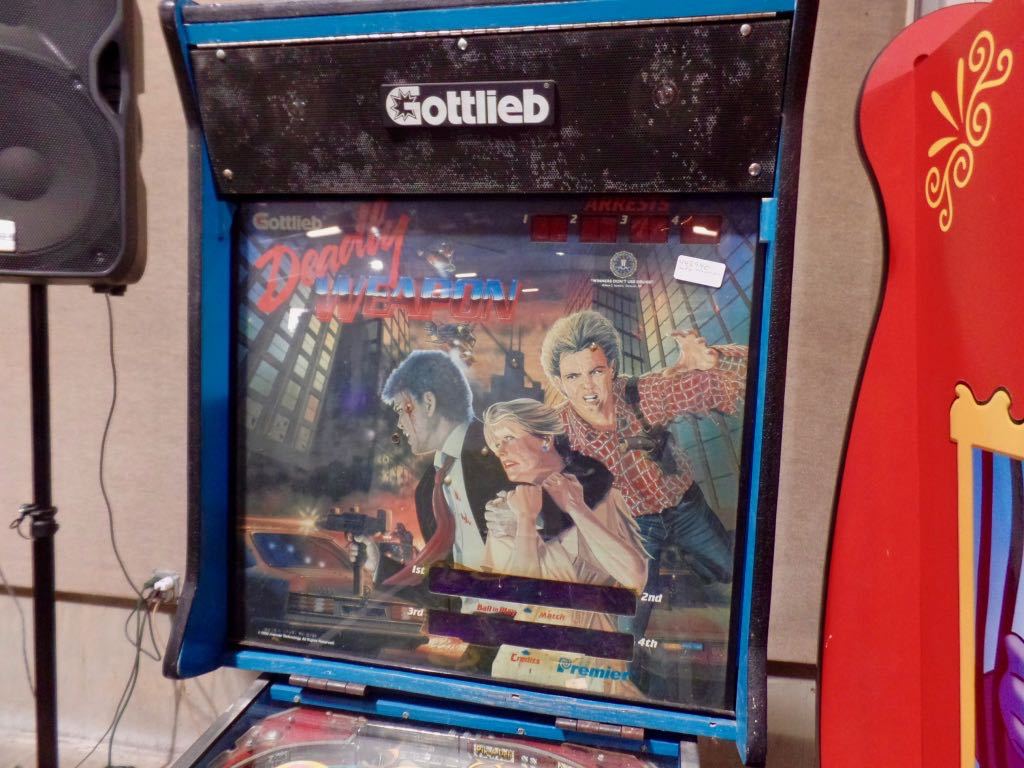 The folks at Gottleib/Premier didn't see any reason they had to pay for a movie tie-in license when they could just make up their own stuff! 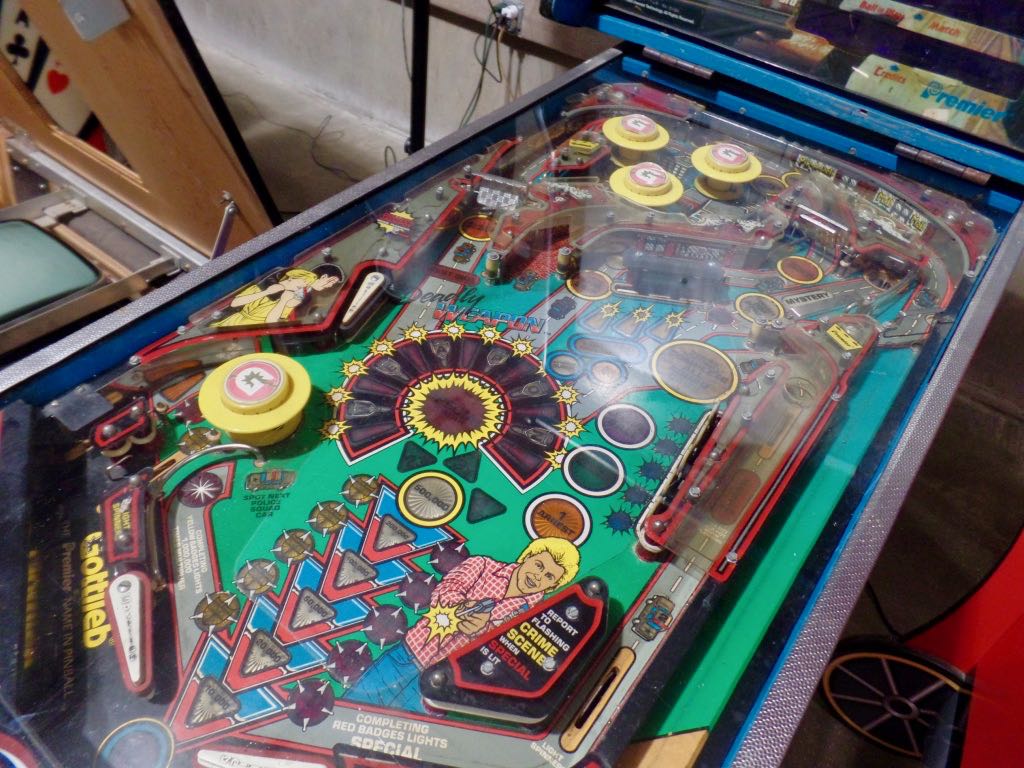 Playfield for Gottleib's Deadly Weapon, which ... curiously hasn't got any ramps on it. It must've had a multiball, given the era, but it's a surprisingly flat layout anyway. 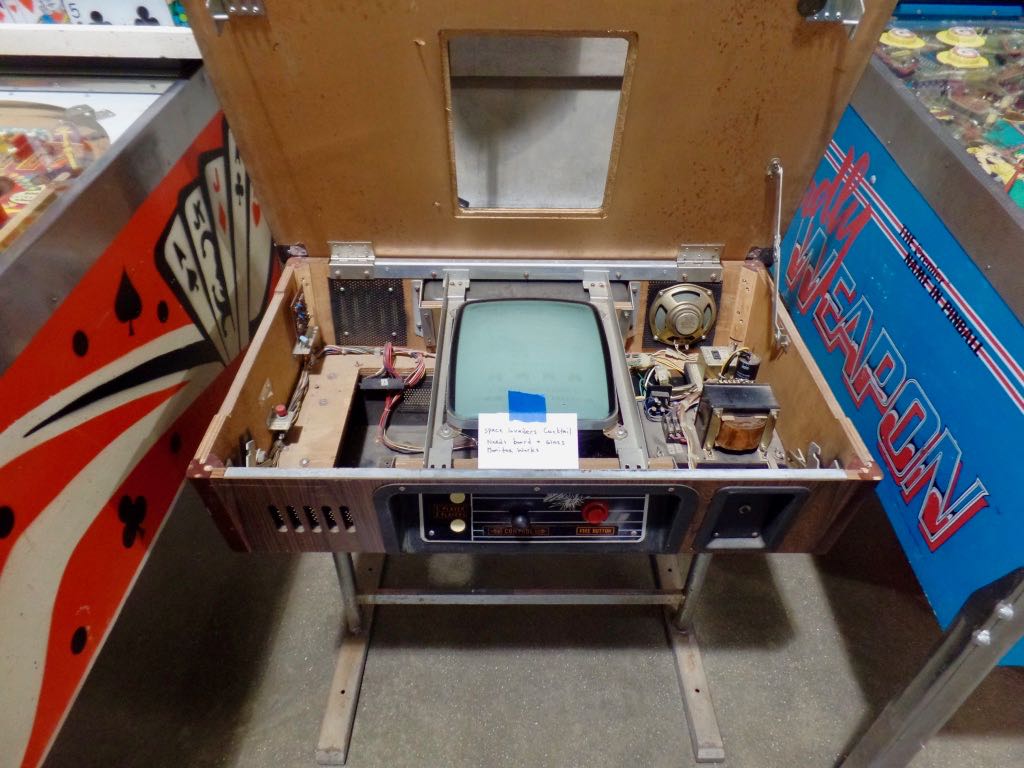 For sale: the cocktail version of a Space Invaders game. You get to see inside, too, and confirm that all the components are there. 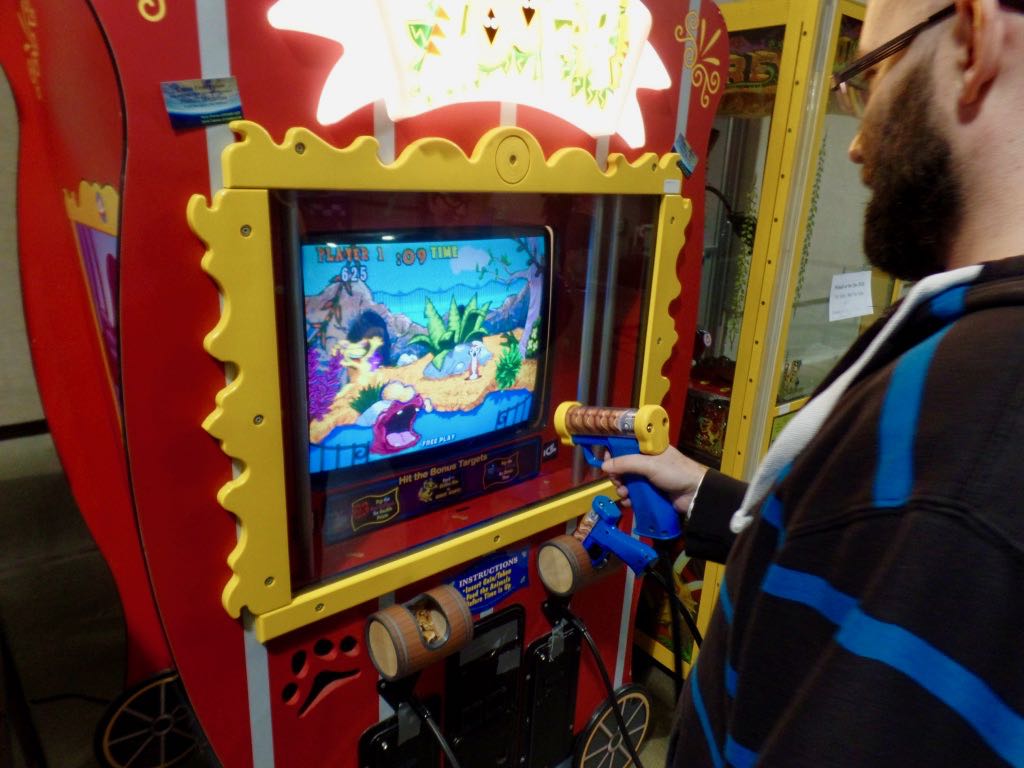 So here's an arcade game put up for sale. It's a shooting game, but it's themed so that what you're ``really'' doing is shooting food at hungry zoo animals. We joked that this was the game for CST, whose real-life job is veterinarian, and then we noticed the contact information said yeah, it was his game. 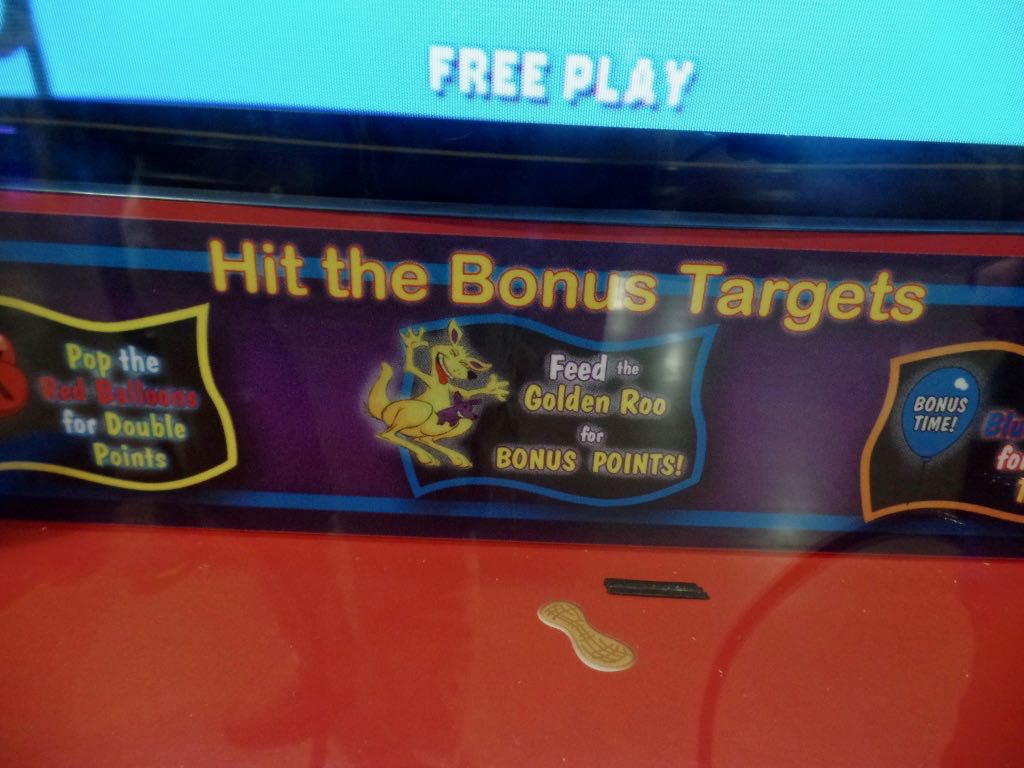 Among the instructions for that zoo-feeding game: feed the mother, Golden Roo, but under no circumstances feed her purple child, I guess is the implication.

Trivia: The first train on the Camden and Amboy Railroad, founded 1830, to actually run from South Amboy to Camden did so in 1834. Source: Railroads of New Jersey: Fragments of the Past in the Garden State Landscape, Lorett Treese.

PS: Exploiting My A-To-Z Archives: Jokes, which was great fun. Most of my mathematics essays are decent, but would be like ten times better if I struck half the jokes from them. This one? This one it was impossible to put too many jokes in. That was great.