Hide me in the back room, tell me when it's over

So, Sunshine has been acting a bit weird lately. She hasn't been reluctant to eat, which is the important thing. But otherwise?

She's been digging a lot, lately. She's always liked scrunching up the throw rug underneath the sofa, part of her digging her way underneath the sofa. But she's been digging up the fleece that's within her pen. It's like she's trying to nest, which would make sense if she still had the organs necessary for that. Maybe she just still feels the seasons that strongly. I think she was doing a lot of nesting behavior last year too.

The digging would be fine except that she's also getting territorial. We need to go into her pen for various stuff, some of it rabbit care, some of it not. Like, just winding the mantle clock. But we only have a limited while before she'll hop over and nip our feet. This helps us remember to keep our socks on, but still. It's hard to even know how to discourage this, since we, being sensible, get out of her way and that is what she wants from this. I'm hoping that it's a side effect of whatever's got her nesting so intently, and that it'll pass when she isn't preparing for the baby bunnies that can't be there.

She has not only been annoying, though. She has always been a happy, energetic bunny, one fun to watch. She's still prone to flopping out on her side and exposing her belly. She has always run joyful little energetic laps of her cage. The one thing that she doesn't, though? She doesn't bink, an expression of bunny joy in which a rabbit leaps up and flips around in mid-air.

Except, that she did. I had gotten up first, as I often do, and was downstairs while

bunny_hugger was still in bed. I looked over Sunshine, who had run around a little. And then she did a perfect bink, leaping straight up as if by magic and then twisting 180 degrees around to land again. I was delighted. And taken by surprise; if I had been the slightest bit ready I'd have given her some treats to encourage that.

She's been her usual bundle of energy and

Trivia: The postwar Strategic Bombing Survey's research indicated that at the very end of the war about 29 percent of the German population still wanted to continue fighting, 24 percent claiming never to have wavered in their resolve and about five percent having wavered and then regained confidence in the conflict. Source: Why The Allies Won, Richard Overy.

PS: Reading the Comics, October 4, 2019: Glances Edition, comic strips which exist and that's all I have to say about that. Of course one of them gets into calendars so I get verbose. It happens. 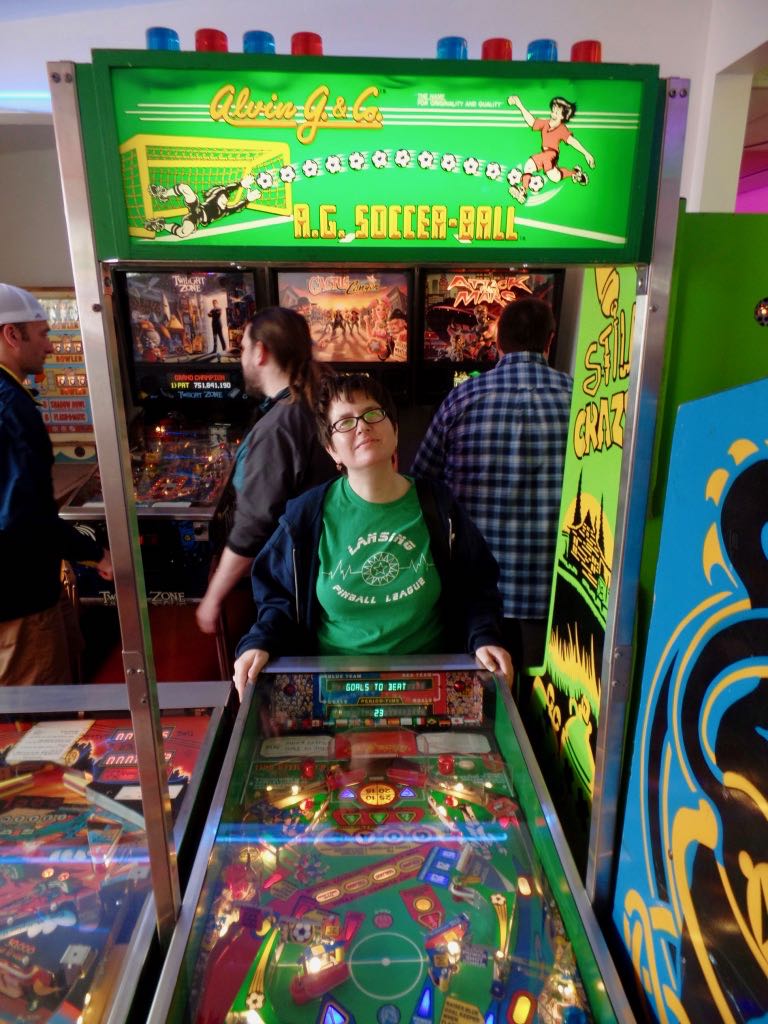 Alvin G and Company was a short-lived company made by the refugees of Gottleib Pinball's final bankruptcy in the 90s. So you can see why in those trying times they would ... try to make a two-player pinball, the occasionally-attempted solution to a problem nobody actually has. Anyway, 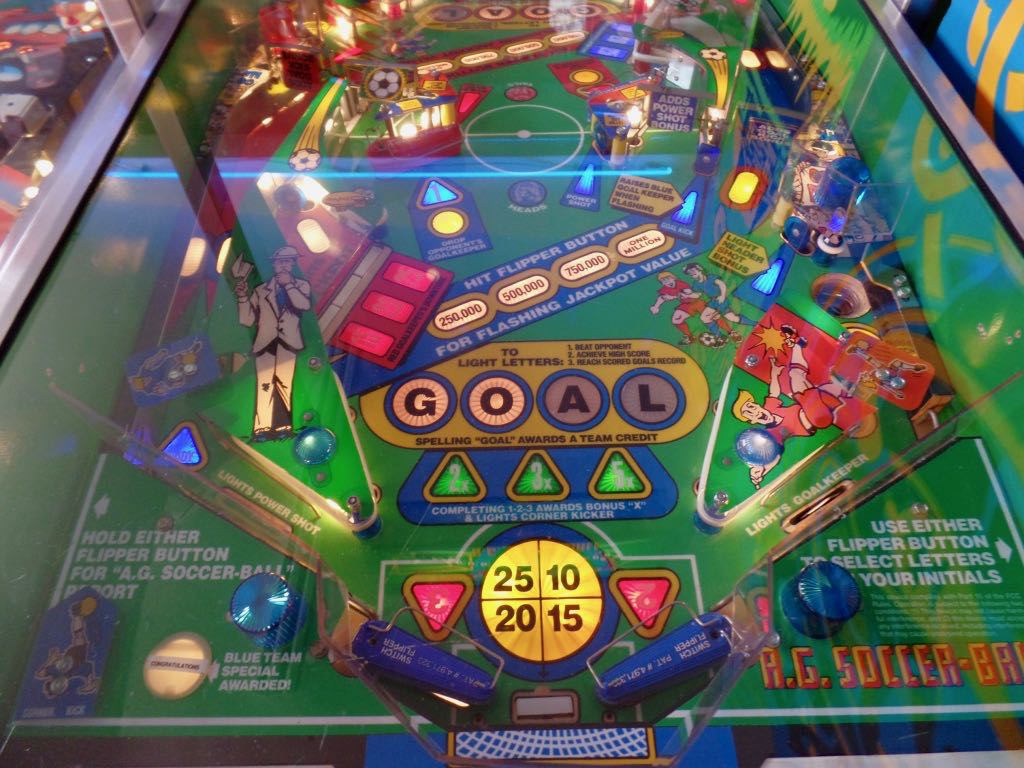 Lower half of my playfield on the Alvin G and Company Soccer-Ball. The other side has the same layout; a ball shot too hard down the center goes into the opponent's play. 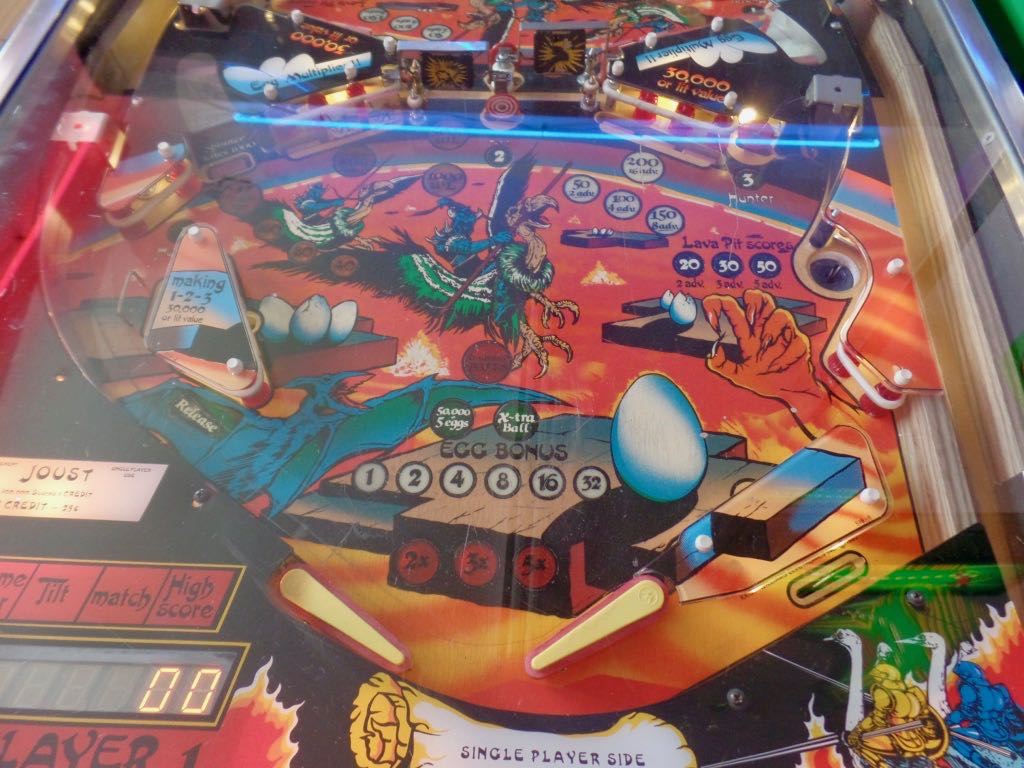 And here the lower side of the Joust two-player pinball game, which similarly has a very short and mirrored playfield for the competitors. It does use the same sound effects as the video game.