When I fell in love down at Palisades Park

bunny_hugger e-mailed me explosive news last week. Premier Parks, owners of the Six Flags chain, had put up a bid to buy Cedar Fair, owners of Cedar Point, Michigan's Adventure, Dorney Park, and other such parks. Terrifying news. Not that we like everything about Cedar Fair, but we like the way they run parks more than we like Six Flags's. Well, just look at how the carousels are maintained at, say, Great Adventure versus at Cedar Point. Decades ago Six Flags made a similar bid for Cedar Fair, and got shut down right away. This time? There wasn't such a fast no, and a meeting between Cedar Fair and some group of their own investors got postponed. Unsettling stuff.

Thing is, park operations preferences aside, there'd be good sense to it. If we take the axiom that a bigger company is better off, a Six Flags/Cedar Fair merger would make sense. The companies are in the same line of work, after all, and run parks that are of comparable size and complexity. And both operate mostly in areas that the other chain doesn't. The places where they have parks near one another are in the Philadelphia/New York City metro area, San Francisco, and Los Angeles. These are places that can support several regional parks.

The bubble burst a couple days later. Cedar Fair said Six Flags wasn't offering enough money, and that difference in corporation structures would mean Cedar Fair shareholders would get a lousy tax bill after the sale, and there wasn't any way they could envision Six Flags avoiding that. Which is fine, although

bunny_hugger and I were hoping for a stronger statement to Six Flags, one including a phrase like ``... and the horse you rode in on''. Nobody thinks Six Flags could put up more money, though, not at this time.

(Still, if a merger is logical, it seems like Cedar Fair could go and buy Six Flags. It wouldn't be the weirdest turnaround play. Like I said, it's not as though a Cedar Flags chain would be obviously ridiculous.)

So we at least have that security in our beloved amusement parks. We need it, too. The past month has been bad for news of old places. Clementon Park, in South Jersey, abruptly closed in the middle of September, just before a Customer Appreciation Day (customers showed up to locked gates). They cancelled their Fall Festival. They haven't been selling season passes for next year. Their Facebook page was deleted and their Twitter gone private. There's rumors about the park being up for sale.

Clementon is owned by Premier Parks LLC, which annoyingly is not the Premier Parks that owns Six Flags. It's the one that owns New Elitch Gardens outside Denver, and that up until 2018 operated Darien Lake.

And that's not the only park that we've visited to be going away. Coney Island Cincinnati is removing all of its amusement park rides, to focus on its water park side. This is not the first time it did this. After Taft Broadcasting used the name and rides of the original Coney Island to open Kings Island, what remained --- mostly the swimming pool --- stayed open while the company thought what to do with the land. But in time new rides came in, and the swimming pool regenerated an amusement park around it. The park, which can trace activity back to 1870, is staying open I suppose, and that's good, and obviously anything might happen in future.

Lakemont Park barely exists anymore but says they'll open Leap-the-Dips next year. Bowcraft is closed. FunTown Pier's owners might still be talking about rebuilding but I don't see how anyone can believe that.

But it's hard to avoid the feeling that the amusement park ecosystem we're used to is contracting. It's hard not to feel there's doom here.

PS: Exploiting my A-To-Z Archives: Knot, which would really seem like something that doesn't need explaining, wouldn't it? Well, live and learn.

PPS: More hanging around the VFW. 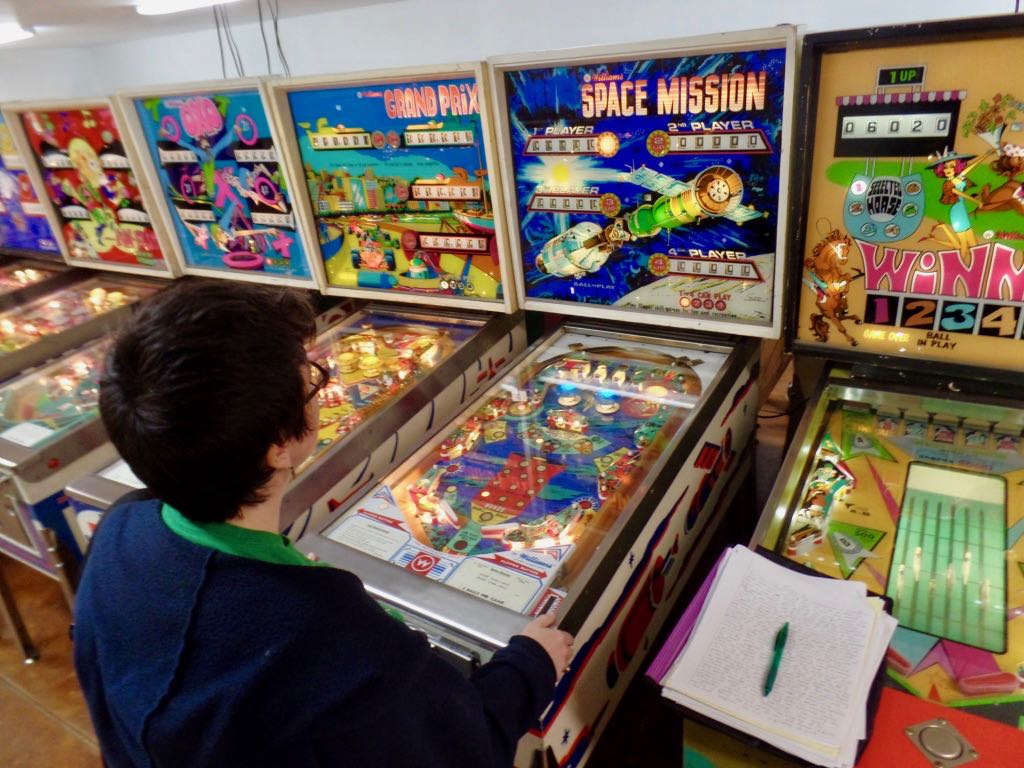 bunny_hugger playing the Apollo-Soyuz-themed Williams game Space Mission. The pile of papers next to her are stuff she had to grade because there were not enough days in the weekend to both spend a day at the VFW and get classwork done separately. I can't tell you how afraid I was that she'd lose something, but, she did never did. 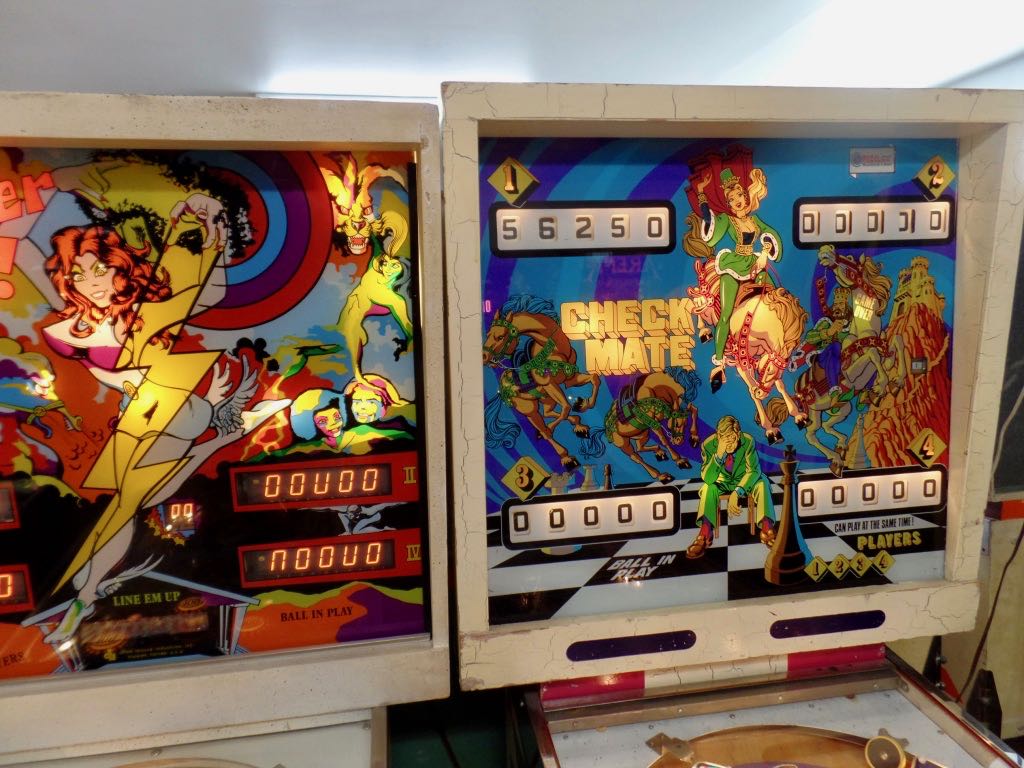 Spanish company Recel's 1975 game Check Mate, with a backglass that makes you wonder ... wait, why is the guy so miserable over a chess game? It is just a chess game, right? 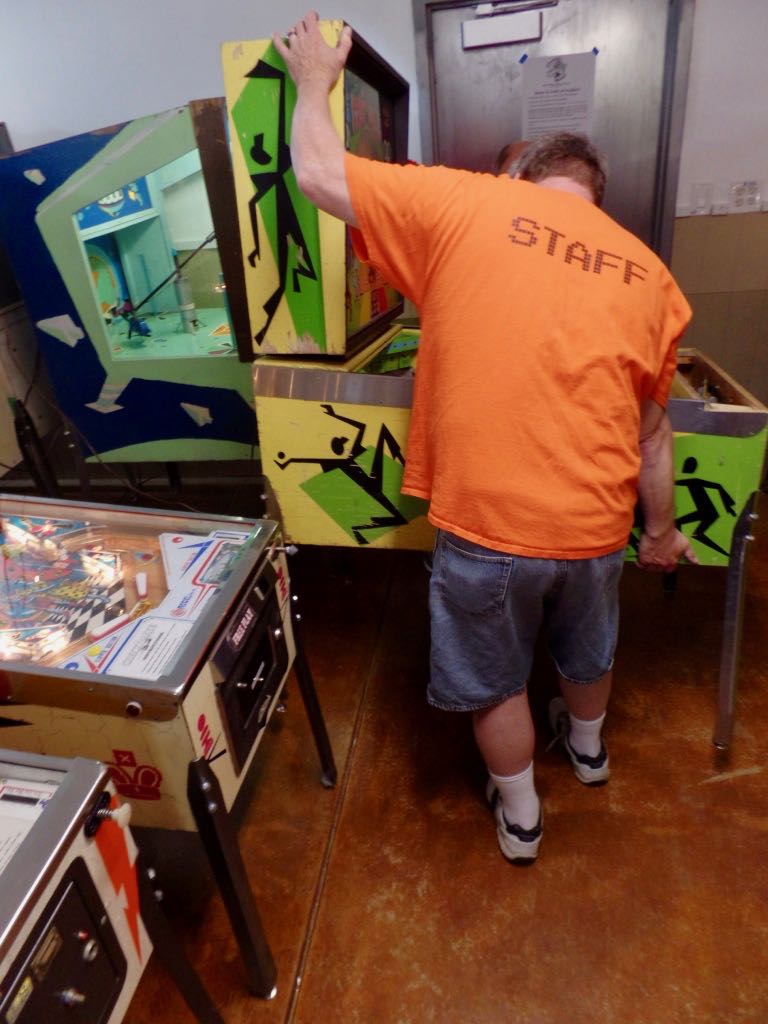 Emergency repairs on one of the older games. The VFW as a private club presses like all its members into service for repair work on open house events like this.