So there's this YouTube channel called Nick Knacks, which is trying to do a documentary on every series ever run by Nickelodeon. This got me thinking about Nickelodeon's Special Delivery series. Wikipedia has a list of premiere dates for at least some of the known Special Delivery episodes. (There's so little documentation nobody can be definitely sure about it.) The series was a grab bag. Some of the episodes were try-outs for shows that could go to Nickelodeon. Some were afterschool specials that the original production companies were getting a little more money from. Some concerts, in the early 80s. Some were just whatever was really cheap to air.

Wikipedia claims that in October 1982 they debuted His Majesty, the Scarecrow of Oz. More, it claims this was the 1914 film. The silent, black-and-white film that if you believe the credits was directed by L Frank Baum himself. (It was really J Farrell MacDonald, who would be one of That Guys in Preston Sturges movies of the 40s.) And I'm like ... just ... really?

I mean, I've seen His Majesty, the Scarecrow of Oz. I think it's the best of the silent Oz movies I've seen. It does well in being an Oz story, adventures with just enough danger in a loopy world. And, like, it's early 80s basic cable. You have to fill a huge programming hole, and without spending too much money on it, and public domain movies would do that. But ... still ... I mean, a black-and-white silent movie that's so utterly out of keeping with what anyone would imagine from The Wizard of Oz? Really?

I watched the Nick Knacks about Special Delivery. They don't specifically mention this. They have a couple second clip of His Majesty, the 1914 version, but that might just be that they copied from Wikipedia.

And just ... I'd like to think they showed something that singularly weird, since I like silent movies so and Wizard of Oz movies so. So far as I remember they never showed it when we got Nickelodeon, but that wasn't until 1984 or 1985 and some of these Special Deliveries just sank out of sight. Which might have been the fate for a 1914 movie, which I can imagine not landing with an audience that wanted to see the Depeche Mode concert or that special about roller coasters. But, if they were showing silent movies at all, why just the one? There's bunches of movies they could have shown. Or did they, and the record is just incomplete? Or did they just not work, and the experiment get abandoned fast?

It's just I feel down in my bones that it's more likely there was some other movie, like maybe a minor animated series, possibly something imported from Japan, that got given the title His Majesty, The Scarecrow of Oz, and that some well-meaning Wikipedia pedant linked to the 1914 movie without considering that there was, like, something made that half-century with the same title. But I certainly can't prove that either, not without someone turning up a videotape of what actually aired on Nickelodeon in October of 1982.

The whole Nick Knacks series is here, and I keep finding the documentaries thoughtful and informative. Most are about twenty minutes to a half-hour, with particularly important shows (You Can't Do That On Television) getting as much as an hour and a half.

Trivia: Paul, Bishop of Middelburg, heading a 1514 commission on calendar reform proposed not dropping days from the Julian calendar but rather changing the date of the vernal equinox to the 10th of March, an (incorrect) estimate for when the equinox was, and then in the future allowing the equinox to drift, changing date about every 134 years. Source: The Calendar: The 5000-Year Struggle to Align the Clock with the Heavens --- And What Happened to the Missing Ten Days, David Ewing Duncan.

PS: I'm Looking For The Next Six Subjects For My 2019 A-To-Z, a request for all you people who know of mathematics words but not what they are.

PPS: Have I photographed every backglass in the VFW? Will I make you look at every one of them? Let's just see. 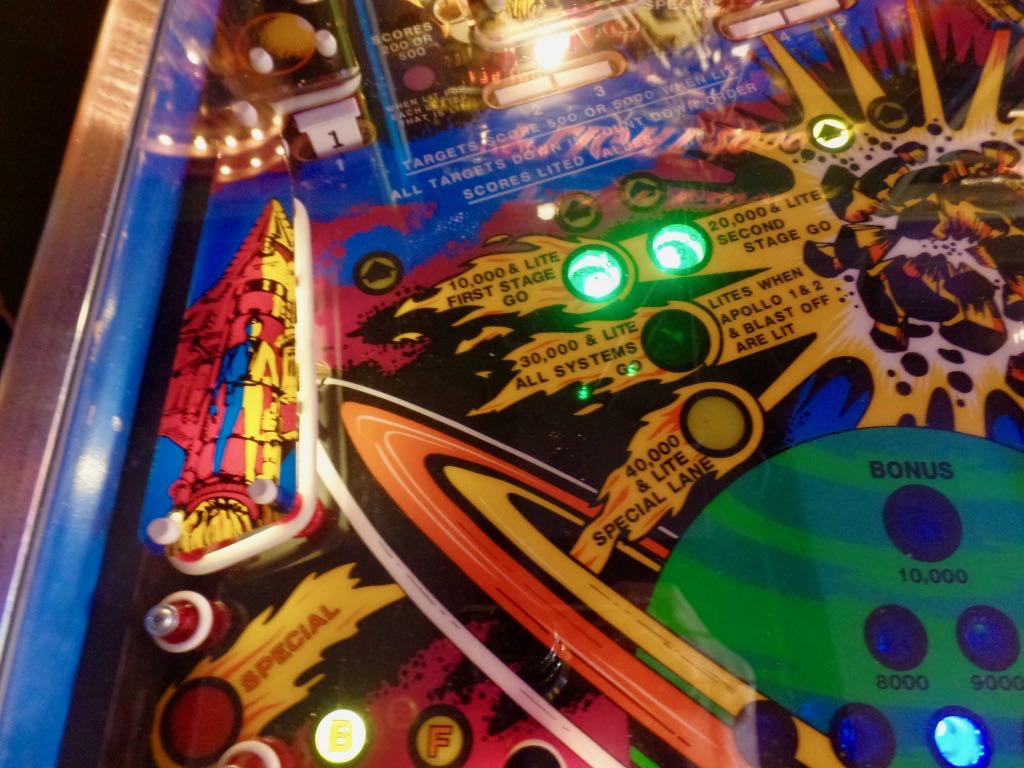 Little playfield detail on Flight 2000, an early solid-state game: a man who's painted onto or strapped to the outside of a rocket? They were doing some strange stuff in the early 80s, you know? 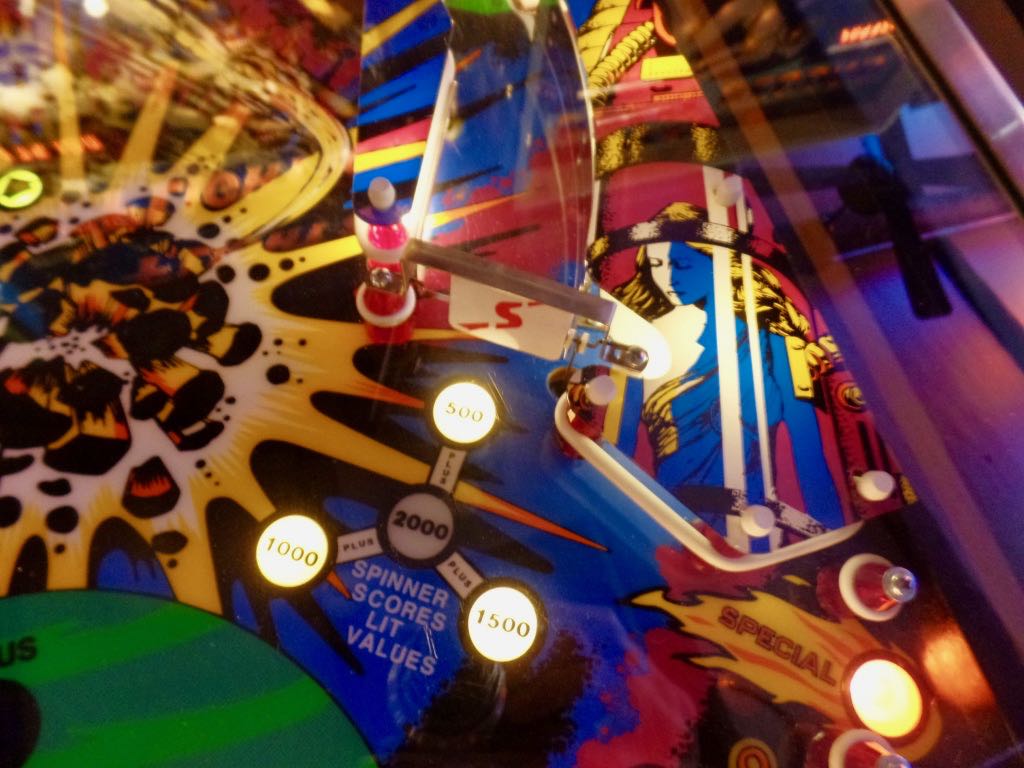 Oh, well, it's matched on the right side of the Flight 2000 playfield with this much larger woman strapped to the outside of a rocket. That makes good sense then, right? 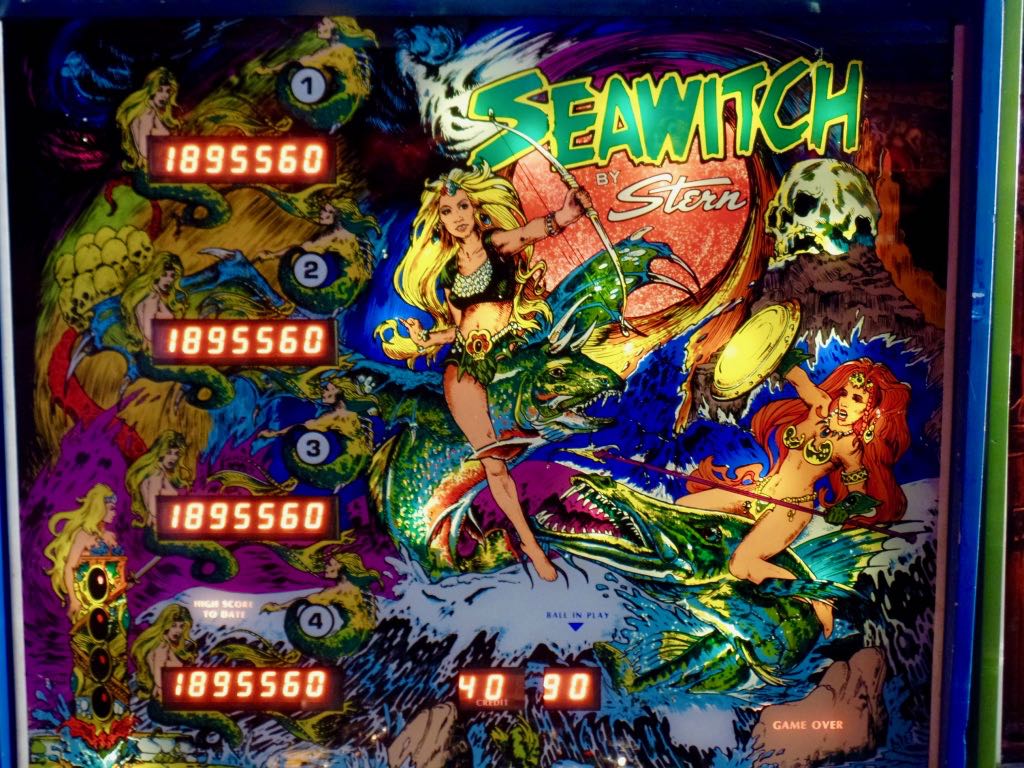 The backglass for Seawitch, an early 80s Stern game the layout for which was modified into the recent Beatles playfield. Question for the class: which character here is the Sea Witch?