Oh, so, anyway, I did find the Wild Rides episode of Nickelodeon's Special Delivery. It's on YouTube, of course, but I didn't find it there directly. This Nickelodeon fan blog collected it for me. The upload dates back to when you could only do ten minutes at a time in a video, which is kind of all right since each of the segments was about nine minutes before a commercial break.

Part one.
Part two.
Part three. (The sound gets flaky during the last song, but you can make it out yet.)

It's hard to pick a highlight from this but I'd have to give it to a roughly 14-year-old Matt Dillon. His line reads are those of a young man ripped out of bed at 5 am, and forced by his kidnappers to cold-read off cue cards being held by someone who doesn't know when to flip over to the next card either. Or possibly being asked to improvise a documentary about roller coasters, in which case he's doing a great job, but, wow. So. Every one of these is the take that they used.

One sincere delight of this is that there is a good amount of footage of a couple amusement parks, and particularly roller coasters, as they existed in the early 80s. Most of this, by screen time, is during music videos, themselves done in that Early 80s Music Video style of ``the director wanted to do this slightly dream-logic narrative and this is the New Wave song it's playing under''. My particular choice here would be the second video of the first segment, when (Somebody?) is playing whatever the song is has the refrain ``Nothing To Fear''; I can't work it out. The video is of a little kid bonding with a big, pale guy made to look like the monster of the swamp, on the Great American Scream Machine on Six Flags over Georgia. But, you know, choose your own preferred weird video. They're all fascinating stuff.

Another weird delight for me is in the second part when Matt Dillon says a serious roller coaster rider will not want to miss a certain amusement park ... one with ``not one but two coasters''. Yes, that legendary roller coaster Mecca of ... Barnum & Bailey Circus World in Haines City, Florida. Which ... uh ... well, a park doesn't need a lot of roller coasters to be worth the visit --- Seabreeze in Rochester has three, after all. But Circus World had two roller coasters, one a launched loop model like Lightnin' Loops (formerly of Great Adventure) or Sidewinder at New Elitch Gardens.

Circus World has been defunct since 1990. But these two roller coasters had a weird afterlife: Florida Hurricane, the wooden coaster, was eventually relocated to Magic Springs Theme and Water Park in Hot Springs, Arkansas, for some reason, and is still running according to the Roller Coaster Database. The other one, Zoomerang, the Lighnin' Loops-like coaster, eventually moved to Fun Spot Park in Angola, Indiana. After that park went defunct pieces of it were sold to Frontier City park, in Oklahoma City, to be used in their Diamond Back ... which is one of the two former Lightnin' Loops coasters.

Circus World isn't the only now-defunct park in the video. The last roller coaster in the video is Texas Cyclone, from Six Flags AstroWorld, defunct since 2005. Matt Dillon describes it as ``not the fastest, or the highest, but it is definitely the meanest I'm doing what you want please don't hurt my sister''. Texas Cyclone was a mirror image of the Coney Island Cyclone.

Dillon also mentions at the end ``the Zephyr, in New Orleans''. This ride, at Pontchartrain Beach, was a few years away from closing its long run. (The crest of its hill was moved to a city park, apparently.) And one ride I've actually been on got a mention: ``Thunderbolt in Pittsburgh''. Not Kennywood, but, there's not many parks in Pittsburgh you'd have to search to find that. This is an interesting mention though, as

And, of course, the coaster they started with --- Colossus --- isn't really there anymore. It was the roller coaster from National Lampoon's Vacation. Also Kiss Meets The Phantom Of The Park. And a bunch of TV shows. But it was converted to a steel coaster named Twisted Colossus, so I suppose that counts as half-there still.

Anyway, if you have a half-hour and want to see some SDTV footage of roller coasters while Matt Dillon hears for the first time the things he's been saying, this is certainly worth the time.

Trivia: Manhattan's first kosher butcher shop was owned by Asser Levy, a Jewish Polish man who lived in New Amsterdam at the time of the capitulation to the English. Source: The Island at the Centre of the World: The Untold Story of the Founding of New York, Russell Shorto.

PS: My 2019 Mathematics A To Z: Martingales, a thing that touches on financial mathematics, so that's always exciting stuff.

PPS: How about a little more VFW? Don't worry, this'll all be done around Thursday and we can move on to the next pinball event. 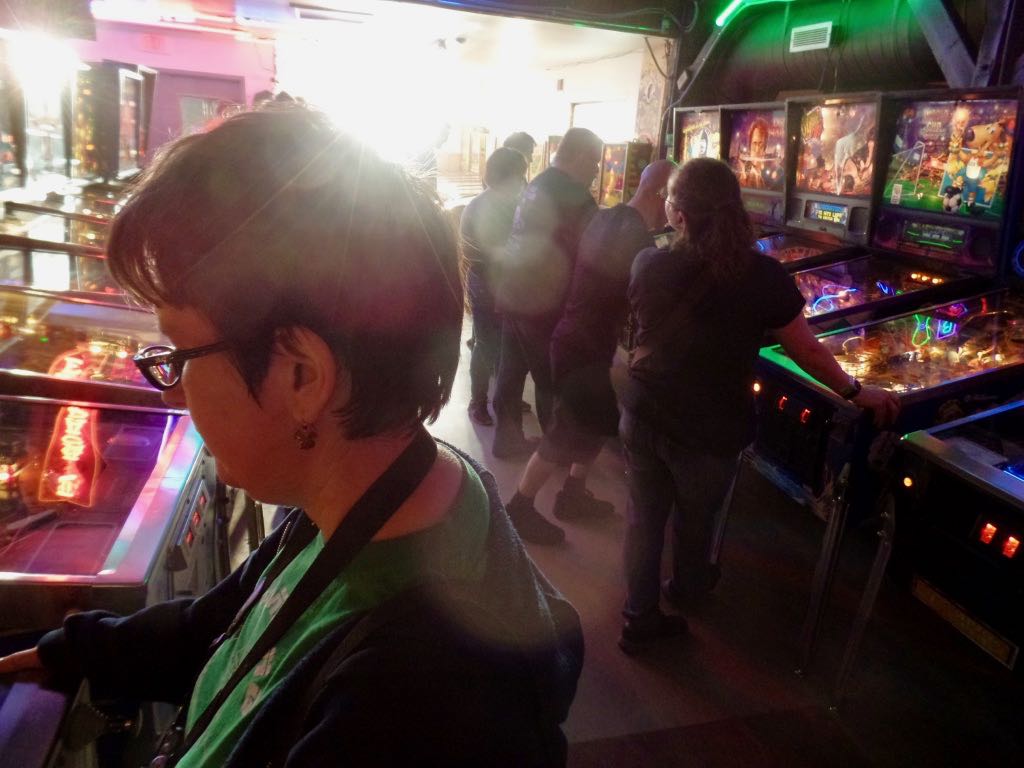 bunny_hugger catching a moment playing an early solid state game while outside the sun goes nova. 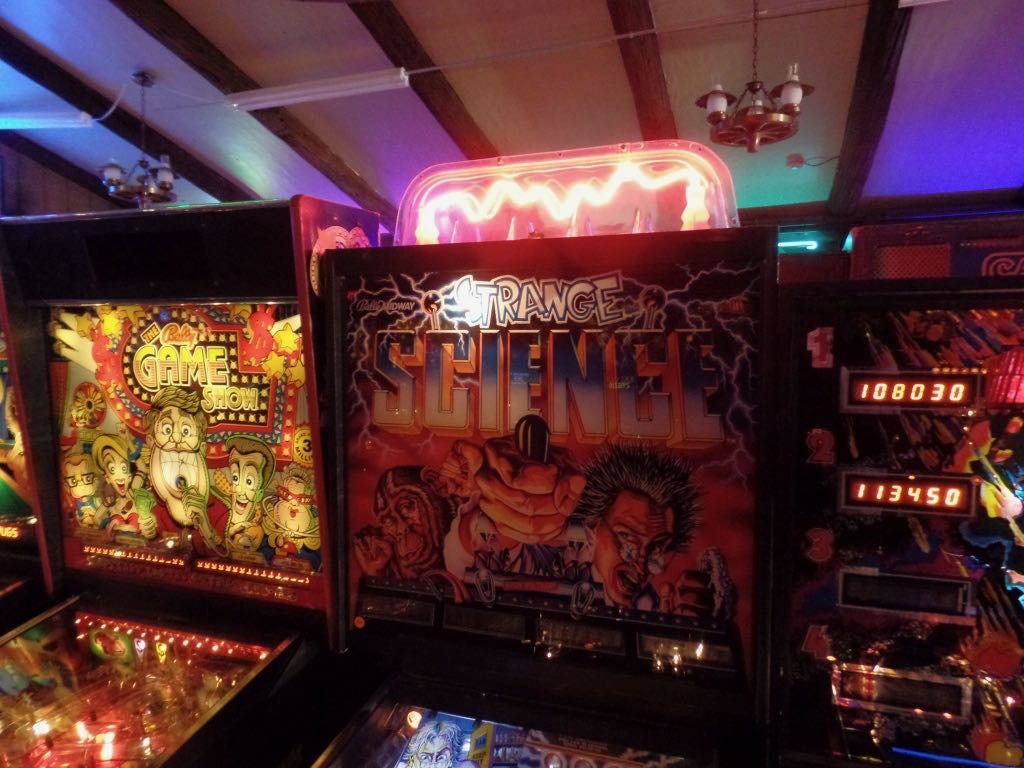 Mad science-themed late solid state game Strange Science, one of the first pinball games I ever really got into, complete with a fun little electric-discharge thingy atop the backbox. Also, Bally's Game Show, one of the surprisingly few game show themed pinball machines. 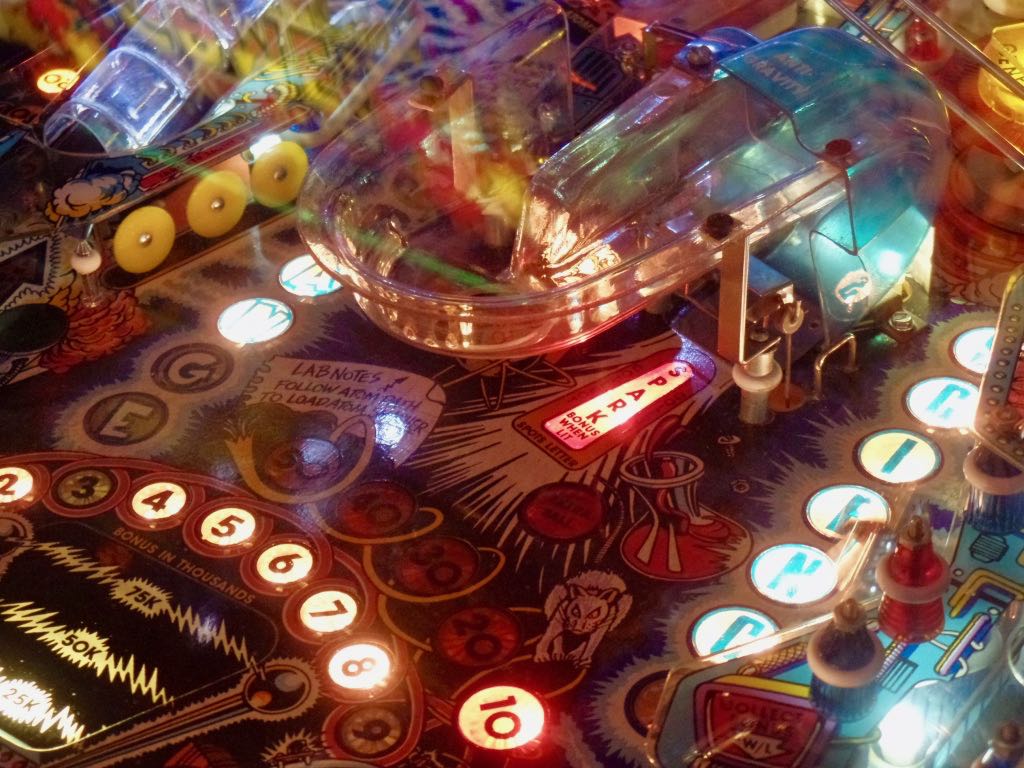 The most maddening shot in pinball apart from the others: so you're supposed to be able to shoot the pinball up this little blue vertical C scoop, all right. And then ... somehow ... shoot hard enough that it comes down the U turn and continues back up to some high-value targets? Really? Can that possibly be right? I've played this game every chance I can for thirty years and I still don't really know.