Through early summer 2018 the Grand Rapids Public Museum had a temporary exhibit: Dragons, Unicorns, and Mermaids. We finally got to see it. 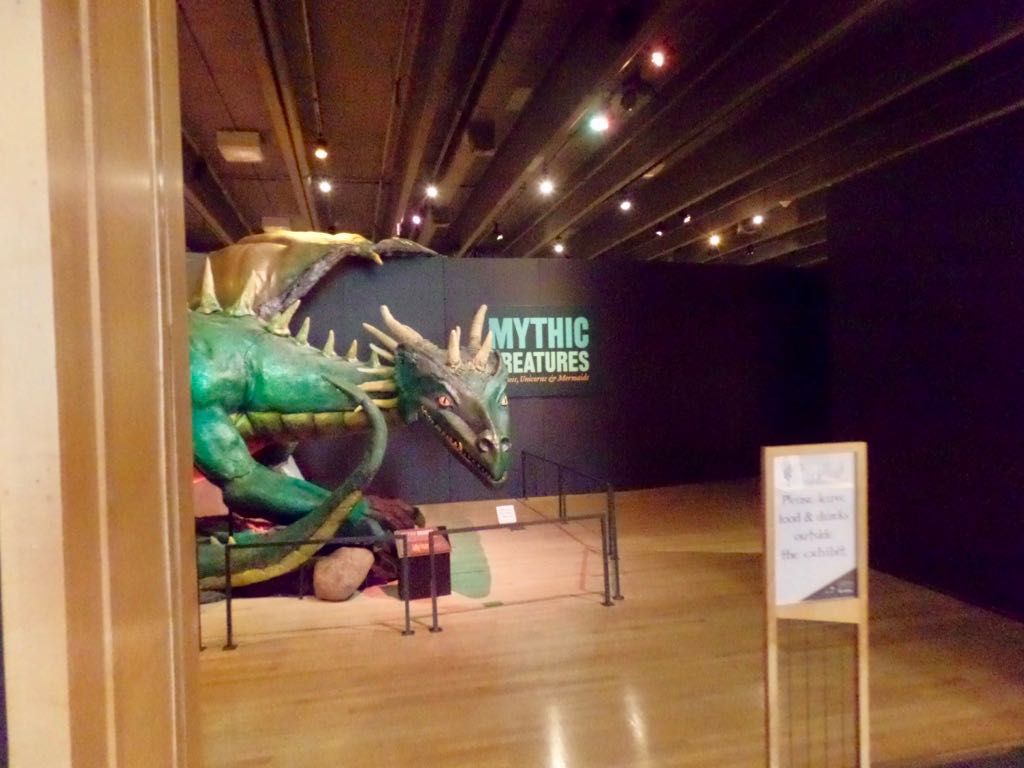 Right up front we've got a nice-looking dragon, wings reaching up maybe twelve feet off the floor. 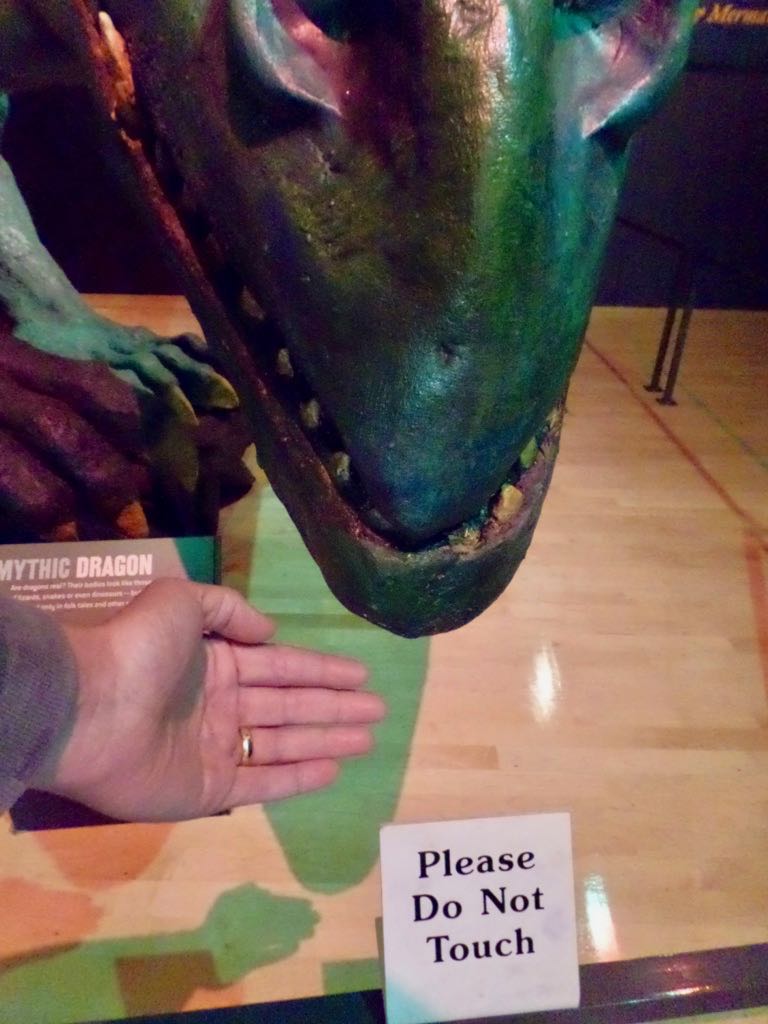 There was not much to keep us from touching if we really wanted to, just a polite request and the fear of having our hands bitten off by a cage-protective dragon.

Peering up through the translucent wings to the lights above the entrance. Notice that little patch of rainbow above the dragon's head; we'll come to that. 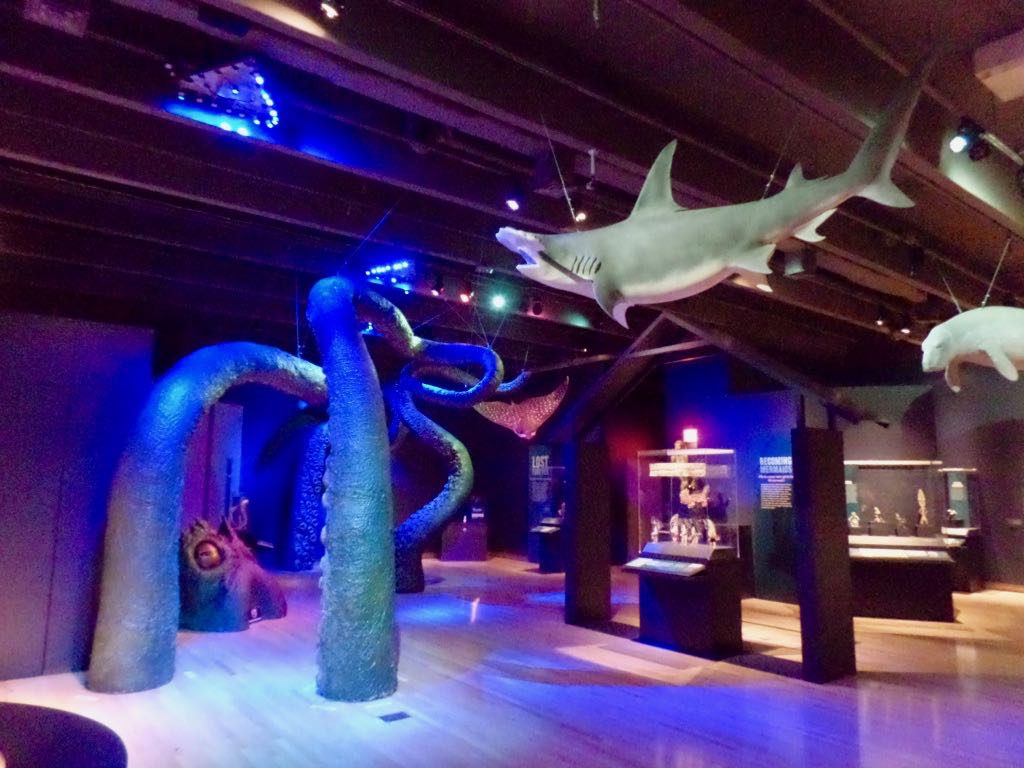 The Kraken! And also a shark and a manatee just hanging around. I remember there also being a TV showing an interview with someone from Coney Island, talking about the Mermaid Parade and related sea-creature activities. 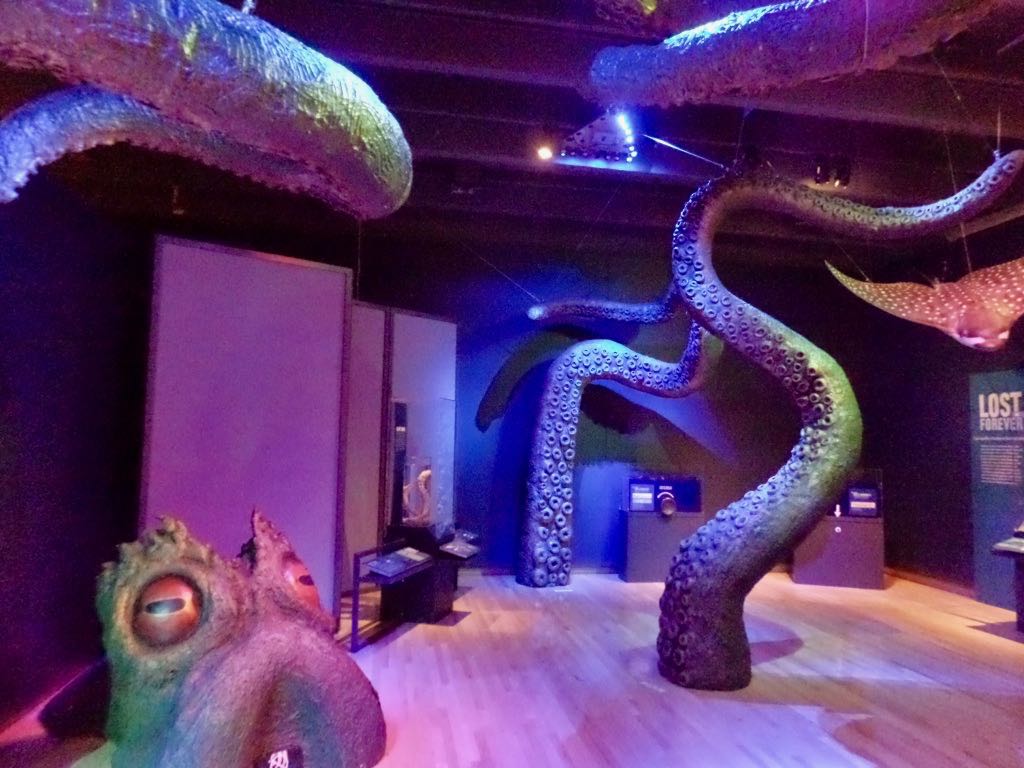 Another view of the kraken with more tentacle and giant eye activity. 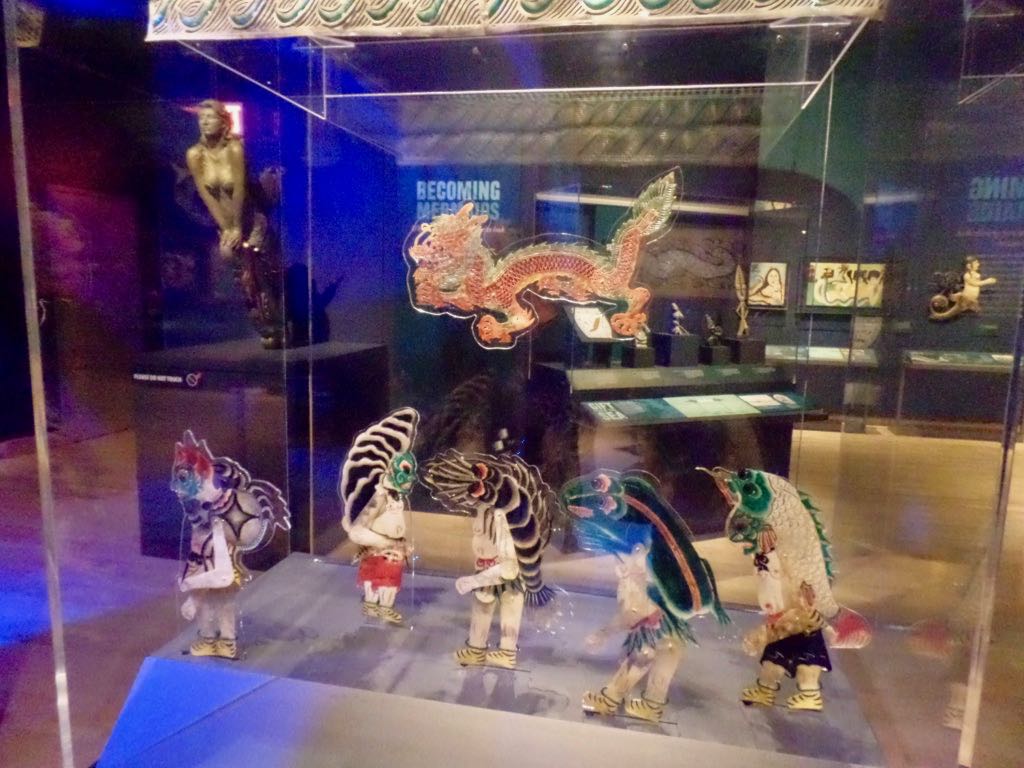 A lineup of water-monster figures that I failed to get a good picture of the display label for. Sorry. 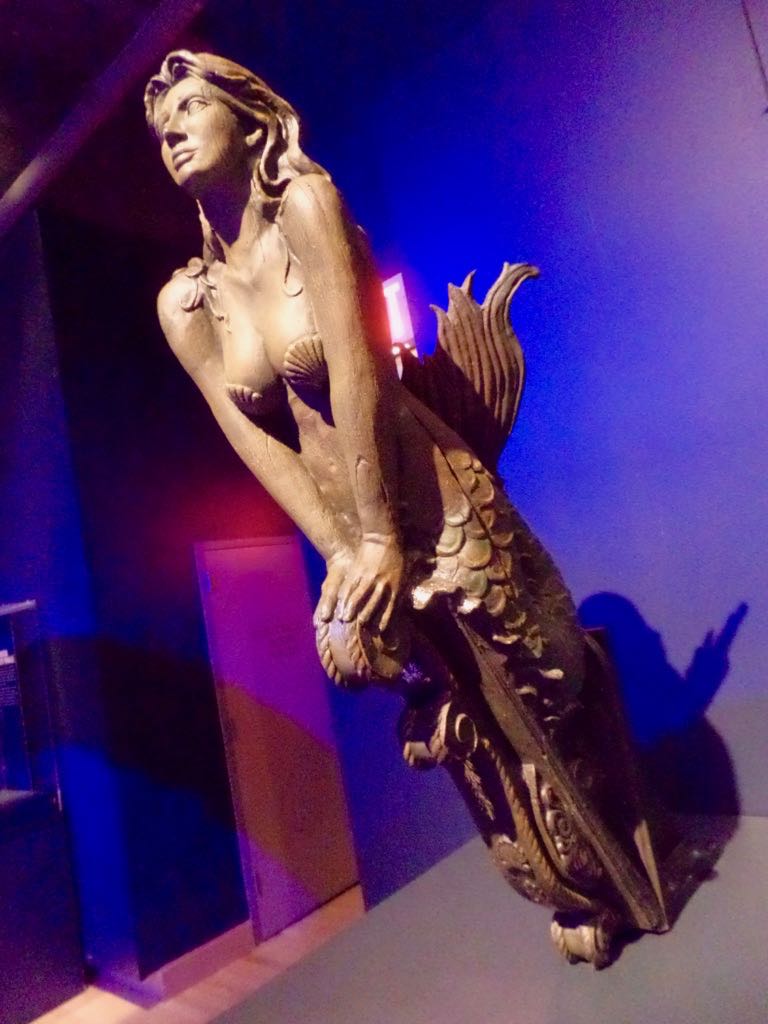 Now we're moving into mermaids, with this a reproduction, I believe it was, of a ship's figurehead. 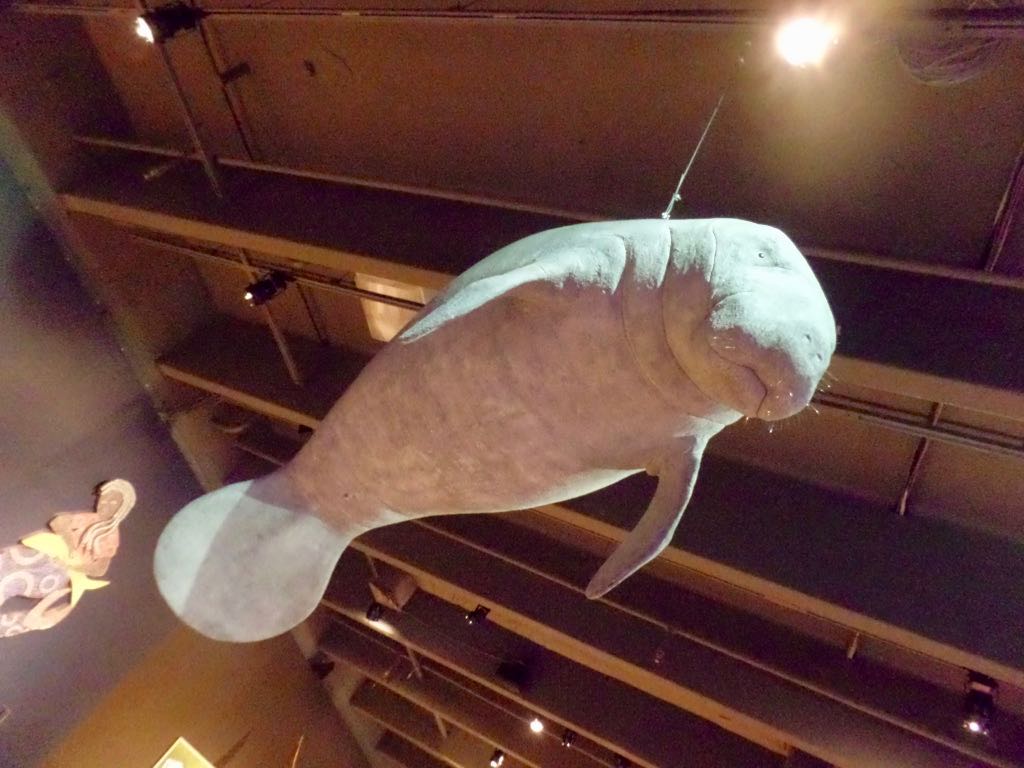 Here the museum tries to convince us of the existence of manatees. 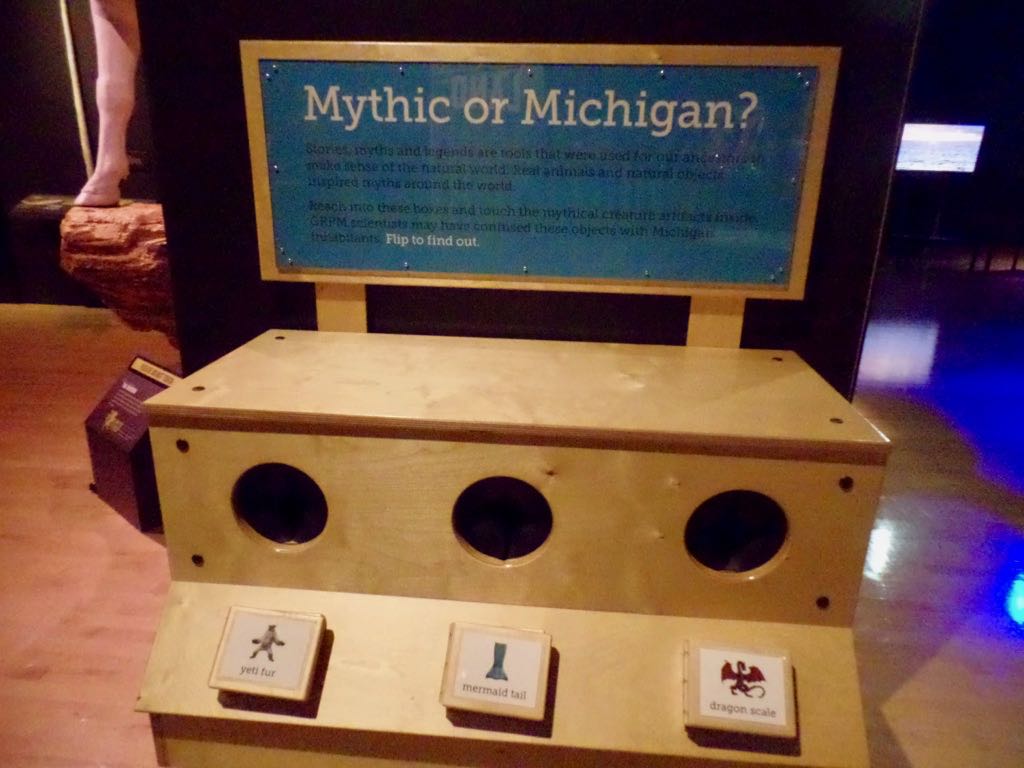 The exhibit tries to localize this mythic creatures thing by suggesting how various legendary animal stuff might be, like, beaver fur or something you'd see from Michigan. 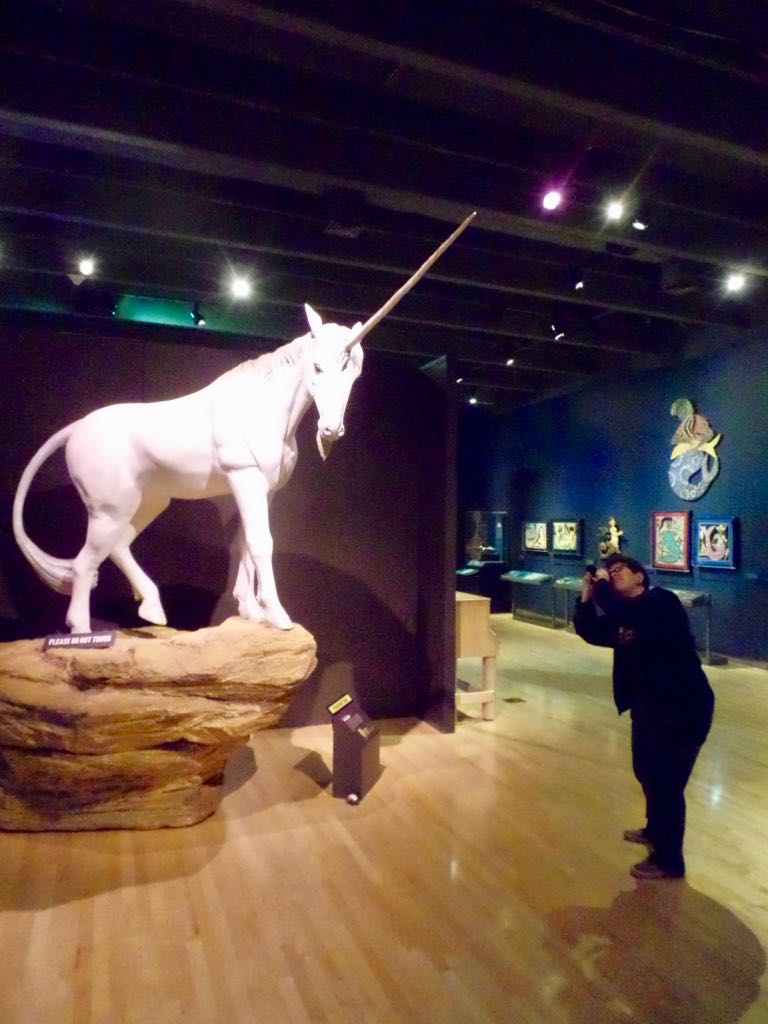 bunny_hugger getting some snaps of a unicorn while she's able. 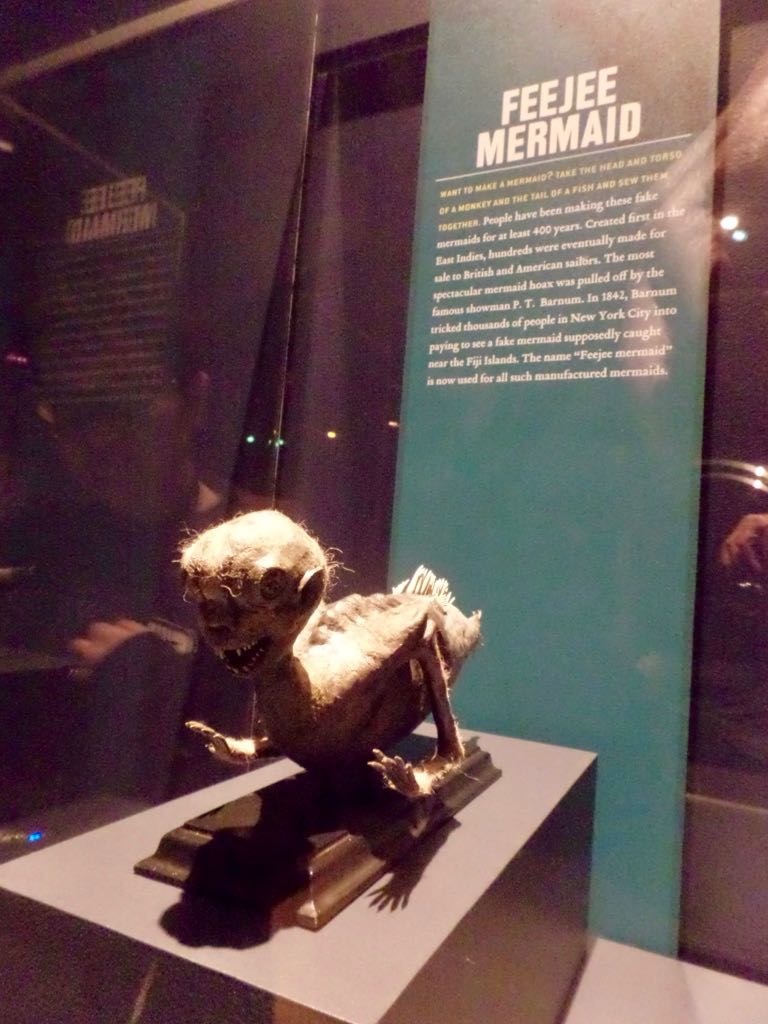 The somewhat gruesome figure of a Feejee Mermaid. The panel explains about how they'd be made from fitting together monkey and fish skeletons to sell as fake mermaids for centuries. And then talks about P T Barnums's famous Feejee Mermaid. 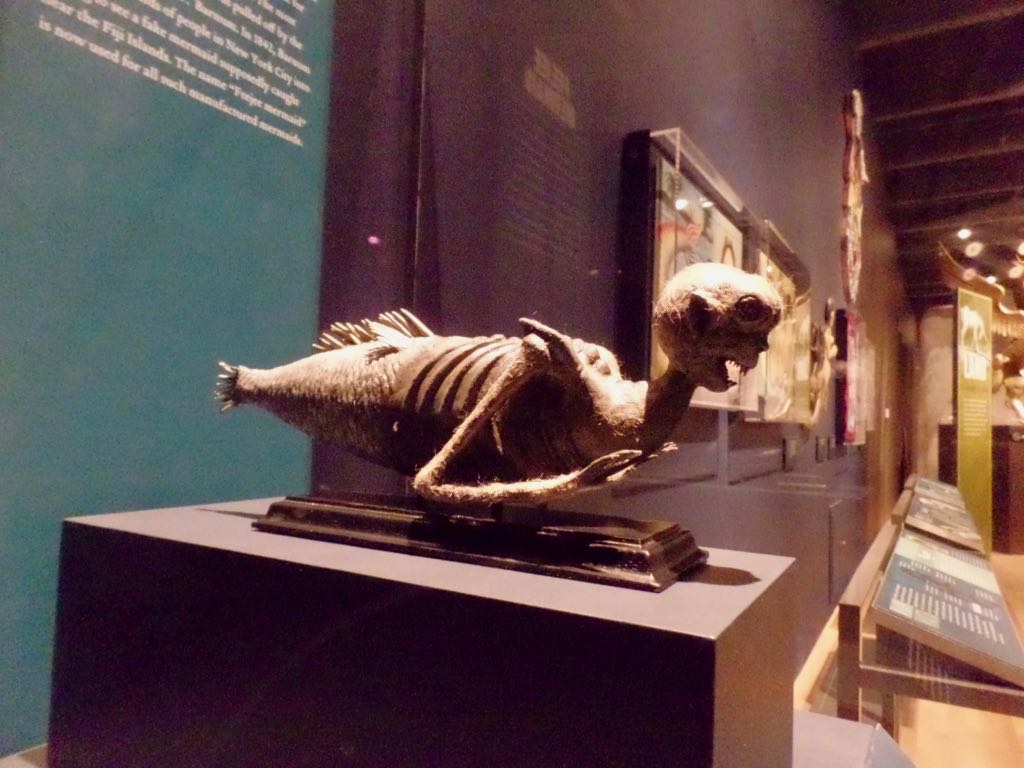 The text encourages one to think this is Barnum's Feejee Mermaid, although it falls short of actually saying that. I had thought at the time that Barnum's Feejee Mermaid had been lost to fire, and I found afterward that ... it's thought that it was. But Harvard's Peabody Museum has a donation that's purported to be the original Feejee Mermaid, except that there isn't the solid documentation to prove that. So, just, my sincere congratulations to Barnum for putting this wonderful bit of confusion and doubt into many museums for, now, a third century.

Trivia: Joseph Hawkins of Philadelphia got a patent for fountain-dispensed soda water in 1809. Source: A History of the World in 6 Glasses, Tom Standage.

Currently Reading: New York Sawed In Half: An Urban Historical, The True Story of What May or May Not Have Been the Greatest Hoax Ever Played on the Citizens of Gotham, Joel Rose.

PS: Exploiting my A-to-Z Archives: Measure, getting you a taste of what it's like being into real analysis.