When I look out my window, many sights to see

The last several years we've made our Halloweekends trip to Cedar Point the last weekend in October. It's fun seeing the season out. It's fun being as close to Halloween as possible. Some special years it's even after Halloween, and as close to

bunny_hugger's birthday as can get. In picking our weekend for this year, though, we went for the week before the end of October. Partly, this would give

bunny_hugger some more breathing space before a boss rush of pinball events and work committments. And this would open up time for Halloween parties or haunted house trips or such, that we've had to turn down the last several years. And the penultimate weekend in October should be about as good, right?

We set off bringing Sunshine to

bunny_hugger's parents almost on time. We wanted to set out at 11 am, and actually left at 11:15, which is still doing great. We spent longer talking and eating lunch than we had hoped, and set out from them about 2 pm. We left knowing it was unlikely that we'd get to the Hotel Breakers, on Cedar Point, early enough to take advantage of early admission. Ah, but, how would the crowds be?

Halloween events are amazing money factories for amusement parks. Cedar Point's Halloweekends just keeps getting busier. And this year has been busier yet. Some amusement park snobs blame their new Gold Pass. This is a season pass, introduced for the 2020 season --- Cedar Point's official sesquicentennial --- that's a great deal. It's got many of the benefits of the platinum pass, my and

bunny_hugger's level, but at half the price. It's only good for Cedar Point, which is the drawback for us. But it's so much better than the standard season pass that it's a great bargain if you don't want to go to other parks in the chain. It's been selling like it was the elixir of life. And once they put 2020 season passes on sale they were good for the remainder of the 2019 season, including Halloweekends.

So Cedar Point has been crowded. Again, amusement park snobs blame the Gold Pass for this. Surely it contributes. Also contributing, though, is that the weekends in Sandusky for September and October have been gorgeous weather. We've been to some truly brutal Halloweekends, days that were freezing or raining or both. What we'd want, for ourselves, is weather that's ... you know, bad enough to keep the place from being overcrowded. But not so bad as to shut down all the rides. Especially since they took pinball out of the indoor arcades.

Friday's weather looked to be ... not bad, for our purposes. Hovering around the 40s, light winds. Enough that you need to wear long underwear, not bad enough that you need the heavy jackets and winter gloves. The forecast for Saturday and Sunday, though? Highs near 60, clear skies, light winds. Well, the forecasts are always wrong one way or another, and maybe all the locals got their Cedar Point trips out of the way the previous six gorgeous weekends in a row.

The drive down was fine, except that

bunny_hugger fell asleep rather than grading. This was annoying in two aspects. One is that she's been getting her sleep habits under control and has been less prone to afternoon naps and this seems like regression. The other is that she did have roughly 1,432 essay questions that needed to be graded by ... 11 am tomorrow ... and three or four hours' work going down to Cedar Point would have made this week considerably better for her. Oh, and we hit a weird traffic near-stop in the transition from US 23 to the Ohio Turnpike. Worst is knowing that I had the chance to divert and all it would really have cost was seeing some of the sites of Maumee that we never stop at anyway other than the Speedway gas station where we use the bathroom.

At the Hotel Breakers check-in were a lot of people. Quite a line, really. It moved at a decent enough pace, but any hope of getting the last couple minutes of early admission vanished as we admired the skeleton carousel horses and the not-quite-muted playback of It's The Great Pumpkin, Charlie Brown. Our room would be just off the central rotunda, and I'm all but certain we have stayed in this precise room before. And with some layers to fend off the fair-but-not-bad cold we were ready to go in.

Trivia: Americans eat an average 26 pounds of bananas per person per year, more than any other whole fruit. Source: Grocery: The Buying and Selling of Food in America, Michael Ruhlman. (I am way below average and thinking of the poor soul who's choking down, like, 49 pounds this year to make up for me.) 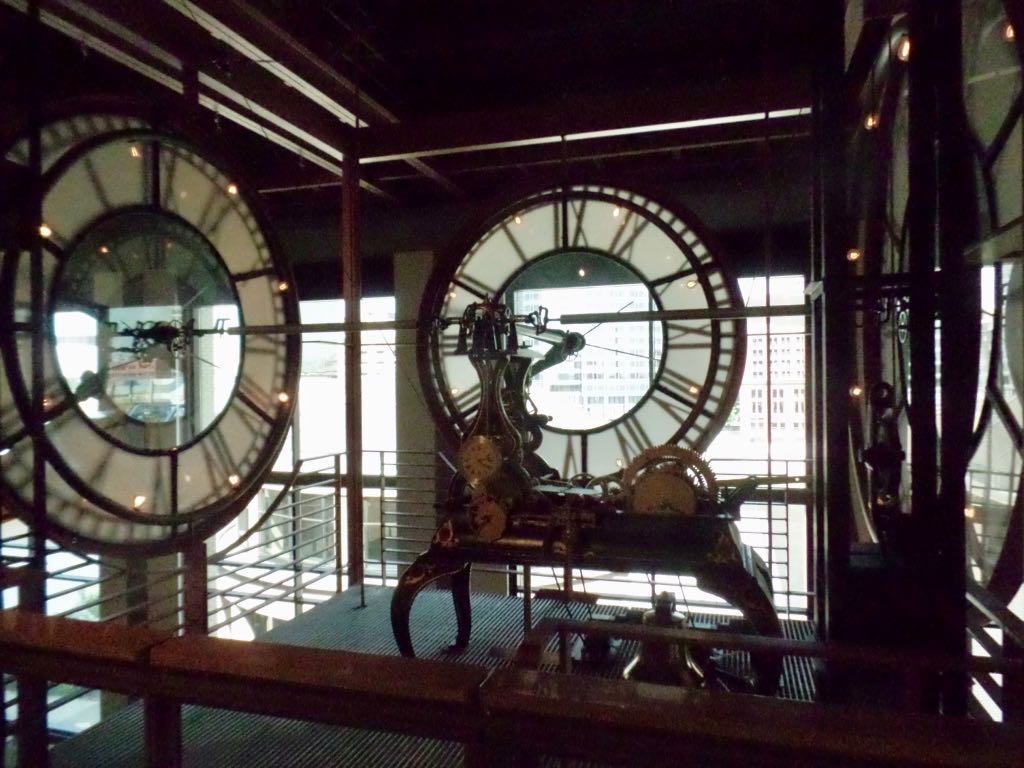 Grand Rapids, it won't surprise you to hear, built a City Hall in the Gilded Age, a great heaping pile of bricks and crenellations. Nor will you be surprised to know they tore it down in the 60s as part of urban renewal. So, here's the clock, saved from the tower and even restored to working, at least for twelve-hour intervals. 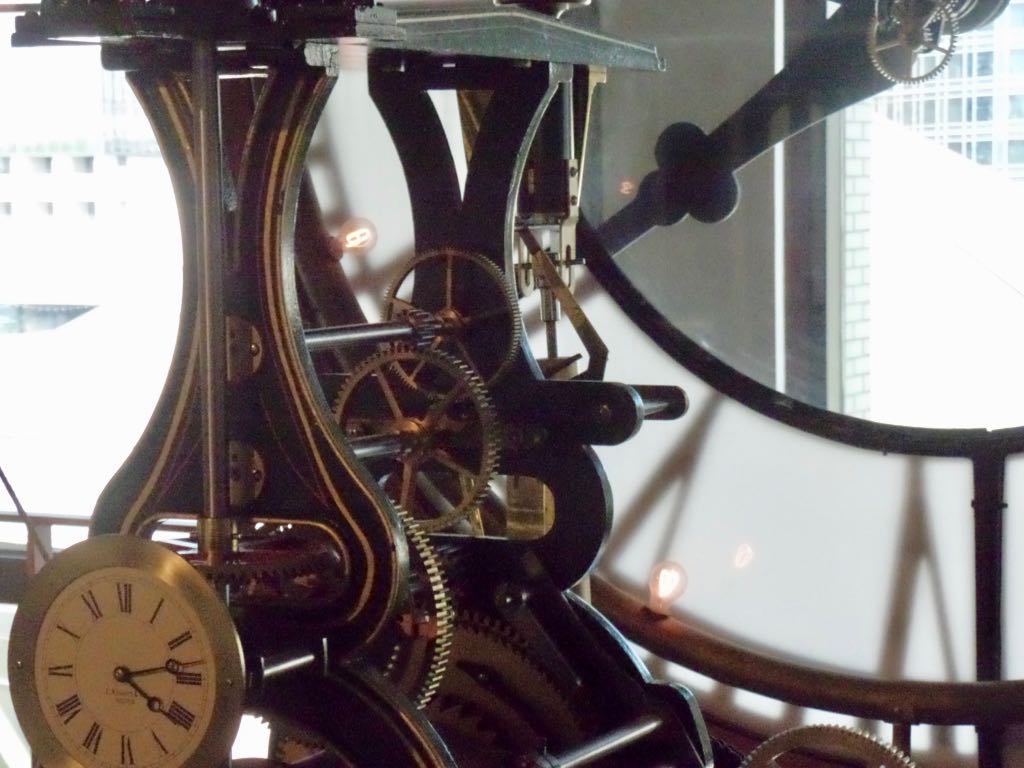 More of the gear and mechanisms of the former Grand Rapids City Hall clock. I assume the small clock face is there so people setting the thing know the city clock is showing the right time? 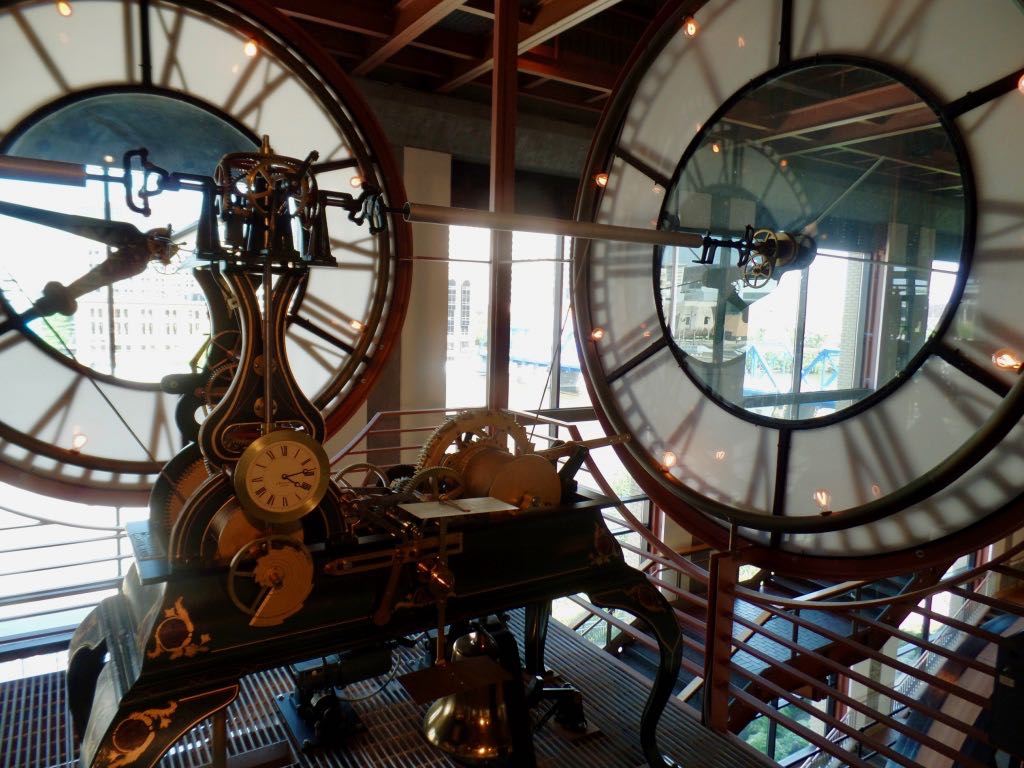 A view of two faces of the Grand Rapids City Hall clock, with most of the interesting mechanism.