And when I look in my window, so many different people to be

So we planned to get right into Cedar Point. We didn't, though. We had got there just at sunset, and the silhouettes of the amusement park against the reddening sky was too beautiful to just ignore. We had to watch it, and photograph it, and delayed going in for that, and this was the correct thing to do.

The park was fairly busy, harbinger of the weekend to come. We figured Steel Vengeance and Maverick, the big rides at the back of the park, were impossible except maybe as a last-ride-of-the-night. Gemini wasn't running, as usual for Halloweekends Fridays. The Mine Ride, celebrating its 50th year, was, and we started our riding on that, with a fair enough 15-minute wait. They were running three trains, more than usual, and they were full.

We walked the Frontier Trail towards the front of the park, and checked in on the glass-blowing workshop. Not long enough to see a show, but enough to see how much stuff they're carrying these days. Part of the Trail had been, for years, a steampunk-themed haunted walkthrough area. Nowadays it's changed to a more standard-issue haunted trail with fake gravestones and all. And something new: a plexiglass-lidded coffin that someone alive stood in, with several rats crawling over him. You understand what they're going for, but the rats were a pair of big fat dumbo rats, the kind that look like the heroes of a cartoon who stand up to the mean dogs, so the horror was mild. The rats kept trying to lick at the plexiglass and put their heads under the fingers of onlookers.

Cedar Point had the grease trucks back, so we could again get a Korean-barbecue style tofu meal at Cupzilla. These were all put into a little corner near Iron Dragon and where the Wildcat roller coaster used to be. In much of the rest of the area was the Boneyard Battleground. This was several stages, two of them for bands and dancers, one of them for acrobatics and stunts. Each stage was made up to look like stuff built out of a postapocalyptic junkyard. On each a band or set of acrobats would perform for something like twenty minutes. Then the emcee, the Queen of the Boneyard, would come out and declare the next performers competing for their lives or whatnot would be ... this. And this continued in cycle. The result is that the spectacle, with lights and music and flames spitting into the air, ran for five hours total, 7 pm to midnight, without interruption. This was great for making sure it always felt like something was going on. It also meant that this point got choked by the crowds, though.

And there were crowds. Blue Streak, the oldest roller coaster and the lone surviving wooden coaster, had a line of maybe twenty minutes. That was very worth it, though; the ride felt surprisingly smooth and lively. I joked they had greased the tracks. We would get back to the Kiddie Kingdom carousel --- mercifully the ride operator was not the one we'd had the unhappy encounter with the month before --- and that was nearly full, even though it was close to the end of the Kiddie Kingdom ride's day.

While we were near the front of the park we got on the Tiki Twirl, formerly Calypso and still playing calypso music. And went over to GateKeeper, which is both a great roller coaster and really good at moving people through. This had another wait of about a half-hour, although we got to enjoy watching the orange moon rising above the waters of Lake Erie from the queue. The only sad part to that is while the Moon was its most orange it was also behind a fence, so our cameras focused on the fence rather than the interesting stuff. By the time we were out of the queue the Moon was high enough that it was a beautiful view, but not the one we'd found so attractive.

bunny_hugger resuming her project of deliberately riding each horse --- and the Cedar Downs carousel. Both were nearer full than we'd ever seen them.

And this threatened to fill up our night. We chose for the end of the night to ride Raptor, the mid-90s heavy-looping roller coaster. Its estimated wait had fluttered all night between 30 minutes and an hour, and it was projecting closer to 30 minutes this time and, what the heck, it's better to do something. And this was how we did see out the night, with another great ride, one that again felt like they'd been greasing the tracks.

So this was our Friday evening. Not a heavy load of rides, no, but those we did get to were working great. Good start to things.

PS: Exploiting my A-to-Z Archives: Osculating Circle, one of those things that doesn't seem like it could be much, yet is.

PPS: Hey, how about a carousel? 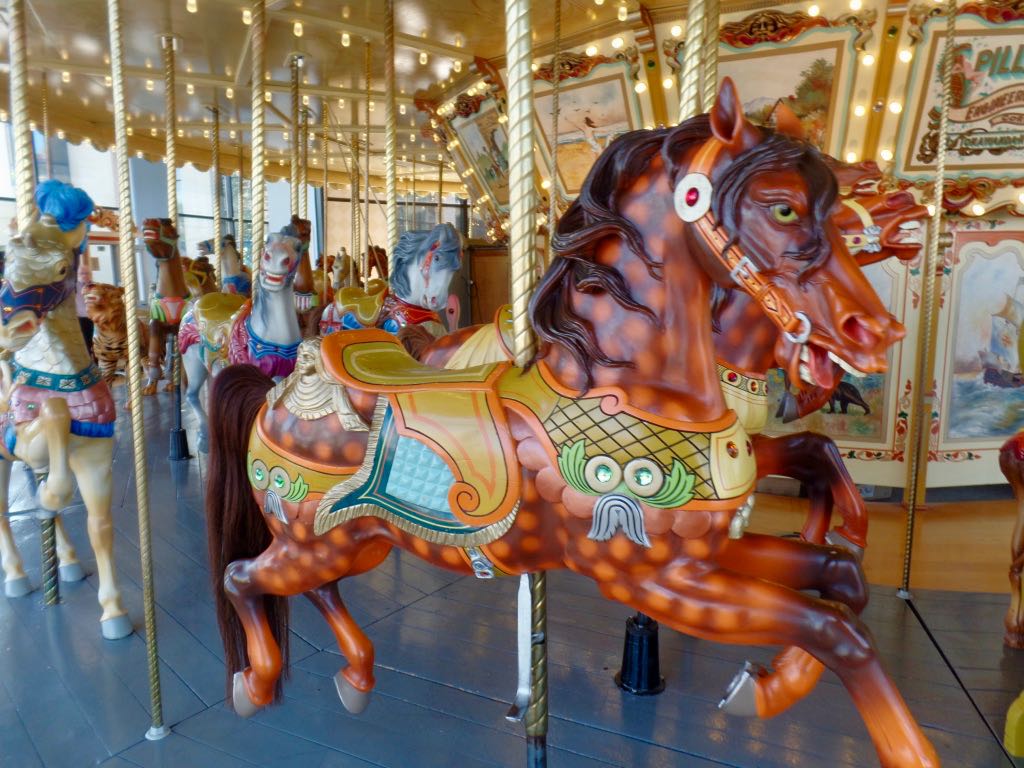 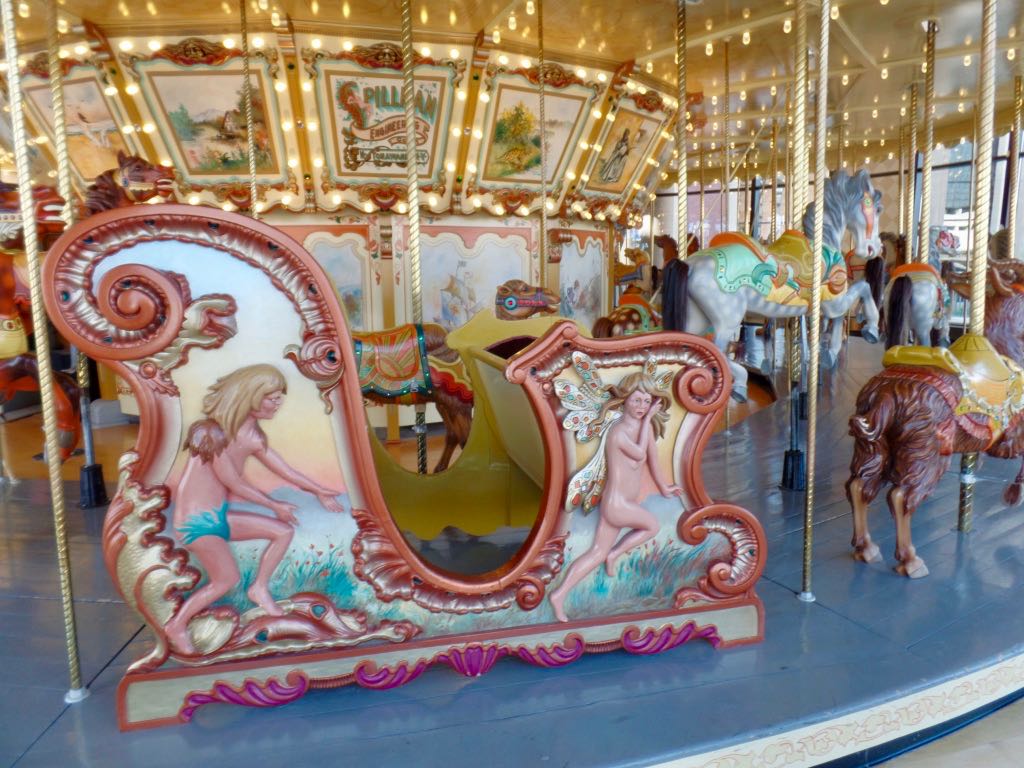 One of the chariots on the Grand Rapids Public Museum carousel, with quite the scene of fae folk and whatnot. 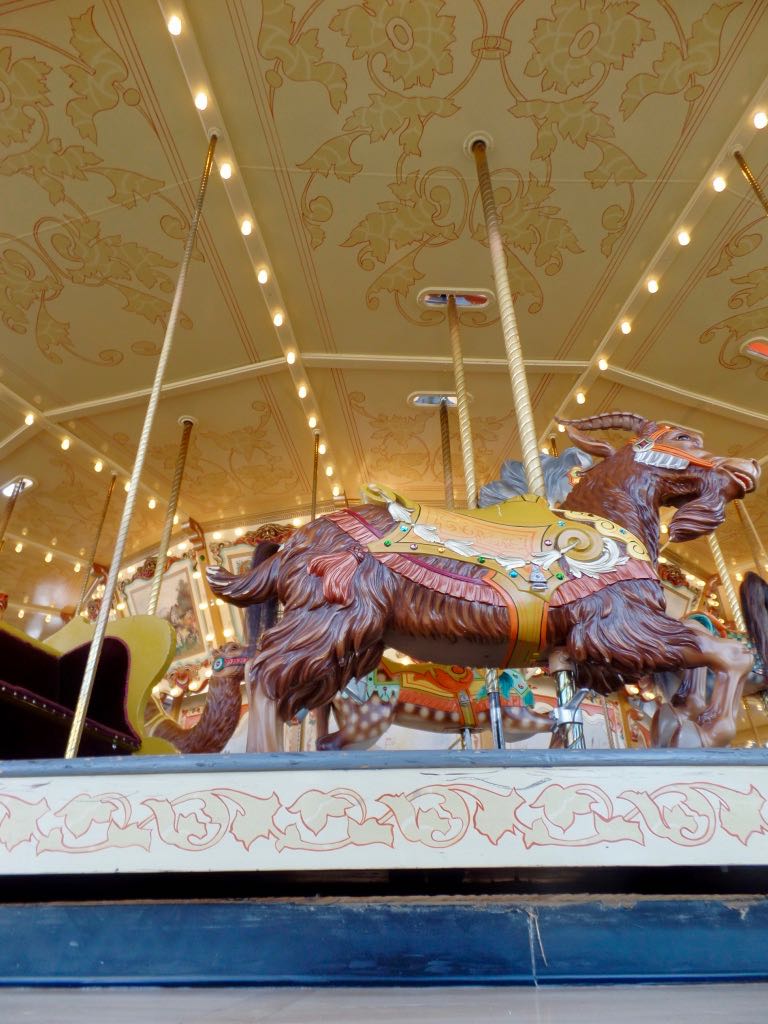 Looking up at one of the goats, and seeing some of the panels.