That it's strange, so strange

Saturday we figured to go to the Merry-Go-Round Museum first, and then into the park. We usually do this, unless it looks like the Sunday afternoon weather will keep too many rides from being rideable. The weather forecast for Sunday was great: upper-50s-to-low-60s and partly cloudy. The weather for Saturday was also great: mid-to-upper-50s and sunny. We, not figuring we needed the morning hours, slept in late enough housekeeping never came to our room. And we set out, aware that it might be a busy day at Cedar Point. But surely nothing like the Columbus Day weekend in 2011, when the park was so crowded they were parking cars all along the causeway leading into the park, right? ... The constant stream of cars going into the park, as we drove out, suggested otherwise. It was looking busy. Crazy, crazy busy. No, busier than that.

In hindsight, what we should have done was turn around and go back to the hotel room and re-planned. Either to spend the whole day in the park, or to get exams that

bunny_hugger could grade in the car. We did neither. We went to the Merry-Go-Round museum in the confidence that sure, it might take an hour to drive from this spot two miles away back here, but it wouldn't be riotously long.

The Merry-Go-Round Museum was more crowded than usual; I don't know that it was overflow Cedar Point visitors, though. They didn't have guided tours, a bit of a shame, as it's fun seeing

bunny_hugger quietly match her knowledge against the museum's staff. Also because they had new mounts on their antique carousel and we wanted to know more about them. I noticed that they'd taken off a fox, for example. But they had put on this great-looking little hound dog. Also, on the innermost ring, a tiny rabbit with a sign warning that only those 60 pounds and under may ride it. Gorgeous little rabbit, though. It's got ribbons with two names, Bob and Effie. The significance of this is unknown to us.

The museum had its raffle horse completed for the year, too, a nice blonde horse with maroon and purple and cyan saddle and gear. Between us we got a dozen and a half tickets for it. The ticket-taker up front mentioned how she remembered, one year, selling the winning raffle ticket. It was to a guy from Texas who declared there was no point selling any more because he was going to win that year's raffle. And, yeah, the winner that year was from Texas. I realize this doesn't quite prove it has to have been him, but, you know? It's a good story, let's go with that.

The band organ has a scroll of Halloween tunes, and we always wonder what song we'll get on the carousel rides, which happen around once an hour or so depending on the attendance size.

bunny_hugger was hoping for the Funeral March of a Marionette, or as normal people know it, the Alfred Hitchcock theme. What we got was a version of Dem Bones, at least for our first ride. For the second we got The Addams Family theme, which like a lot of these TV themes padded to three minutes goes off on some weird diversions mid-tune.

They had the carver we see every year there again. He was hard at work for something for next December: a Rudolph-the-Red-Nosed-Reindeer figure. It was in pieces, and just the bare wood, but it had that Rankin-Bass shape already. We don't know whether it's going to be on the carousel just for the holiday season or whether we'll see it during a future Halloweekends visit. Or if we do make the trip we always plan to, to see the ride some summer day when we're going to Cedar Point on the side.

The attendant at the gift shop --- once more they didn't have any new carousel music CDs, although we also don't have computers that play CDs anymore --- warned us that it was really busy getting back to Cedar Point. She showed the traffic maps of Sandusky, and all the dark red and even black lines. Ominous stuff.

bunny_hugger had a great idea. In Port Clinton, maybe ten miles west of Sandusky, is Cheese Haven, a shop which ... well, it's right there in the name. We almost never get there, though, since we're usually leaving Cedar Point way after the close of business. Now? As long as they didn't close before 5 pm on a Saturday? We could get there. Maybe even get some good novel cheeses.

So we set out west and got there and had a mystery solved. I had thought that Coon's Candy, in Nevada, Ohio, used to have these mysterious old framed newspapers about the deaths of William McKinley and Warren G Harding, and that were gone the last couple visits. Nope; it was Cheese Haven, and they still had them, flanking the doors, for whatever reason. They had a nice array of cheeses, including plenty of samples of both hard cheeses and spreads. Also, like, Boyer candies I ordinarily see only in Altoona or in very dusty form. We cursed ourselves for leaving the canvas cooler bag at

bunny_hugger's parents, but after all, we didn't think we'd be getting anything that needed refrigeration. I bought a slender plastic cooler bag, and hoped it'd hold up to keeping cheeses safe against the effect Sunday afternoon might have in the back of my black car. It did, and now that's joined the heap of stuff I keep in my car Just In Case, along with jumper cables and a light rain jacket.

Between driving out to Cheese Haven, and wandering around, and buying stuff, and driving back we spent maybe an hour and a half away from the red- and black-traffic lines of Sandusky. This would be all that we needed, right? It might be a bit heavy driving back to our hotel, but it'd be no real issue, surely.

Trivia: The USS Kearsarge, which recovered Wally Schirra after his Mercury flight on the 3rd of October, 1962, had left the port of San Diego the 1st of August. Source: Sigma 7: The Six Mercury Orbits of Walter M Schirra, Jr, Colin Burgess.

Exploiting my A-to-Z Archives: Pigeonhole Principle, another of those things that seem so obvious it can hardly be mathematics, but it's really good mathematics despite that all.

PPS: Word on the street is that life is a carousel, my friends. 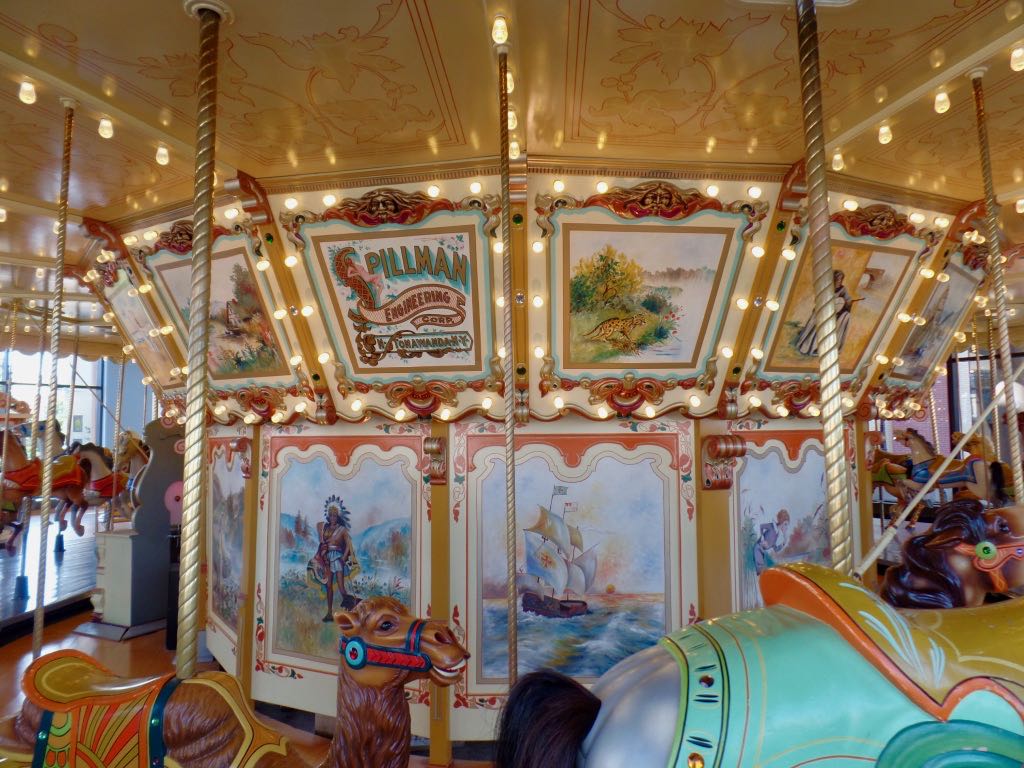 Looking at the scenery panels in the middle of the Spillman carousel at the Grand Rapids Public Museum. I don't know how original any of the designs are, but they do look plausibly 1928. 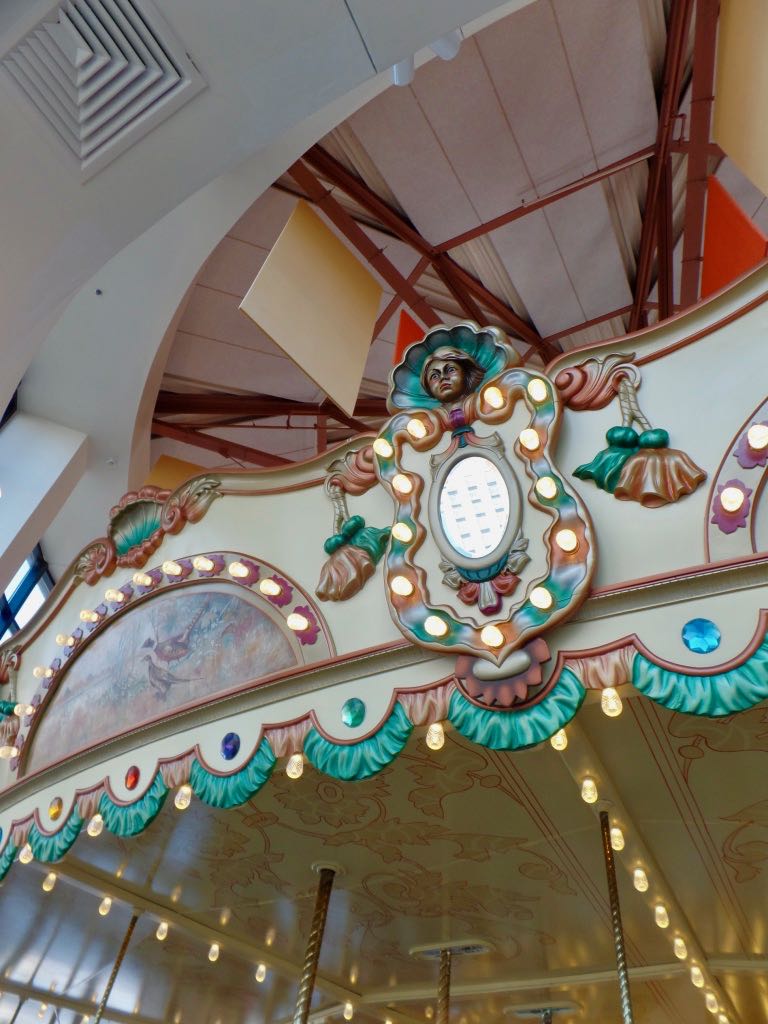 Looking up at some of the rounding board of the carousel, plus the ceiling of the enclosure, which is this cute little side building to the Grand Rapids Public Museum. 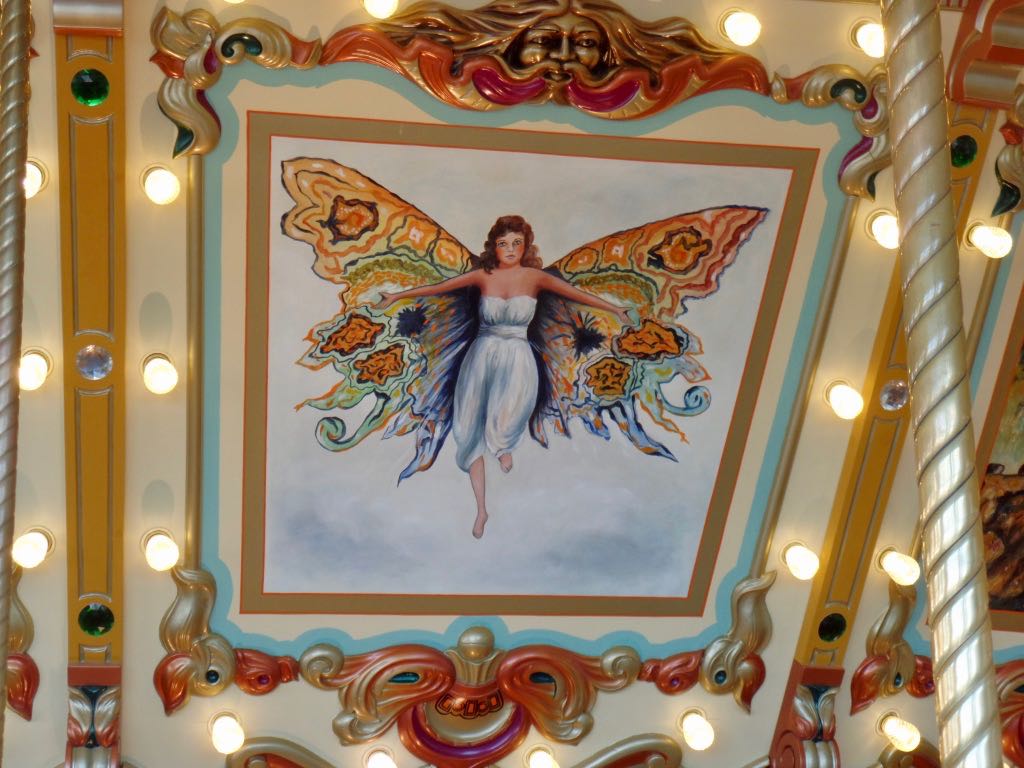 Butterfly-woman that's one of the designs you see on these carousels all the time. One of the Cedar Point carousels has this but as three-dimensional carved figures around its top.