You got to pick up every stitch

Driving back to Sandusky from Cheese Haven went nice and smooth and well right up until it didn't. This started with traffic backed up a couple of city blocks not far from the Merry-Go-Round Museum. Then we got to an intersection where cop cars blocked the road and they pointed us off to the right, to more major roads. The roads that the city wants people to take to Cedar Point. So, with episodes of the Greatest Generation podcast playing, and

bunny_hugger intermittently micro-napping, we took our little tour of other Sandusky streets and tried to think if there were anything else we had meant to get to in the town. A movie or something.

There were some nice points. Driving past a costume shop way off in the middle of an over-large strip mall, that I was tempted to go off and visit but didn't. Or the great mysterious Pyramid building! It was this tiny building, most recently a pet salon, underneath a wood-slat pyramid tower and we had seen it years ago for sale, and staying there. We sometimes talked about getting it to be our Cedar Point Visit home, although as a building this small --- apparently only ten feet wide and like 25 feet deep and probably not zoned residential --- this would've been dumb and possibly illegal.

And now it's impossible! The building was gone. Not the pyramid, which was there, and which provoked debate between me and

bunny_hugger about whether it was the Pyramid Building, without the building. The great roof was there, but the place was a park. I thought that couldn't be it, it had to somehow be a different pyramid? Because Sandusky would have two pyramid buildings near one another for the reasons?

bunny_hugger was sure that had to be the place we'd seen in past visits but hadn't been able to find recently.

She was right, of course. The Pyramid Building, vacant for years after the pet-groomers went out of business, had been seized for taxes or whatnot. And the building itself, constructed only in 1979, the same year Skylab fell, was demolished. The great pyramid --- actually a detached structure all this time --- was saved, though, and used to strengthen the neighborhood park's identity. So it's sad that we lost our absurd fantasy of having a summer home in northwest Ohio, but at least the most important part of this local strangeness survived and can be expected to stay around.

Also staying around a while: us, in traffic. Traffic advanced very slowly if it all, often by cars giving up and turning the other way. We finally got up to some cops who told us, Cedar Point's closed. And all I could do is stammer, ``But ... it's our hotel. We're staying there.'' And I held up the parking-pass that we got from the Hotel Breakers, as evidence that I wasn't totally fibbing. The cops said all right, then, and let us continue.

This would repeat as we drew closer to the arteries leading to Cedar Point. Traffic even got less bad as we got closer. The final leg, leading directly to the Causeway, was even clear of traffic, the result of cops turning away everyone who didn't think to say they were staying at the Hotel Breakers.

I wondered how bad parking would be, but also saw that there were no cars parked on the grass along the Causeway that connects the mainland to Cedar Point's parking lots. This had been full up the Saturday of Columbus Day weekend 2011, when the park was the busiest we had ever seen --- until then --- and, like, the local cell phone system crashed under people tweeting about how impossibly busy it was. And I was also disappointed to see the Marina Entrance and the Hotel Entrance --- the two (of four) entrances to the park we pass most closely on the way into the hotel parking lot --- were both open. If the park were closed we wanted to see the strangeness of the place being shut in the middle of a gorgeous Saturday afternoon.

I figured it would be hard to find a spot in the hotel parking lot. It was harder than that. I drove aisle after aisle as

bunny_hugger tried not to let me notice how anxious she was getting about parking. (Really she was very unhappy about all the traffic, but doing her best to not express her unhappiness, lest it aggravate me while I was driving.) We finally found one, in the last row, the farthest lot, past even the shuttles that Cedar Point uses to get people to off-the-Point hotel rooms. Between two Largemobiles that were parked a little too close to our lines. We were able to fit in only because I drive a subcompact and was willing to risk it, and even then, didn't pull in the whole way, giving my doors that little extra bit of space.

When it was too late I realized: Cedar Point has a traffic radio. We never listen to it, because when would it have anything useful to say? But if it had anything worth listening to, it would be through this. Nominally the traffic radio ends at like 1 or 2 pm, another reason we never hear it; we usually get to Cedar Point around 3 pm at the earliest. But if it were going to have a long broadcast day, this would be it, too. But we didn't think of it, and we didn't remember what frequency it was anyway, and, oh, too bad. I don't know what the traffic radio would have been here, but I like to imagine it was just a stream of expletives being bleeped out. Well, maybe next October.

bunny_hugger checked Facebook, I checked Twitter --- the park was getting roasted. A lot of people complaining about making the many-hour trip only to be turned away two miles from the park, and replies assuring their tickets were good for Sunday if they came back. Or to contact this number if you can't do Sunday. It was fun to watch from our safe remove. The park had apparently reopened about an hour before, when one of the cops was telling us the park was closed. We can forgive him not having up-to-the-second updates and telling people to head away anyway. Later, Cedar Point watchers would assert this was the first time the park had closed for reasons of reaching capacity in its history. That's so thrilling a prospect that I instinctively doubt it. Never mind the days in, like, 1906 where the park had four rides and three of them were just metal benches in the sea. All claims about amusement parks are guarded by puffery. And once they've been heard, they evaporate, leaving only faint memories about whether this same thing happened three years ago, or thirteen years ago, or every year in the 70s. I like the thought of being at Cedar Point on the Busiest Day The Fire Marshalls Would Allow It To Have. But I'm going to do my best not to believe it, or let you believe it, without citations.

Trivia: Benjamin Silliman, appointed as professor of natural science to Yale in 1804, had an allowance of $9,000 for books and laboratory apparatus. Source: Yankee Science in the Making: Science and Engineering in New England from Colonial Times to the Civil War, Dirk J Struik. 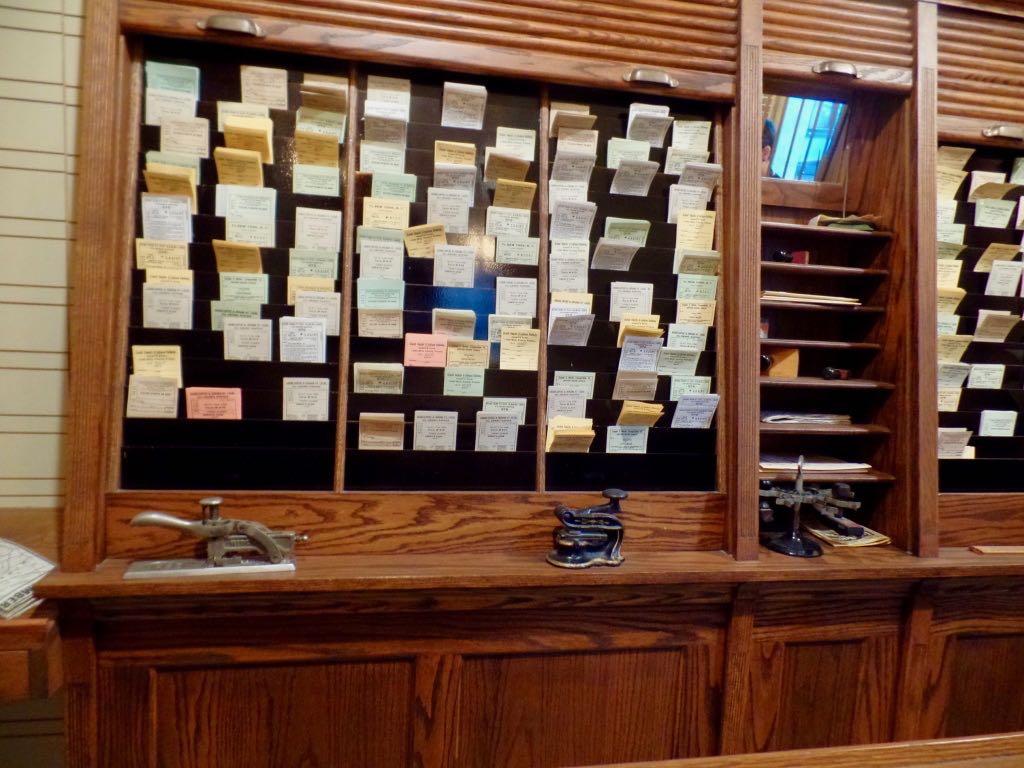 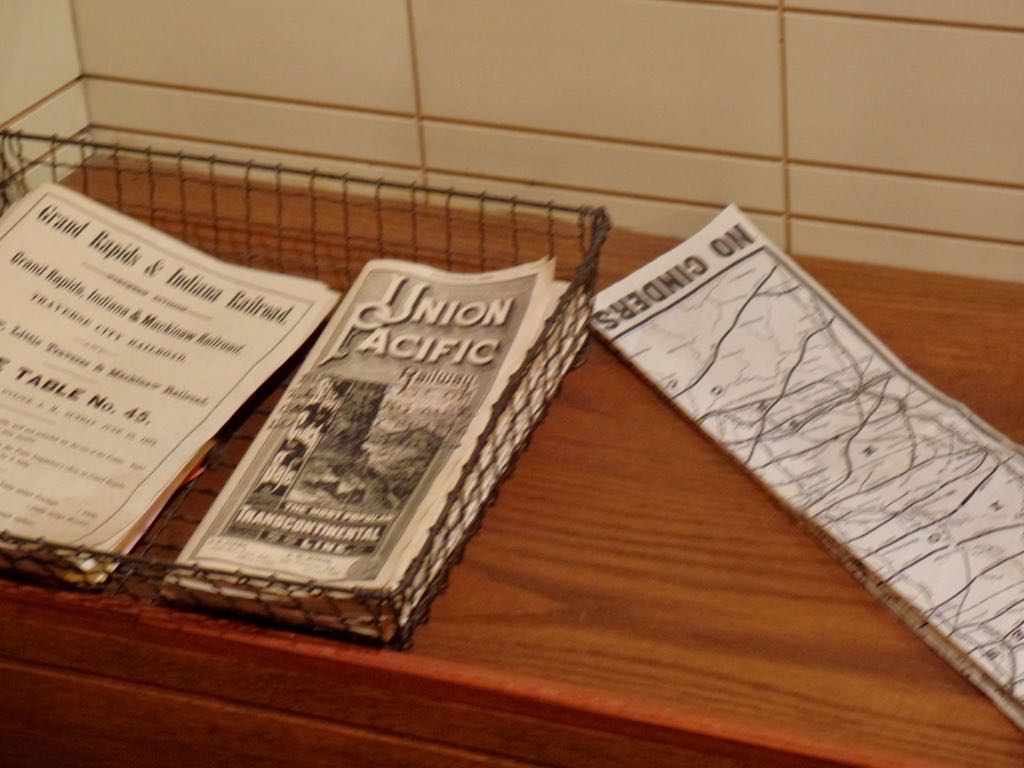 Close-up view of flyers for the Union Pacific and for the Grand Rapids and Indiana Railroad, which operated from 1854 to 1918, from Cincinnati to the Mackinac Straits. It first operated trains into Grand Rapids in 1867. It changed the name from 'Railroad' to 'Railway' in 1896, letting you date the flyer a little more precisely.) 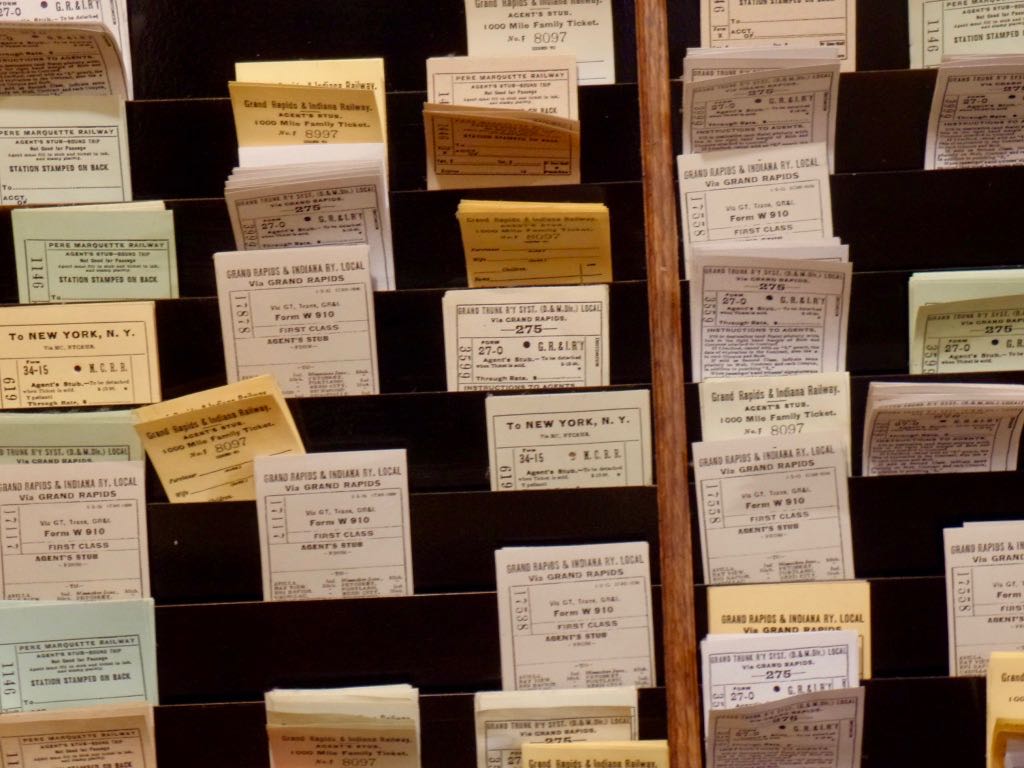 Closer picture of railroad tickets at the museum railroad station.