Must be the season of the witch, yeah

The jam-packed nature of Saturday at Cedar Point had implications. For future years yes. Also for Sunday. The park advised people turned away Saturday to come back Sunday. Those near enough might do so. And the weather was still going to be good. In fact, it was even better, getting up to the mid-60s and so nice that we went in without our jackets. We would have two chances to ride any of the marquee rides. One would be the end of the day, when if you're in line at the park close they let you stay there. The other would be early admission. As Hotel Breakers guests, and as Platinum passholders, we're allowed in one hour early. Traditionally, we don't use that on Sundays because we'd rather have the hour sleep. But the only way we could plausibly ride Steel Vengeance and anything else at all would be to go in when the park opened for early-admission at 10 am.

So we had to get up early, and shower quickly (always hard for me), and pack and load the car and check out. We did our best, but didn't quite get to the Hotel Entrance to the park for 10 am. We were close, though, getting in about a quarter past the hour, and we charged for Steel Vengeance. The queue was already posted at something like 90 minutes, but we figured there was no chance we'd see that line shorter.

And this gave us the time to look at some of the theming. There's a lot of queue for the ride. Cedar Point took the conversion of Mean Streak into Steel Vengeance to make a whole cast of characters for its Frontier Town, filling out names and backstories for like a dozen figures. Along the way in the Steel Vengeance queue are biography signs. One of them explains why there's a weird number of emu jokes in the Frontier Town, which is after all themed to the American West. ``Bendigo'' Chester Watkins is explained to be an Australian immigrant who came to the West with his family and a crate of emu chicks that he figured he could raise in Western Town just as well as in Australia. Which is daft, but in a way that's plausible for 19th Century Western Towns. It still doesn't explain why Cedar Point got emu-happy, but, what the heck. Anyway it's a fair bit of work to give a couple roller coasters a backstory of betrayal and revenge or something.

Steel Vengeance remains, we must admit, a fantastic ride. It's still possible to make out a lot of the old Mean Streak ride in it, but it has got extra bits of speed and barrel rolls, on the track, that a wooden coaster could not hope to do. And the ride was great, as we'd hoped. Worth the wait, which was closer to an hour than to 90 minutes. By the time we got out, the wait time was already up to three hours; we were wise to take this for our early-admission ride.

According to an events schedule we'd picked up there was a show of creepy, crawly animals at 12:30. This would be run by the Cleveland Zoo. We had just the time we needed to walk from Steel Vengeance, at the back of the park, to the Oceana Midway near the front and where the show was held. It wasn't in an enclosed venue; it was just out in the open, in the sunny skies near GateKeeper.

The show had some creatures that were legitimately, you know, Halloween-style spooky, or at least creepy-crawly. This would particularly be the Madagascar hissing cockroach, since an insect absolutely fits the bill. The ball python, too, a good solid match. The Eurasian eagle owl is also a good one, since, owls, you know? They also had a bearded vulture, which like the owl doesn't creep or crawl, but is Halloween-y. Others, though? The hosts could try to insist that the sulfur-crested cockatoo is mostly white, like a ghost, but they sound like Count Floyd trying to talk up the 3-D House Of Pancakes. Barely spooky at all was the three-banded armadillo, although that at least looks exotic and alien to northern Ohio. The fennec fox, though? No. That's so not Halloween, not by any measure. You can't present a living ball of fluff with drowsy eyes as creepy or crawly or Halloween-y. Just no.

By now, we were really ready for lunch. So we walked halfway back across Cedar Point to get to Cupzilla again, and then back again to the main midway, where we could get a Freestyle Coke. I go into such detail on this because if there is one thing we did on Sunday, it was walk back and forth a lot. We did a lot, yes, more than you might expect we could do for how crowded the park was and how the day would run only from the general opening at 11 am to 8 pm. And, Steel Vengeance beside, we didn't wait for anything that long. But we managed that by being willing to roam around and get on things as their lines seemed reasonable. And that transferred the hard work of the day to our feet. We had extremely sore feet by the end of the day ---

bunny_hugger worse than me, but remember, I've never had a good-fitting pair of shoes --- and the next day, and we're still recovering thanks, in part, to what we went and did the next weekend. You'll hear about that soon enough, too.

Trivia: By the National Agreement of 1883, baseball contracts ran from 1 April to 31 October, with no team allowed to renegotiate a contract before 10 October. Source: Labor and Capital In 19th Century Baseball, Robert P Gelzheiser.

PS: By the way, Thimble Theatre is trying to explain the fourth dimension, just a heads-up to keep my posting streak alive mostly.

PPS: the end of the day at the Grand Rapids Public Museum. 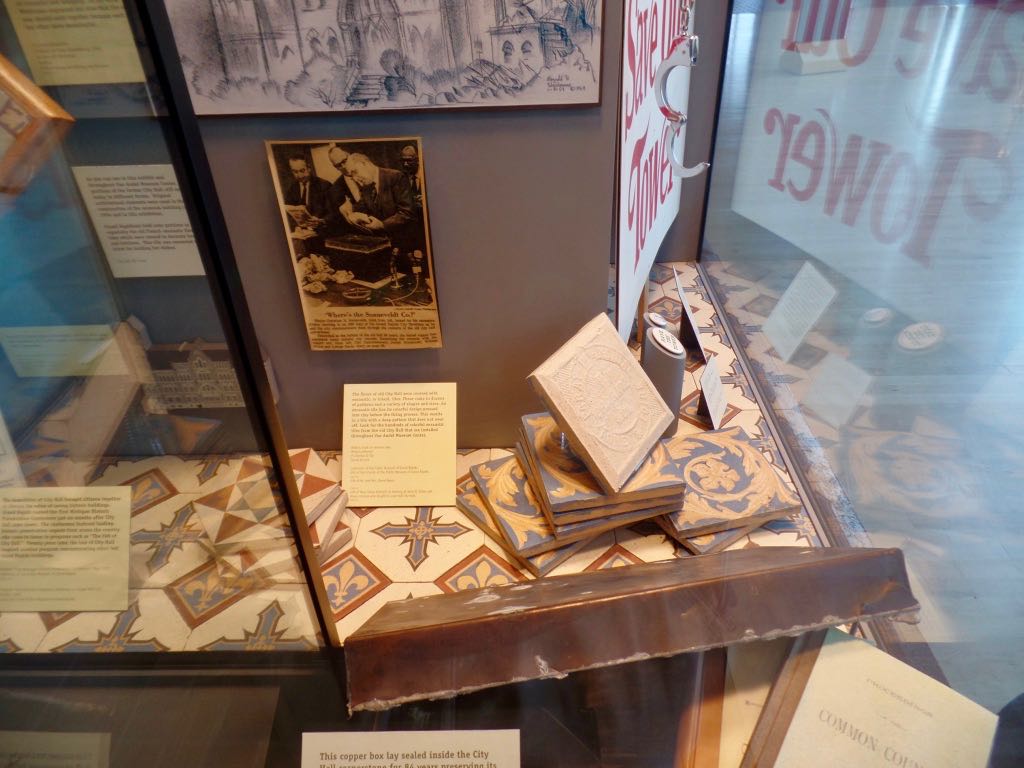 Pictures from the drive to save the old City Hall, and pieces from the floor and all that. 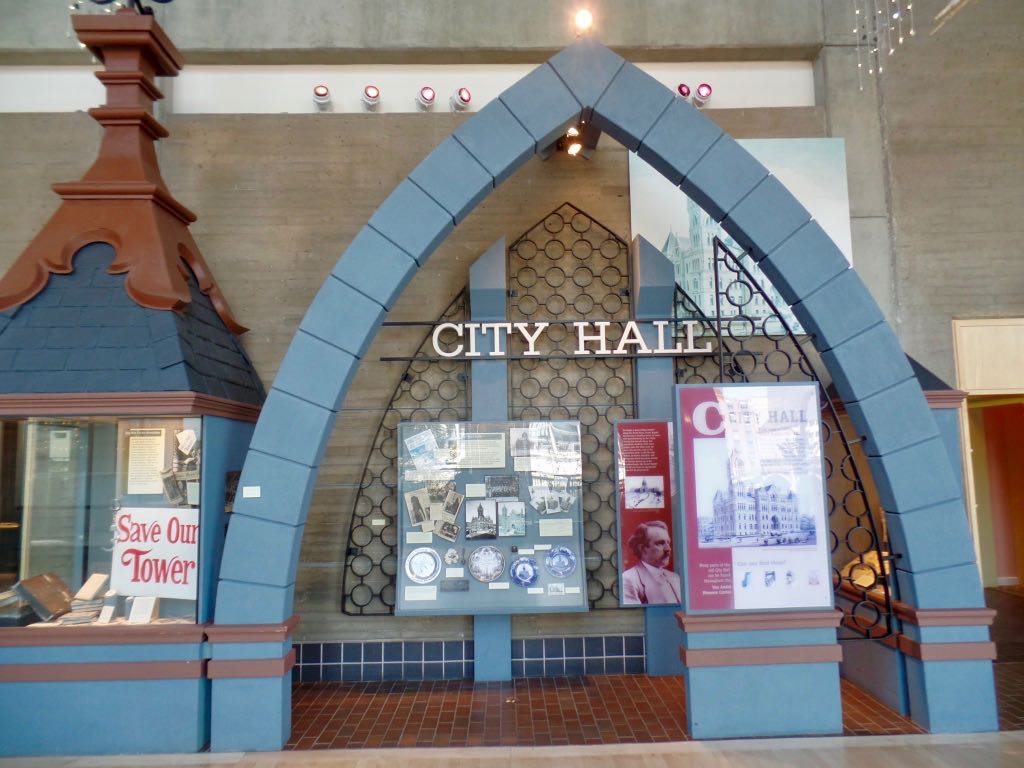 The exhibit of the attempt to save the old City Hall or at least salvage what they could of it. 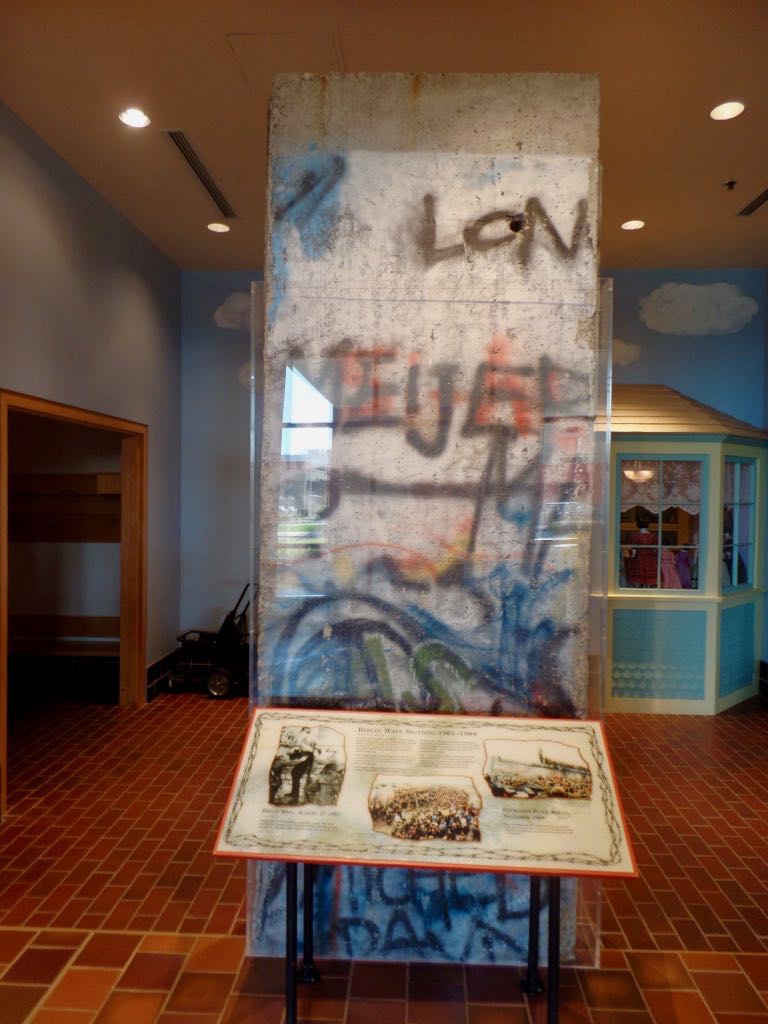 The Grand Rapids Public Museum has a chunk of the Berlin Wall, too. I'm sure it's coincidence that they got a piece with the name Meijer graffiti'd on it. (The Meijer supermarket/discount-department-store chain started in the Grand Rapids area and is still headquartered there.)