When I look over my shoulder what do you think I see?

bunny_hugger), but the queue sign claimed the wait wasn't long and, for such a day? Any ride that wasn't too long a queue was probably good. I mentioned Wednesday how we did a lot of walking, back and forth, across Cedar Point and this was when it started getting absurd.

We figured Gemini, in the back of the park (we were up front) would be a good ride. Along the way, we saw the queue for Corkscrew was listed as only about 20 minutes. That, too, was a pretty good wait so we jumped in the queue and oh, goodness. They had a lot of switchbacks open in the line. It was closer to 40 minutes all told, although the roller coaster was riding great --- everything was riding great, really --- and we were able to pay attention to parts behind the ride, and angles on the roller coaster, that we never see.

We noticed Top Thrill Dragster running. This is the park's tallest, fastest, and briefest roller coaster; you get up 400 feet, but the whole ride takes something like 16 seconds. We didn't go on it, since it's honestly not that much fun for the usual wait. But it's also the most weather-sensitive roller coaster they have and it was great to see that running in late October. Windseeker, their elevated swing ride, was also running, and that's always down for high winds.

On the way to Gemini we stopped in one of the frozen yogurt shops. They turn out to have coffee and hot chocolate too.

bunny_hugger had been nodding off in the Corkscrew queue and needed the coffee. I just liked the hot chocolate, along with some whipped cream that I'm not sure wasn't meant to be put on yogurt instead. It was fantastic, though.

Gemini also had a wait of about twenty minutes, both on the sign and in reality. They were running only the red train, although two trains; we heard nothing about why the blue train wasn't running or whether it had something to do with the ride being closed the night before. They wouldn't have said anything anyway.

Around this time, the Halloweekends Parade would have been going on up front. We had seen it that day we dropped in back in September, which we thought at the time would at least take some pressure off us for our proper Halloweekends visit. This worked perfectly and I can't say the weather was significantly different between the last weekend of September and our late-October visit, this year.

We walked back up the Frontier Trail toward the front of the park. We poked in to the candle shop where we learned that the place had been ``remodeled'', with stuff that wasn't selling being taken off the shelves. And, yeah, being cut to less than half the size with almost none of the interesting candles on sale anymore is remodeling. The person working there admitted it was weird that they weren't making any more of the fall-leaf-shape candles that were always big sellers. But what all did happen we still haven't gotten.

After all that walking we got back to the Iron Dragon, right near Cupzilla, where the line was supposedly an hour. We detoured instead to Rougarou, one of those roller coasters everybody forgets exists because it's in a hard-to-find spot and isn't all that exciting a ride. It started life as a stand-up coaster, and was converted to one you get seats for like a normal ride. This is generally more comfortable but it does mean it's always a little less intense than the ride geometry suggests it should be. Then we got our Iron Dragon ride, with a wait that was ... oh, you know by now. We had surprisingly uniform wait times for when we actually went on things, most of the day.

And then we walked again to the front of the park, to do a circuit of the three carousels, naturally. And then to ride Blue Streak, which by then --- about 6:30 --- was down to a nearly normal five- or ten-minute wait. In the last 90 minutes of the park's day the crowd was ... not gone, really, but at least dissipating.

There was, for example, still enough crowd for all the cars in the Dodgem ride to be occupied and we took that ride. We tend to forget about the Dodgems, or to put them off until ``later'' and never pick them up again, not since they moved over next to Wicked Twister where we forget it exists.

After our ride on Cedar Downs we figured to make Millennium Force our last ride of the night. We'd maybe have time for one more ride, along the way.

bunny_hugger asked if I had ideas and all I could think of that was not far off the track and not likely to have a long line were some of the small flat rides that fade into invisibility, like the Scrambler or the Matterhorn. Both names surprised her and we went over to Matterhorn. The ride operator thought we could both fit in a single car, and was too optimistic about how our bodies would interact with the seat belt and all. I left

bunny_hugger in the ride car and went to the operator, who had already put people into every other seat on the ride, so she said I could get on the next ride cycle. So I stood there grumpily and watching the minutes evaporate on a ride that, really, didn't have that long a ride cycle. It just takes time to load and safety-check people and all.

bunny_hugger didn't enjoy either, since she kept seeing me standing forlorn at the gate. And the ride doesn't do the cycle where you go in reverse like the ride was designed for. Cedar Point and its sister parks have some fear of rides that go in reverse that's got to reflect some park director's personal phobia. When all that was done I didn't want to take the time for my own ride cycle, so I just went through to the exit and

bunny_hugger wanted to know why I did that when she would've waited. Overall, Matterhorn was a mistake all along.

As we walked to Millennium Force we saw the queue for Iron Dragon was almost nothing; we could easily have gotten an early-night ride on that instead, had we gone for it instead of trying Matterhorn.

The line for Millennium Force was not quite an hour. It did take us through the close of the park. Still, enough of the park's lights were still on that we could enjoy the spectacle of the park spread out like a toy, 300 feet beneath us, and whipping past us at 70 miles per hour or whatever Millennium Force does. It's a great steel roller coaster, and riding it feels like flying, which is probably why twenty years after it was built it's still getting such long queues.

And that finished out our weekend. We had to walk the long way around the park to get to our car; we passed, for example, Matterhorn just after its lights were turned out, and went past the Musik Express just as its lights turned off. I think we actually got to our car about 9 pm, an hour after the park's close.

bunny_hugger needed to do some stuff for school, and we were able to use the park's Wifi to do it. This revealed a minor catastrophe, that something she'd meant to publish to a class hadn't published, and this destroyed her mood. Not just that she hadn't published the thing that her class needed, but that it had gone on a very long time without anyone in the class asking her about it, implying that none of her students were even looking. Between my still feeling dumb over Matternhorn and this it started our drive home on a sour note. I even forgot to divert to taking the Chaussee, the pre-1950s exit from the park that everyone worries will be closed off some year. Although that's probably all right; I never quite remember how to get from that end to the Ohio Turnpike without going a long way in the wrong direction anyway.

We got home safe and sound. We had hoped that we'd spend Monday afternoon visiting

bunny_hugger's parents before picking up Sunshine from them. But

bunny_hugger had enough unfinished work that she didn't feel she could go. So I went alone, and spent several hours describing the high points of the weekend and leaving out the bad. I stand by this decision.

Trivia: Harry Lender's first job on immigrating to the United States in 1927 was at a New Jersey bagel bakery. Source: The Bagel: The Surprising History Of A Modest Bread,, Maria Balinska.

PS: Exploiting my A-to-Z archives: Quasirandom Numbers, a chance to unify writing about Monte Carlo methods and the Merry-Go-Round Museum.

PPS: Uh, somehow I'm already up to pictures of the Friday night dance at Anthrohio 2018. All right, then. 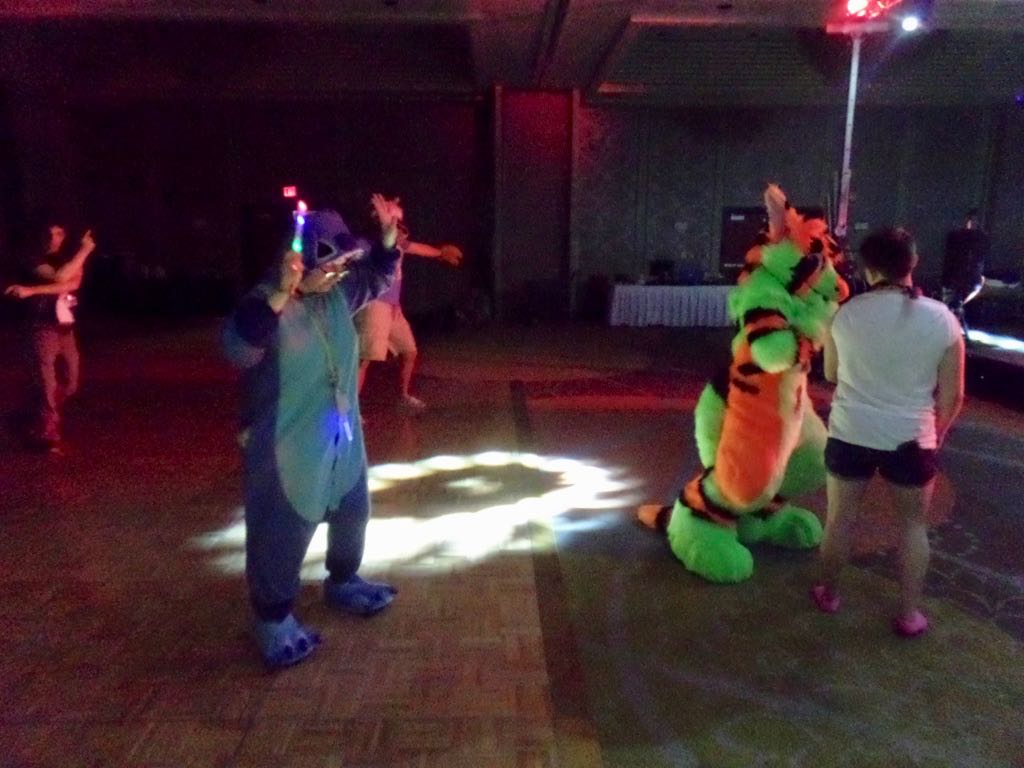 We didn't get there until after midnight, and in the last hour the crowd was getting fairly sparse. 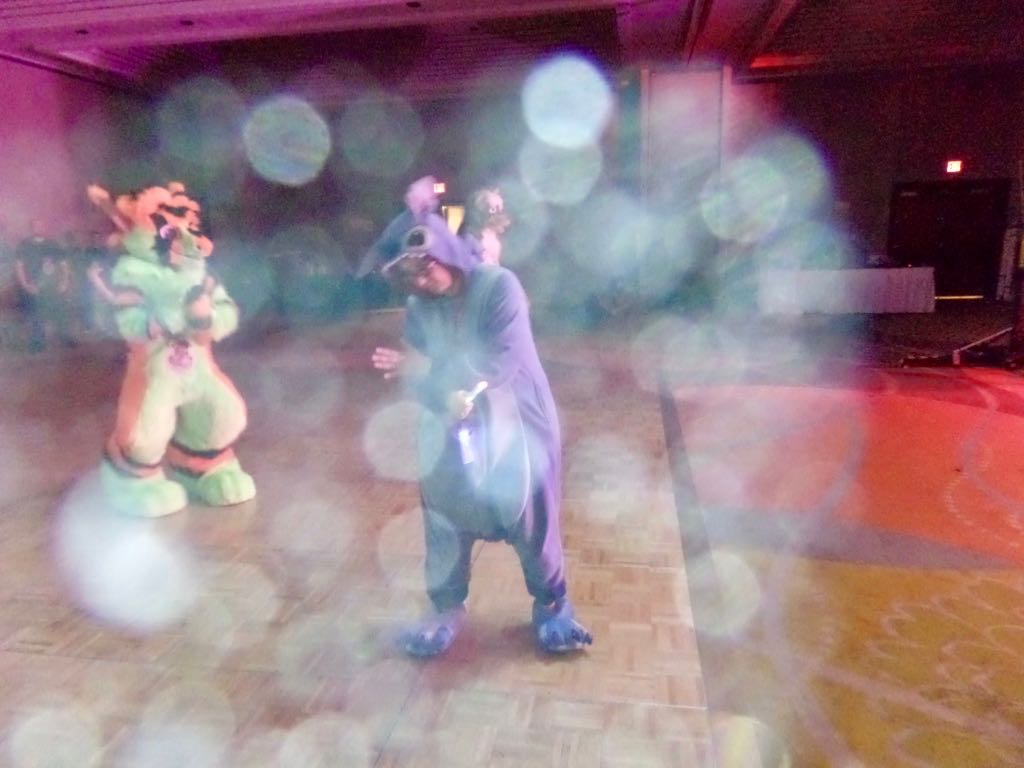 So this all must be before the great lens cleaning, although I like that this has come together to make it look like

bunny_hugger is being trapped by an energy being on the Original Star Trek. 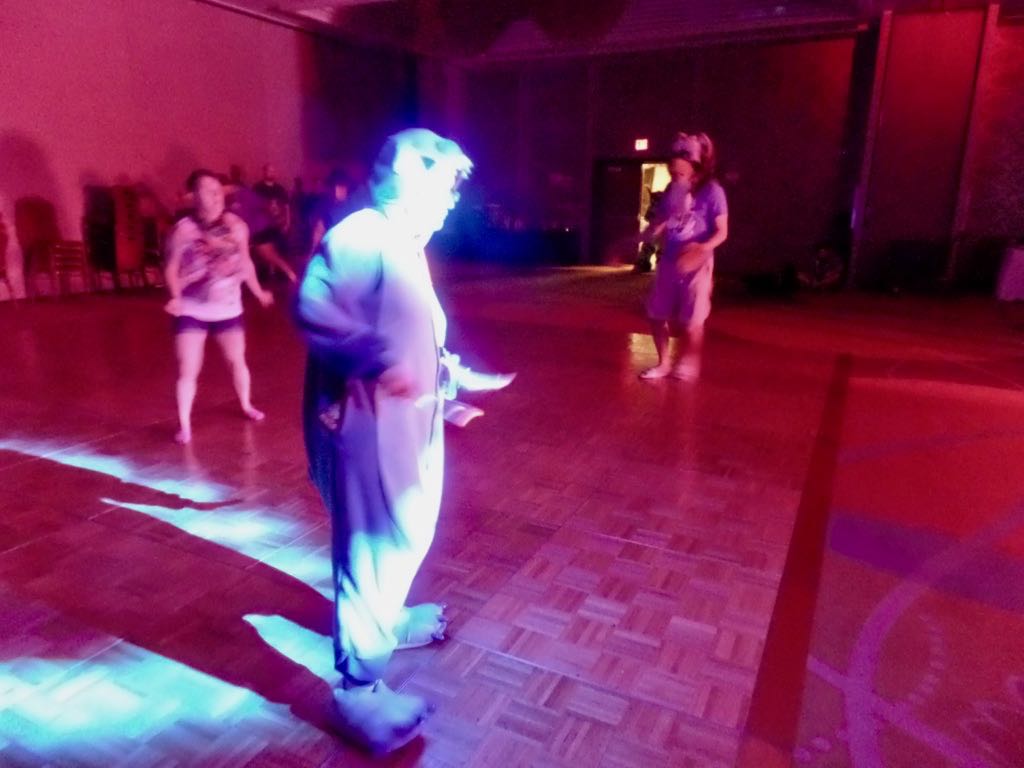 Stitch was always the sort of person who'd grab the spotlight.