Some other cat looking over his shoulder at me

We chose to leave the last weekend of October open in case we wanted to go to some Halloween party or event in town. There was one, not at all in town, we really hoped we'd get to. This would be MB's Halloween party at his house in Mount Clements. MB owns, and routes, the games at the Sparks pinball museum, at a bowling alley near his home. MB is an uncanny twin to us, especially

bunny_hugger. He's also big on decorating for holidays. And old-time amusement park attractions. Coin-op games. His favorite pinball machine is even FunHouse, like me and

Happily he had another party this year, and we were welcome, eagerly so. We drove to Flint, to MWS's, to carpool the rest of the way, something that gave

bunny_hugger that little extra time to do class work in the car. At MWS's house briefly we got to see his dogs. The shy one seemed, momentarily, to like seeing

bunny_hugger. Not me. But the enthusiasm didn't last, and she soon retreated to stand next to K and draw no closer, thank you, and maybe growl a little too softly to be heard. We all cope with our anxieties in our own ways.

Mount Clemens is near Detroit, but on the eastern side, so it's dreadfully far from us, one of the reasons we don't play at Sparks events more. As we pulled up to the street MWS, who'd been at the party last year (when we were at Cedar Point for Halloweekends) asked if we could tell which house it was.

It was of course the house with a front lawn full of decorations: zombies and gravestones and reproduction freak show signs, colored lights and smoke machines, even a fortune telling machine. It was as lavishly decorated as anything from Halloweekends, but just this one plot of land in an older city neighborhood. I was torn between amazement at the scene and sorrow for the neighbors. I have to suppose they've worked out some agreements.

MB's house --- originally built around 1885, he said --- was no less decorated inside. The front parlor, for example, had mourning wreaths and a coffin set up and, as MB pointed out, this was the room that funerals would have been, and surely were, held in, back in the day. It also had a Safecracker pinball game that he wasn't able to move out in time. We saw a bunch of people in the dining room, sitting around the circular table with flickering candle-lights and thought they were maybe doing a seance. No, but everyone agreed, it would have reasonable.

And his house is historically respectful too, very much in line with the sense that

bunny_hugger and I have about our own house, which is a mere 91 years old. You know, that attitude that there's this historical integrity to the house we need to respect and preserve. He goes farther: he's got vintage, or at least vintage-looking furnishings, including a gas stove and a Monitor-hood refrigerator that would be in place for the 1920s and that, apparently, he still uses and that work fine.

His backyard had a nice fire pit and seating and such, although we didn't spend much time there. His detached garage was filled with pinball games, all in great shape. The lone disappointment is that none of his several FunHouse games were there. But the newest of his tables was Stern's RollerCoaster Tycoon, based on the video game for some reason, and one that we never see on location anywhere. Over the night we found enough times to play, though, and started to work out some of what you should do in the game. It's very like Stern's Monopoly, a license they also had for some reason at about the same time. MWS put his name on the high score table. Me, I also had some great luck playing, and got the (surely recently re-set) high score on two tables over the night.

MB was eager to show off his memorabilia, especially things he had salvaged from older Chuck-E-Cheese's or Little Caesarland or other sites. Or just old neighborhood bar signs, that kind of thing. That sort of vintage ... you know ... little stuff was so appealing to us personally.

It's not just commercial signage and stuff that interests MB, though. He's got a lighted cabinet with souvenirs from the days when Mount Clemens was the bathing resort for the Detroit/Windsor area. Souvenir dishes, photographs, pennants, all sorts of things from the days when people with money would come to partake of the waters. Those people including, by the way,

bunny_hugger's grandparents, who had a mansion on a street bearing their family name, that turned out to be just a few blocks away from MB's house. Sad to say we forgot when we drove hom to go over and look at things. The mansion's been torn down long ago, although the carriage house, relocated, survives as a family home yet.

We had a couples costume, by the way, albeit one we didn't have to go to any effort for. We had almost no time to figure out costumes.

bunny_hugger wore her Stitch kigurumi, and I my Angel. People loved seeing us as a pair. I think the great hulking mass of me in genetic-abomination pink captured their imagination too. In separate trips to Spirit Halloween, I had bought a Space Blaster pistol that had that right bulbous look for Stitch in Evil Mode, and

bunny_hugger had bought a ten-dollar toy ukulele for Stitch in Good Mode. The ukelele would be no end of fascination to her because it was built well enough to have actual tuning pegs that could adjust the tension on the strings. But it was built shoddy enough that a single guitar string stretched out as two ukelele strings, so that both ends were tied to a tuning peg and it was impossible to tune one string independently of the other. Not that it would have held tune anyway, but

bunny_hugger threatened for a while there to become obsessed with the problem of tuning this toy instrument to any kind of recognizable standard at all. MWS got some skeleton costumes and a blade, coming passably close to some skeleton warriors that you can encounter in the pinball game Tales of the Arabian Nights, giving him a costume that was legitimately pinball-related this year.

As usually happens when we get to a party we were among the last people to leave. It was past 1 am when we played our last game and said our last farewells to MB --- and even then we saw someone in a new costume to us, as the Stay-Puft Marshmallow Man --- and drove the hour back to MWS's place. And after that, the hour back to our place. We got back sometime after 3 am, to Sunshine's mild confusion. Well, she would be more confused the next day at 3 am.

Trivia: Excavation for the foundations of the Chrysler Building began 11 November 1928. Source: Higher: A Historic Race to the Sky and the Making of a City, Neal Bascomb.

PS: Exploiting my A-to-Z Archives: Ricci Tensor, an essay about a thing I believe is important but that I also don't think I understand well enough.

PPS: Saturday at Anthrohio 2018! You know how Saturdays always start. 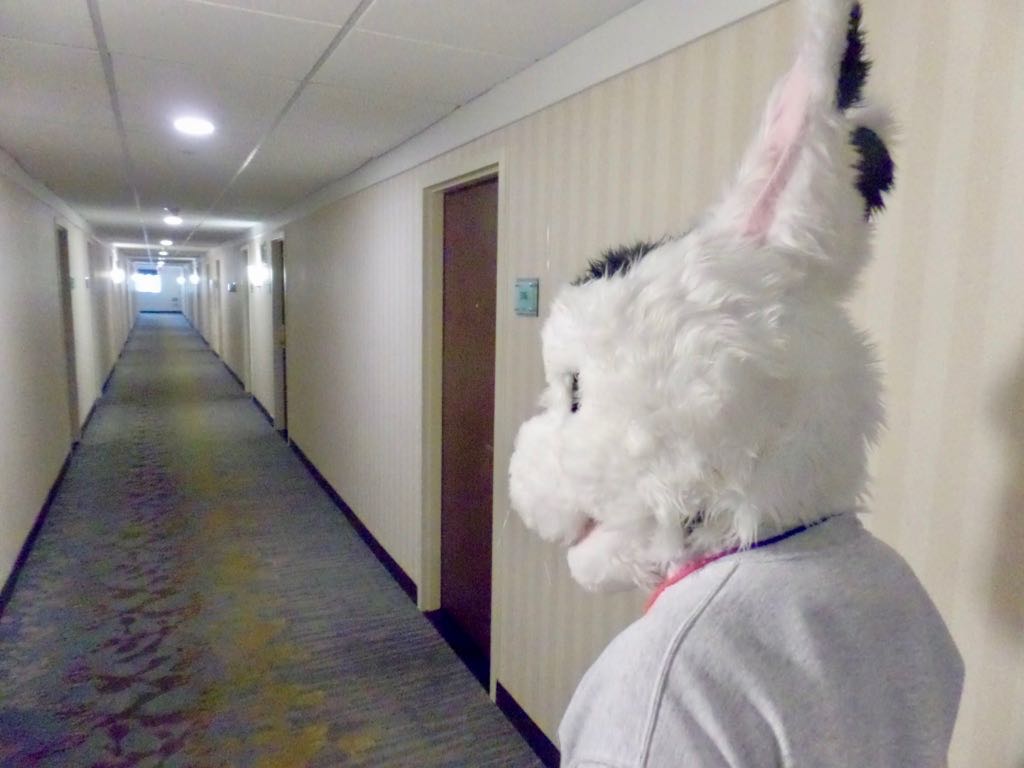 bunny_hugger, Saturday just about noon, trying to find where in the hotel she's supposed to go to be in the Fursuit Parade. 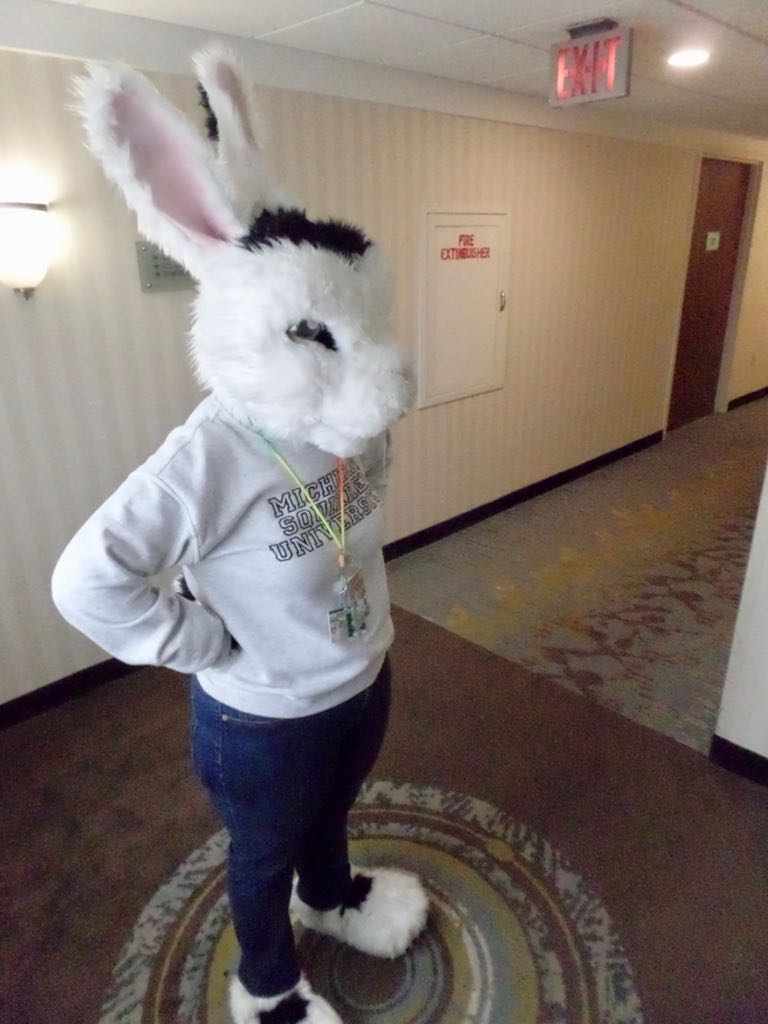 Seriously though, where in this strange and alien and unnecessary hotel is the Fursuit Parade? 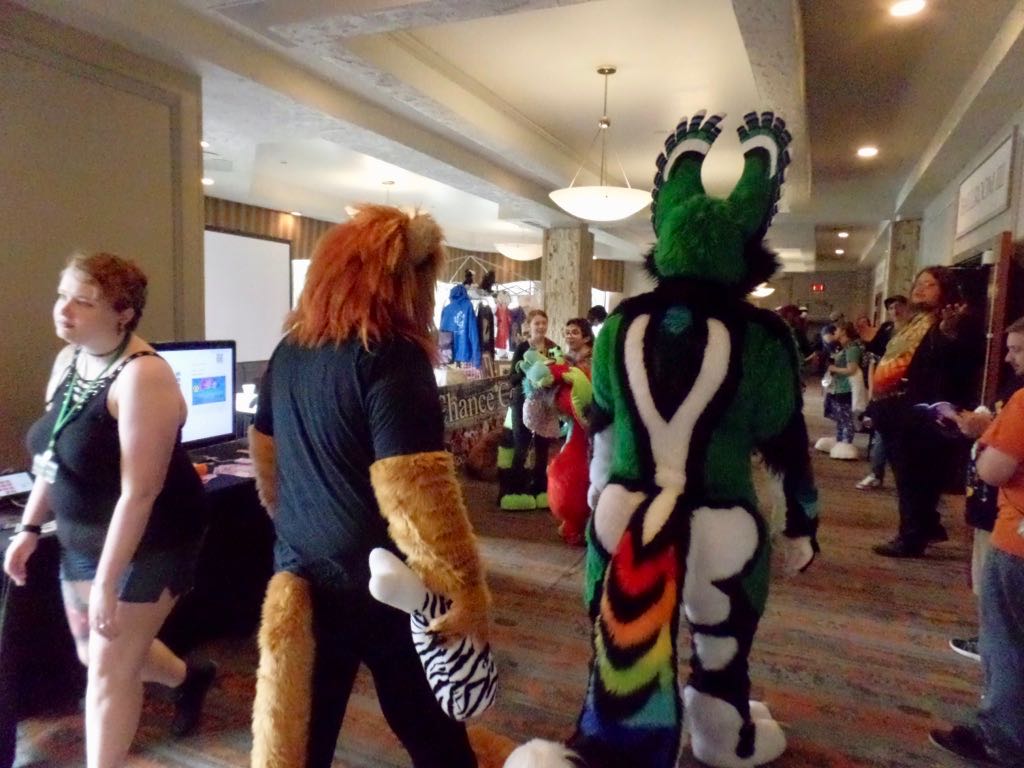 Ah! Maybe one of these fursuiters gathering in groups moving together might know where to find the Fursuit Parade!