We knew a couple things, going into Kings Island. They opened at 11. We had Platinum season passes, good for an hour's early admission. Our hotel was maybe ten minutes from the park. We passed it, to our surprise, on the way to the hotel the night before. Vortex was one of the three early-admission roller coasters. A huge fraction of the population would be going there. We had to be at the park at 10 on the dot. Oh, we were tired. But if we got up around 8:30 or so we'd be able to shower, dress, maybe even grab continental breakfast, check out, and be on our way.

bunny_hugger slept restlessly, as she will when it's important to wake early. The bed, old enough to sag in the middle, didn't help.

I took a quick shower; the biggest delay in our ever getting out the door is how I'm one-quarter mermaid and will shower for up to four hours, given the chance. But we made good time, despite one of

bunny_hugger's students not understanding that the e-mail sent to explain a thing actually explained the thing the student was worried about. While

bunny_hugger finished dressing and addressing the student, I loaded the car up and snagged some bagels and tea. And we were off by 9:30, making great time! We drove the short while to the park, and even though I turned into the wrong parking lot once, we got to the front entrance by ten minutes to 10.

There was a long enough line to go back onto the main road, just like Great Adventure in the Bad Old Days of the 90s. All right. Nothing much seemed to be happening. One car ahead of us dispatched a kid to walk over the hill and look at the parking lot booths; she came back and everybody just sat a while. Finally, right about 10:00, they opened the gates and we cheered as, all right, we were missing some early-admission time but apparently everybody else was missing it too. We got a great parking spot, in The Beast section of the parking lot and just a few cars off the nearest possible spot.

The park had set up a giant Christmas tree already. Kings Island does a December holiday event and we got to thinking, you know, this isn't so bad a drive really, why couldn't we do this in December? I mean, if they had any roller coasters open or something? And the weather wouldn't be too brutal?

We got through the metal detectors and growled at their absurdity. And then got to the front gate, which was decorated. And still decorated for Halloween. The whole entrance plaza was covered with a haunted house decor, and pretty well too: if we didn't know what the entrance really looked like we'd have supposed it was a Haunted House, or at least a New England Cottage, design. There was a huge line in the leftmost lane, which was closed (but also nearest the bathroom, and the one that you approach first after the metal detectors). All right. There were shorter lines over to the right. We kept going and found ... none that were open, as far as we could tell. It was 10:10. There was no way in.

bunny_hugger wore the hoodie she'd gotten last year, of a skeleton riding a skeleton carousel horse, for Cedar Point. A guy ahead of us --- who pointed out someone wearing Maxx Force, newest coater at Six Flags Great America --- saw mine and said RIP Clementon. We agreed that was a shock and terrible. Watching the crowd is how I learned there's a Loch Ness Monster coaster, at Busch Gardens Williamsburg. I think we spotted someone wearing Geauga Lake, which park closed a dozen years ago (and which gave Kings Island the coaster Firehawk, removed at the end of last year). Some people were just ride enthusiasts. Some were workers at other parks. Some, we'd learn later, were former Vortex ride crew.

Thing is we kept on waiting at the gate. We started speculating about what could have gone wrong. Was the park just ... not ready, somehow, for the last day of the season? Did we misunderstand and the park opened at noon? Plausible since we kept seeing on the monitors the notice that The Great Pumpkin Fest at Camp Snoopy opened at noon. But, no, park opening was 11:00.

What transpired is that early admission, at least for Halloweekends at Kings Island, is only a half-hour. We are both sure that it had been a full hour when we came in the regular season. But early admission now was only three rides. With that small a plate, yeah, a half-hour is probably plenty.

And finally they opened the gate. We proved to be well-positioned: they had roped off all but a single path leading through the park, going to Mystic Timbers, Beast, and finally Vortex, and this path started off to the right. So all those people by the left had nothing but an extra wait and the chance to go to the bathroom, which we could have both used, honestly. Along the way a few people peeled off to ride Mystic Timbers early, or to ride The Beast early. And these would be wise choices on anything but the final day of Vortex's ride. We didn't know what they were thinking.

We hurried toward Vortex. Easy for me, who has long legs. More challenging for

bunny_hugger. So we noticed without stopping to admire the decoration of the park inside, like the trails of jack-o-lanterns, or the towers made of pumpkins going up the support legs of rides. We'd have time later, we hoped. We got to Vortex as they were still running test trains, and fell into the queue to find it was not long at all. We admired its launch station --- built a half-decade before the ride, for a short-lived roller coaster named The Bat --- and its Haunted New England Cottage design. The design made sense for a The Bat. It never made sense for Vortex, which had a logo of a robot arm twisting metal tracks around, but it was affordable. They had ribbons commemorating the ride's 33rd year there. And a small memorial, Vortex 1987 - 2019, in stones and with flowers beside, on the ground by the transfer track. And, two minutes after joining the queue, we were in the station.

There was a short line for the front seat ride. We decided to wait for that. We could have walked on to other seats, but this would be our best bet to ride up front. While we waited --- it was maybe four cycles, and went in no time, as it turns out all three trains were running --- the front-seat ride queue grew to a dozen or more ride cycles. We could watch the process, and admire how fast the crew was at loading people now, and even enjoy the ringing of the bell to announce a train returning, just like they have at older wooden coasters like at Conneaut Lake Park or Seabreeze.

Our recollection of Vortex is that it was a fun twisty ride, a bit rough, a bit head-bangy, but about what you'd expect for the era and the challenging layout it was expected to do. This time, riding up front --- oh look, you can see one of the other trains returning as you go up the lift hill! --- it was ... smooth. Not perfectly, but smooth enough. We could enjoy being on the ride, not guarding our ears from the restraints. Just delighting in feeling dizzy and disoriented and feeling the line of motion suddenly switch around. We expected to appreciate Vortex's last day. We didn't expect to realize this was such a good ride.

We wanted a ride photo. We basically don't get them, but this? This felt like an exceptional day. Especially since we'd discovered a new delight in the ride. But there was a crowd around the booth, and no attendant, and we didn't even see the sample pictures to tell how the picture looked. We decided to forego this. Maybe we'd get a picture on a later ride. The thing we had driven five miles through rain driving no less hard was successfully done.

Trivia: The name Richard Saunders, used by Benjamin Franklin for his Poor Richard's Almanac, was the name of a London physician and astrologer who had produced an almanac in London for two decades in the late 17th century. Franklin knew of the earlier Saunders and may have read surviving copies of the original Richard Saunders' almanac. Source: The First American: The Life and Times of Benjamin Franklin, H W Brands.

Currently Reading: Philosophy of Mathematics: An Introduction to the World of Proofs and Pictures, James Robert Brown. I got into this weird mood of thinking maybe I should actually know a thing about the mathematics I keep talking about all the time.

PS: Exploiting my A-to-Z Archives: Sorites Paradox, an essay I wrote to 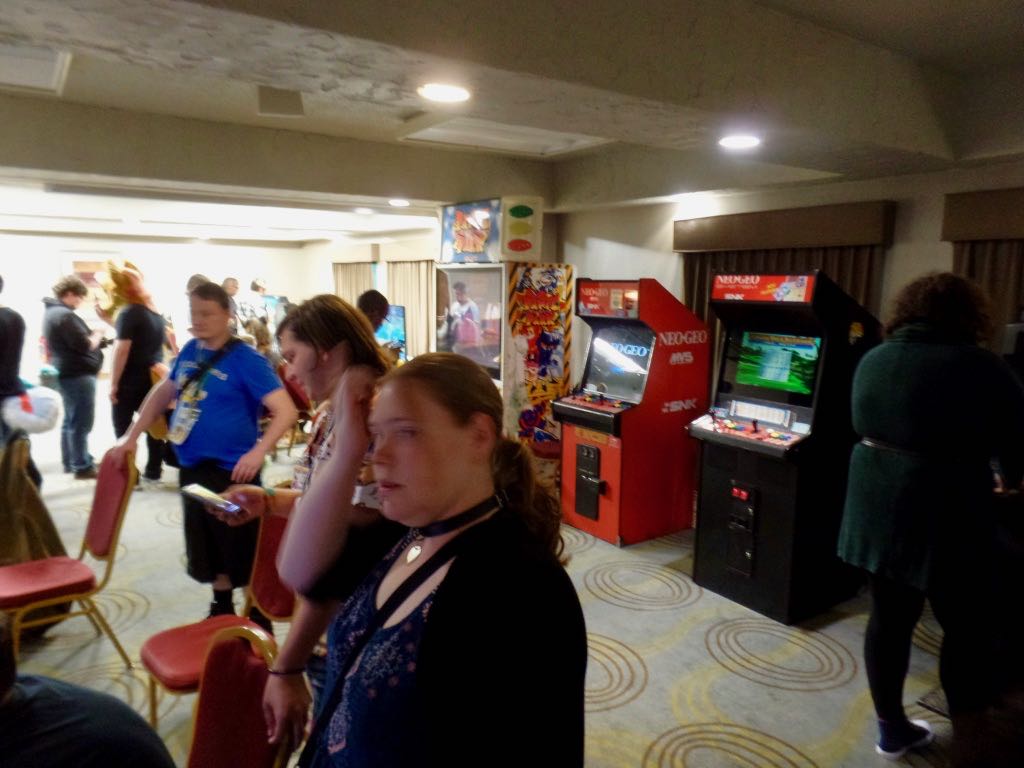 The video game room, which included a couple Neo-Geo cabinets, like was the early 90s or something. 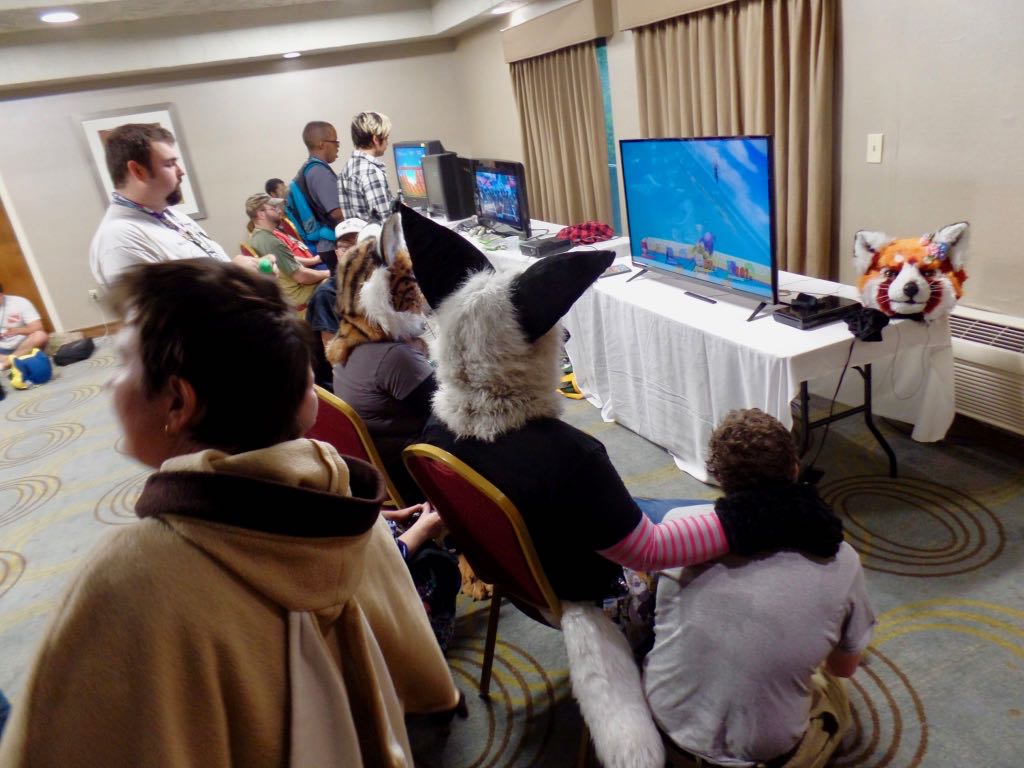 And some of the more normal consoles at the gaming room. Note

bunny_hugger is wearing her bunny hoodie. 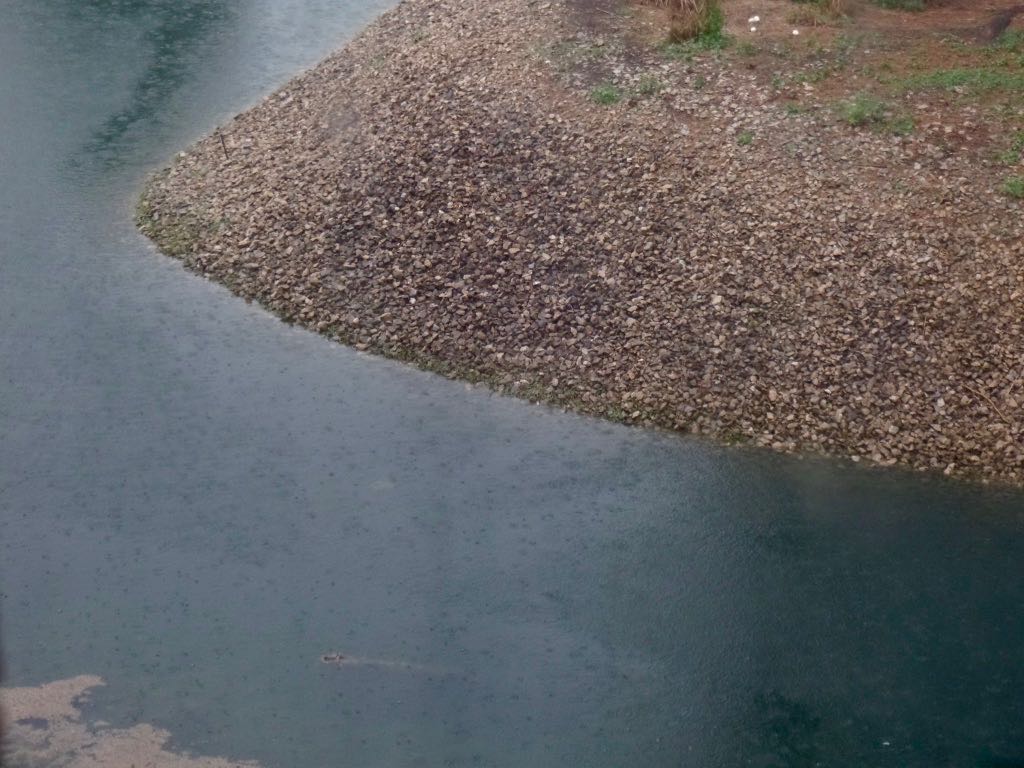 View of one of the scenic ponds outside, in the Saturday afternoon rain.