Yes, maybe we would get a Vortex ride photo on later ride. Maybe a ride ... like ... maybe right now, since it was still about 10 minutes until the park's general opening and the queue was as short as it would ever be the rest of the day. We ran back around, taking a few more pictures, and were right back in the launch station by 10:55. Someone beside us observed that we kept noticing things worth taking pictures of, and fair enough, although a lot of that was that anything was a good photo. The ride looked quite good for its doomed condition, and the fall leaves behind made a great backdrop. The one shortcoming is that the sky was grey; but there was nothing to do for that except wait.

This time we waited for the back seat, unsure whether this would be wise. Back seats are often rougher than front. The motion can be different, especially on a longer train. This time? ... It was not rougher. It was again, a surprisingly smooth ride. Really pleasant. Thrilling, even, with different points where we felt ourselves floating. Floating's gone out of fashion in roller coasters, but it'll return.

Front seat and back seat, just as we might most want. And now the park opened to general admission. There'd be more people coming in for their last ride on Vortex. We ducked out to the bathroom, first, and then decided to make one more try on the roller coaster. The line still wasn't terribly long, although it was getting there. It was finally long enough, for example, that we had time outside the front of the little mock house, and could pose for pictures in front of the ride sign. Also while in the queue someone shoved his way past us --- I assumed it was a park worker for some reason --- and up the steps past us, while I studied how some of the windows in the ride's fake house had grates covering them and others did not.

bunny_hugger warned me a fight was breaking out. The line-cutter and someone else were yelling at each other, and they looked ready to start punching. A woman with that someone else held him back, though, just like you hear about in braggadocio. It kept feeling ready to turn into blows, but never quite did.

In our peaceful section of the queue we looked around, admiring the views. Someone else pointed out some of the footers that were for the original The Bat ride, still there 35 years after that short-lived coaster left this world. For this ride we didn't wait for any particular seat, trusting that just being on anywhere, being in the comfortable middle, was good. And it was; once again, we had a great ride.

And we discovered a sad truth about the ride photos. They were done by some automated scheme tied to an app that you had to download and purchase ahead of time and we were not going to deal with all of that. There were other roller coasters on which we could buy ride photos a la carte, at least we assume. But none of them were the ride we were there specifically to be on.

We did not jump right back into the Vortex line. For one,

bunny_hugger had forgotten something back in the car: her motion sickness pill. This was probably as much roller coaster riding as she could take in short order. And we hadn't really properly eaten. Since we were going out to the car, too, we figured to check the gift shops. It'd be a good chance to find souvenirs. Which would include another brass Christmas tree ornament for Kings Island. They also had some nice souvenir pins, including one commemorating the 50th anniversary of Snoopy's famous landing on the Moon. And, in one shop fully given over to Christmas decorations, some Bronner's-grade Christmas stuff, including a mock 1950s TV set with moving scene inside. Also a carved wood raccoon in hiking gear that was fantastic but also more than two hundred dollars. At a more reasonable $90 was a wood-carved squirrel in scouting-type dress, and while that was more tempting, the squirrel's cap had a real feather and we'd rather not use that. (Real feathers mostly come from slaughtered chickens. Peacock feathers, which are shed without harming the bird, can be safer but --- they can also be gotten from industrial-grade peacock farms.)

We also overheard one family who wanted very much to buy Fast Pass wristbands from the souvenir shop, but the person who did that sale wasn't there then, or possibly that day. The clerk pointed out where to go to buy Fast Pass wristbands instead, and this seemed not to satisfy the family as they went back to the start and asked again, possibly from a different clerk. Also there was one gift shop that was all Ohio merchandise, rather than Kings Island stuff, which, huh. I don't think there's one like that at Cedar Point. There's certainly not one like that at Michigan's Adventure.

Well, souvenirs in hand, we went back to the car, got the motion sickness pill, and went back, this time actually pausing and looking seriously at the decorations. Also at the sky, which had cleared out the clouds and was now mostly sunny and blue. Also at what there might be to eat. Kings Island has this nice guide to eating options in the park, and we saw one of them was a restaurant with Impossible Burgers. We figured, we've got to go supporting that.

The restaurant was an indoor sit-down one. The line was out the door. But this was not the sign of doom we feared. As you joined the queue a staffer out front handed you a menu. You get up to the cashier and put in your order, and get one of those buzzing flashing pagers, and then go sit and wait for the meal to catch up with you. The queue didn't take long to go through. Sitting and waiting, that took some time, but probably because they were making the burgers fresh. They were really good: better than Burger King, not as good as Stella's. Really great to see offered, though, at an amusement park, and especially good to see done well.

We spent a good while eating, and enjoying sitting, and on the tv screens seeing bits of the NFL game from London. Also,

bunny_hugger learned that they're playing NFL football games in London these days. To her question ``why'' I could only answer: shrug? Anyway, we'd enjoyed three great rides on Vortex, got some things to bring home, and gotten a satisfying lunch, and it was only maybe a quarter to 2:00. Everytihng we did for the next five hours would be bonus.

PS: Exploiting my A-to-Z Archives: Transcendental Number, an essay where I learned how much fun it is to share the odd weird little things about numbers, like how we know stuff is true about nearly all of them, but don't know many numbers it's true for. 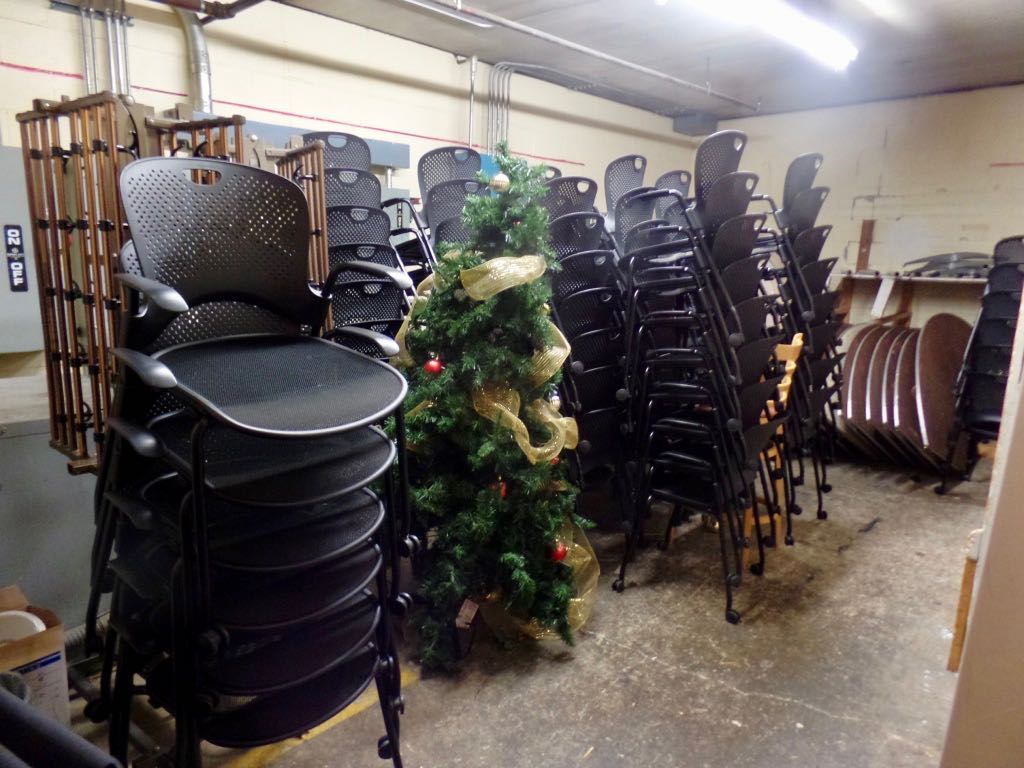 So a door to one of the supply rooms was open and inside was the heaping piles of tables and chairs you might expect, plus a Christmas tree all decorated and unaware that it was Memorial Day weekend. 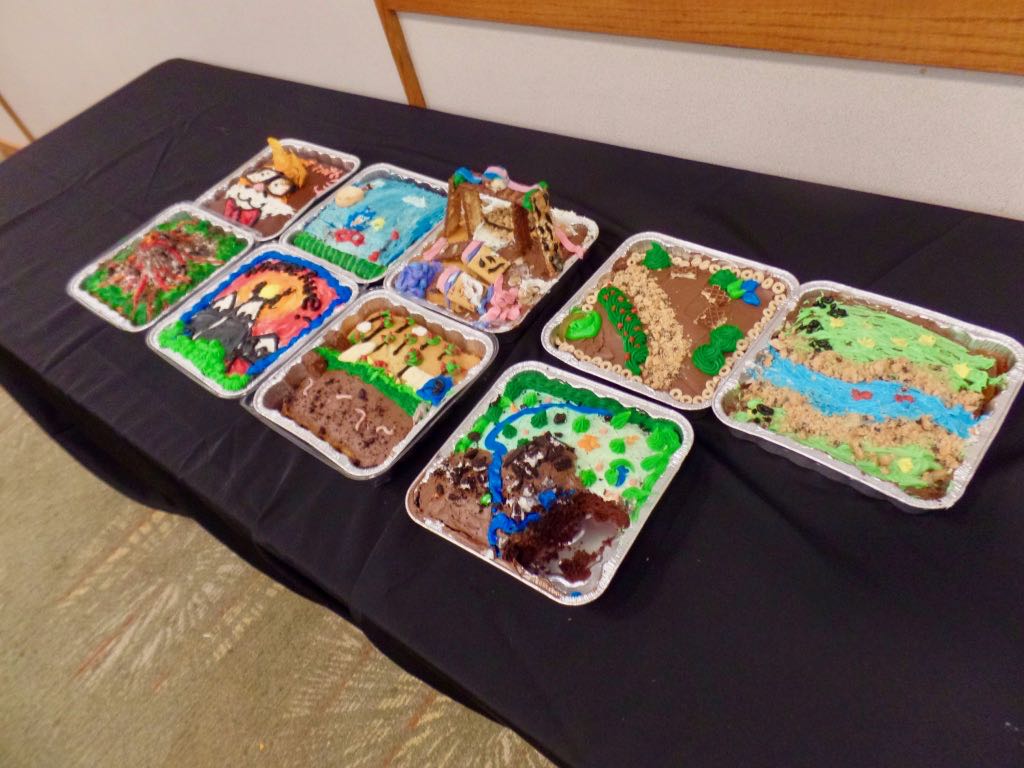 It's only been a few hours and already the cake supply is down by more than a quarter. I take it as a point of pride ours was among the first people felt safe to touch. 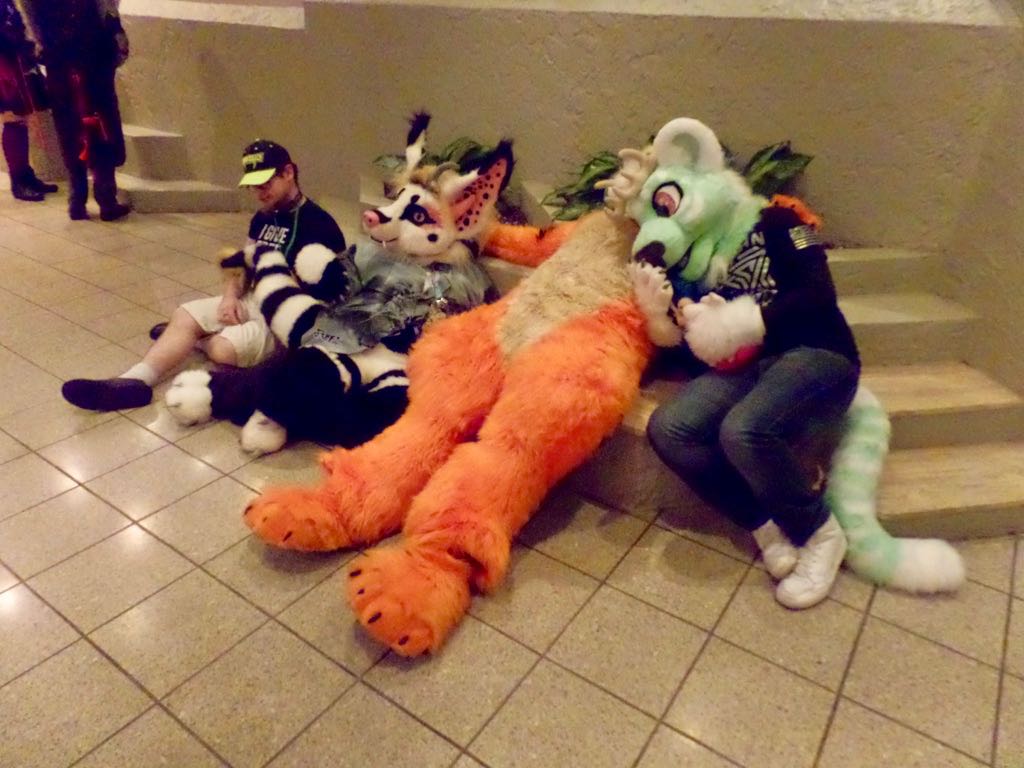 Fursuiters flopping out on that complex of decorative steps near the lobby.