The arrow points the way across the waiting prairie

So back to Kings Island. We'd had three Vortex rides, souvenir-shopping, and lunch. What to do now? Well, we were right near Mystic Timbers, their two-year-old wooden roller coaster. Its line didn't look too bad; why not ride that? Things we forgot: oh yeah, there's ride queues that hide how long the line is. There's no signs at the ride entrances saying how long the queues are, something which annoyed us at Canada's Wonderland too. Our wait wound end up something like 45 minutes, but on the bright side, we got to ride Mystic Timbers, which is a really good wooden roller coaster. Also in the queue we spotted some more people with ride t-shirts from other parks, including one kid whose hoodie was, I want to say, from Seabreeze out in Rochester. It was one of those parks we've only visited the one time. Also while waiting we could see the Race For Your Life, Charlie Brown log flume, closed and emptied for the end of the regular season. The back of one of the log flume rides has a ghost sign faintly reading ``Outpost Powder Magazine'' and I guess, oh yeah, that was one of the many bonkers plot elements of that movie, wasn't it?

But the roller coaster, going through autumn leaves, was great. While waiting ``in the shed'' --- a holding spot for returning coasters while the next train finishes dispatch --- we got a haunt video we've seen before, one of swarming bats. There are reportedly three of them and we've seen two; we don't know what process chooses which to show. There's one, with haunted trees, that's apparently quite rare.

The park was lovely; Kings Island was well-designed to start, in the early 70s when everyone figured to copy the Disney formula of pay-one-price parks that looked nice all over. And the change of colors gave everything gorgeous new backgrounds. While admiring the tree colors we saw the painted pawprints leading to The Beast, Kings Island's signature roller coaster. We couldn't pass that up.

This would be another 45-minute wait, but it's not like we could expect them to open a second Beast for us. Also they were running several trains, like you'd hope. The trains were looking good, too, repainted in the several colors that the ride originally had when it opened in 1979. Also it turns out this was The Beast's anniversary year so we were fortunate to get a visit during that. I don't know if this were added for the anniversary year but they had signs in the later queue area with ride trivia, like the cost of the ride then (US$3.8 million, from 1978 to 1979) and what it'd likely cost today (about $22 million) or that it still holds the Guinness Book of World Records for longest wooden roller coaster (7,359 feet, four minutes and ten seconds). In the later part of the queue we also had a good view of Vortex, adjacent, and took photographs of it in a lot of great angles against a perfectly blue sky. Ride operators agreed with us that Vortex looked great, and that this was the spot to see it from.

Also, The Beast was riding great. We expect a bit of roughness on a roller coaster, especially one like The Beast which was designed by someone who kind of technically speaking didn't know what he was doing, but was hired by people who didn't know that, which is why it rides like a sandbox project in Roller Coaster Tycoon. We remembered some hard patches when we rode it in 2017. But this time? No, it was sweet. Fast, rattly enough to be fun, but not something that, say, threatened our heads in the final helix, when the ride goes around and around (horizontally) for a good 540 degrees at top speed.

On our way to the antique carousel we found the Kings Island Rides Graveyard. It wasn't as fun as the one at Cedar Point and I don't think just because we know these rides less (mostly by lore). The gravestones don't give dates for the rides, for example, nor epigrams for particularly beloved gone rides. Some of them, also, seem to just be generic names, not even of people we remember as connected to the park, although that might just be our ignorance. But there's some fun in this anyway, such as the gravestone showing the logo for Racer, their racing roller coaster, backwards. Before Cedar Fair bought the park, one train on Racer would ride facing backwards. (Cedar Fair doesn't truck with anything running backwards, even if it's designed to.) And an odd moment: they have a gravestone for Son of Beast, the short-lived wooden roller coaster. The odd part here is there's already an actual, full-time ``eternal flame'' memorial to Son of Beast at its location near what's now the Banshee roller coaster. There was set up a coffin and gravesite and a bunch of empty seats; if this was to be a ceremony for Vortex we knew nothing of it. Didn't hear anything about it at least.

Also on the way to this we passed the Coney Island Midway, founded on rides taken from the original Coney Island. Its Halloween haunted-attraction livery was called the Zombie Mall. Some of the buildings were ``boarded up'' for, I infer, haunted houses of zombies rampaging through Kill-Mart and the Tumble Bug Market. That name caught our attention since the Tumble Bug --- which was at Coney Island/Kings Island from the 1920s until 1985 --- is just something you don't see anymore. Except at Conneaut Lake Park and at Kennywood (where it's the Turtle).

The antique carousel --- Philadelphia Toboggan Company carousel #79, moved from Coney Island Cincinnati --- was in good shape. We spent a ride cycle trying to work out how many shield horses the ride had. These are, literally, horses bearing the Philadelphia Toboggan Company shield; originally these marked the lead horse, where to start taking tickets from riders, but PTC made more shield horses than they had carousel orders for. So this one had, we were trying to work out, three or four shield horses. We also found on the insides of their head shields reading the horse's row and serial number;

bunny_hugger rode Row 1 (an outer horse), number 233. Mine, next to her, was Row 2, Number 353. Quite possibly the horses have been rearranged in order since the carousel began running in 1926.

The other roller coaster we really wanted to be sure we got on was Racer, and this twin coaster did not have long lines at all; I think the longer of our waits was only about 15 minutes. On both sides of the ride we were able to get some good views of Orion, the steel roller coaster under construction for next year. We worried that it would crowd out The Beast, but what it really seems to be doing is eating up space on the left side of Racer instead.

Between our Racer rides we went to the lower parts of the park. One, to ride the current Bat. It's a ride like Iron Dragon, at Cedar Point, a suspended coaster; it's taller, though, and faster, but a shorter ride. While on the surprisingly long line we spotted someone wearing his Blackpool Pleasure Beach hoodie. Also we overheard a different guy talking on the phone about how yeah, he was at the park, but no, he thought Vortex was overrated and he wasn't waiting in an hour-plus ride for that. It seemed a little unkind but it's not like he was talking to us, or even saying anything truly bad. Just that he didn't think Vortex was that big a deal.

We also got in a ride on Adventure Express, their mine ride. Unlike most mine rides, it's themed not to the Old West but rather to a jungle-exploring lost-world thing and it won't surprise you that when Paramount owned the park they played Indiana Jones music in the queues. And it was someone's birthday, so the ride operators called that out when that train loaded up. Apparently you can just get a ``Today's My Birthday'' patch when you go to Kings Island, and make potentially every ride into that moment when the whole restaurant's wait staff comes out clapping in synch.

We were coming up on the last hour of the day, and of Vortex's public life. Cedar Fair practice is that if you're in the queue when the park closes, you ride, so ... what might we ride to fill some of that last half-hour usefully? Well, how about Kings Island's beloved and newest attraction, which it will not surprise you to learn is ... the ... Antique Autos. Really. They lost their antique-cars ride years ago, and put a new one in this year, and everyone loves it. The queue for it was really long all day, but we imagined it'd have dwindled some by now. And it had, although it was still both long and slow-moving and a hornet got very interested in my Fanta Zero Orange drink. Waiting, though, gave us the time to appreciate little jokes of the ride, such as that every license plate was a reference to one of the park's rides. Like, 'BST-079'? The Beast, 1979. 'RCR-072'? Racer, 1972. Not all of them were roller coasters, which gave us our deepest puzzles trying to work this out. And it was a pleasant ride, with nice little in-jokey references, such as a faux vintage advertisement for Racer Radio, featuring twin-beam antenna technology. Racer is the racing coaster, with every element of the ride (basically) duplicated. That kind of humor.

The Antique Cars queue was slow-moving, though, and the ride seemed to slow down even more as we got closer to it. (A group ahead of us was extremely complicated and slow about just getting into the cars, somehow, for example.) We worried whether we'd have time to go to the bathroom and get into the Vortex queue.

But the Vortex queue already didn't just reach to the end of the built-in queue, and then double back and reach past the end of the temporary queue they'd assembled, but spilled on for a good hundred feet past the end of that, petering out in a vague mass near a haunted-house prop ambulance. There was not any possible way we might last --- well, that grump on The Bat said the queue was an hour long then --- maybe an hour and a half without a bathroom break.

It's all right. We were off the Antique Cars by 6:40. We went to the bathroom and joined the nebulous end of the queue in plenty of time, confident that we would have one final ride on Vortex.

Trivia: The Cadbury logo, adopted in 1921, was an adaptation of William Cadbury's signature. (William was one grandson of the company founder John Cadbury.) Source: Chocolate Wars: The 150-Year Rivalry between the World's Greatest Chocolate Makers, Deborah Cadbury.

PPS: Would you believe it's Sunday of Anthrohio 2018 already? Yeah, amazing how the time flies. 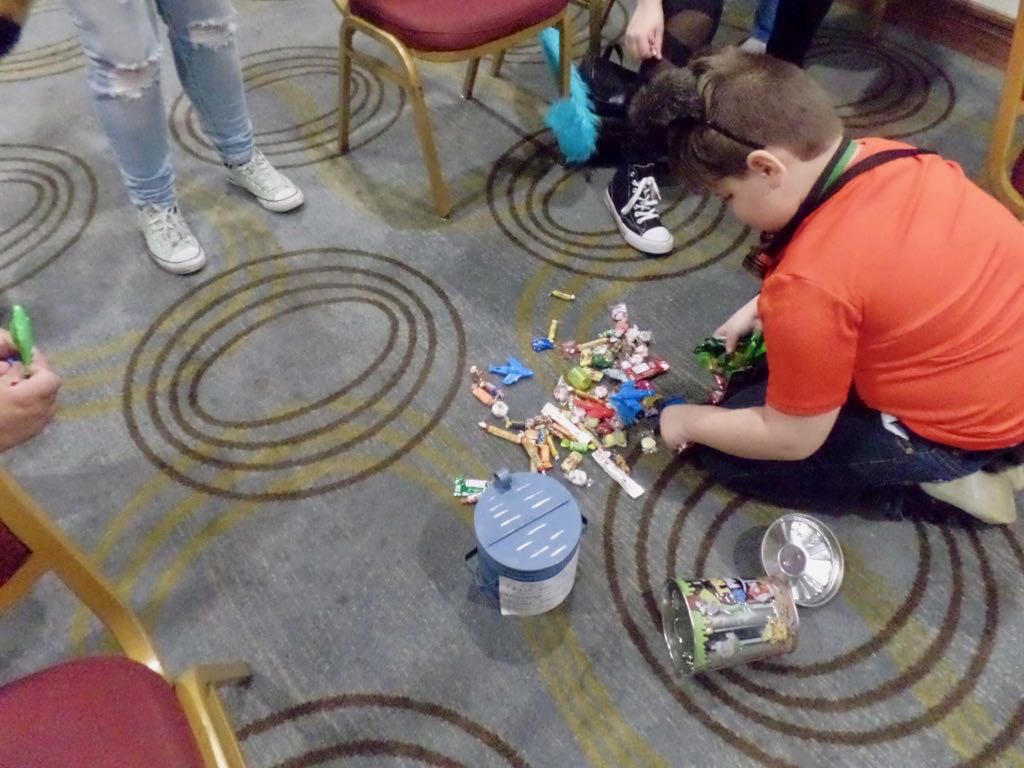 A happy moment at the Raccoons and Procyonids SIG: the tipping over of the trash bins and the sorting out of candy within. 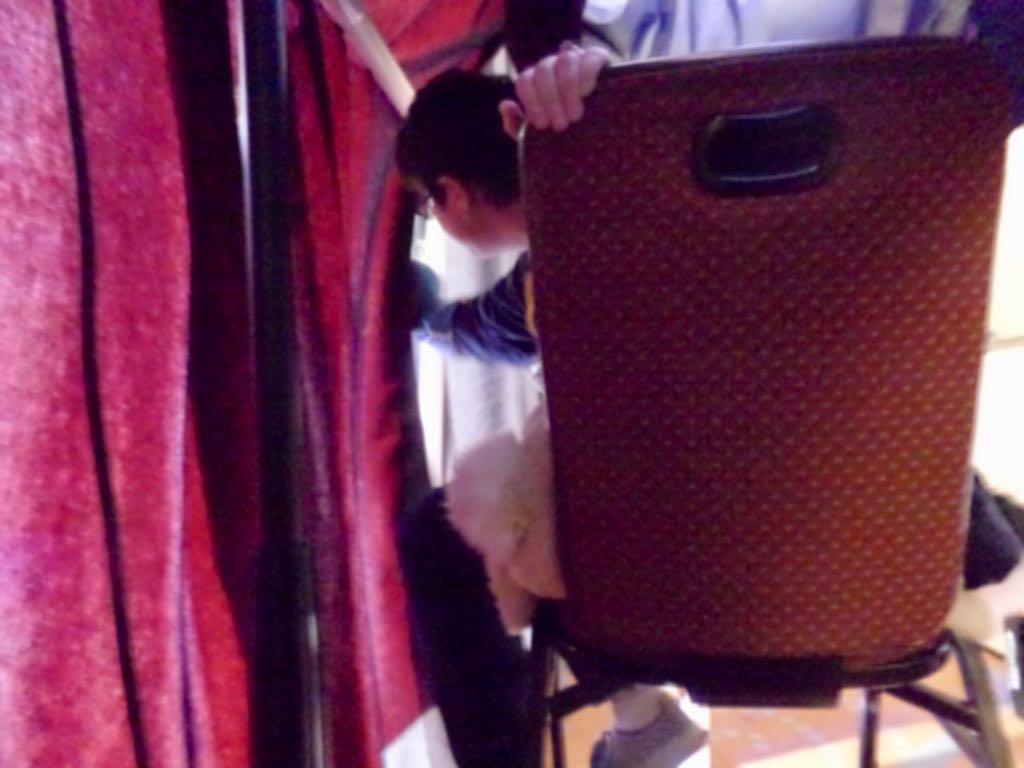 A fleeting moment of our performing careers: the only photograph worth a slice of anything from rehearsal for our puppeteering.

bunny_hugger performs Russell the peacock while trying to find somewhere to sit or stand that doesn't kill either her back, neck, or arm. Go ahead, find any element here that's in focus. The other picture is worse. 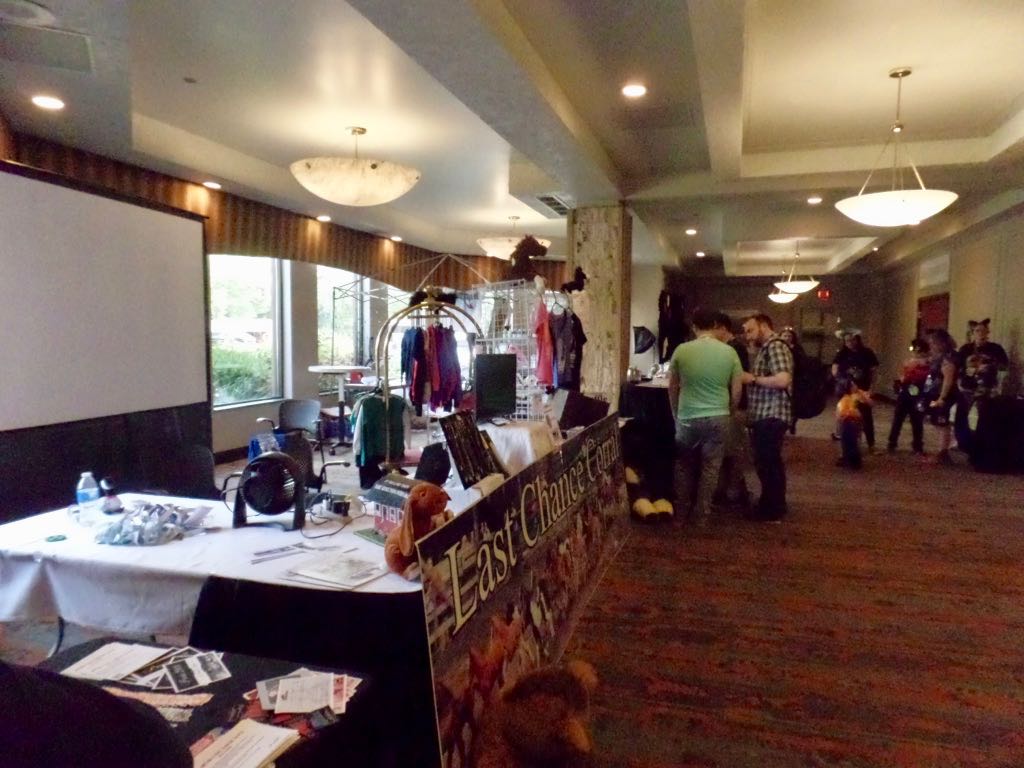 And a last look at the charity, a horse sanctuary, with its merchandise table. This was set up outside the main events room.