A choice to leave was a good one

As we hustled to the queue for our last ride on Vortex, a kid in line called over to us. ``Do you like biscuits?'' I thought: well, I'm kind of indifferent to American-style biscuits, but British-style cookies? I'm a big fan of cookies. So I said ``it depends on the kind''.

bunny_hugger agreed. The kid said, ``I'm English, biscuits are cookies!'' It amused him, and those with him. It would become his signature for much of the wait: calling out to passers-by, do they like biscuits? Many people said they didn't, only to be told that by biscuits he meant cookies. This caused many people to Kings Island to shrug and move on.

bunny_hugger confided that if we had to listen to that for an hour and a half she was going to go mad. I was sure that he wouldn't go on forever. After all, when we reached the end of the temporary queue we turned back around and there wouldn't be any new passers-by he could talk to. My reasoning was flawed, since he could ask anyone on the other half of the line, but I was right anyway. The biscuits prank lost its thrill.

The normal queue for Vortex ran along the brick wall of a lawn area, giving views of the ride and the adjacent ride, a Troika named Shake, Rattle, and Roll which was under renovation the previous time we visited the park. This was marked off by metal railings which were adequate during normal operations. And was all the queue there was when we rode at the start of the day. By the end of the day temporary queues, movable metal fencing, added a second row of spacing. (Similar metal fencing added to the queue of Antique Cars, which we assume was having its most popular year.) The queue ran past the end of that, and out into the midway, ending eventually somewhere near a fake ambulance that's part of the Halloween decorations, or maybe near the bathroom. We spent a few moment standing behind a couple people who turned out not to be in the ambiguous queue. And more people joined behind us; we wondered how they would close off the queue when 7:00 came.

The answer is they had an employee stand at the back of the queue, or what he determined the queue to be. He stood, holding the ``We're Sorry, This Ride Is Closed'' sign which ordinarily is hung across the entrance of a ride. He kept in the queue, too, moving with the people who hoped to be on the last train.

We passed several people hoping to be on the train, too. They were sitting on the inside fence, trying to casually let people pass them. They said they figured they could just sit and let people go ahead of them for as long as security didn't tell them to move, which, so far, they weren't. We wished them luck with their plan. And then a few minutes later encountered another group sitting on the fence, trying to casually hang out and make the last train. There were a couple other groups we spotted trying the same trick and we wondered how many of them could even make the last train.

Also there: a bunch of former Vortex ride operators. There was a group wearing homemade t-shirts about their being the Original, 1987-season Vortex crew. Wonderful to see them gathered again and also amazing to think that there would be such a group hanging out. I suppose that Facebook and other social media make it possible to find and gather a group like that. And people who'll run a roller coaster are, generally, roller coaster or amusement park fans and will congregate in those communities. And being a ride team seems to engender a group pride that, like, my working in a waffle cone stand at Great Adventure did not. Like, any given roller coaster ride will have team hoodies or t-shirts or such. The Original Ride Crew spotted some people with the 2009 Ride Crew shirts who were just riding, and not working the last day, and called them over to join that up. That must have been a fun group to see ride, but they were well ahead of us.

The sun set about 6:45, so we were getting practice photographing the ride at twilight and at night. Also admiring Shake, Rattle, and Roll with its new LED light package too.

bunny_hugger had just got her camera set up and aimed for a good night photo of Shake, Rattle, and Roll with Vortex running in the background when 7:00 came, and that ride shut down for the night. Its lights stayed on a few minutes longer, but the ride didn't rise up from the ground any, and was soon dark anyway.

The line was making great time, though. Vortex was running three trains, as it had at the start of the day. The ride operators were really hustling to get people belted in and restraints checked quickly. And each train carried 28 people. The Roller Coaster Database estimates its maximum capacity as 1600 riders per hour. Think how many people would have to be in a line reaching more than an hour long.

So, the line wasn't more than an hour long. Getting from the vague end of the expanded queue to its normal entrance took maybe twenty minutes. That's an incredible speed. And then, with the park closed, they didn't get any slower. We were into the little house, through which the queue wends, by 7:15. We were to the launch platform not ten minutes later. We might have had a longer wait but one of the operators called out, ``is there a two-person group? Two people who want to ride the next train?'' And

bunny_hugger, forgetting that she was trying to take a movie of the whole train arrival-unload-reload-safety check-dispatch cycle, agreed, since we always agree to that. So we missed the chance to record for our posterity things like the bell that rings as a train arrives. But we also got that sweet experience of jumping the end of the queue and legitimately.

And we took our last ride, near the back, of Vortex, in the night, with just the distant sounds of The Beast and maybe Mystic Timbers competing. Most of the park's lights were turned off, apart from just enough pathways to guide people back to the replica Eiffel Tower and the midway leading to the exits. There's an extra thrill a roller coaster gets when it feels like rapid motion in a black nothingness, and our last ride on Vortex was augmented by that thrill.

Well, to the bathroom, but still. The longest line Vortex could possibly have, and we got through it in under 45 minutes. What outstanding operations, when they had all three trains running and dispatching as fast as they possibly could.

Off the ride we had no business sticking around the park. But we waited outside, watching the even laster rides after us. Many people did. Park security didn't bother shooing anyone out for this last half-hour of the ride's public operations. (Park employees would get an hour or so of ride time, after the close of the park, but none of us were going to try sticking around for that.) We stood there watching, often taking pictures ---

bunny_hugger found places she could rest her camera to make it take sharp enough night photographs --- and watching the queue disappear. As the last people disappeared into the building we got wondering which train would be the last, and would we know it when it launched. And how close the people hiding in line got to their goal of being some of the 28 on the final train.

The last several rides got celebratory, people on the train and onlookers hooting at each other as the train came to is braking area. The crowd chanting ``One! More! Year!'' People angling to see if it looked like anyone was left in the station. My camera, overworked for the day, declaring it had run out of battery. And then, finally, the final train, which we knew from seeing the dispatch of an empty train while another was in the middle of the course.

And the train moved from the braking area into the station, and let the last (public) passengers go, and they joined the crowd to tell about what it was like to be on the last ride of Vortex.

Soon after security said something that I didn't catch, but about how, you know, they have to clean the park up. And we all dispersed, without really breaking up, just all moving at our own paces back to the front of the park, and home.

bunny_hugger and I paused near the Eiffel Tower, one of the few things still it, featuring a tent of light strands around that we squeezed some last pictures out of our camera for. Also I went off to the floral calendar, to get a dismal but passable night photograph of it showing off ``Kings Island - Oct 31'', which was not the date. I don't know if they set it to be the 31st just for the last weekend or if that's done for the whole of Halloweekends at Kings Island.

And that was our visit. We packed things up, got as comfortable as possible, and made the long drive back home, stopping at a couple Speedways for snacks instead of a proper meal. We arrived home somewhere around 2 am and found Sunshine in good order, maybe confused about her long weekend alone but not at all badly off for it. The goldfish were in good shape too. We could get to bed comfortable and thinking, you know, we could do overnight trips like this to Kings Island for the Christmas season too, when they open again in late November.

Of course, this would not really be sensible.

Trivia: William Wallace, assigned by Reuters to cover the Anglo-Egyptian conquest of Niger and Sudan in 1896, was required to file a daily bulletin of fifty words, with the instruction to send an immediate short message if ``any very important fighting'' occured. Source: The Power of News: The History of Reuters, Donald Read.

PS: Advertising and Linear Regression, a headsup to an interesting essay and mentioning why it's got some mathematical content. 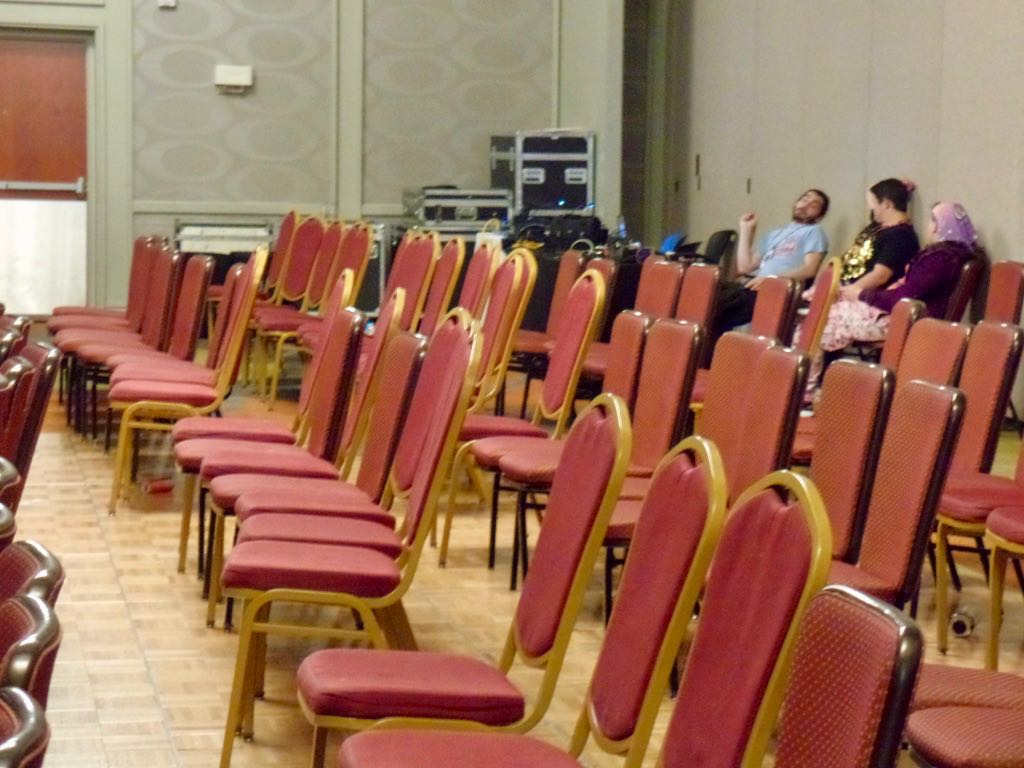 Anthrohio closes down early. Here it's so quiet there's just, like, humans left over. 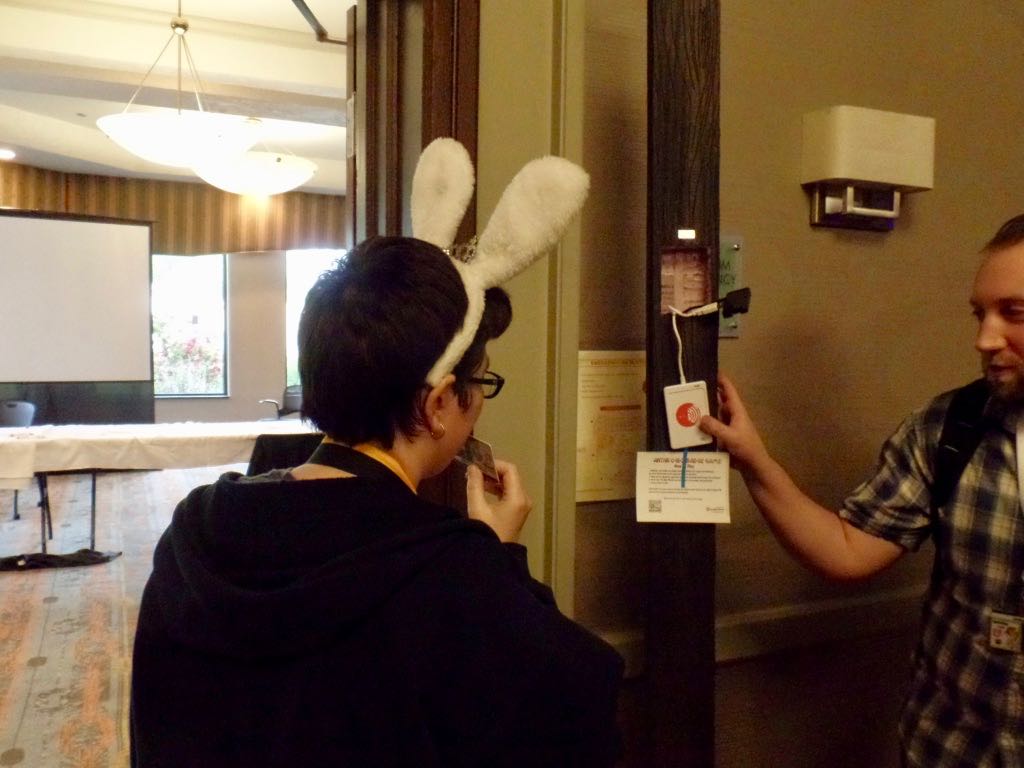 Somebody reattaching one of the RFID scanners so

bunny_hugger can snag a final achievement. 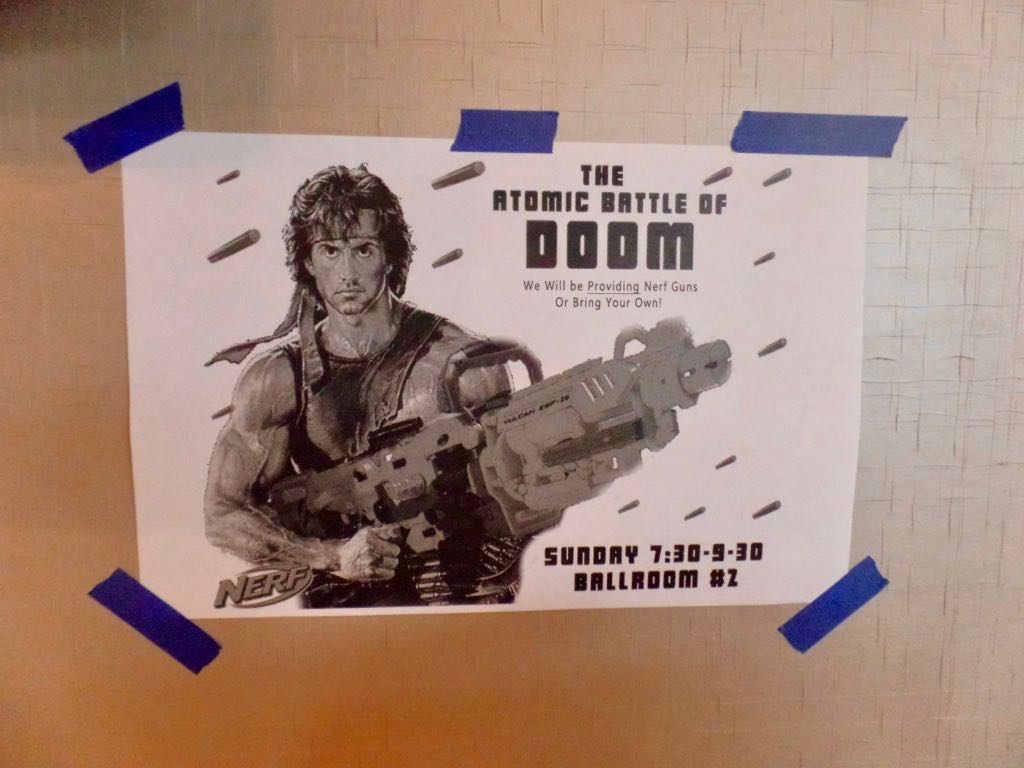 A re-emergence! With the change from Morphicon to Anthrohio nearly all of the old traditions were changed, for example, the great Nerf battle at the end of the con being renamed the Foam Flinging Frenzy. Here, though, someone remembers the old name.