The places I remember where my picture comes undone

So a moment of home life. We have a bathmat that covers a little gap between Sunshine's throw rug and the rabbit hutch. We had one there originally back when Stephen was losing control; it's stayed there because we don't want the rabbits to have to deal with more wood floor than they have to.

bunny_hugger noticed the bathmat felt wet, though. Water spilled from her dish? Sunshine deciding this was where she wanted her litter bin to be? Impossible to know. But we checked and it didn't look like she had done anything that soiled the floor underneath. Sunshine drinks a lot of water, though, and has urine that's quite light and fluid, compared to the normal rabbit goo. Could be either.

In any case we figured we needed to wash the bathmat, and to put some puppy pads underneath the mat's location, to protect the floor incase she was peeing. I fiddled with the pen, closing Sunshine off from the bathmat, and set that in the wash.

While I was downstairs

bunny_hugger called: something amazing was happening. Sunshine was angry. I'd heard her thumps; but it went farther than that. She was running around her pen, gathering her fur and bits of hay and all. She stood there with bundles growing out of her cheeks, looking like she was doing some Martin van Beuren cosplay. She was nesting, just like an expectant mother rabbit in the wild.

Of course she's not expectant; she can't. But we had no idea she still had enough hormones to feel such a seasonal urge still. We knew she was feistier, and more prone to biting, in autum, based on how she acted last year. But nesting too? We felt awful for her, running around agitated, rushing to put together a home for the rabbit kits some part of her is preparing for. So we put another bathmat down, while her proper one finished cleaning. She rushed around, rolling up bundles of fur and tucking them away. Many of them into her hutch. This probably felt like a more secure place, given the disruption of her preferred nest. We also got to wondering, given the size of the bundles of fur she was making, whether she thought those might be baby rabbits, or decoys for baby rabbits.

Well, she's got her proper bathmat back. And now we understand that it isn't just the place she likes hanging out so. It's her Nest, and she wants that to be hers. It's easier now to understand why she gets so defensive when we stand in that area, which unfortunately is the best place to go to take care of some pet care stuff, including interacting with our mouse. She is using the inside of her hutch more, possibly figuring that she's best having a secondary and more inaccessible nest just in case.

After such a long time taking care of Stephen, and then our short times with Columbo and Penelope, I thought I understood the basic moods and needs of rabbits. It turns out that a young female rabbit, even neutered, has needs that I didn't anticipate. I know a little better now, though.

Trivia: Apollo 12's injection into lunar orbit was a main engine burn of almost six minutes, followed by a circularizing burn about five hours later. Source: Where No Man Has Gone Before: A History of NASA's Apollo Lunar Expeditions, William David Compton.

PS: Exploiting My A-To-Z Archives: Vector, bringing up one of those things that you always learn from a specific example and that turns out to be way more abstract and universal than that.

PPS: Let me then balance this Sunshine attention with some pictures of Penelope in our bedroom. 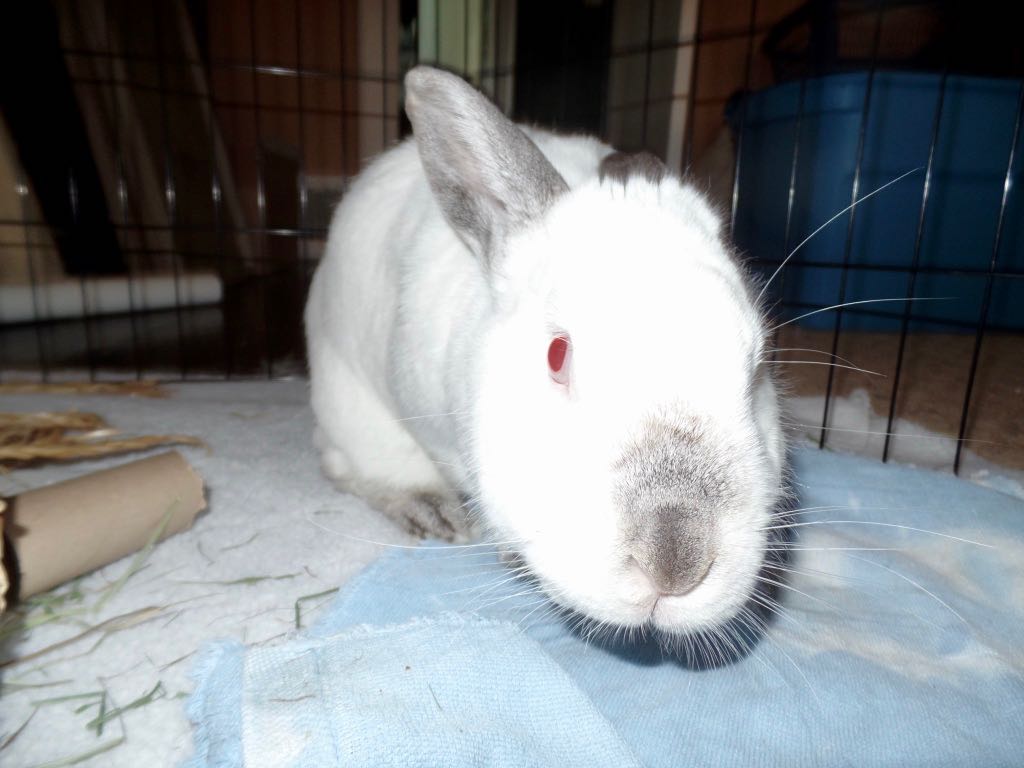 So we had concluded the only way to keep both Penelope and Sunshine content was to separate them, and we set Penelope up in our bedroom. Here, she's getting the chance to explore and disapprove of her new digs. 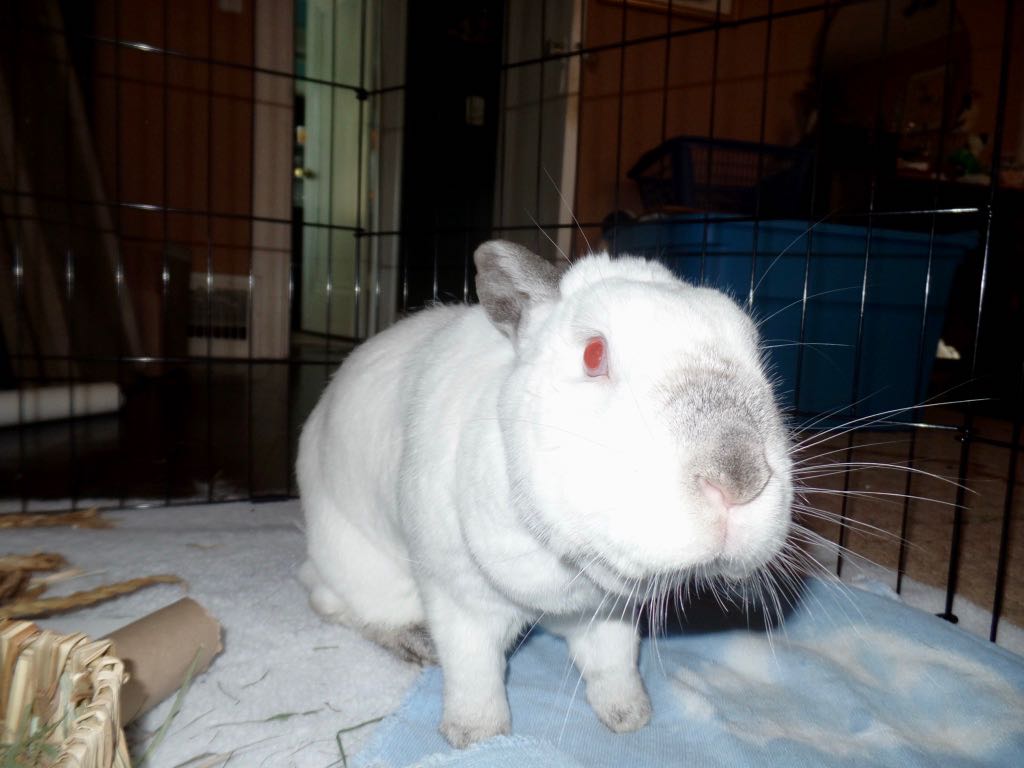 She might not be sure what to make of the new location, but she did seem to like that there was not another rabbit there. And, if she could have understood, she'd surely have liked that in the summer this was the one room in the house that's air conditioned. 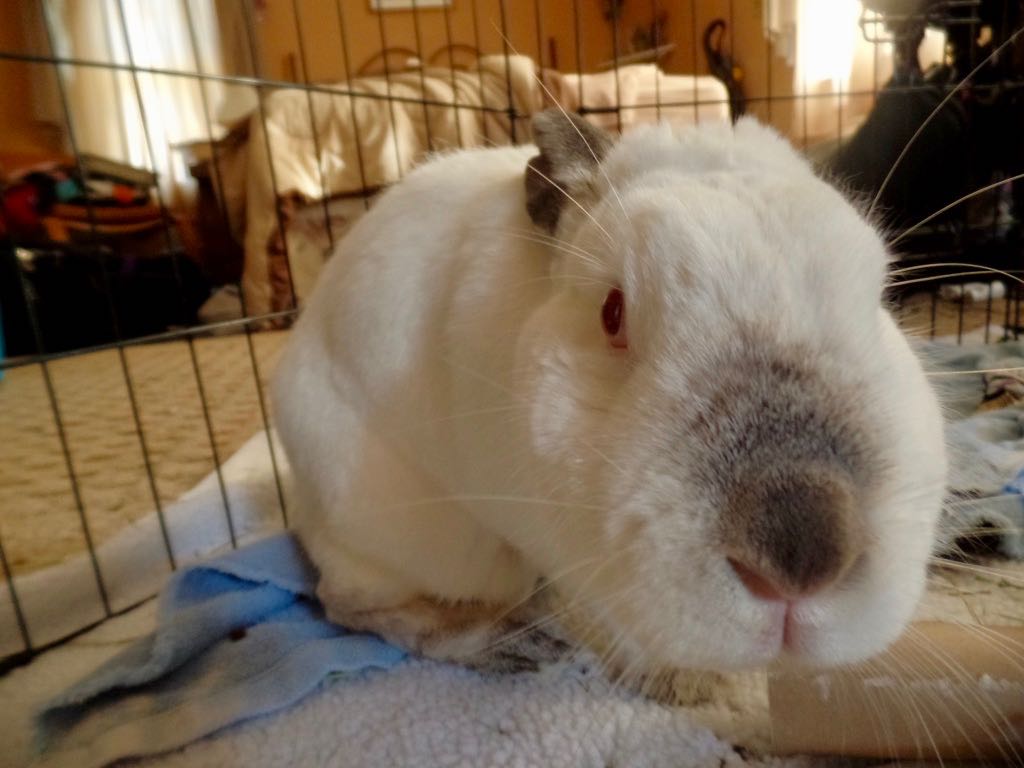 Here, she's more or less all right with the new place and would like to know why I keep shoving a camera into her face. But look at that nice smudged nose and oh, those hindpaws; so cute, huh?