Don't be tricked by what you see; you got two ways to go

The fourth, and traditionally worst-attended, of

bunny_hugger's quarterly charity pinball tournaments is Fear and Trembling. We weren't able to set it the Wednesday before Halloween. It had to be the Wednesday after, incidentally the day after

bunny_hugger's birthday and election day. The last time this was the day after Election Day we had an absolute bottom attendance, three people. But that was the day after the 2016 election when it was so hard to think of anything not miserable. This time around we'd get a dozen people, which is low, but all right.

The format is pin-golf, in which the goal is not to score points but rather to reach some objective in as few balls as possible. Often stuff like start a particular multiball, or get a particular mode going. The Fear and Trembling twist --- well, it's based on a quote from Kierkegaarde about how we make all our decisions in fear and trembling about the responsibility. Here, and so far as we can tell uniquely, you get two objectives, and have to decide before you start which one you're going for. If you make the other one along the way, too bad, it doesn't count. There's a lot of chances to kick yourself for choosing badly.

So in what free time we had between, like, MB's Halloween party and the Kings Island run and Fremont and pumpkin-carving and all, we made a couple trips to our hipster bar and looked over tables and possible objectives. I think we got an excellent set, too. The one that I am proudest of was for The Simpsons Pinball Party. One of the objectives: light an extra ball. This is great because you can do it by having a simple steady hand: shoot the right ramp nine times and you light it. You don't even have to shoot it nine times in a row. Or ... you can do it by having a terrible first and second ball, in which case the game, having pity on a player having a lousy time, lights an extra ball. So anyone picking this had a second choice. Try to earn it in skill, which could get you a coveted hole-in-one. Or try to earn it in lack of skill, an all-but-guaranteed three.

We worried, as ever, about the pin-golf objectives. They're hard to land. You want objectives to be challenging, but it's crazy frustrating to have an objective you can't make. It's also the rare format where it does not matter if you tilt, so players will get pretty harsh on the tables. But then, we remembered the rule someone on pinball group Tiltforums offered about pin-golf objectives: there is no such thing as too easy a pin-golf objective. Indeed, if the objective were just ``launch the ball into play once'' there would still be people who failed at it. Pin-golf is magical that way.

bunny_hugger picked the light-an-extra-ball objective on Simpsons. She chose to play it the safe way, plunging and hitting nothing significant the first two balls. What she did do was hit the skill shot first ball, and put up about 700,000 points. Which, apparently, is good enough to keep the pity extra ball from lighting. She fumed, and got down to the right-ramp-nine-times approach, which she ... got close to finishing, but didn't. Infuriating.

Which is how much of the night went. MWS started out playing some tables so badly that he gave up and restarted, a thing that you can just do in pin-golf, for an extra donation to the charity.

bunny_hugger did not make finals, a bother but at least something that made it easier for her to scorekeep the finals. I also did not make finals, with many of the objectives that I had picked and had no trouble doing in one or two balls just days before proving to be impossible now.

The odds-on favorite to win was AJR, making his first appearance at one of our events since the Jurassic Park launch party. He, having come in third at Pinburgh, should have no trouble meeting basic objectives which all amount to have enough control and rules knowledge. I did see on his card, though .. there was at least one objective he failed entirely to reach. Still, he did win the tournament and the largest of the trophies.

Fear and Trembling wasn't the only thing going on. The bar had also gotten in Stern's newest game, Elvira's House of Horrors, or as autocomplete keeps wanting to make it, Elvira's House of Parliament, and wouldn't that be a delight? In the past we've done launch parties by playing a set of games with a simliar theme to the launched game, and making playoffs from that. This time, with Fear and Trembling going on? We did the most basic kind of launch party: everyone plays the launched game up to twice, and the highest scoring people get into playoffs for the plaque. Basic and even a little boring but there was no way to do something more involved the same night as Fear and Trembling, and we did not want to commit to yet another tournament.

In his first round of playoffs AJR put up a grand-champion score on the first ball of Elvira, so outclassing his opponents as to make their play almost futile. In the second and deciding round, though? ... He just had an adequate game, one that DMC managed to come from way behind on to win. It was a heck of a comeback and thrilling to watch.

After the tournament and photographs and all were done DMC started to joke about AJR, who's still rather young, and about whether he was even allowed into the bar like this. AJR replied with an ``OK, Boomer,'' the first time I've seen that in the wild. And better, DMC had no idea what he was talking about so asked why everybody was laughing. I thought he was doing a bit. Anyway this lead to some talk about such generation spread as there is in the league and local people. I pointed out, everyone could tell that I was Gen X, because nobody asked about me.

It all ended up being a rather long night, and it was disheartening that neither of us did well in either tournament. But it's hard to run a tournament and do well in it, and people were still quite happy with

Trivia: Apollo 12's lunar module, Intrepid, landed about 535 feet from its target of the Surveyor 3 space probe. The probe was behind the back of the lunar module, where there were no windows. Source: Where No Man Has Gone Before: A History of NASA's Apollo Lunar Expeditions, William David Compton.

PS: Reading the Comics, November 13, 2019: I Could Have Posted This Wednesday Edition that's so much about calculating π.

PPS: Let's peek around more at Marvin's. It's easy to take interesting photographs here since all you have to do is photograph in any direction, ever. 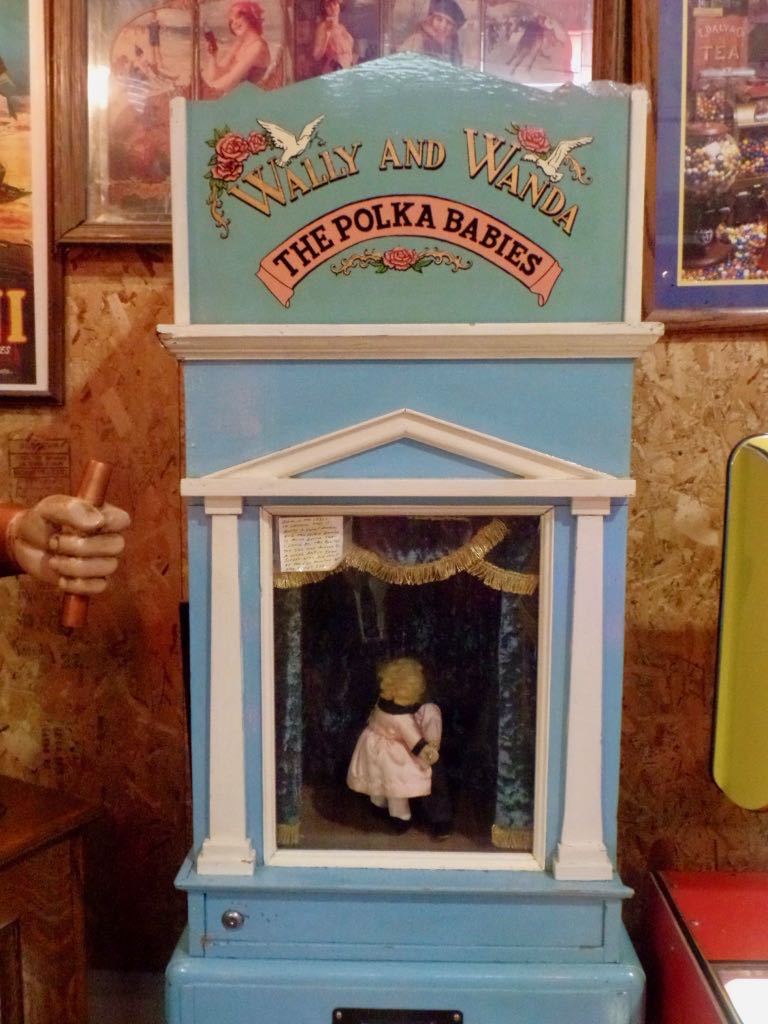 Wally and Wanda, the Polka Babies: a marionette coin-op that has a couple figures dance around while the music lasts. 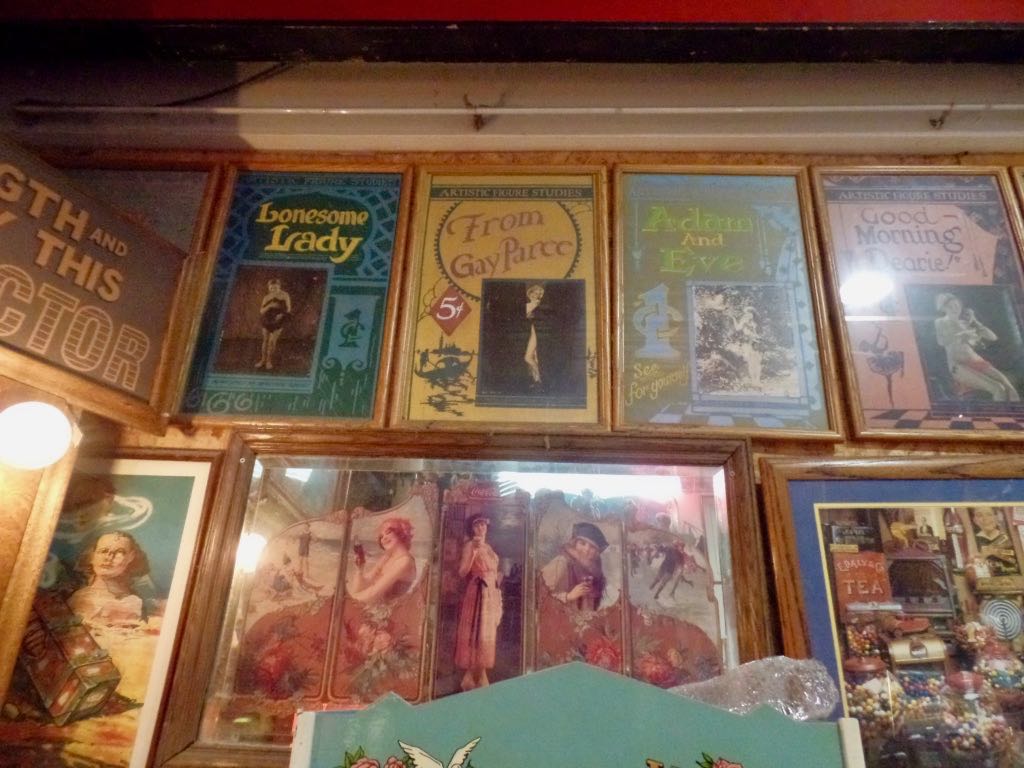 Posters for nickeloden-style movies that Marvin's doesn't actually have, but that sure seem like they ought to have available. 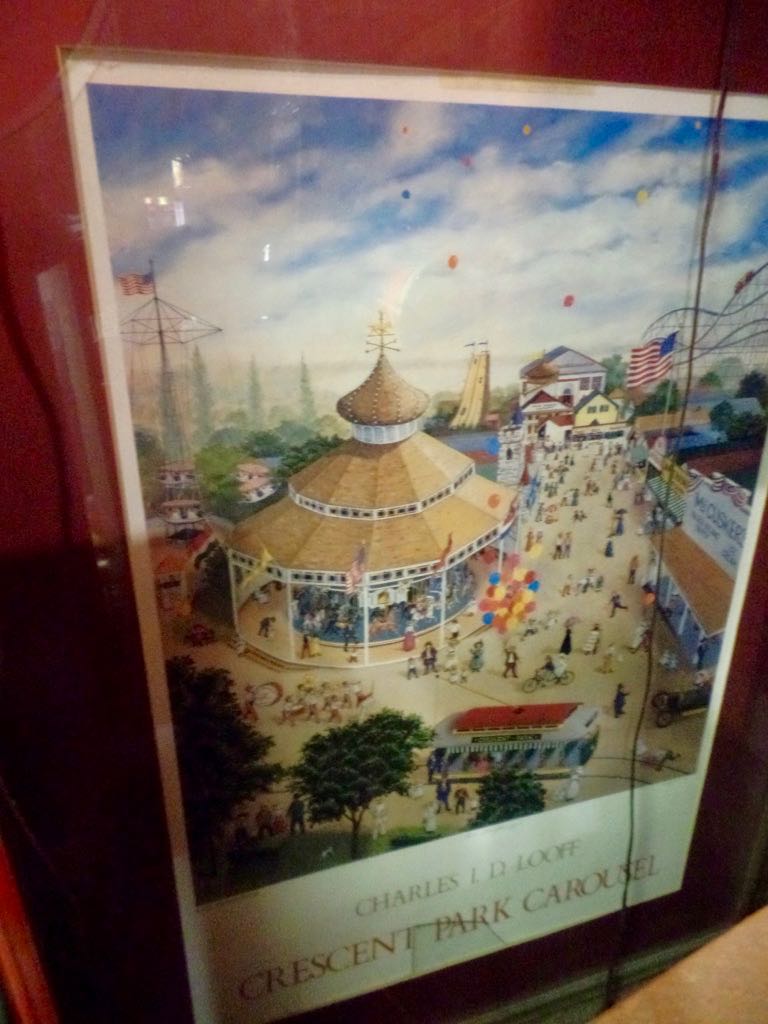 And a poster that Marvin's has for, what else, the Crescent Park Carousel in Riverside, Rhode Island. Which is one of those things we'd like to get to, if we had a good stretch of time in New England amusement park and related things again. The carousel was built in 1895.