What has become a tradition for

bunny_hugger's birthday is a trip to Bronner's Christmas Wonderland, in Frankenmuth. We had wanted to go the day before her birthday, but didn't have time: she needed to work. The day of her birthday was a work day. The day after we had the Fear and Trembling tournament. The next day she was at work; the day after that, she had to go up to school to give a colloquium. Saturday was a pinball tournament at MJS's legendary polebarn. We thought maybe the Monday after her birthday would be a chance to go. But the day was forecast to be a heavy snowstorm. So we changed to Sunday instead. We know Sundays to be heavy days at Bronner's but what was the alternative?

There's a tv-viewing area in the entrance lobby which, previous Sundays we've visited, was showing football. Today it was showing a Bronner's video explaining the place and its history. It had a smaller than usual group of people sitting and watching.

We went without any particular things we had to get. We'd have liked some kind of ornament celebrating our new mouse. Bronner's has many ornaments celebrating people's pets, including a lot of dog breeds somehow exclusing Basset hounds. But they don't have anything to celebrate someone who loves their mouse. ... But that's maybe all right, as we still haven't decided finally on the name for our mouse. We didn't have anything particular to get customized, although we were tempted. CST surprised all of us by getting married just the day before, explaining his absence from MJS's polebarn tournament. We thought we might get him some ornament, something customizable, but we realized we didn't know a good pick. A family ornament would be great, but we didn't know if his wife had any children, or what their names were, to be represented.

There were some nice new ornaments, including some featuring the raccoon from Rudolph, the Red-Nosed Reindeer, and yes there's a raccoon in there. They also had a great Stitch in a devil costume. And a very nicely stylized statue of Scar, with the hyenas arrayed on his back, like secondary figures on a carousel animal. Gorgeous although not something we needed more than a picture of.

Much of what we did was look at things. If you follow

bunny_hugger's annual Advent Calendar opening on her journal you know of the famous Franken-calendar. This was an advent calendar made up of elements of older advent calendars, smashed up and photoshopped together, for a picture that makes sense as long as you do not look at three elements simultaneously. We found another such Franken-calendar, but we saved that one for a later year.

Bronner's has stuff for more than Christmas, including a pretty deep Halloween section. It's starting to get Day of the Dead ornaments in also, including an ornament of a gingerbread man with skeleton, for best confusion. There's also a handful of Thanksgiving ornaments, but fewer than you would think.

bunny_hugger thought long and hard about a shiny turkey ornament and was deciding against it, on the grounds there wasn't anywhere to hang it. I pointed out we have a couple of ornament stands that she could use and oh, yes. This could be a dangerous realization.

bunny_hugger did get one of the carousels, although one she'd spotted at I'm going to say the Noah's Ark section rather than the carousel section.

Overall we got relatively only a few things, compared to past years. It was a great day out, though. We went from Bronner's up to Cheese Haus, where we loaded up with even more tubs of cheese spread. We're still eating down what we got at Cheese Haven that impossibly packed Halloweekends day, mind you. Since we shared a basket

bunny_hugger ended up accidentally paying for my cheese spreads too, which is a bit of a rotten thing to do on her birthday trip. It wasn't intentional. It'll all balance out, though. Over there we ran across a box for Käsekuchen, labelled entirely in German. We could follow the instructions well enough to know we mix this with Eier, Butter oder Margarine, Magerquark, and Milch. We couldn't work out what Magerquark was and nothing on the box gave us a hint. It's a kind of cheese.

We had planned to eat in Frankenmuth. But we overheard people talking about how the storm was arriving sooner than expected. The weather was getting coler, and raining, and threatening to get worse. We decided to not eat in town, and to hurry home instead. ... Not quite hurry so much, though, as we knew a White Castle along the way home, and could stop there for Impossible Sliders. Also, shortly after this, something weird happened with my satellite navigator's cable; it got excessively hot and

bunny_hugger yanked it out before something could burn out for good. I'll need to do something about that sometime.

The snow came Monday, sooner and more than anyone expected; what we figured to be about two minutes was more like five and a half inches here, and more than that out by Frankenmuth. We could have avoided a very packed day had we stuck to going Monday, but not driving through that.

Trivia: Pete Conrad was about five feet six inches tall. The final leg on the Yankee Clipper landing module's ladder was about two and a half feet above the landing pad. Source: Where No Man Has Gone Before: A History of NASA's Apollo Lunar Expeditions, William David Compton.

Currently Reading: Vegetarian America: A History, Karen Iacobbo, Michael Iacobbo. Karen Iacobbo's author's biography says she's an Adjunct Professor of English so I admire her ability to find the time and energy to write a book without dying.

PS: My 2019 Mathematics A To Z: Wallis Products, an infinitely long multiplication with a value that you already know.

PPS: Marvin's has a happy number of mechanical contraptions. Let's see some of them. 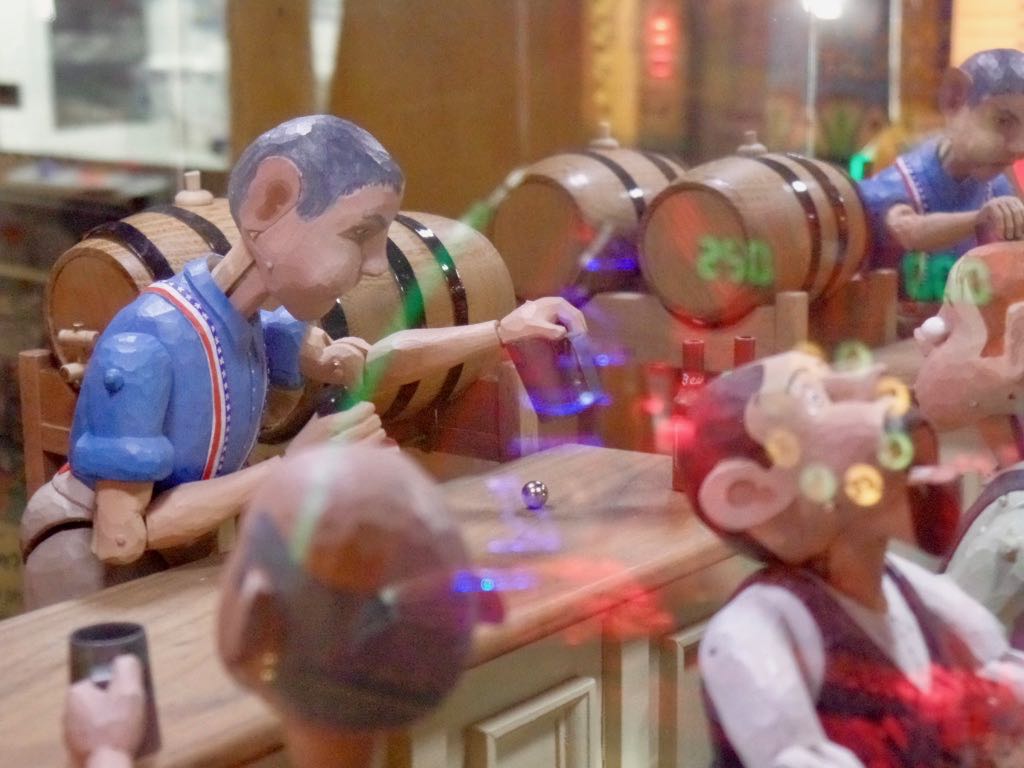 Close-up of one of the many automata at Marvin's, this one a bar scene. 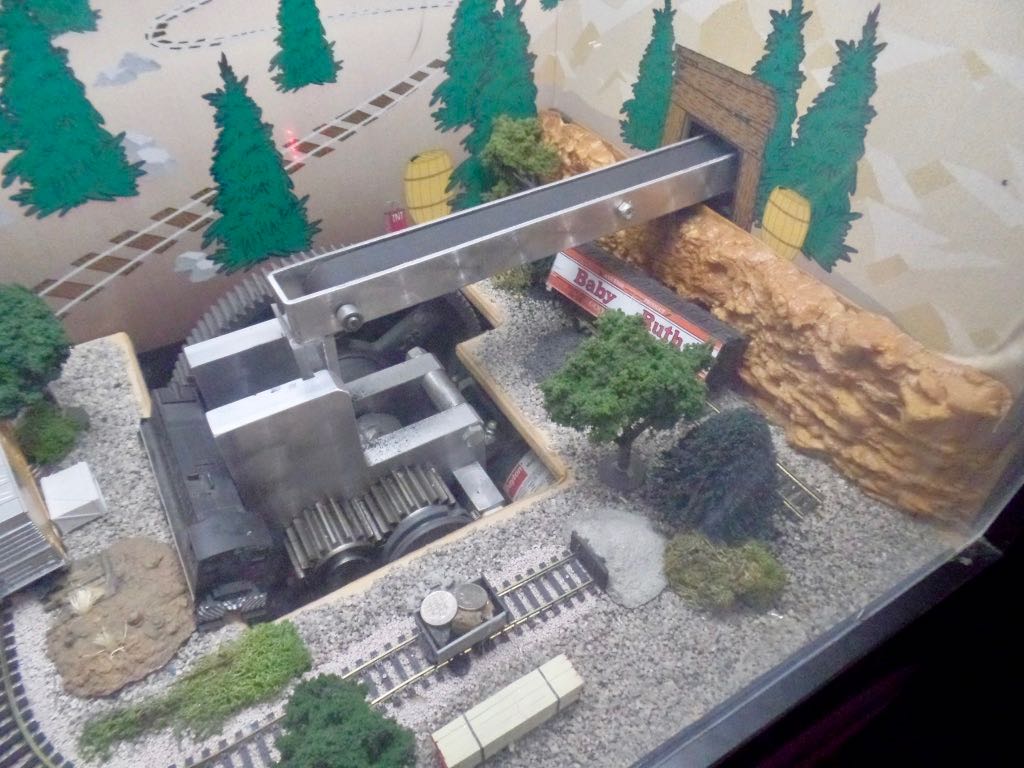 Another automata, this one showing a model railroad ... Baby Ruth ... mine? All right. 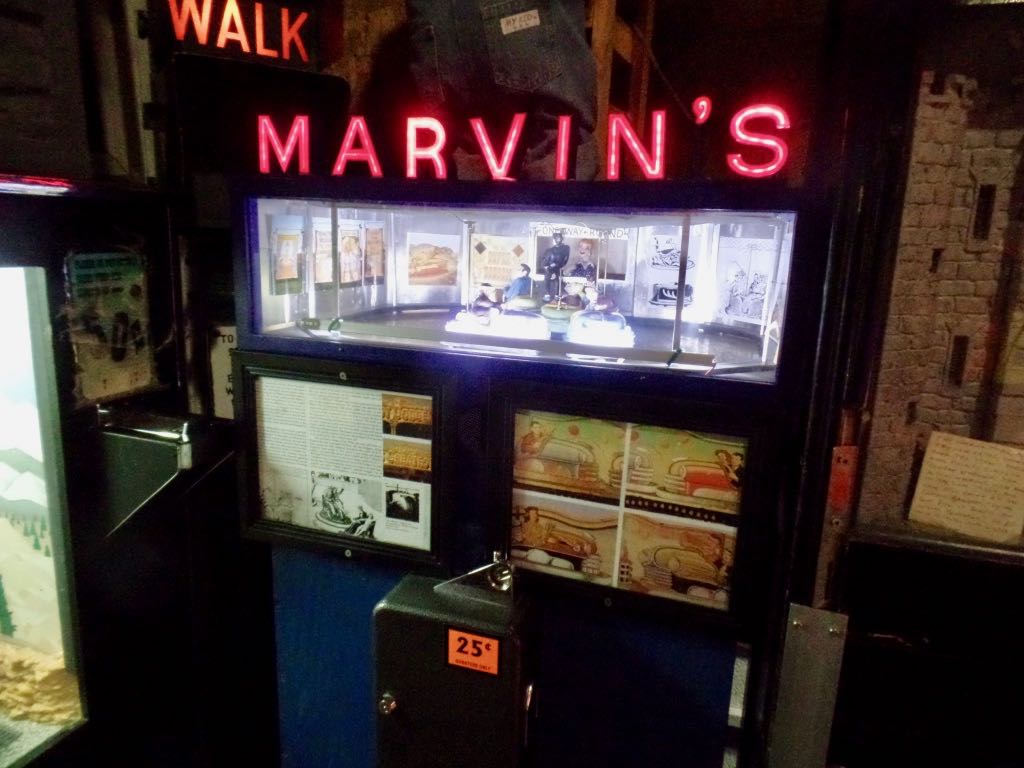