One more day before the storm

In the long lazy summer yellowjackets are just some of the many insects you mistake for bees. As fall sets in their diet changes. They need more sugar, now. We perceive this as their turning nasty. But it's more that they're desperate to survive, when the time to be ready is shrinking.

Michigan, having a huge competitive pinball scene, has 24 slots for people to make the State Championship Series. Any person's twenty best-scoring events in the state that year count for ranking within the state. It used to be all events counted, but people complained, and got the result they wanted: women players have been sunk in the rankings. The changes have hurt me, also; I'm the top second-tier player in the state, managing pretty-good-but-not-great finishes in events often enough.

bunny_hugger plays more consistently decently, but gets fewer pretty-good finishes, and that badly hurts her standings. A couple good finishes in the points mines of Fremont left me securely in the top 24.

bunny_hugger, though, was dangling just below that threshold, in if some people choose not to play, or play in other states, but not in her own accord. There are two months of pinball events left. Five high-value events in Fremont. Lansing League finals, helpful with a strong finish. Fear and Trembling, which we did nothing good in. MJS's polebarn event.

Fremont first. There were two tournaments on the first Saturday of the month, the October Monthly and the October League.

The League tournament, worth a little more, was also held all on the older games, electromechanical and early-solid-state games. Fast-playing ones, and also ones prone to infuriating house balls. I kept having rounds that started out dismal. And then something wondrous happened: somebody would pick Surf Champ. This is an electromechanical with a serious tendency to houseball everyone ... yet ... every round, when it came up, I would put in this clutch performance that gave me a first-place finish, and just enough points to go on to the next round. And in, mercifully, other groups,

bunny_hugger was having an even better time; she would get through handily. And we didn't have to face each other ... not until the final round.

But hey! A final four finish for her. That's exactly what she hoped for, and just what she needed to get from somewhere around 28th-to-30th back into 24th. That round had some drama also. On Blue Chip, a single-player electromechanical, AJH forgot that a tilt ends the game and finished with a terrible score, one that everyone playing could easily beat. I played second.

bunny_hugger played third. As she prefers to do on single-player electromechanicals she did not want to know what scores she had to beat, so I didn't reveal. This game has a beautiful, soothing simplicity: light a spinner, shoot a spinner, and shoot a spinner again. When you find the rhythm? It's perfect. She found the rhythm and had a magnificent game, with a score getting to around 500,000 points. At this I leaned over and quietly said to the other person in our quartet, ``She's going to kill me.''

Because, yeah, she had a game that would win most any group she played in except that I had put up 600,000, nearly my highest score ever on it. She mock-kicked my shin. ... Well, I pointed out, she could make it up on the other games. And then our round finished off on Mystic, on which you either have house balls or great games, and

bunny_hugger had house balls, and I had a great game. Not enough to win the game, but enough that --- with the Blue Chip finish --- I ... finished first. It's my first win in a Fremont tournament, and one of my few first-place finishes ever. I cheered, ``Yay! I can retire!''

bunny_hugger finished fourth, which was just as she had hoped and would most likely get her into the top 24, although not leave her secure for the year, not with the rush of final events, not with everyone on the margins struggling to get in.

Ah, but, there was another tournament. The Monthly, worth a little less but still quite valuable, especially with a top-four finish. And featuring modern games. For one of my rounds I was able to do what's becoming my signature combo: play on X-Men, a game that I have had inexplicably good luck on, for one win. And then play Johnny Mnemonic for a game that I finish with a compelling win --- or, if AJH is in the group, get second-place while he has a devastating win --- to seal the deal. Unfortunately this fell apart in the second round. I ended up the Monthly in eighth place for a marginal improvement in my standings. Not enough Surf Champ.

bunny_hugger, though? She kept having really solid finishes. This included a round in which she beat both JB and SAL, people who get into her head and foil her. She pulled out lousy starts on games like Spider-Man to really solid finishes. She got all the way to the final four on that, too. More: up to the last game of the round, she was in contention to win first place. AJH finally beat her, picking a game --- Guns N Roses --- whose rules he knew and

bunny_hugger didn't. I know some of them, but not enough to give her a chance.

So she finished second. But it was two final-four finishes in the two tournaments, launching her to about 22nd in the state. She's not secure yet, but she can now play to hold position rather than to gain it, much less stressful.

I have to say approximately for our positions. The Monthly tournament has posted to the International Flipper Pinball Association, so I can check just what that was good for. The League has for reasons unknown to me not yet posted. But when it does

bunny_hugger should jump from her current 24th to either 22nd or 23rd; it's hard to forecast just what. Me, I'll jump from my 14th to 13th. There is a very large gap in points between me (97.39 as I write this) and the person in 12th (PH, at 124.01). That first-place will likely get me around fifteen points. It's not impossible that, like, strong finishes at the three remaining Fremont events might make up that gap, but I wouldn't bet on it. I'll likely finish the year in the 13-to-16 range.

This was the first of the high-value pinball events of the month so far.

Trivia: Surveyor III was the only human artifact encountered in lunar exploration. Source: Where No Man Has Gone Before: A History of NASA's Apollo Lunar Expeditions, William David Compton.

PS: A Geometry Thing That's Left Me Unsettled, if you need something to go ``huh'' and ``wait, how does that even make sense?'' about.

PPS: More things you can put money into at Marvin's. 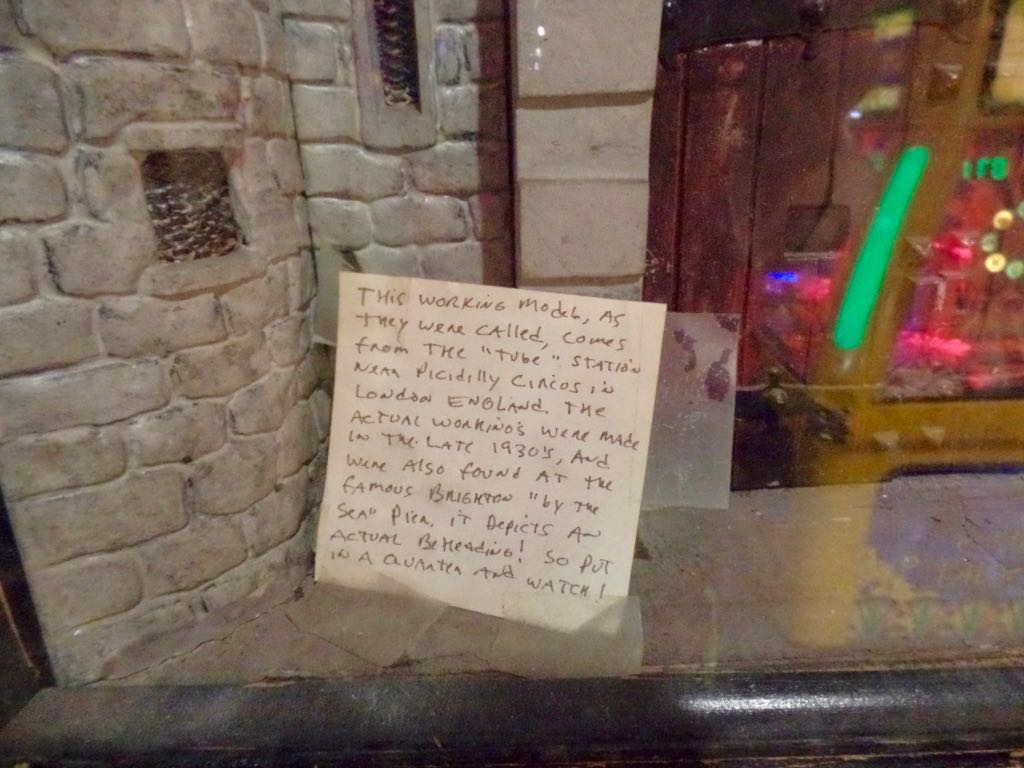 One of the rare, but much-needed, signs explaining one of the attractions. If we can accept this sign as accurate --- and there is a natural problem doing so --- hey, it's a thing that spent time at Brighton, which is great. And what is it? 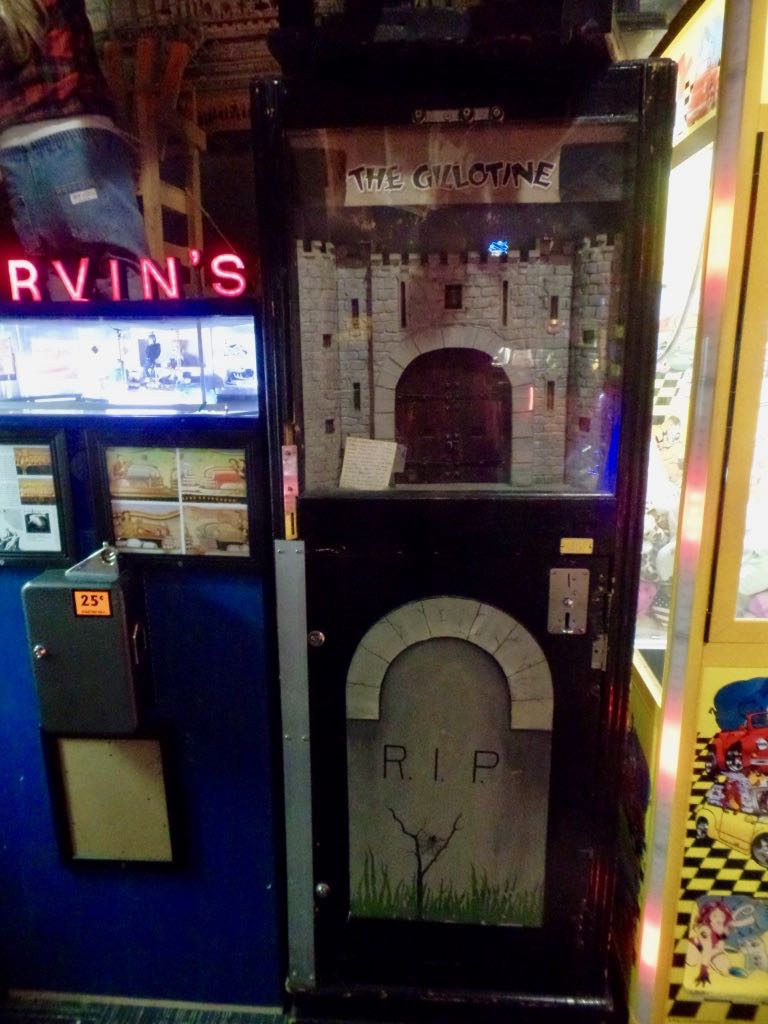 Oh, it's The Gillotine! [sic] I'm not sure we've caught it working, though. 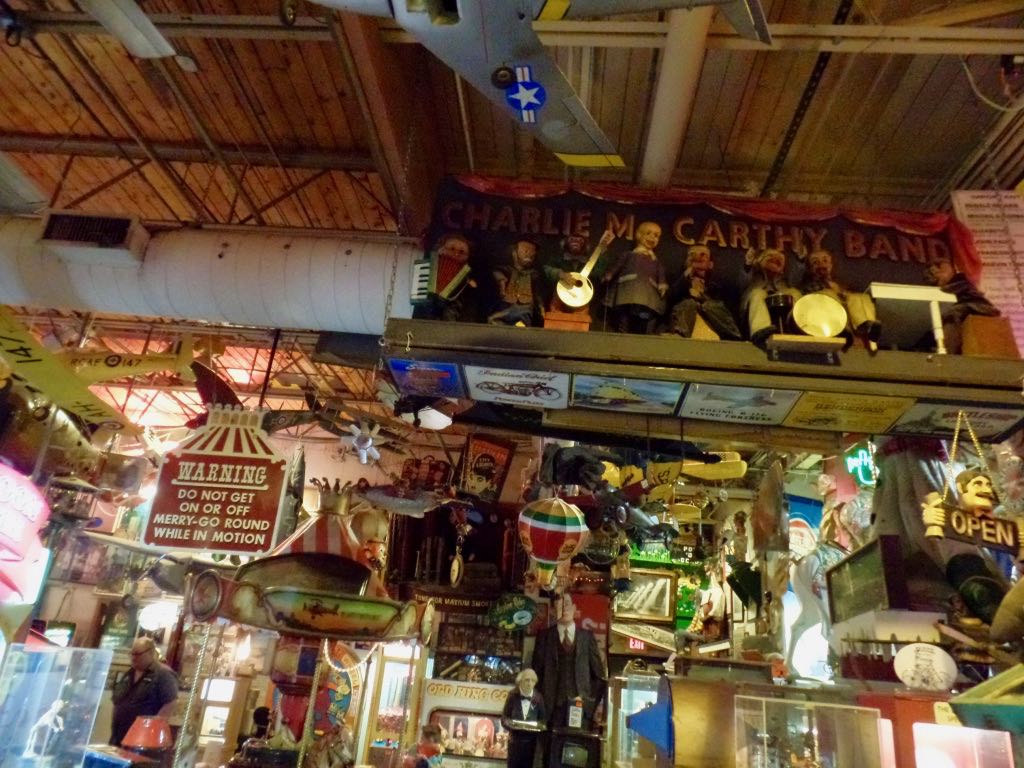 Another picture of just looking generally up at Marvin's. ... Yes, that's the Charlie McCarthy Band, for the reasons.

Posts from This Journal “fremont” Tag