When our ranks begin to form

And then the next weekend came a strikes tournament at MJS's polebarn. He usually has a November tournament (and he's just announced the New Year's Eve tournament, so we know our plans too). Match play, groups of four (or, for a few tables, three) people playing head-to-head. 38 people signed up altogether. Any finish in the top ten would advance someone substantially. Mix of modern and solid-state and electromechanical games. Lot of electromechanical games, a relative strength for me and

And a side tournament: guess the total number of working pinballs in all the games in the room. A modern game may have five or six balls that can in principle go into play. And any game may have captive balls, pinballs confined to a track that serve as targets. (The ball has to be hit hard enough that it sails along the track to hit another target.) The tiebreaker: count the total number of scoring reels on ``all the machines''. I got the number of balls strikingly close, guessing 157 when there were 155 (I think). For scoring reels, there were (I think) 147 and I guessed 142, as I forgot about the scoring reels in a shooting gallery machine and a ring-toss simulator.

For the actual play? I started off on Galaxy, an early-solid-state that I really know how to play. I put up an awful game, missing last place only by GRV rage-tilting his own lousy ball. (GRV is prone to rage-tilting, so a surprisingly reliable way to win against him is to just trust that he has a bad ball and overreacts.) This gives me two strikes. Next game, Jungle Princess, of my famous Pinburgh Finals tiebreaker. I put up maybe the worst game of my life on it and take three strikes. I manage comebacks, with wins, the next two games, and then a last place to make sure I don't get any good recovery. The whole day is like that: a last place finish followed by two first-places, followed by a last. The first place finishes are sweet; several times I manage to come from far behind in last place, just by dint of not losing the ball for long enough. My last game, Metallica, is a right mess the first two balls and I have to do this yet again. I focus really hard on getting any multiball started, and using that to work on readying other multiballs. It's a tough strategy. But through it I manage to come from last place to ... last place, but by only only a slim margin. My opponents, including MWS and JB, applaud what shouldn't have been failure.

bunny_hugger starts stronger. Not with a win, but she was playing AJR and a win would be a lot to ask for. But a second-place. She repeats this the second game and the third, before finally having a win. She's one of the top players and if she keeps to a pace of about one strike per round she'll be in the top quarter; plausibly, final four. Then she has a disastrous game on Spider-Man, not that she plays badly but that she's playing AJR, AND, and ADM. AND and AJR are past state champions; AJR is probably going to be state champion this January. Spider-Man is a game designed for state champion-grade players to play forever; this game goes on so long that it's taken out of the tournament afterwards. She loses and feels humiliated by her loss, but, c'mon. This is like getting into a guitar-playing contest with the Beatles. She has a third-place finish next round, and then a second-place finish, which is still keeping her in pretty good shape. But then she comes in last on Road Show, first on Cyclopes, and then gets the worst possible news. She's to play Banzai Run, a game with all the points in this difficult-to-play vertical backglass playfield. And against me, a player who always gets in her head. She finishes third (I finish a distant last). She has some recovery, taking a second place on Jungle Princess, before going up on Whirlwind, a game that gives out house balls like candy. The only thing that'll save her is if opponent GRV rage-tilts, and he doesn't. She's knocked out, the same round as I am, tied with me for our finish. We finish the vast tie for 23rd, earning not enough to move anything.

It's a rough finish; we'd have needed to go about six more rounds to get into the really choice top quarter of the finishes, and the kinds of scores that could move us. They would have, though; first place earned 24.14 points, enough to vault me into 12th place, or

But this would be the second really good chance in November, so far, to get a state championship position reasonably secure.

Trivia: Apollo 12's lunar module ascent stage was crashed into the lunar surface about 76 kilometers south-southeast of the original landing site, at a speed of about 1.67 kilometers per second. Source: Where No Man Has Gone Before: A History of NASA's Apollo Lunar Expeditions, William David Compton.

PS: Exploiting my A-to-Z Archives: Wlog, one of those nearly omnipresent mathematics terms.

PPS: Hey, how about getting away from the place we go every month for pinball and go instead to ... a place we go only very certain months for pinball? I thought you'd like that. 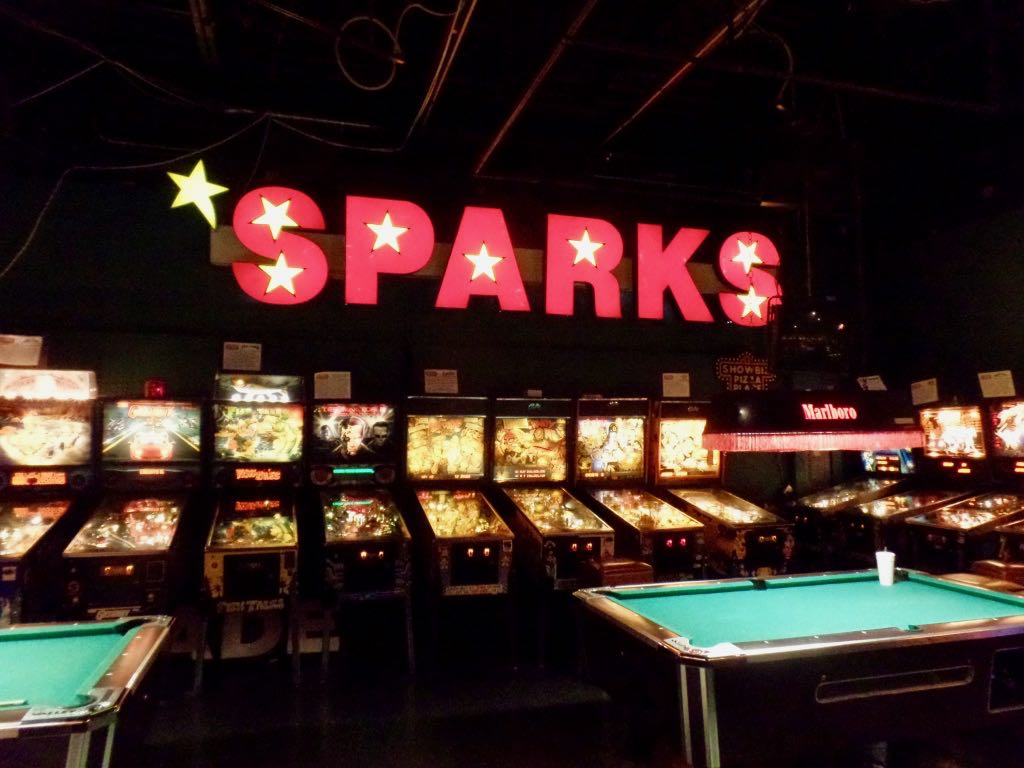 And so here's a picture of the Sparks Pinball Museum, in Chesterfield, the points mine far out on the east side of Michigan. They only have a couple tournaments per year that we can get to. It's got about fifty tables, nearly all of them 80s and 90s, just our speed. Plus, hey, who doesn't appreciate naming their pinball things after the band behind Angst In My Pants and Let The Monkey Drive? 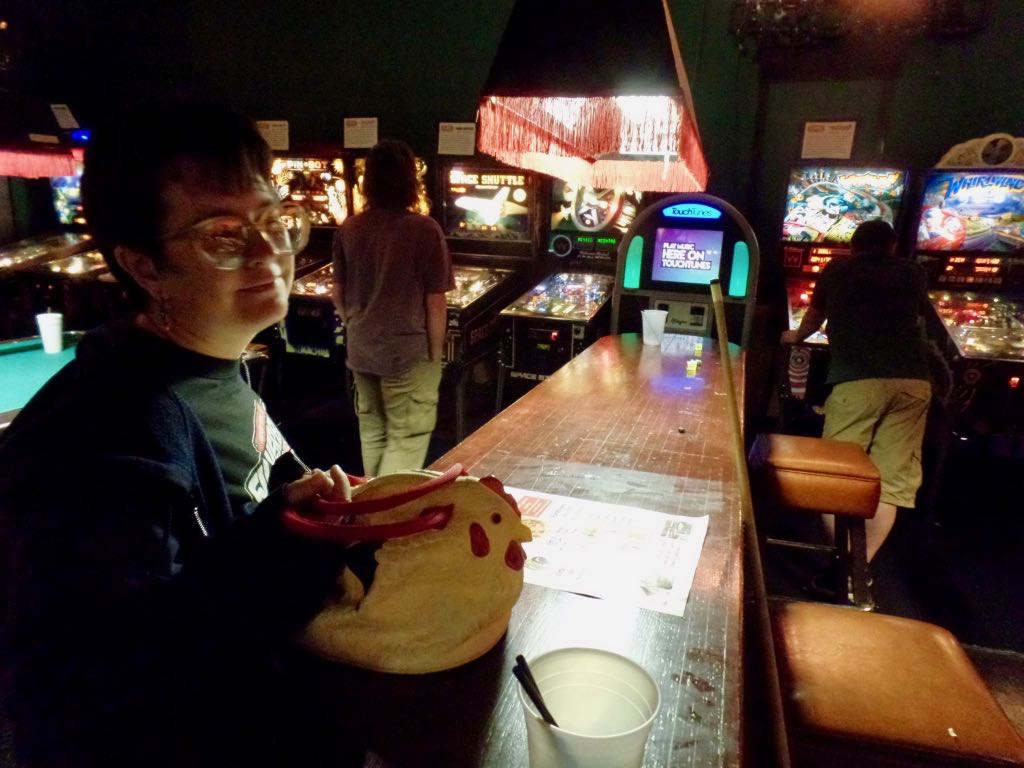 There is one bad thing about Sparks. Do you see it in this picture? Yes, it's the jukebox here. The volume on this thing is set to 6.5 on the Richter Scale, so that all the games that half of the arcade are impossible to hear. 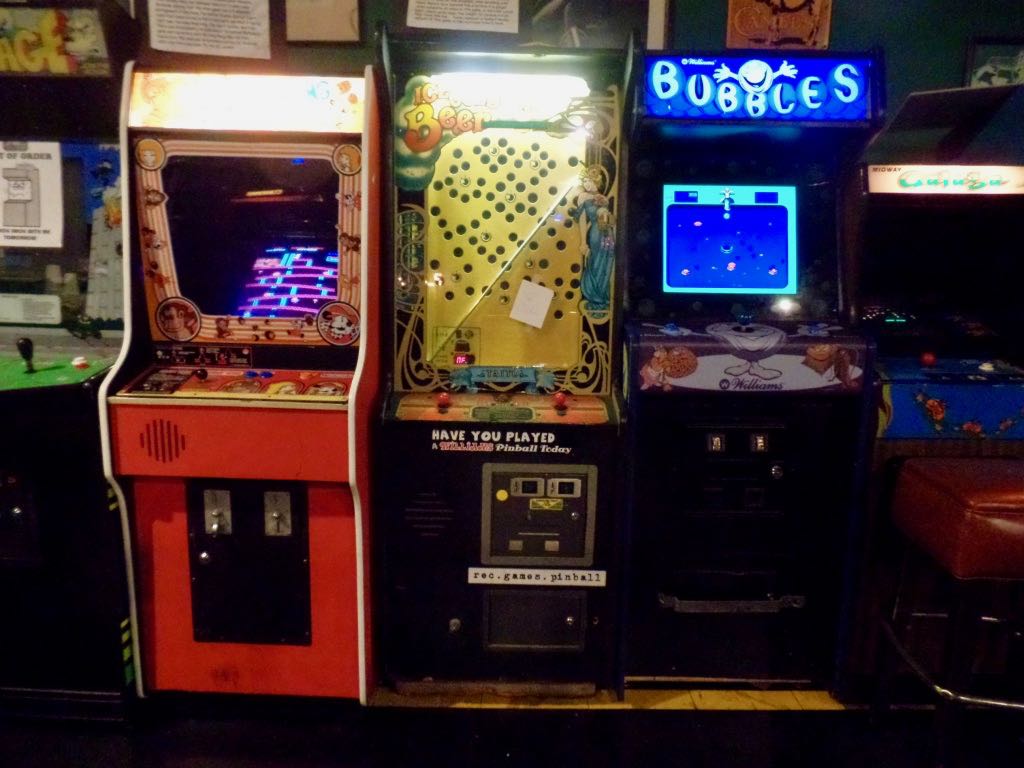 Some of the video games and a vertical ball-drop game that's part of the attractions there and hey look at that! On the coin box of Ice Cold Beer. It's a sticker for Usenet group rec.games.pinball. Yes! Usenet is totally coming back someday!