The Friday before Thanksgiving --- once upon a time, Midwest Furfest weekend --- is when Lansing holds the Silver Bells in the City festival. Once again we attended, although again without

bunny_hugger's parents, who don't care to stand in a crowd for several hours in the cold. And it was cold. While it wouldn't rain or snow or threaten to, this was the one day for a week in either direction that the temperature dropped to freezing by 6 pm. We did our best to dress for it, heavy socks (in my case, double socks) and warm boots, but by the end of the night my toes were numb regardless.

We keep meaning to set out earlier each year, and we did get out a bit earlier than average. This let us completely skip the traffic jam going to the parking lot by the Lansing City Market. Also maybe a factor: the Lansing City Market closed after a decade-plus of bleeding out shops and money. Last year they still had a bar, and used the space as somewhere for Santa to hold court and eventrunners to give out cookies. This year the bar finally closed (the city had to kick them out in one of those legal proceedings that just seems weird), and Santa was set up by the convention hall, and they gave out cookies and cider at the City Hall.

And for all our getting there a couple minutes earlier we still missed the chance to stand right up by the fence. For the first hour of the parade my view was obstructed by a father with his kid, whom he had stand on a garbage bin. When he set the kid up like this

bunny_hugger fretted, but I whispered that he would move. It was about an hour into the parade and events, but they did move, never coming back that I saw.

The parade was, as it's settled into being, about 75 minutes long, featuring ten high school marching bands. Three of them even met with

bunny_hugger's approval for marching in good order, and the two that she'd picked were the ones that won the thousand-dollar prizes from the judges. Also while there were a couple of songs played by more than one band, including Jingle Bell Rock, there wasn't anything played by three bands. We may have gotten past the very funny incident of a couple years ago where half the bands played Jingle Bell Rock. Also one of the Jingle Bell Rock plays was as part of a medley. There were a couple things lost from the parade that we miss. The Lions with their little biplane-model cars zipping around, for example; they didn't march this year. Nor were there any parade clowns. And the Accident Fund Insurance Building float, imitating Lansing's most Batman: The Animated Series-esque building (and here for a picture that shows the roofline), once again didn't appear. We're not sure just when it did last appear and I was thinking maybe it was the year the parade was scattered by a sudden downpour. Possibly it was damaged or worse.

The State Tree is lit at the end of the parade --- before the Community Sing, this year, for a change --- and

bunny_hugger groused about how small it was before learning that it was in fact 61 feet tall. A couple years ago the state moved the tree location to somewhere that forces them to pick smaller trees, on the grounds of Security. We did wonder what the lighting would be like; a few years ago they tried something different, a mesh of green lights with a red band that everyone mocked as making the tree look like a cigar. This year they lit it to a stunning, and bold, mesh of red lights. ... Or so we thought. It's actually color-shifting LEDs, the colors fluttering through the rainbow in these quite nice waves of change.

They had fireworks again! Last year there weren't any, with the reason given that there was some kind of scientific data-gathering going on which fireworks would mess up. That's wrapped up and the show was ... gosh, it seemed like it was lower down than in past years. We stand in about the same spot every year so it's not our perspective changing. But it did seem like everything was nearer the capitol dome than in the past. Maybe I'm fooling myself.

After the tree lighting and sing and fireworks we walked over to the Christmas Village, already running out of things and closing up shop; all that we bought was a sleeve of popcorn. Walking back to our car we stopped, of course, at this little traffic circle on which Lansing's set up a couple of giant Christmas tree balls, with snowflakes painted on them. These have been an icon of city decorating for years, and something people make juvenile jokes about for almost as long. Last year they hired Bronner's Christmas Wonderland to paint snowflakes, giving the balls a little more definition and shape. Then someone crashed their car into them. But thanks in part to a $7,000 donation the balls got the needed repairs and showed up again this year. Which might be their last: the city's trying to figure out a permanent installation to put on that circle, which would leave the balls nowhere particular to be. Well, it's a large city and they'll surely be able to find somewhere for it. None of the proposals for sculptures to put in the traffic circle permanently have been that good. But they're there now, and people were taking many photographs of them, while the season for them lasts.

Trivia: At the time of the attack on Fort Sumter, the United States Congress was scheduled to be in recess until December 1861. Source: Waging War: The Clash Between Presidents and Congress, 1776 to ISIS, David J Barron.

PPS: What was going on when we stopped in Lusty Lil's to get out of the rain? Once our cameras de-fogged? 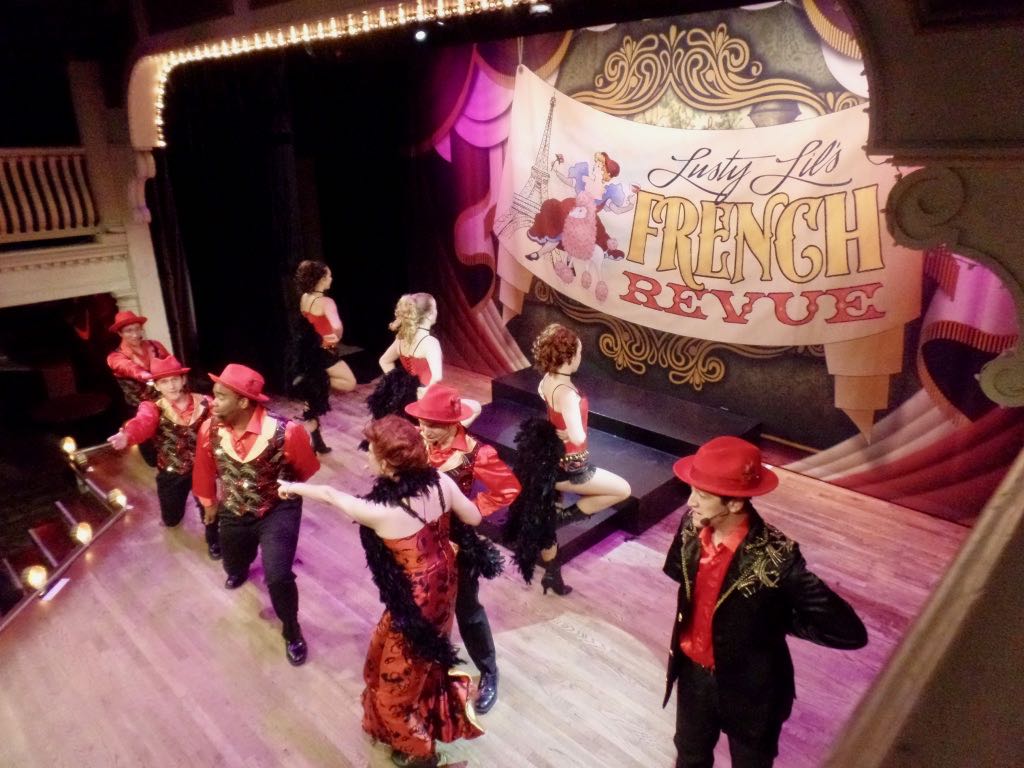 The show, Lusty Lil's French Revue, had the premise that this tiny western saloon was trying to do a classy French show, and couldn't quite get the country right, so they tried out everything in Europe before finally getting to France. 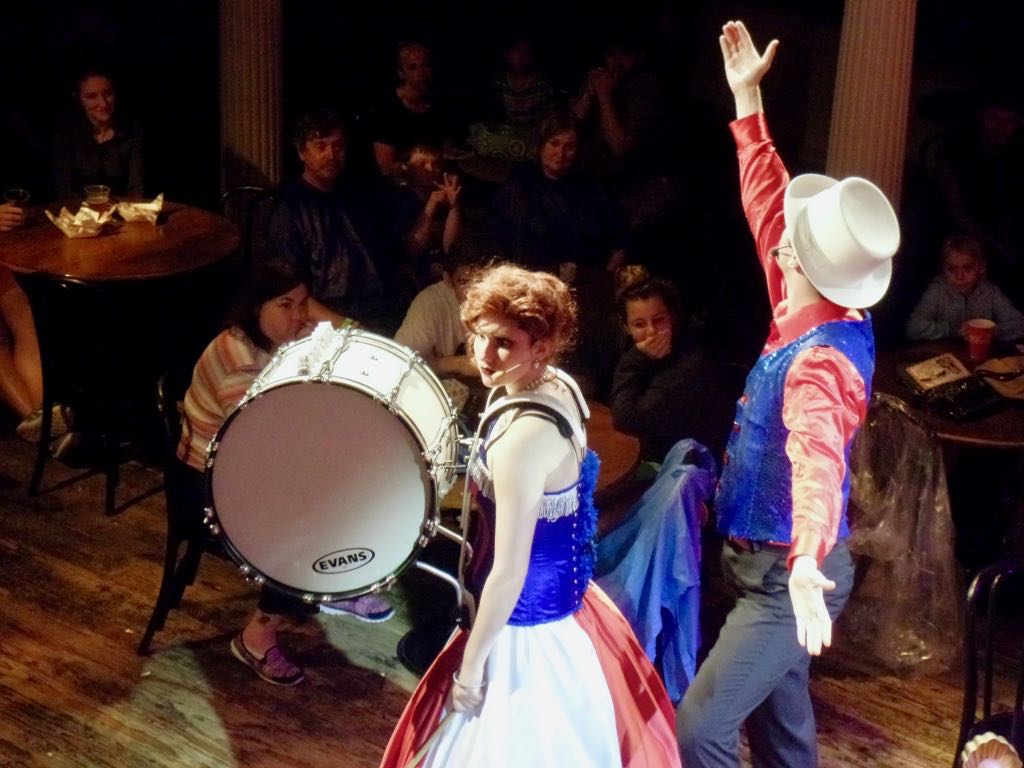 I like how the spotlight on the performers makes them stand out against the audience here. 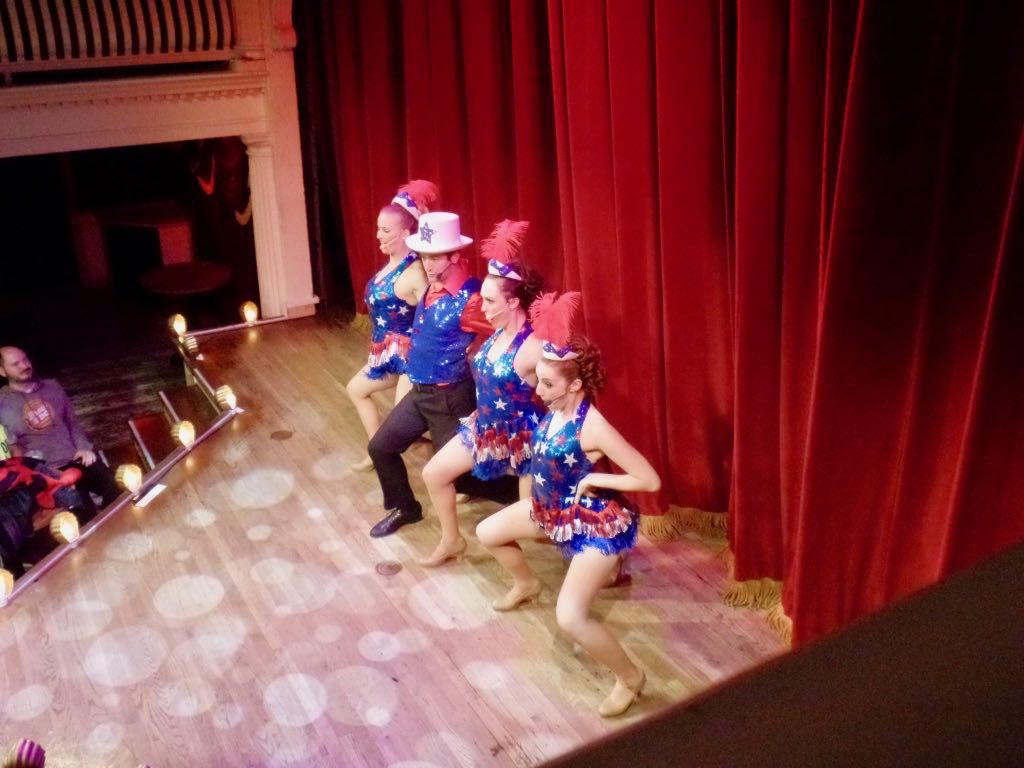 I managed to take a picture at the moment everybody dancing looked the most awkward possible!