They say it's your birthday

About two months ago MWS decided he was going to try running a pinball tournament. I don't know what exactly made him want to do this; possibly he felt he didn't have enough anxiety in his life. He chose to have his tournament at our local hipster bar, the one where Lansing League runs and where all

bunny_hugger's charity tournaments have been. There's fair reasons for this. MWS is such a regular here that you'd be forgiven for thinking he lived in Lansing, rather than Flint (which has several venues with pretty good pinball selections, although in bowling alleys which are less fun to just hang out in). The place is pretty central to the whole Michigan competitive pinball scene. It's got, now, thirty pinball games from the 90s to (mostly) the present day.

The only obnoxious thing is, y'know, was he trying to show

bunny_hugger that he could run a better tournament than she could? On her own turf? ... I don't think so; I think he wanted to try his hand at this, and somewhere he felt maximally comfortable. But I think it's also possible he wanted to see if we could hold a tournament on a Saturday. Many, many people have asked

bunny_hugger why she doesn't hold Saturday tournaments. Her answer: the bar usually has a live band performing, starting from either 9:00 or 10:00, and that will be loud and possibly crowded, spoiling the fun of a tournament. And given the bar's opening hours on a Saturday you can't guarantee most tournaments worth something would be done by the time the music starts.

MWS thought he could overcome this. He even coaxed the bar into opening a couple hours early, just for pinball players, on the promise that there'd be enough people coming to be worth their while. Yes, he went through panics that there wouldn't be enough people for it to be worth their while. But he did his best to ensure that, choosing a tournament format that everybody is comfortable with. This is progressive strikes, in which you play in three- and four-player groups until you lose enough games. And he made it a cash payout tournament: the ten dollars everyone paid to attend was put in a pot, divided up and meant to be paid out to the top eight finishers. And he talked it up at every chance for the last several months.

It was with mixed emotions that

bunny_hugger and I walked up to the bar Saturday afternoon. Certainly we wanted it to succeed. It would test whether more events could be held on weekends, and opening the bar. And maybe getting more support from the bar for pinball events. A bad turnout would dash all that, and ruin MWS. But too good a turnout would hurt

bunny_hugger, with its implicit rebuke to the way she runs tournaments. So she was not happy that when we arrived, later than we wanted, there were already 22 people signed in. The most she's ever gotten at a charity tournament was 26. In the end, 34 people would attend. What of this reflects the novelty of a new tournament series, and what reflects Saturdays being a good day, and what reflects people not being interested in

bunny_hugger's charity events, is hard to say. I'm inclined to think novelty and the advantages of Saturday, but I have only my gut to support that.

Also somewhere along the line people started congratulations MWS on his birthday. His birthday is in April. Possibly people were confusing it with people who have run tournaments at or near their birthdays, including

bunny_hugger with Fear and Trembling, or PUF with his Birthday Bash, an event so major he made up t-shirts for it. This had nothing to do with MWS's birthday, at least originally. But he was outvoted on the matter, and we sang him happy birthday and congratulated him several times over the day, so this is his birthday now and that's that.

The match play started out with my and

bunny_hugger's favorite possible outcome: we were in a group together (along with MKS, whom we know from Fremont events) and this on Metallica.

There was a consolation going on. MWS had an idea to make the sting of taking strikes less bad. With each strike you drew playing cards. The first four people to get three-of-a-kind get prizes, donated by the bar and by Pinball Pete's, who owns and operates the games.

bunny_hugger would not, in the end, win a prize from drawing cards. But she did win a random raffle award, a $10 gift certificate to Pinball Pete's, which is not bad.

For me? That first-place finish on Metallica would be my only win of the day. I'd get a third-place my next game, and then settle into a surprisingly long streak of second-place finishes. This often after I managed a really great come-from-behind that falls short of winning.

bunny_hugger had a last-place finish her next game, AC/DC, against CST, MJV, and MSS --- ferocious competition --- and then a second-place on Scared Stiff, a game she expected to win. Her next game was Batman 66, and that against JB, who's an expert in it. She tasted her loss and surely imminent elimination from the match. I said all she had to do was win, then, and what do you know but she did. By good play, yes, but also by good strategic play, using the game to get the points she needed in the end. In league finals,

bunny_hugger had played a 600-million-point game of Batman 66 that she thought was her best game ever on it, and JB went and tripled that. Now? She got at least some revenge.

She went on to frustrating finishes, coming in third place on Lord of the Rings and Jurassic Park, before getting dropped on Willy Wonka, a game she might like if she had any idea what to do with. That's all right; what she did do is win.

By now, though, she had nine strikes; eleven knocks you out. I also had nine strikes. And we were once again put in a group, head-to-head, along with MJV and past state champion ADM. The game: Junkyard. Everybody puts up a lousy first ball. MJV has a killer second ball, one launching him near ten million points, almost a sure win except that ADM is quite able to make that up. Except he doesn't. And I don't either. None of us does that much. MJV gets up to about 14 million points in the last ball. And

bunny_hugger gets multiball going, and milks it, getting up to ten million points. I do nothing; ADM does slightly less nothing. He and I are knocked out, finishing around 18th place. But

So her next match was Deadpool, against RED, DAD, and TS. Only the person who won would continue.

bunny_hugger feels no confidence at all on Deadpool. I give the best advice I can, which is, you know, play the game like you think you should, although maybe try hitting the Snikt target, which temporarily doubles all the scores, some. She even managed that. She had some good luck, with RED putting up an uncommonly poor game. But, DAD had a decent game, and in the end, she couldn't beat that. She was knocked out, part of the three-way tie for seventh place.

Which is not bad. For one, it got her a payout of $3.40 from the prize pool. (And since seventh place was a three-way tie, there were ultimately nine players getting a cash payout.) And ... well, there's no telling for sure how many IFPA points this will be worth just yet. My guess is that she should earn at least four points, though, giving her a bit of breathing room in the race for a top-24 finish in the state.

The suspense story of the night was JMA, the teenager who's already something like 150th-ranked in the world. The only reason I'm not betting on him to win state this year is that AJR, whose father owns the games it's to be played on, is also competing. AJR was not at this tournament. JMA was having an obscenely good day, though. The first nine rounds he had eight first-place finishes. He didn't take even a third-place finish until the tenth round. The night was coming down to whether CST would be able to win five matches in a row against JMA, without taking a single loss. Or before they started screening out underage people, as they do later in the evening. (We were of the understanding that, you know, as long as JMA doesn't force them to notice, like by leaving the bar and coming back in, it wouldn't be an issue, but if JMA could wrap this up soon it would make things easier.)

And then the band started. The bar's owners had told MWS that there would be entertainment starting about 9 or 10, but it would be DJs playing albums. Nothing too loud. So he didn't worry too much about that. Then they went and set up a live band and, as of course would happen, the band turned out to be playing punk, only much louder than that. When it started

bunny_hugger dug around for earplugs. She had a set for herself ... but no one else. We have earplugs in the box of Lansing League Pinball Stuff, because we've needed them when the bar decided to throw a surprise live punk band on us. But we weren't running the tournament, and we didn't take the box of supplies with us, and so ... well, we couldn't do anything. So CST didn't want to keep playing and see if he could pull out a fantastic upset. Which is such a shame, because the suspense was wonderful. We hoped it would last.

We were, after all this time playing, so much of it actively competing, tired. If it weren't for the band dropped on the tournament at the last minute, though, we might have stuck around. MWS might have too, if he didn't have to compete with a live show. Instead, though, we went home.

Does this tournament offer lessons for us, and our charity tournaments? It's hard to say. It proves that the bar could be talked into opening early. Maybe that there's people who will attend a Saturday tournament who couldn't do a weeknight one. (On the other hand we know at least one person who could not make this or any Saturday.) It also proves that however much the bar will swear they don't have a show scheduled, they'll schedule shows. And shows that will disrupt a pinball event. Although if we had brought earplugs, maybe the match would have gotten to the end anyway.

MWS was happy to have got through running such an event without major fiascos.

bunny_hugger was happy to have gotten seventh place in what's probably going to a valuable-to-the-state-championship tournament, even if, boy, just a little better finish on Deadpool could have got her possibly into the top four. I was happy that my picture of her holding up her $3.40 prize winnings was well-liked on her Facebook.

PS: My 2019 Mathematics A To Z: The Game of 'Y', which I hadn't heard of before, but really like, and maybe even someday will play. Well, maybe not that.

PPS: Peeking in at more of the show. 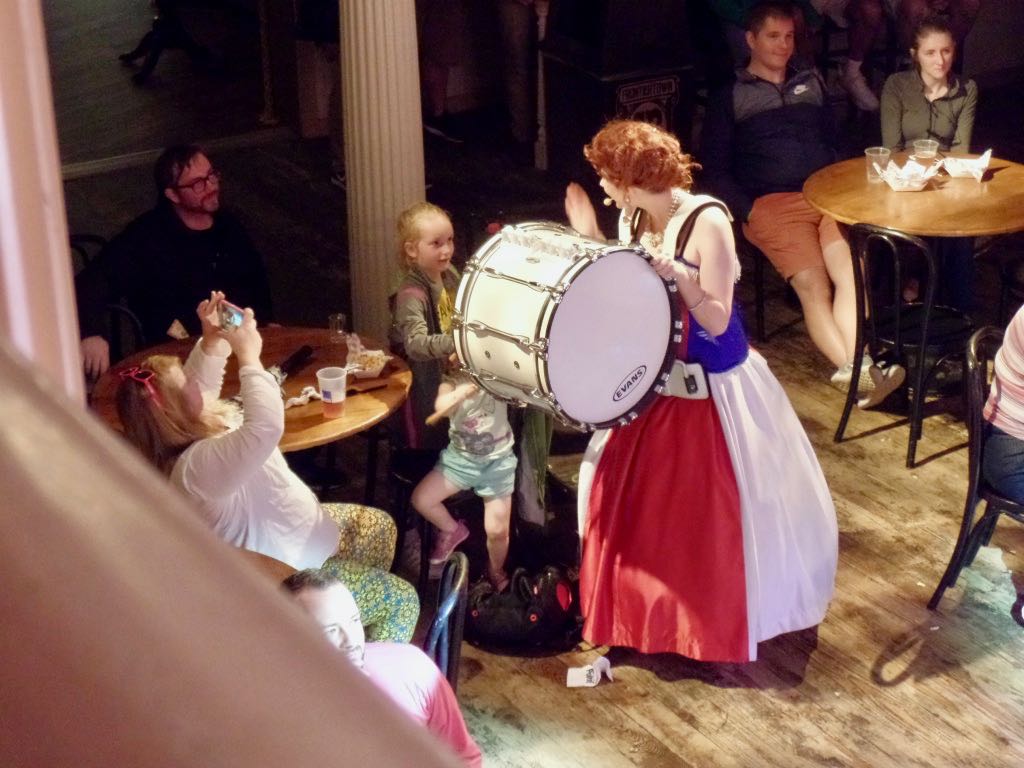 They went out into the audience several times, naturally, and here coaxed one of the kids into banging the drum. 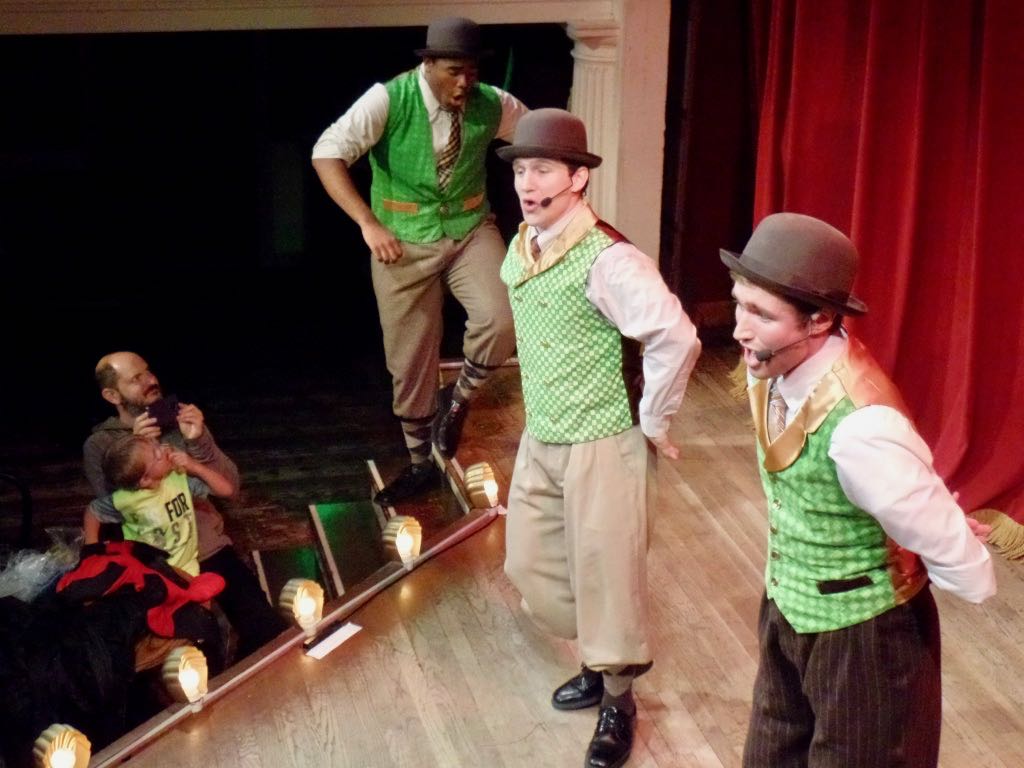 I'm not positive but I think we might have hit the Ireland part of the show. 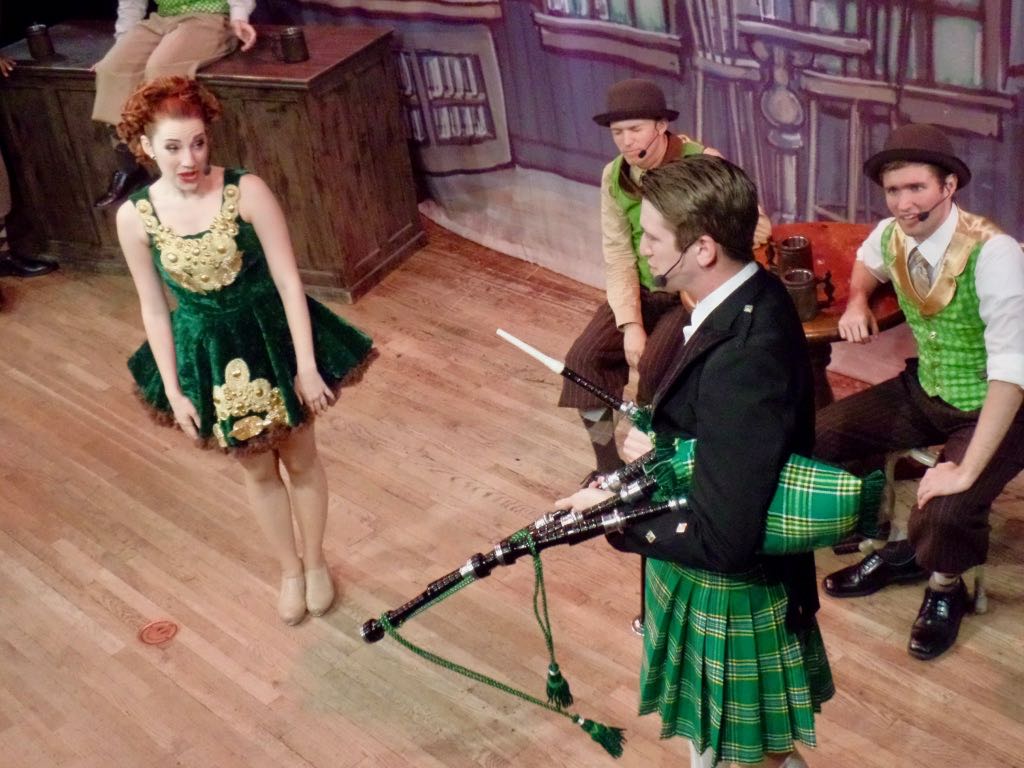 Pausing in the midst of the dance for, if I remember correctly, some cornball jokes.