Collaborations don't work; you start off deferential and strangely reverential

And just yesterday we had the final act of the 13th season of Lansing Pinball League. This was the zen tournament, also known as the split-flipper tournament. This is a match where the competitors are pairs of people, each playing only the one flipper. We went, once again, with people choosing their own teams. Long ago the league would pair people based on their season finishes, high-finish with low-finish. One year this balanced pairing did put me and

bunny_hugger together, and we won. The last couple seasons we've played as a team by choice, and haven't won.

We had overall five teams, and played a double-elimination game, each match being best two out of three. For our first match, we started out with our traditional strength: Getaway, a game recently returned to our hipster bar. The secret move there is that I shoot the ball up the left ramp. This collects a Supercharger value. Then that comes down to the left flipper, which

bunny_hugger holds up, causing the ball to roll over to the right flipper and setting me up to shoot the ramp again. This strategy worked great. Our opponents had a different strategy, getting multiball started and scoring like four times our score. The second game, we went to The Beatles, also recently returned, and a game that

bunny_hugger and I both love. We proceeded to stink up the joint and were the first team to lose a round.

Ah, but ... there's the Second Chance bracket. Here, we ... had to face the team of RED and DMC, who we had not figured would lose their first round. All right. They had seeding and picked Deadpool, which both of them are really strong on. We put up a fantastic game, though, just coming in over 100 million, which would be a pretty respectable score for either of us playing on our own. They had a rough start, but kept at it, and drained their last ball at about 92 million ... but ... their bonus. It was pretty high, and with a 4x (or something) multiplier. They ended at 101 million. I had missed our last skill shot, and yes, that would have given us a win. All right. We went to Beatles next --- or, well, they just went over to Beatles, knowing us, and we went along with their anticipation of us --- where neither of us really had a good handle on things. But when it was over, we squeaked them out on the bonus, finishing with something like 23,000 more points on games of 1.6 million (which would be a low-scoring game for Beatles for any of us). So, they took us to Iron Maiden, where we just got smashed. Part of this was bad communication: I tried to get

bunny_hugger to hold a flipper up so as to make one shot easier, but she though I was telling her to hold the flipper up at a time when it shouldn't have been, and we lost the ball. Part of this was just my fault: I thought a ball was going to roll off my flipper to hers, and it rolled to the outlane instead, sinking us. So that's that; we were out.

It did let us watch the rest of the play, though, and the most wondrous thing of zen tournaments: the teams who play just implausibly good games. Like, MWS and JB teamed up on Game of Thrones to reach a mode call Hand of the King. This is a mini-wizard mode, achieved after you've got half of all the major objectives of the game finished. I have never, not once, ever gotten there. Nor has

bunny_hugger. This pair got there by the second ball of their game. Amazing to watch. MWS and JB would end up winning the tournament, and taking home the paired trophies. MWS has now won something like five of these zen tournaments, including one with

bunny_hugger and I shouldn't team up for Zen Tournament night. It doesn't seem to be working for us. If the league will stand for it we might try random pairings of people and see if that adds some chaotic fun to things.

And a sweet moment in all this: JB had a gift for

bunny_hugger. A couple weeks ago, at the RLM tournament we were too tired to attend, he won the arcade game header plexiglass for a Pengo game. He didn't have any particular interest in the game, but knew

bunny_hugger liked it. And so he gave this to her. It's kind of like Mr Do or Dig Dug, tromping around a maze trying to avoid enemies that you can crush, in the right circumstances. It's one of her favorite early-80s arcade games, and one of the few that she's good at.

bunny_hugger looked so wonderfully surprised by the kind gesture. It's a sweet way to end the season.

Trivia: The early 20th century comic strip Archie the Amateur and Boggs the Optimist ended each strip with Boggs declaring ``Well, it might have been worse''. Source: American Cornball: A Laffopedic guide to the Formerly Funny, Christopher Miller.

PS: A Weird Kind Of Ruler, something fun I just now learned the name of.

PPS: So does Lusty Lil's French Revue ever get to doing something French? 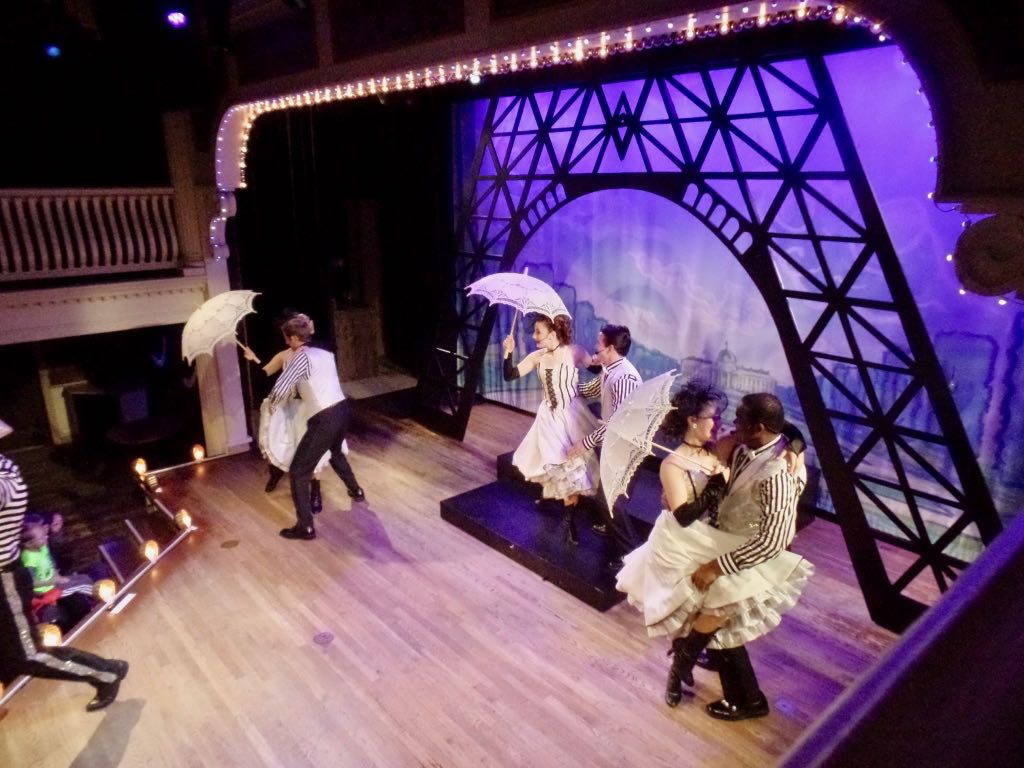 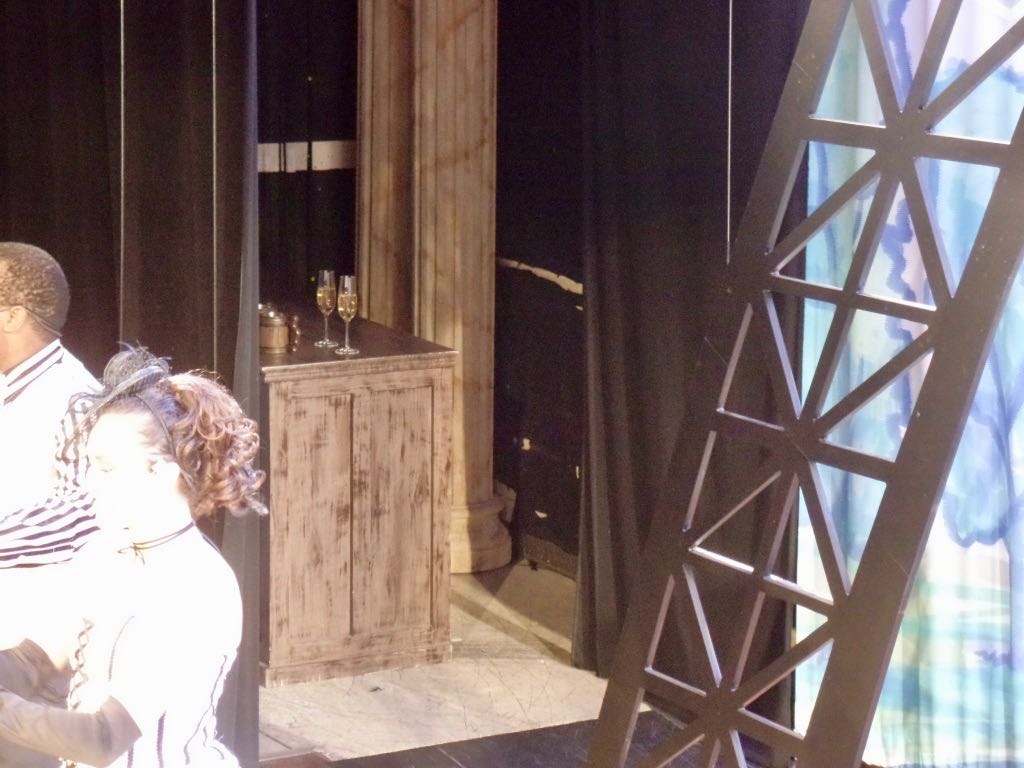 And I even had a seat where I could catch some of the prop champagne, ready to be used on-stage. 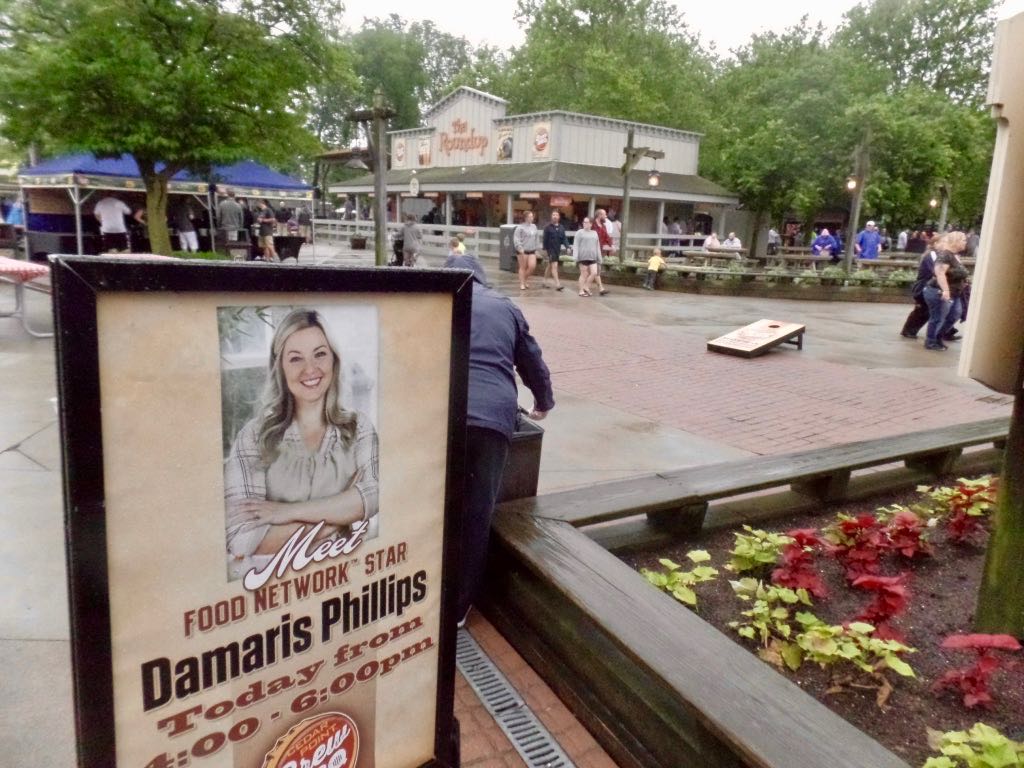 And hey, the rain's let up enough that the park is functional again! ... Also they were giving us the chance to meet ... somebody that's probably exciting if you're a Food Network watcher. I don't know.