Just be careful of the shopping carts, they're going to bring you down

We held Thanksgiving at our house this year. We might not do that again next year. Not that we were unhappy to host it, although we were running around cleaning later on Wednesday and earlier on Thursday than would have been ideal. The reason we might not do this again is that

bunny_hugger's parents had to head home early. They were worried about their dogs, left alone for too long a while. And to some extent about driving home in the dark. Getting our day, and dinner, started early is all right; it's losing the chance to just hang around with them that feels like a loss. We could go to their home for Thanksgiving instead.

We've tried to squeeze the number of things we Must Do for Thanksgiving down to a more manageable number and I'm not sure that we've quite managed it.

bunny_hugger and her mother were packed pretty tight into our small kitchen, trying to manage getting everything done roughly simultaneously. I mostly stayed out of the way, taking an excessive amount of praise for my skill in building a fire what with setting three logs on top of each other and lighting a Duraflame log under this. The important thing is we were able to watch the tv broadcast of last week's Silver Bells Electric Light Parade. We don't think we were ever visible on camera.

Also this was our first chance to show off our adopted mouse. We've found a name for him too: Fezziwig. Unfortunately the early afternoon is a time he'd prefer to be sleeping, so he would only come out a little bit to examine all this fuss.

bunny_hugger's father kept catching a bit of motion and then going over and lifting the cover off the plastic bin, sending Fezziwig off into hiding. Perhaps someday the mouse will feel comfortable with that kind of attention but he isn't there yet. As the afternoon was wrapping up I remembered having gotten toys for Sunshine and Fezziwig, for the holiday: Chinese finger traps filled with crinkle paper. Sunshine enjoyed having a thing to chew on that didn't require her to acknowledge the fire being out there. Fezziwig was delighted beyond measure to have a great bundle of papers to bring into his nest and his second nest. If we had thought of it, we'd have given him the crinkle toy much sooner, so

bunny_hugger's parents were packing up and dividing leftovers her brother called, which is otherwise welcome. But we didn't have the time to talk, and he's promised to call back sometime.

After he parents left we enjoyed some time being downstairs with all the clutter relocated, mostly upstairs. And caught on tv a couple episodes of The Simpsons that were set at Thanksgiving or had some Thanksgiving connection or, for one, did a riff on the Normal Rockwell Freedom From Want picture. It helped us remember that, wow, The Simpsons got weird since we stopped watching it.

Later we wanted to watch A Charlie Brown Thanksgiving, and took out the DVD set of 70s Peanuts Specials. And watched the whole bunch, which includes ones that entirely forget existed, such as Play It Again, Charlie Brown. Also that you forget go deeply bonkers. For example, when There's No Time For Love, Charlie Brown, finally gets around to having a plot it's about how Charlie Brown and Peppermint Patty, on a field trip to an art museum, mistakenly go into the supermarket next door, the way anyone ever has or ever could ever. We ended up spending a lot of the night pausing and pondering what exactly caused these specials to get quite this daft. We thought idly of the podcast we would make trying to figure these all out.

And this was the heart of our Thanksgiving.

Trivia: Glenn Seaborg, besides leading the discovery and synthesis of ten transuranic elements, was also cofounder of what is now the Pac-12 college athletic league. Source: The Disappearing Spoon: And other True Tales of Madness, Love, and the History of the World from the Periodic Table of the Elements, Sam Kean. (As the Pacific Coast Intercollegiate Athletic Conference broke up under the weight of scandals he lead a drive to clean things up and reform the conference as the Athletic Association of Western Universities, which has since morphed into the Pac-12.) 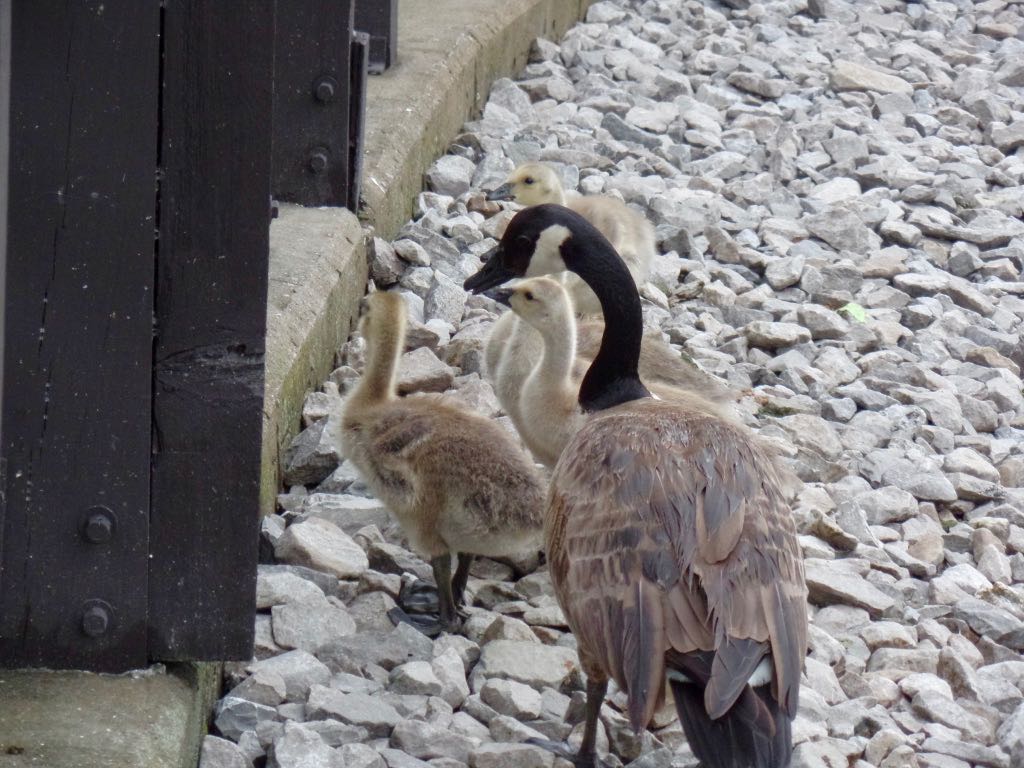 More of the goose family watching with great suspicion the people looking at them outside Mine Ride. 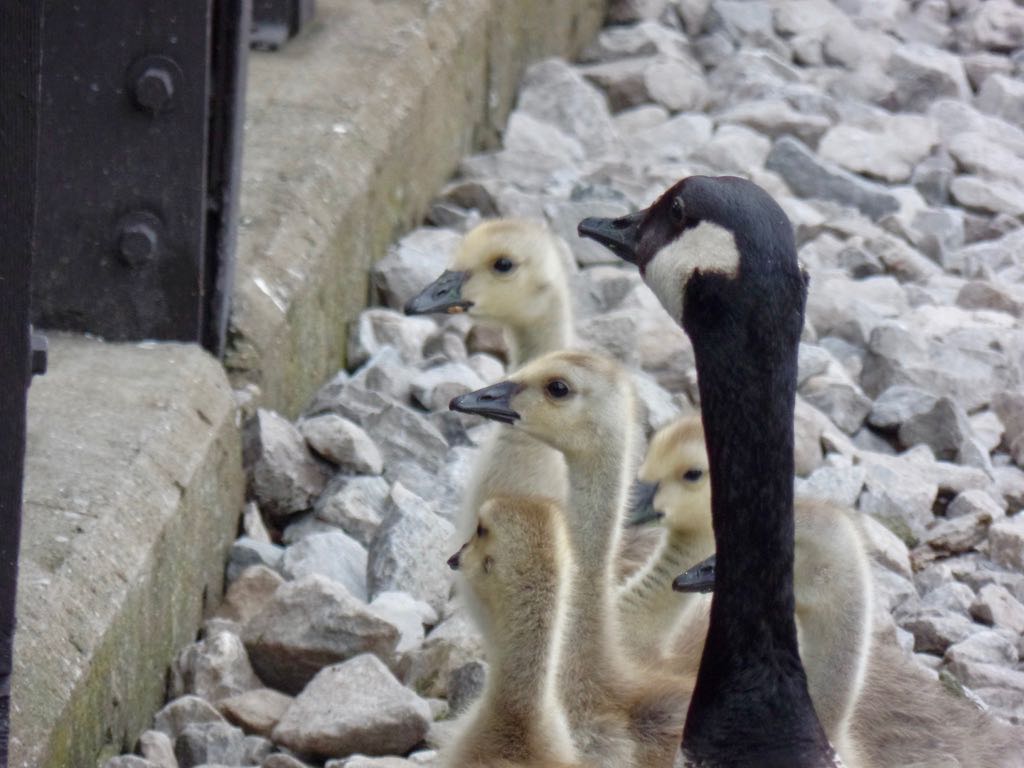 Yeah, Goose Parent is going to allow this to continue, but you're on a short leash, counsellor. 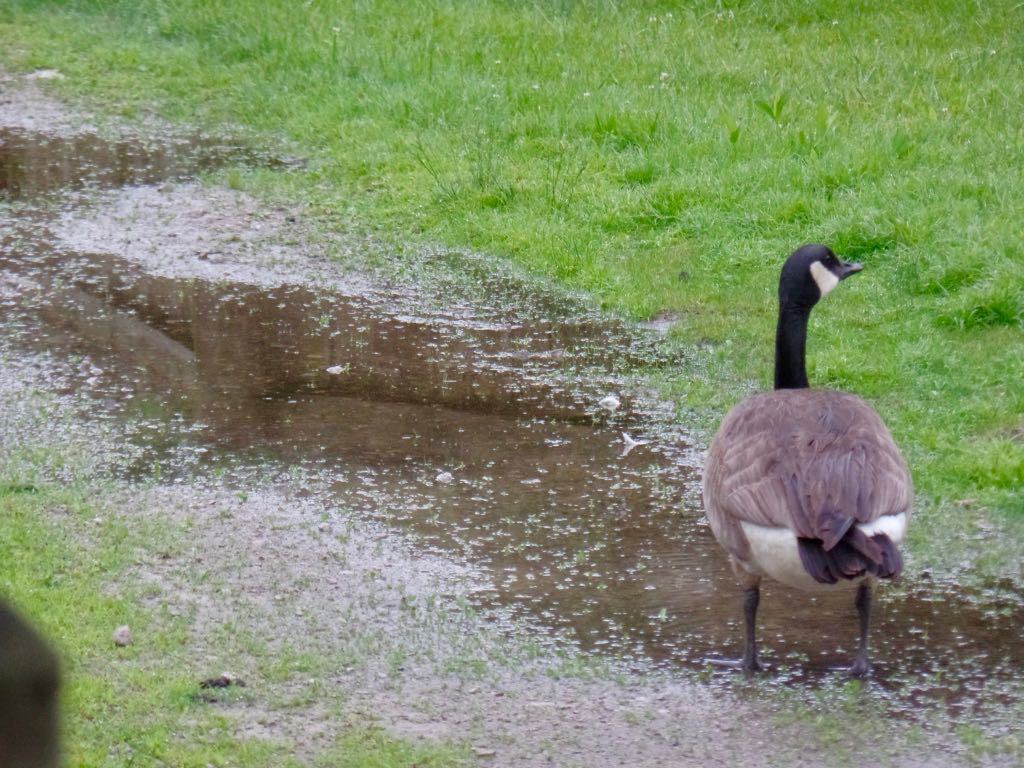 Another goose checks out some of the temporary puddles around the Mine Ride.