So, overnight, I got one of those shocking bits of news: Yesterday's post was one of the top-25 most popular entires on LiveJournal. This lets you know how far LiveJournal has fallen from its glory days of 2003-2006: they've reached the point where they kind of need me, sort of.

This makes me sorry to disappoint everyone waiting for a follow-up since there's not much. I realized I did forget a little anecdote in the Thanksgiving Day stuff. I'd thought to get a bottle of wine, since that's one of nearly three meals we have each year that we take with wine. I forgot that we don't have a good corkscrew, though. We used to have one, the kind with a screw that lifts up when you pull down the levers on the outside of the mechanism, but the screw from that fell out and for some reason we haven't thrown out the rest of the corkscrew. We have a little waiter's-style one, with no levers on the outside, but none of us could make the cork budge enough to drink. So it's sitting on the counter, the waiter's-style corkscrew stuck in it still, waiting for some progress on this front.

Yesterday we went down to the VFW Ann Arbor Pinball Museum for its annual charity toy-drive Black Friday event. This was just four hours in one of the the three buildings. It was a welcome chance to play, for us, mostly late-solid-state games. Also to eat more pizza than we realized we were quite doing. ... We also overheard the owner having a freak-out that someone let some actual kids in, and he was upset because there was, like, alcohol there and he did not want whatever kind of trouble this might engender. He wanted it to be a 21+ event only. The owner is renowned in Michigan Pinball for getting upset at things (including, inexplicably, MWS); this was a rare chance for us to be near enough to have to look awkwardly away from the goings-on.

Anyway, let me share the tail end of pictures from that rainy June 2018 visit to Cedar Point. Coming up next: amusement parks! 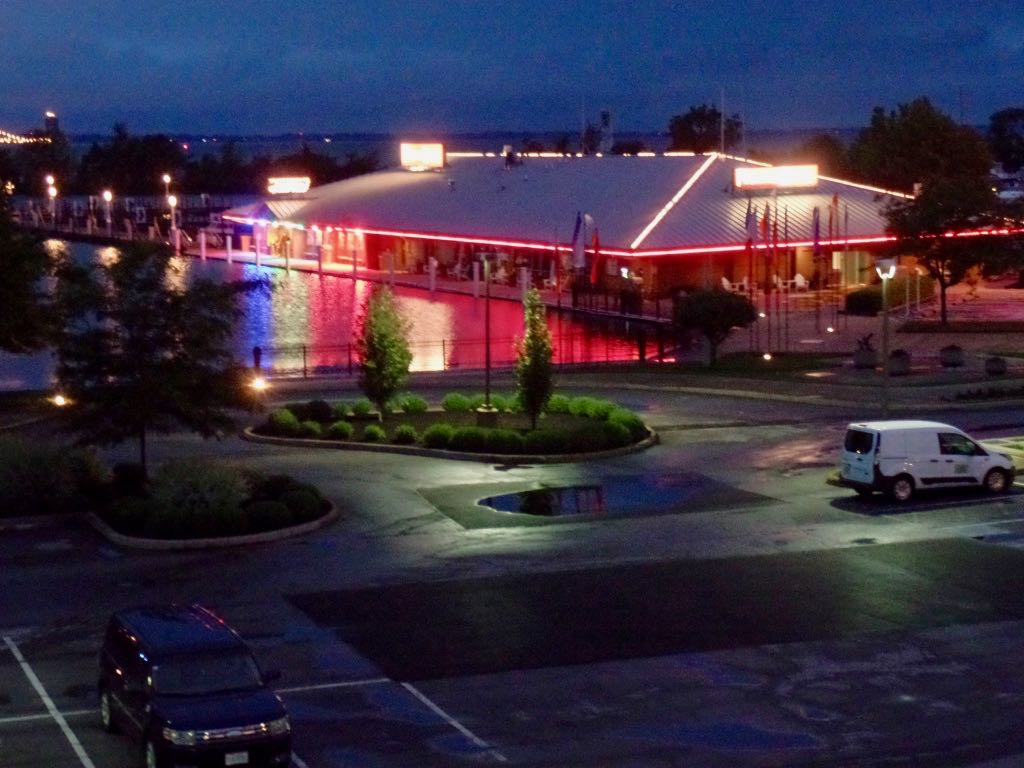 Sunset already! Wow. View from the ValRavn station out over one of the marina restaurants, facing the west side of the point. 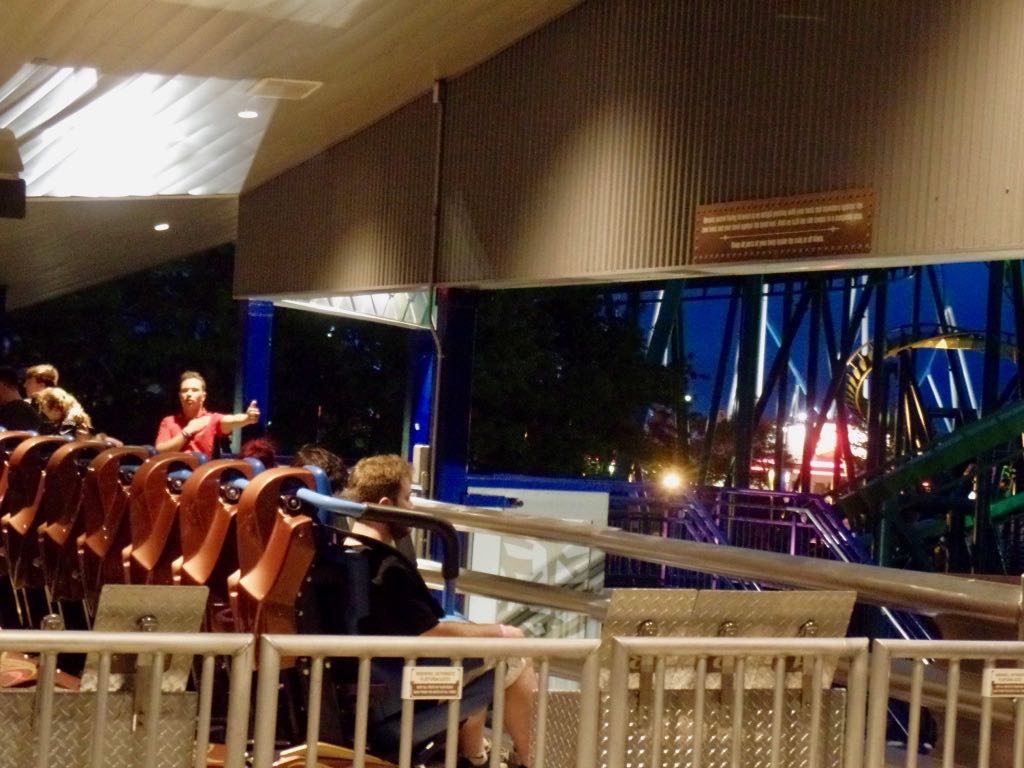 Looking back at the station of ValRavn; they've already got the train loaded up and ready to go, about a minute after the train pulled into the station. 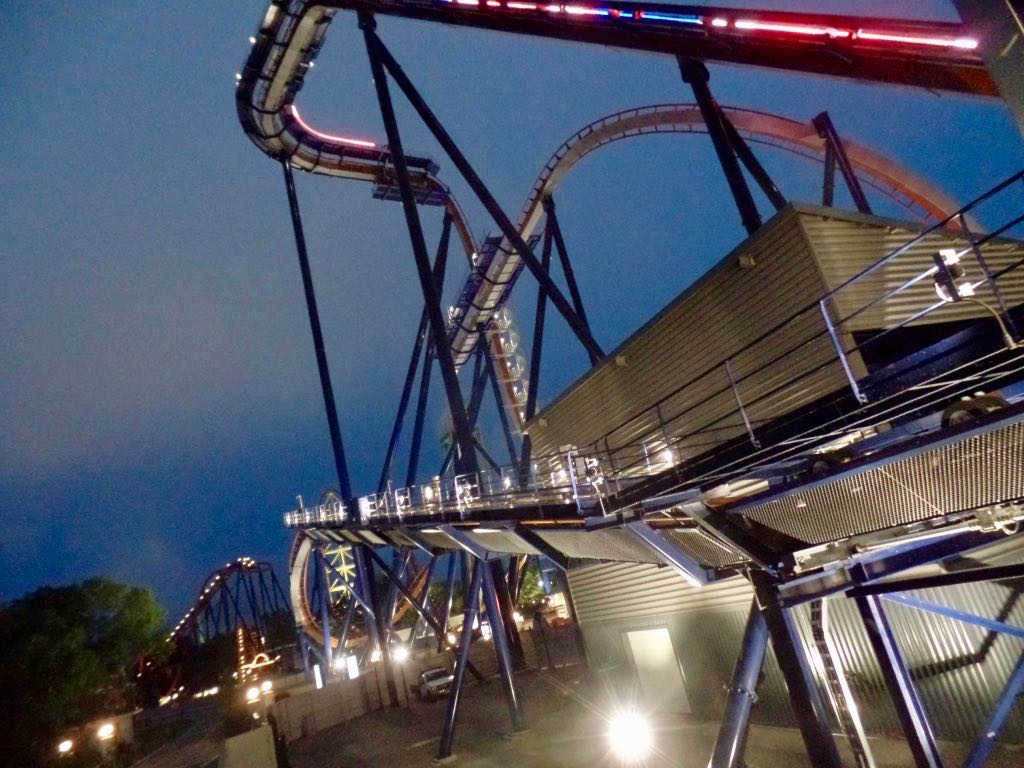 The return leg of ValRavn, on the lower part of the photograph, with the lift hill near the top. You can also see, around the center, the nearly vertical dive that's the signature of this type of roller coaster. 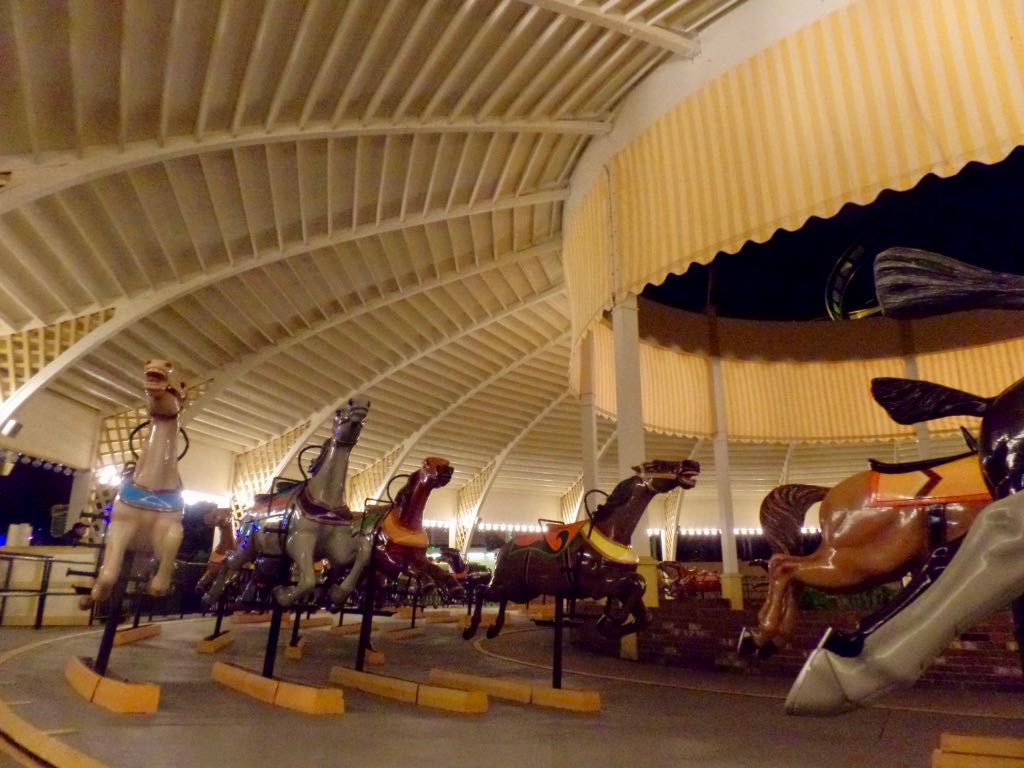 Cedar Downs, the racing carousel that's one of only three of this kind of ride still existing. 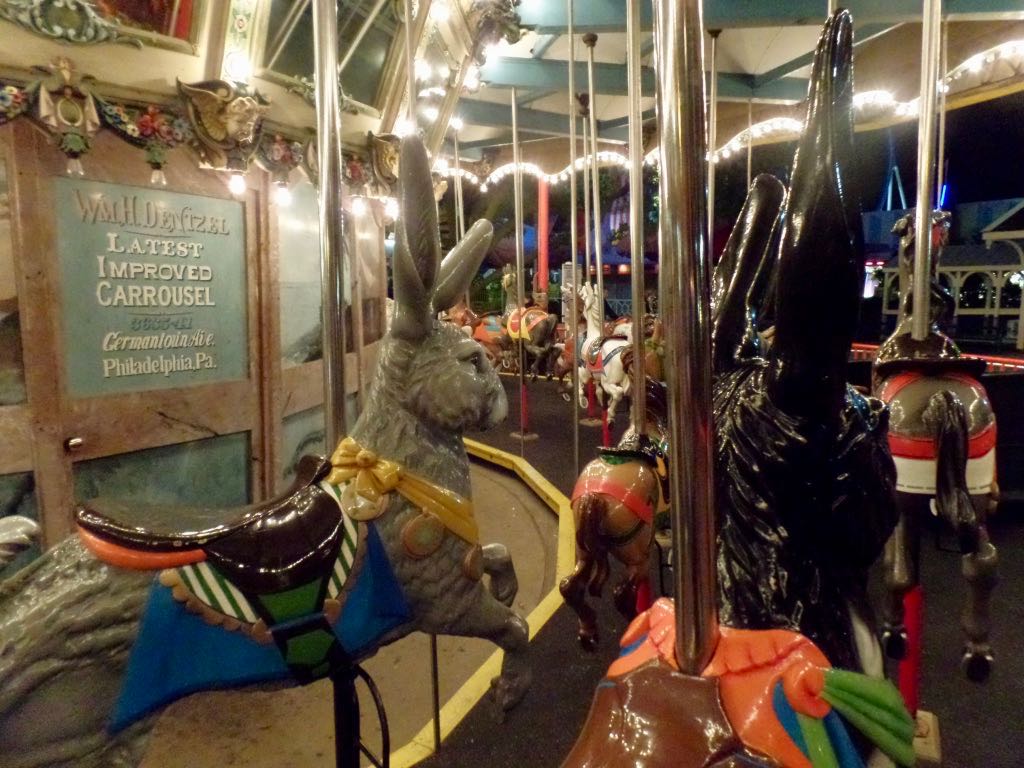 And two of the four bunnies on the Kiddie Kingdom Carousel. Note the Dentzel factory sign with one of the many variant spellings of carousel that were used in the Golden Age of carousel-carving. The black bunny with white spots inspired 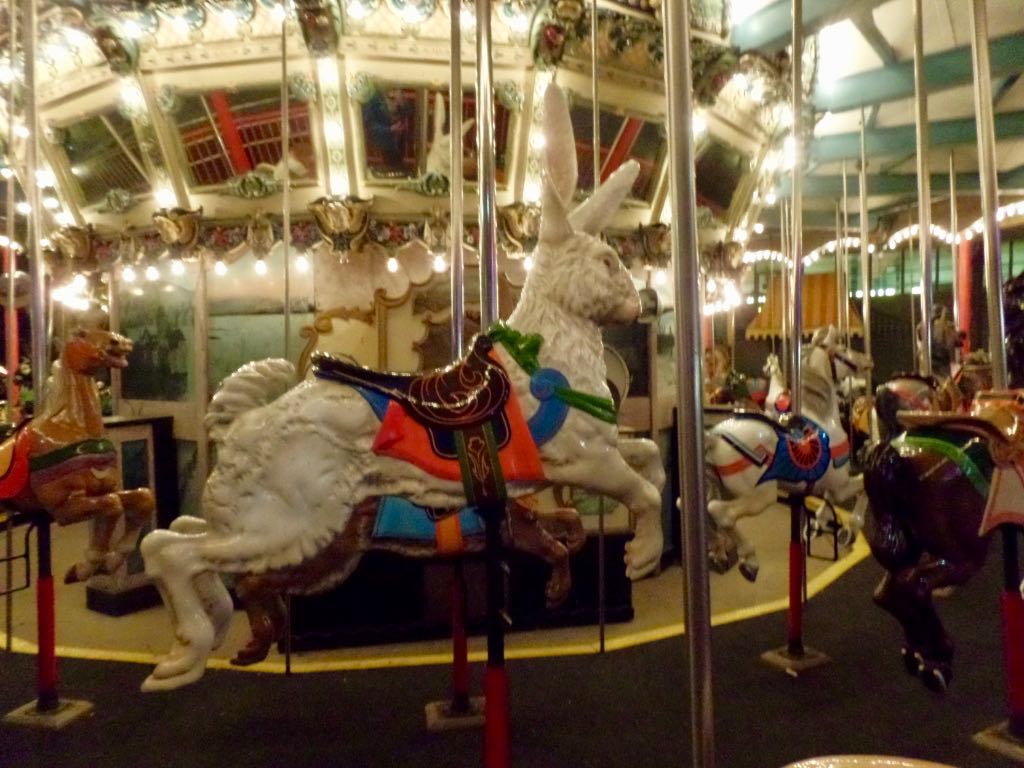 One of the other bunnies on the Kiddie Kingdom Carousel; the fourth bunny is hidden behind the white bunny. 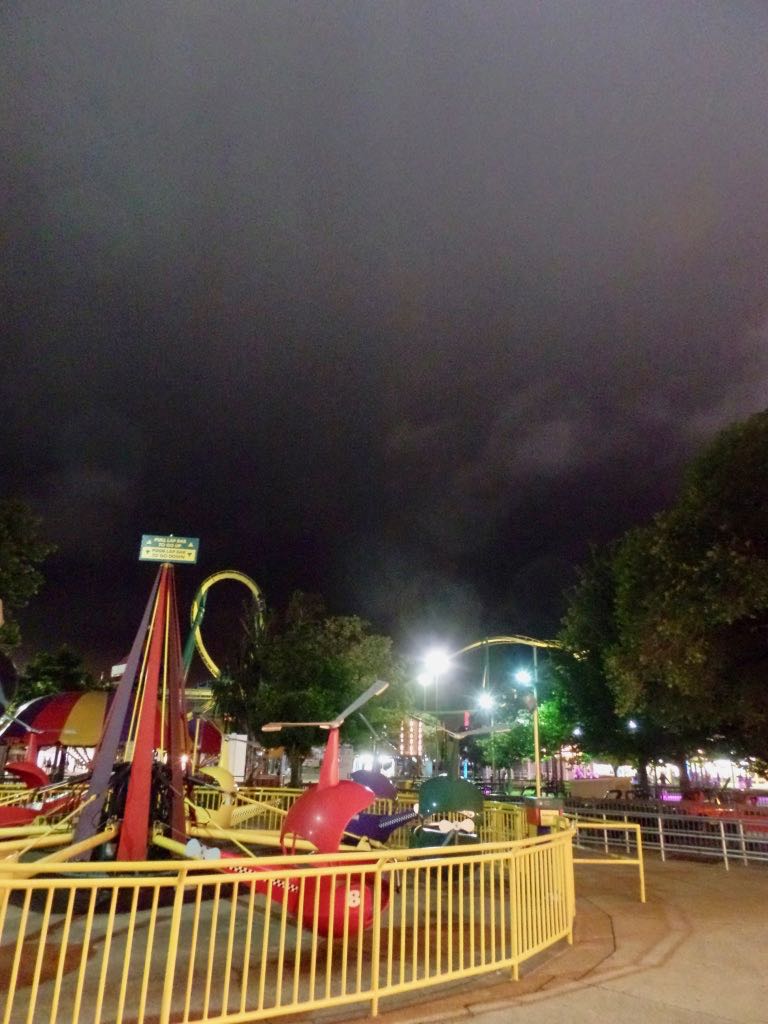 Looking out over the Kiddie Kingdom rides, with the storm-ready sky high above and illuminated by Cedar Point's own lights. 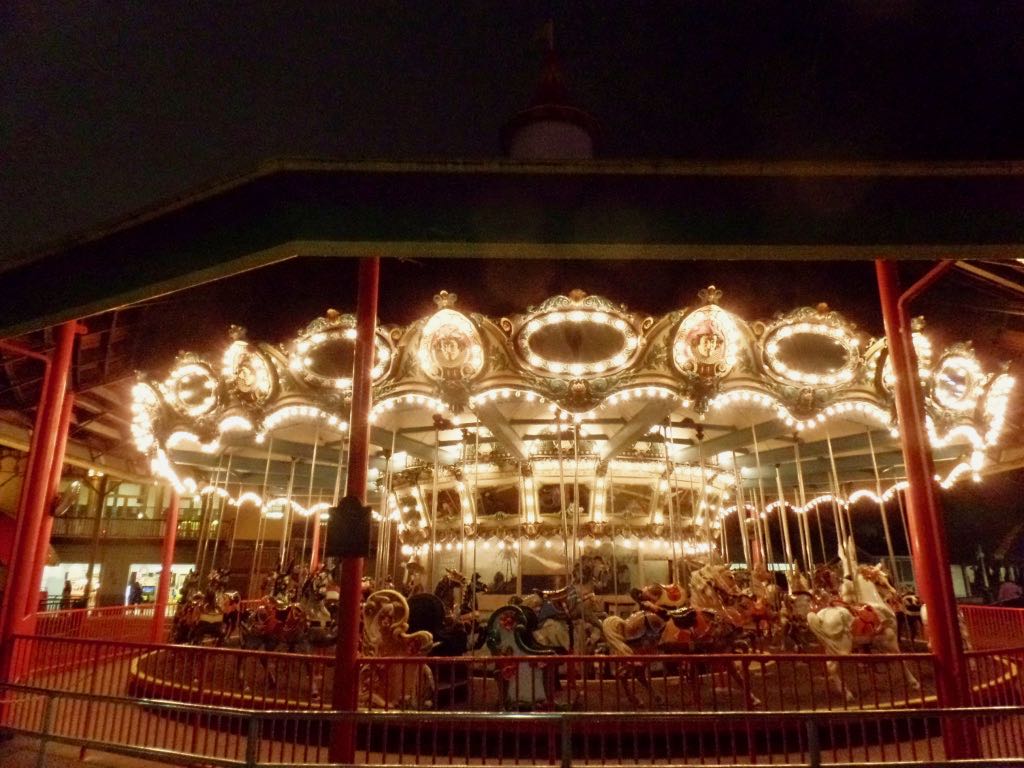 A look back at the Kiddie Kindgom carousel after it's made its last run for the night. Isn't this fantastic lighting? Let's just step up a little and get a closer view. 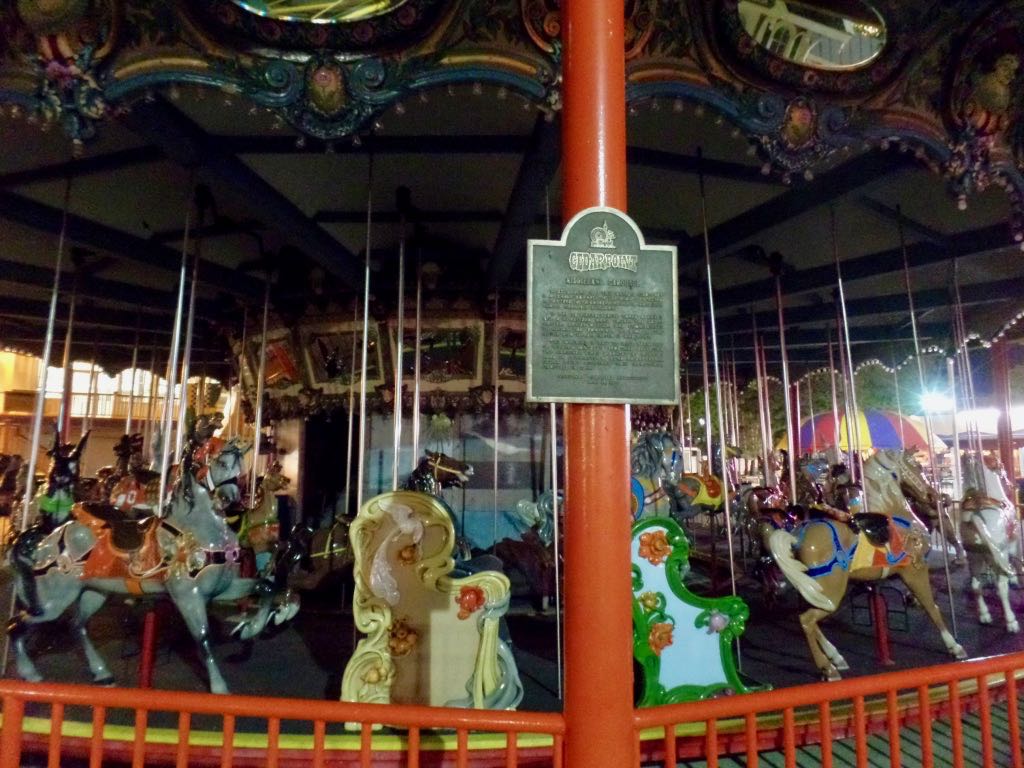 Whoops! ... Well, you can see the existence of the historical plaque explaining the history of this carousel, although it's not legible at this remove.

Trivia: In Athens of about the fifth century BCE the name of the twelfth month of the year was Skirophorion. Source: Mapping Time: The Calendar and its History, EG Richards.

PS: Exploiting my A-to-Z Archives: Z-transform, which is not all about falling asleep.