bunny_hugger's started her annual Advent Calendar marathon. Watch along with us as we speculate about panel doors and open them up. If this doesn't sound like much to you, please, trust me.

bunny_hugger has a knack for finding Advent Calendars worthy of comment. It may be impossible to top last year's FrankenCalendar, but this year? She has two to open. You'll like.

Our big thing this weekend was another Fremont pinball tournament. This one came under a Winter Weather Advisory, warning of snow and ice and hazardous driving. But it was marginal enough that we couldn't quite decide whether to stay home. Likely we would have except that MWS, coming from Flint and so setting out an hour earlier, hoped to go. And JB, in town, also wanted to go. So, particularly, we had to decide before MWS might go. The forecast, calling for no snow before about 1 pm, and temperatures above freezing, was not so bad that we obviously had to give up the idea as a bad lot, and so, we went.

This was maybe unwise. At least heading out. It wasn't bad to Grand Rapids, the first hour, but from there on we got slushy patches and roads plowed only by the traffic. This got particularly terrifying where we got into back roads, in what is normally the last half-hour of the two-hour drive. We were confined to the tire treads that were dangerously close to the oncoming traffic. MWS and JB, sitting on the right-hand side of the car, didn't think it was altogether that bad.

bunny_hugger, feeling the road under her, and me, seeing the oncoming traffic passing over our side mirror, did.

The consolation we expected from enduring this weather (``they plow the roads well in town and we haven't had any power failures'' --- AJH) is that there'd be a smaller set of players there, and easier pickings for the top-four positions. To an extent this worked: the folks from the Midland area, having to deal with even worse weather, couldn't make it. But this was counterbalanced by ADM and MSS, Grand Rapids regulars, surprising us by coming up. ADM particularly: he hadn't played in anything to speak of in months and apparently only just decided oh, he should try to make state finals this year. ADM is a past state champion; MSS probably could be except that when he gets rattled he stays rattled and tilts out games he could probably have saved.

The first round was three-player groups, with the top two moving on. Everyone's favorite kind of play since you only have to beat one person. My group included JB, who surprised us all by starting with three lousy games. He recovered at the end, but not enough to move on. Meanwhile

bunny_hugger was put in the deadliest first-round group, against ADM and PH. After a couple last-place finishes, including one on Knockout after she put up a game that would have won first place in literally any other group that played the game all day her morale absolutely crashed. Not helped by her thinking both PH and ADM were deferring their choices of game --- you could pick a game only once per day to play, so there's an advantage in saving a game you feel strong on for a later round --- to her.

Actually only ADM was doing this, and had only done it once when her mood crashed. But she started playing Jokerz without caring, only for MWS to point out she might not have already been knocked out. It was when PH picked Road Show, a game he liked, that she realized she might yet have a chance. And so she had; she ended up in a tiebreaker game against PH, a surprisingly low-scoring game of Attack From Mars that she lost by a whisker. So that wrecked her day, as a top-four, or at least top-six, finish is what she needs to secure her place in state rankings, especially if ADM is serious about making a run this last month.

So, playing for ninth-through-twelfth, she went on to beat JB, a thing she's convinced she can't do even though she does it most of the time when he goes to Fremont. Also a kid who was trying with adorable earnestness to console her.

Me, I made it to the second group, a four-player group, top two heading on. This group comprised me, ADM, PH, and what the heck, MSS. Definitely the toughest group of that round, except for my participation in it. I came in last place on Surf Champ, the game that saved me all last month, and a nearly 600,000-point Blue Chip got beaten by PH. I wasn't officially sunk until the end of the fifth game, of six, that round, but it was dismal. I ended up finishing the day in sixth place, and, mm. That'll help me hold 13th place in the state, I suppose, but that's all.

MWS went on to the final four, and I think he even took first place, which might just help him from falling into fifth place. Or let him get in range to take third place. Not sure what he's driving through three hours of snow for.

bunny_hugger had demanded that I drive back, and I accepted this. It had snowed off and on during the whole afternoon, but had cleared up by the time we set out. The roads were ... cleared, and apart from a couple patches along some of the back roads in pretty good shape. So the ride that we expected to be the tougher turned out to be the easy one.

Was it worth it? Boy, that's hard to say. I guess we're better off, in our own search for state championship glory, for having gone. And we had the luck that driving out nothing bad happened, but it was a closer thing than we would want. Had we known just how rough, particularly, the stretch right after Bailey, Michigan, would be, we'd have felt stronger about refusing to go, whatever MWS and JB might think of us.

Remaining on the pinball calendar this year: the Fall Survivor Series tournament in Lansing Wednesday. The Marvin's League championship Friday (in the first round

bunny_hugger and I are slated to go head-to-head). Frosty Fest Saturday. The Bavarian Inn Match Play Monthly next Friday. RLM's monthly tournament on the 21st. Silver Balls In The City, in Lansing, the 28th. Fremont double finals the 29th. And the New Year's Eve tournament. Plus, if we get really desparate for points, some tournaments in Ann Arbor on Sundays and Tuesdays.

Trivia: Samuel Gridley Howe, head of the Perkins Institute for the Blind from 1833 to 1876, fought in the 1820s for Greece in its war for independence, and was a member of the Secret Six, the society which helped finance John Brown. Source: Waking Giant: America in the Age of Jackson, David S Reynolds.

PPS: Let's have a couple more pictures of the Elitch's carousel. 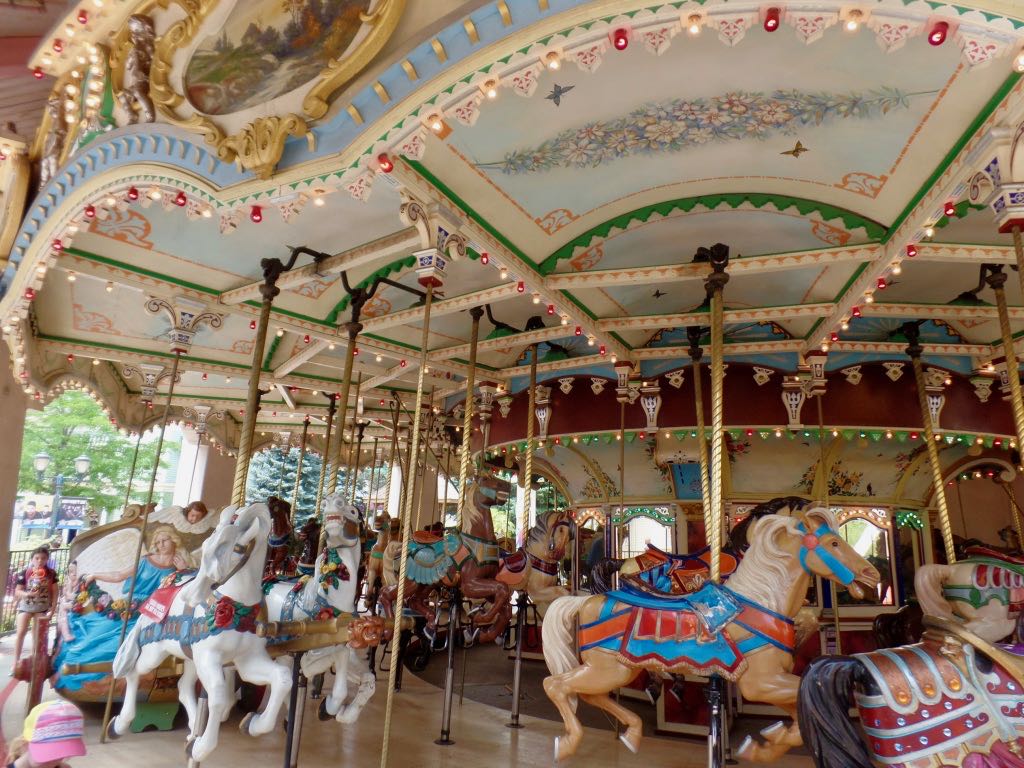 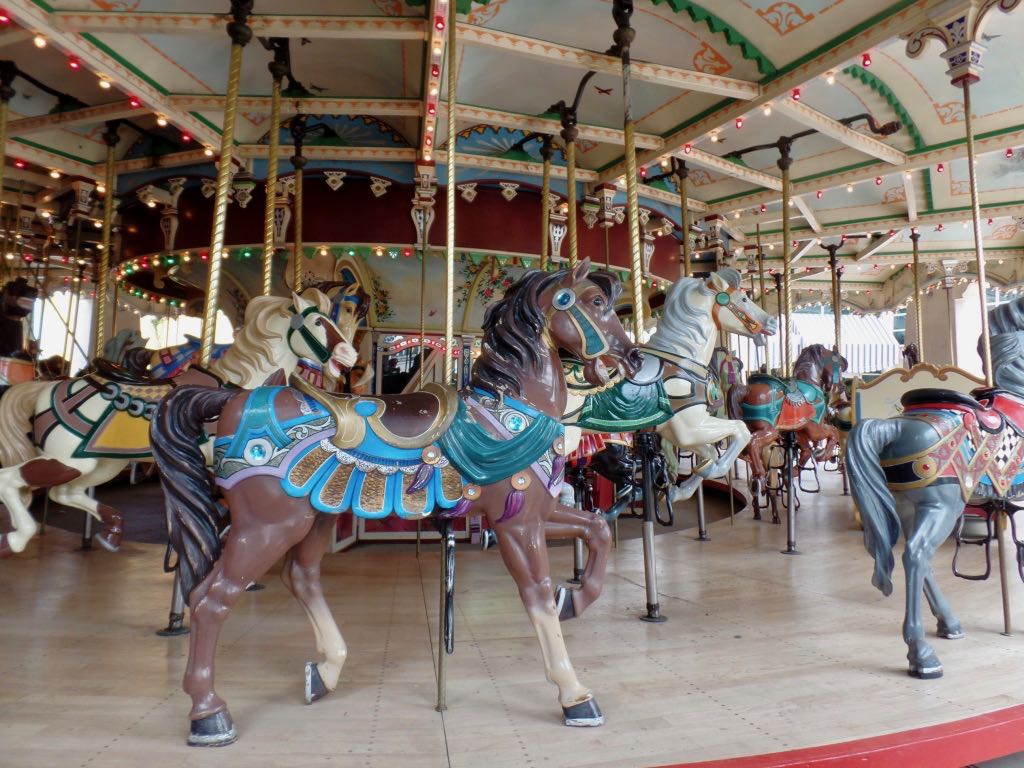 And looking the other way along the carousel. 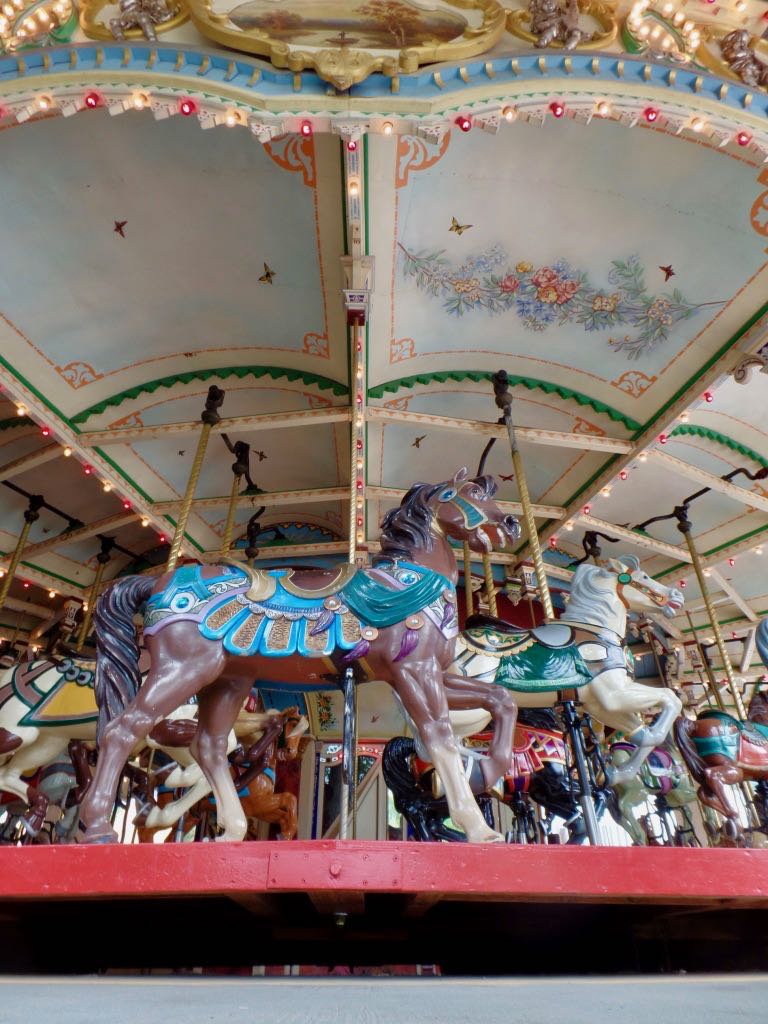 The picture I always take of the carousel from so far down you can see underneath the base to the other side of the ride.