It took all the strength I had not to fall apart, kept trying hard to mend

bunny_hugger ran another pinball tournament. She stumbled into this one by accident. Earlier this year she ran a little tournament, Summerslam, mostly so that league regular DMC could put up scores for Stern Pinball's Deadpool tournament. This was a silly little worldwide leader board, for people to put up scores on their local venue's Deadpool game during a tournament. After that one ended, the locals were really excited by the format and wanted more.

bunny_hugger to realize MWS hadn't caught on to the theme being riffed on with the Tuesday Night Smackdown and Summerslam pinball tournaments she'd already run.

She also realized that she could set up the format to let people put in games in more than just the local hipster bar. We picked games at the local hipster bar to count, yes. But also pinball games at Pinball Pete's East Lansing, where they have a Hobbit, a Pirates of the Caribbean (Stern), and a Guns N Roses game. We figured people don't play those enough so we'd encourage them to do more. The guy who fixes games at Pinball Pete's didn't understand why we picked Guns N Roses since it has a lot of problems. Well, we thought a surge of people playing it would encourage them to fix the game better.

We also picked a couple games at the Royal Scot Bowling Alley, because that's where our hipster bar's Beatles pinball game had been sent, and

bunny_hugger wanted people to play Beatles. (It's a controversial game. A lot of people don't like how it hasn't got ramps. And it does play like an early-80s solid state game, surprisingly fast most of the time.) This backfired in part: two people put up scores that beat

bunny_hugger's hard-won grand championship. And the game left the Royal Scot to return to our hipster bar, when they opened up some more space for pinball games.

bunny_hugger set up a mini tournament that would just be for that, which is ridiculous but should let Lansing Pinball League players populate that leader board too. (Maybe dominate it: this tournament's proving surprisingly unpopular.)

Wednesday evening came the playoffs, which are the part of the tournament that actually count for anything. The A Division playoffs would be two rounds of four-player groups. The B Division would be playoffs between however many people were left over, which turned out to be just two people. For a long while it looked like there'd be just the one, driving up

bunny_hugger's pinball-event management anxieties, but mercifully MWS rolled in at the last minute so there'd be at least some competition for the B Division pin. And she got in A Division, in the eighth seed, herself.

She did not get through the first round, which is annoying but understandable: she was in a group with DMC, RED, and PAT, and that's a tough set. I was in the other group, with MWS, JB, and IAS, and ... you know, that's not really a less bad group. But IAS had a couple lousy games in a row. And on Batman 66, ordinarily a JB specialty, I had a shockingly good game. The secret to high scoring in the game is Minor Villains, modes that represent characters like Shame and Egghead, and I played those and for a wonder won them. So I was in place for finals.

There, I just flopped. DMC got to pick the games, and the one I'm strongest on, Willy Wonka, I stank on. I did worse on Elivra. And I was just getting something together on Batman when suddenly my game was over. The game ended with the match a tie between RED and DMC, possibly because RED thought he had already secured first place in the tournament and gave up too easy.

So they went to a playoff game, and happily, chose Beatles. Here both these players, both really good, RED already slated to go to the state championship, put up lousy games. Beatles is a low-scoring game but they're both people who should average about three million points. RED went first and barely wrestled the game to giving him about 1.4 million points. DMC wasn't doing much better, barely getting anything together, and at the end of his last ball --- well, we thought he had it on bonus, if he didn't tilt, but when the ball rocketed for the outlane he gave the game a good hard shove, sliding the front a foot out of place. And then, I suppose figuring his game was lost, the shoved the game another three feet to the side, leaving it sitting at a 45 degree angle to the other games in the row. All the onlookers gasped.

And the game did not tilt.

I think it only gave a single warning.

His bonus counted up and, as we thought, he had plenty to win the match and the tournament. And the medal made up for the winner, which was made using a fancy decorative ribbon that DMC himself had donated to

We joked that he must have shoved the game so hard that the tilt bob fell off, but --- even though RED had the keys to open the game -- we didn't check.

This tournament got a weaker attendance than SummerSlam, although it also ran for less time, mostly because of our wait for Stern to announce things. But it was also an easy tournament to run, and we took some glee in making people play games such as Wrestlemania and Guns N Roses that they'd otherwise never touch.

bunny_hugger will likely run one again, and I'll support her as best I can, when she's had the time to recover her energy.

PS: Here Are All My Past A To Z Sequences, in case you missed any. 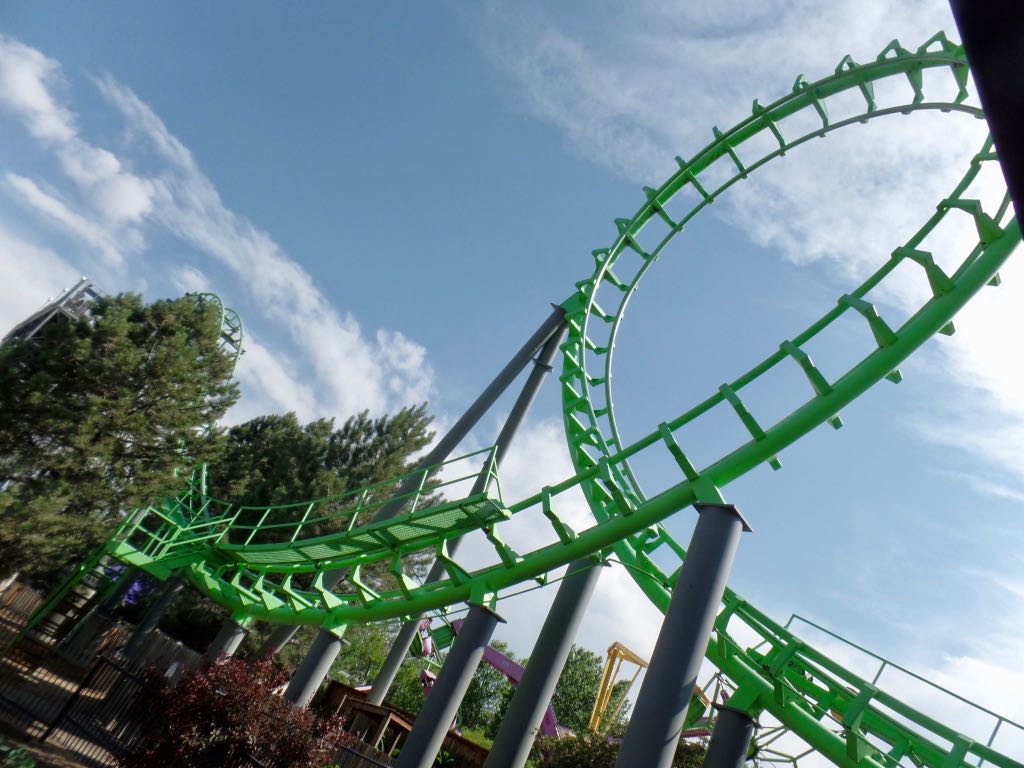 The vertical loop of Elitch Garden's Sidewinder, a launched roller coaster and twin to the Lightnin' Loops, formerly the ride at Great Adventure. 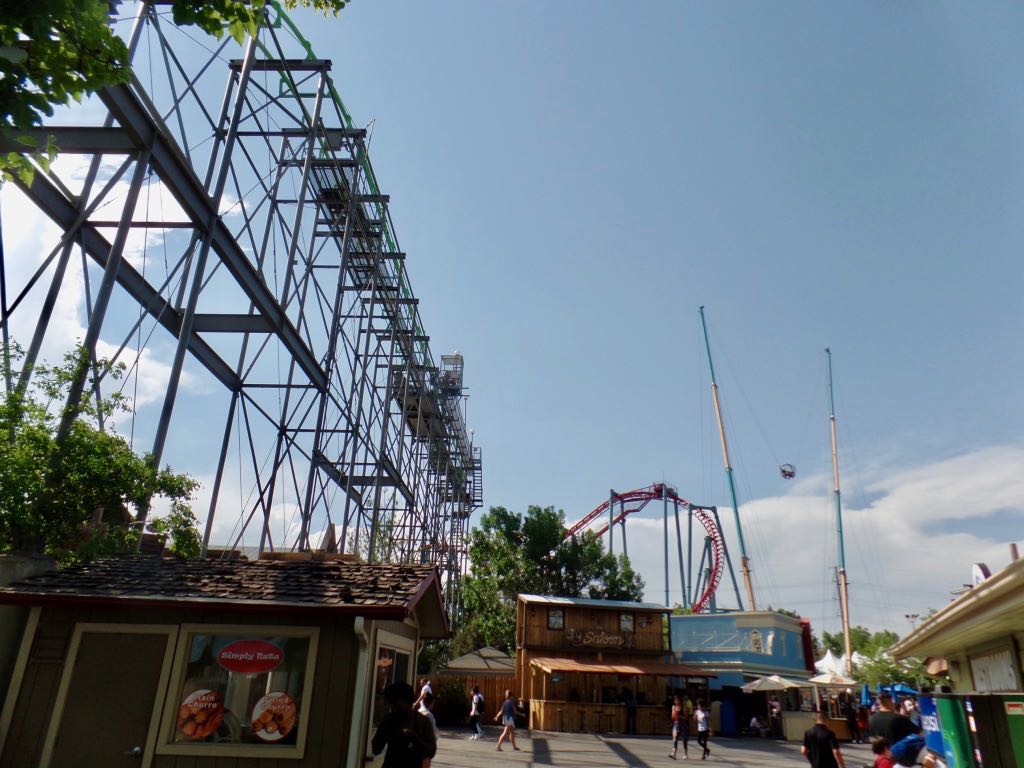 Looking up at Sidewinder's main track, high above there. Look at that clean, simple line and eye-catching path. Gosh, how could Gosh, Lightnin' Loops --- an intersecting pair of these --- have ever lost popularity? 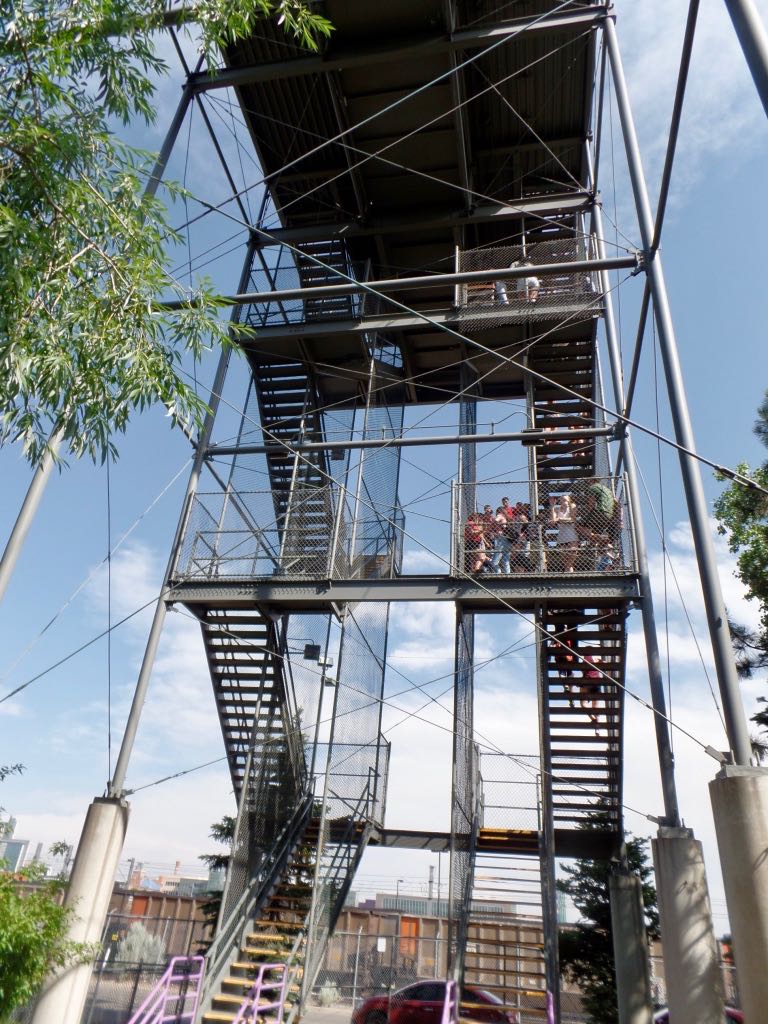 ... Oh. Yeah. You have to walk up about six storey's worth of stairs to get to the ride. And back down as much when you're done with the ride. Right.