Now some of us are barmy and battered

bunny_hugger got a Facebook message from her aunt who never messages her. She couldn't get

bunny_hugger's mother on the phone; did we know where she was? ... And that's never a good way to start a day.

We knew where she was supposed to be. She was going to the Tannenbaum Farms, there also to get a Christmas tree.

bunny_hugger's aunt had grim news. She needed her sister to call.

We have a tradition of going to the Tannebaum farms, where

bunny_hugger and I cut down two trees, one for our living room and one for the bedroom. Her parents drive up, intending to cut down a tree, and then buy the first precut one they see and then fret about how dead it is. We had figured this year to head them off: claim we were meeting at the tree farm at noon, like always, and then actually get there at 11:30 and head them off. We got there at 11:30 as planned. This was before they got there, and we had time for hot chocolate and a doughnut and to watch for their new car which we don't really know on sight yet. They got in a couple minutes before noon.

bunny_hugger's uncle died. The one living in London, whom we visited in 2012, right after our wedding, and 2015, shortly after his wife had died. The only of her aunts and uncles that I've met.

bunny_hugger's parents the news right after they parked. There's probably no good place to do it but we just couldn't figure that delaying would be anything but horrible. Her mother looked devastated, much worse than I had expected. He was 89, and had been frail for ages, and never recovered from the blow of his wife dying.

bunny_hugger and I had kind of expected that he might die anytime. Her mother knew that he expected to die anytime, but that after so long of his expecting it anytime it had become something that wouldn't happen anytime.

Her phone wouldn't call her sister, so we just went on tree-shopping then. Our plan to intercept them so we could cut down a fresh tree for them was a success. We found an adorable one right near the front of the lot. And with our hacksaw, brought from home, were able to cut it down in about ten seconds. Also near to this was another tree that

bunny_hugger and I got for our own upstairs. While her parents sat indoors, having hot chocolate or such, we walked into the wilderness to find our tree for downstairs. This, too, we found in surprisingly little time. We got our trees bundled up, and drilled for our spike-based tree stands, and drove back to our house with them.

We set coffee going and started a fire. And

bunny_hugger's mother got some word on what happened. Apparently her brother had gone out after dark Monday, tending something in the yard. Possibly the bird feeder. He fell, apparently, and couldn't get up, and it was a terrible long while before someone heard and called an ambulance. They found him and he refused hospitalization. This we can't understand, except that he may have been afraid of a psychological evaluation. He's always been a bit dotty, but add to that the cognitive problems of age, and depression ever since his wife died and ... well.

bunny_hugger and I don't see how he wasn't taken to hospital anyway, given that he could plausibly have had a head trauma when he fell. If he did fall and didn't have a heart attack instead. But they were convinced he was safe to leave alone, and they were there and saw him, and were the professionals.

The next morning the neighbor who'd heard his cries for help tried phoning him, and again and again, and he didn't answer, and it transpired he had died in bed.

We are told that his executors have found a home for his cat.

bunny_hugger's mother has been thinking over her last call with him, and trying to remember just what he said.

bunny_hugger had mentioned just the other day how he went through and clicked like on a bunch of her Facebook posts, going back months, as he would do.

The trees are lovely, although the one for downstairs doesn't have a real leader. We're thinking of what to use to top the tree.

Trivia: The Apollo 12 astronauts were released from quarantine the 10th of December 1969, about 36 hours ahead of the original schedule. Source: Where No Man Has Gone Before: A History of NASA's Apollo Lunar Expeditions, William David Compton.

PS: Why does the Quantum Mechanics Momentum Operator look like that? An open-ended thing where I genuinely just wonder about something from mathematical physics.

PPS: Have almost gotten around to riding Sidewinder and Elitch Gardens. 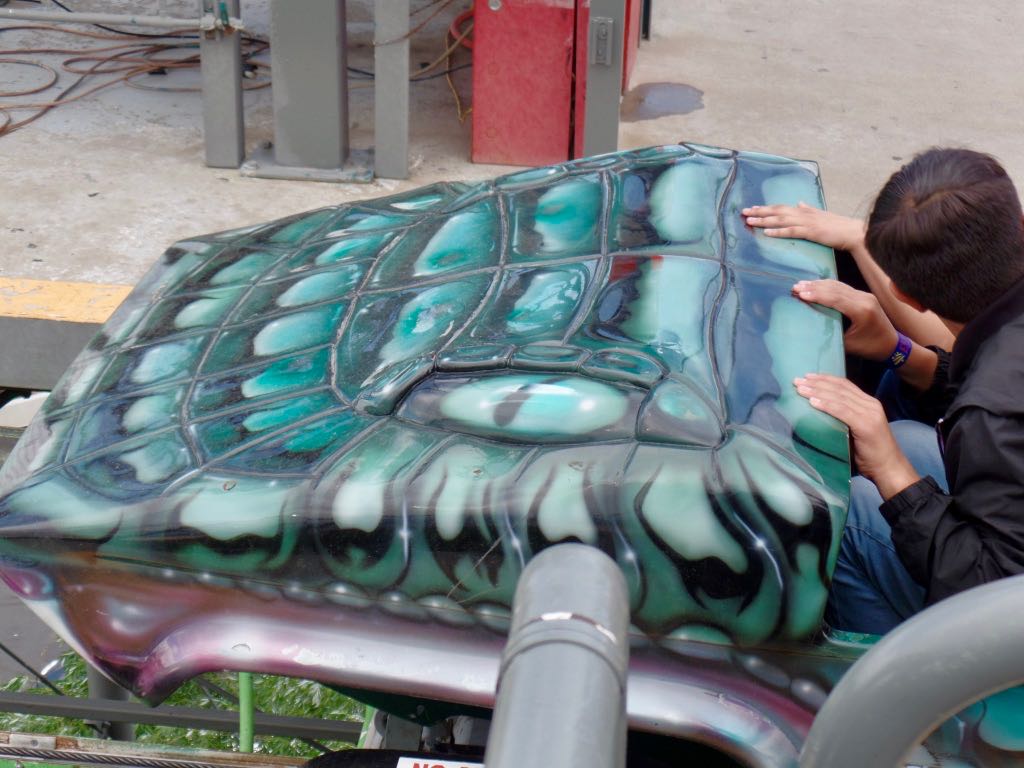 Here's a good up-close look at the front train of Sidewinder, and its snake paint job. 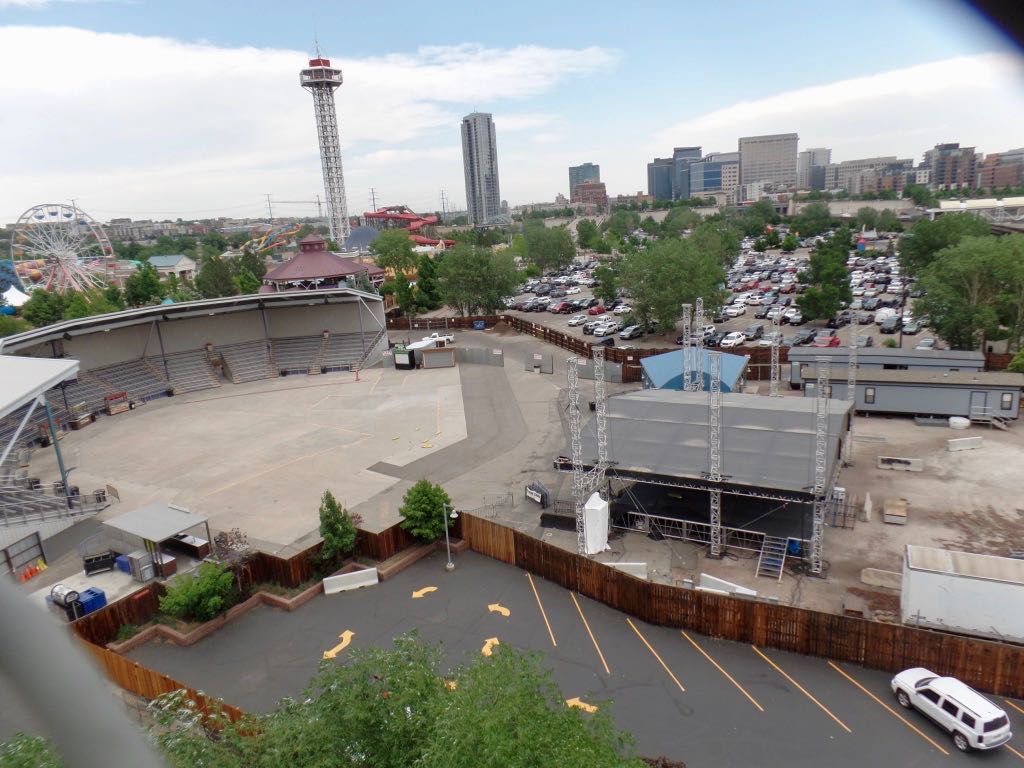 Looking out at the other end of the park, with the drop tower and, in front of that, the carousel. The park's parking lot is off on the right. See if you can spot the rental Dodge Challenger we had! 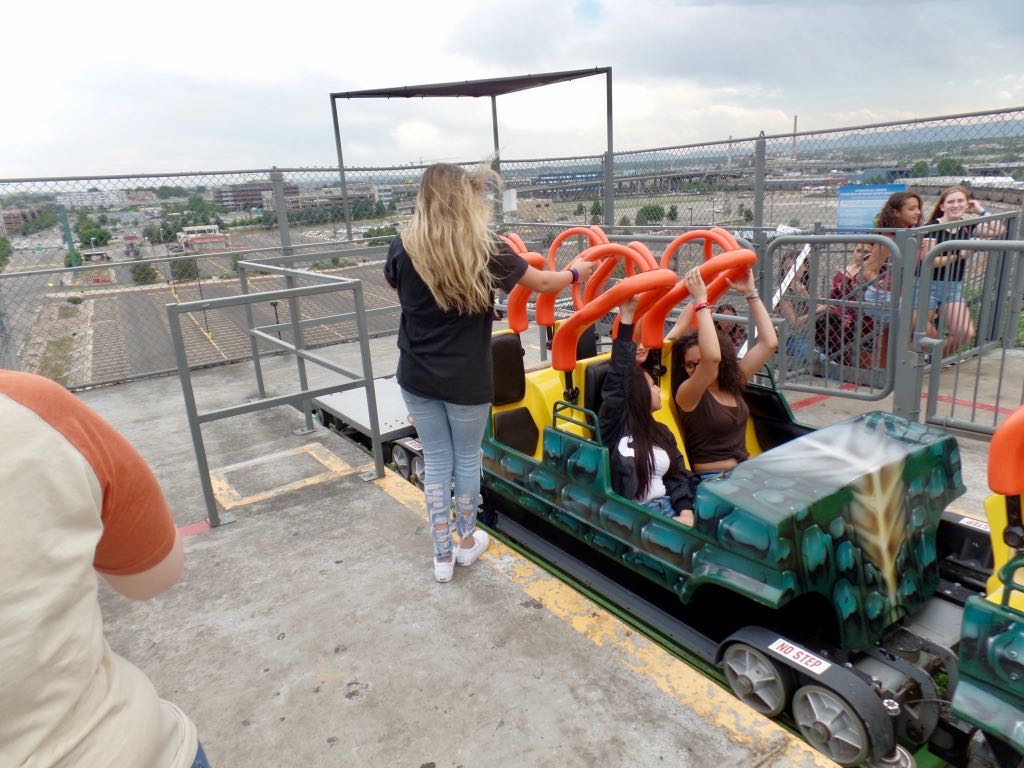 The next train load full of people getting on the roller coaster. ... You know, I wonder how they get the train off the track for maintenance or winter storage.