'S what I love to see

Back a bit. Friday was the season finale for Marvin's Marvellous Mechanical Museum's pinball league. It had been a turbulent season, one that included

bunny_hugger missing a league night because of a work obligation, and also her getting a perfect night --- five first-place finishes --- a feat I've never done and that I think MWS has never done either, not at Marvin's. Through hard work and lucky play she had finished the season in fourth place in the standings. I finished fifth, so that we would face each other in the first round. Of course. There were people who didn't know we were facing this. We had known for nearly a month that if the three people above us all showed up, we'd be facing this.

So. The first round, best two of three. She got to pick first game, me second, she third game if necessary. Her pick: The Addams Family. Which is what I had guessed she'd pick, with Revenge From Mars the second guess. It's a good pick. Everyone who plays pinball competitively knows the game and likes it. It's maybe the iconic modern game. But it's got a lot of late-solid-state gameplay in it, particularly how it can punish you for one unlucky bounce. She has only a fair game. I fail repeatedly to make the skill shot, which is normally one of my strengths --- if you don't make it just right the first time, usually, you can just let the ball drain and get it right back, a move I'm supernaturally calm with trying --- and get soundly beaten. All right. My pick. I think seriously about Willy Wonka, but that's being played.

So I go for Grauniads of the Galaxy, trusting that Rocket Raccoon will come to my aid. And that whatever its problem is today --- there always seems to be something wrong --- won't spoil the game for us. Well, that's not a problem. What spoils the game is I'm not able to make any shots.

bunny_hugger doesn't have a great game either --- she's already got her next game picked out and it's Attack From Mars --- but it's better than mine. She'll finish the league in at least sixth place, maybe higher. Me, I go to the Second Chance bracket, a series of win-or-go-home matches.

This puts me up against DAD, a heck of a surprise since he finished the regular season in first place. Also surprising: I beat him on his game, Deadpool, on a third-ball rally. I also play MES on Willy Wonka, coming from a rough start to a crushingly good finish. I might yet make my way up from the Second Chance bracket to win the tournament! Or at least a trophy. All I have to do is beat ... oh.

bunny_hugger, who's had her first match loss. Right, then.

She still has game choice, and goes back to The Addams Family. Everything that made it a good pick before makes it still a good pick. And once again, while neither of us has that good a game, she has a better game than me. I'm knocked out in fourth place for the league. She's guaranteed at least third place. Second, if she can beat MJV on his pick of game. It's Black Knight: Sword of Rage. She's not able to, although she has a third ball rally that turns it from looking-hopeless (a hundred million to one million points) to something that's more respectable (she got up nearly 40 million, after an exciting recovery; if she could've gotten the other multiball going she might have made it).

Still, third place. The first time she's taken home a physical trophy for an A-division in an open tournament. And a great help in her struggle to remain in the top 24 for the state, although, more about that tomorrow.

Meanwhile over in the B division, the lone trophy went to PAT, the fellow who ran that basement tournament on all old-school games a couple months ago. This was a feel-good story. PAT can be described with only slight exaggeration as having a Job-like November: he lost his job, his house was flooded (forcing him to short-sell all his pinball machines), his mother died, and then --- the day after Thanksgiving, as he was staffing the VFW Pinball Museum toy-drive charity event --- his brother died. Not to say that a plastic trophy for B Division of season ... something ... of Marvin's league makes up for any of that. But it's a good night, after a lot of bad nights, and that is a glorious thing.

Also in door prizes I won a Marvin's t-shirt. I'd wear it the next day, hoping for a spot of better luck in my pinball play.

Trivia: The peace congress ending the Crimean War, from February to April 1856, was theoretically the first general European congress since that in Verona in 1822; other international meetings had been conferences limited to specific subjects. Source: The Struggle for Mastery in Europe ,1848 - 1918, AJP Taylor.

PS: Reading the Comics, December 2, 2019: Laconic Week Edition, a handful of comic strips and where 'root' as in 'square root' comes from.

PPS: Yes, finally, having ridden Sidewinder at Elitch Gardens we ... go back down the other side of the roller coaster. 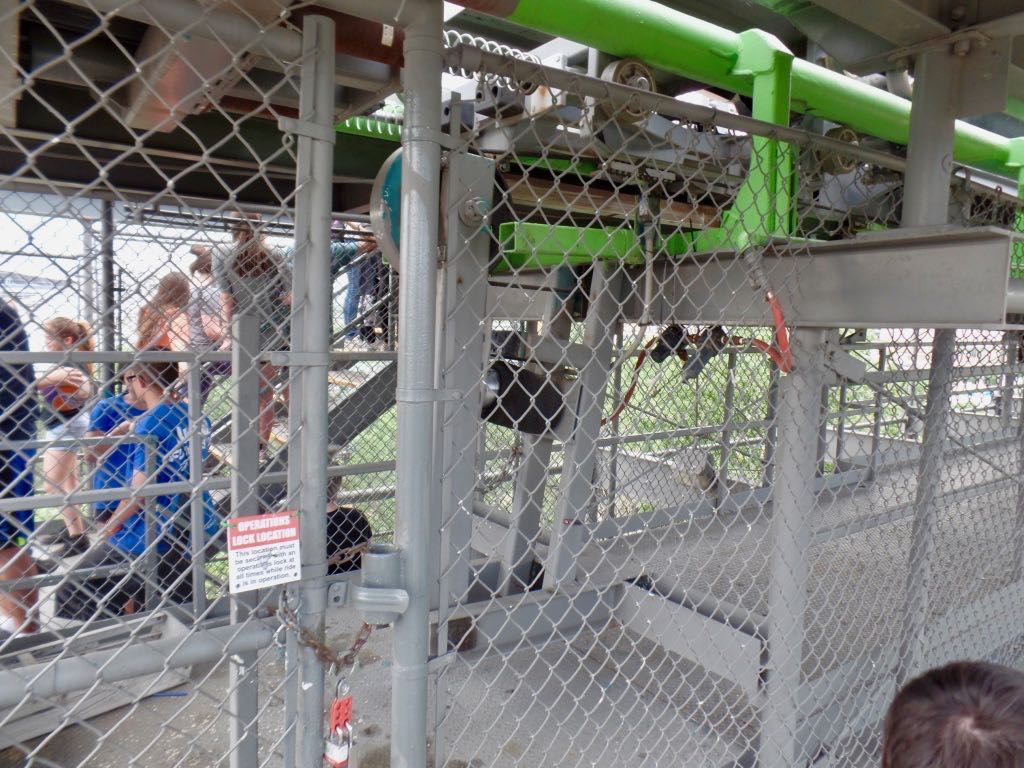 The underside of the launch station, from the departing side of the coaster. 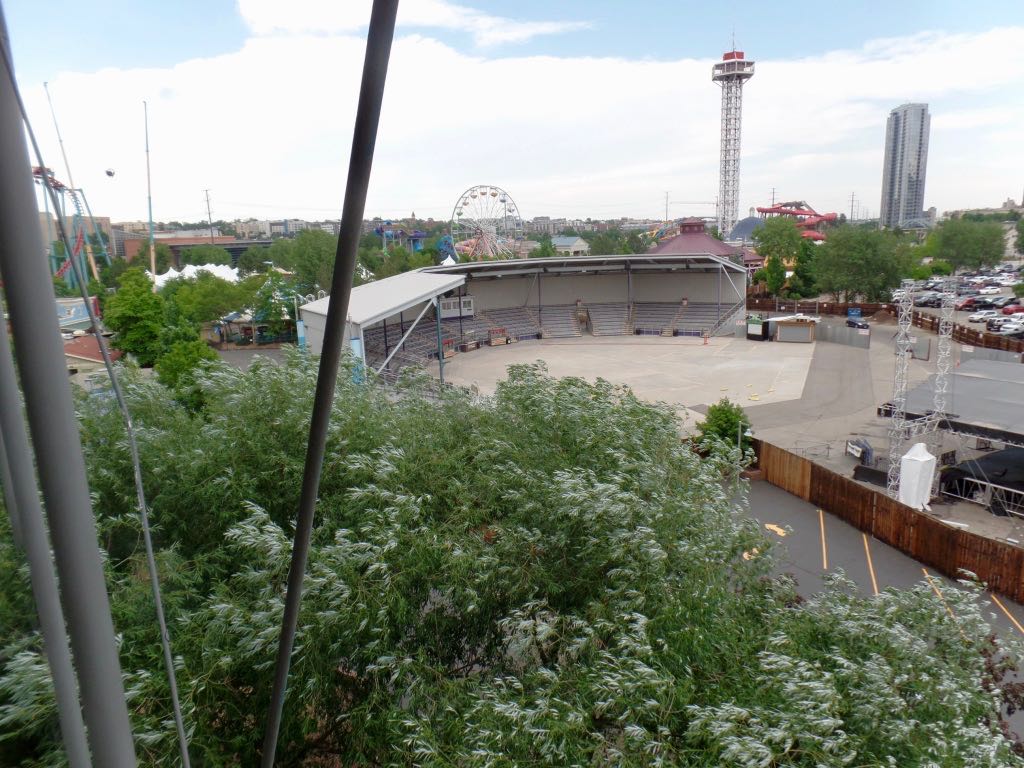 Another look out, while I have some altitude, of the amphitheater and drop tower and Ferris wheel and I think that's the spinning teacups ride in there too. 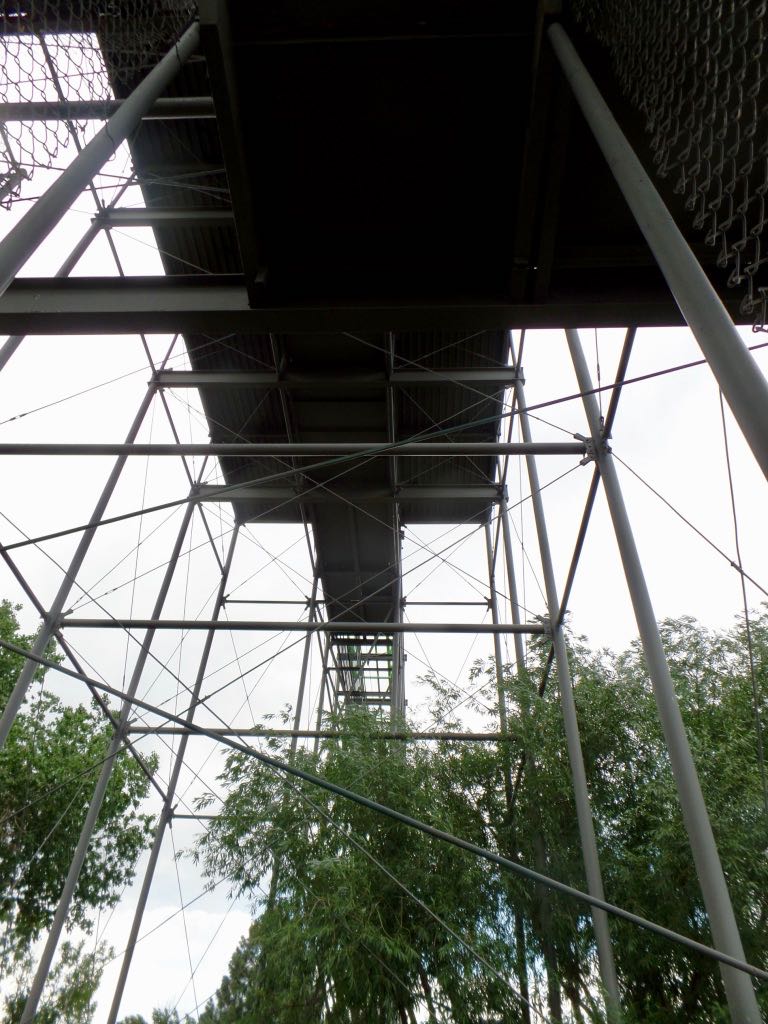 Looking up at the Sidewinder station from the ground again.