Ain't been round since you know when

With the end of Frostyfest there aren't any more major Michigan pinball tournaments on the calendar, and there won't be. (Sanctioned events need to be scheduled thirty days ahead, except for launch parties for new pinball machines, and none are due out.) There are some medium events left, though. One was last Friday, the Bavaria Match Play Monthly in Frankenmuth. We had kind of wanted to go, since it's great to see Frankenmuth especially as the town gets all its lights on. And, hey, a strong finish would get

bunny_hugger back into the top 24, or at least into the running for it. And MWS said he was thinking to go. He didn't, but it was encouraging to us to go. We ended up a bit squeezed for time (me for getting a haircut,

bunny_hugger for getting grading and decorating done), but thought it'd be a good use of our time. Even if we wouldn't have time to make a side trip to Bronner's or any of the shops around Frankenmuth.

The tournament was at the Bavarian Inn Lodge fun center, which we hadn't been to since the similar tournament a year ago. We'd heard, at Frostyfest, that the pinball games had been moved. This turned out to be wrong, or else was really overstating the difference between the games being against the wall and the games being in the center of the area. The tournament was progressive strikes, with each player getting one strike for every person who beats them on a game. So a first-place finish gets no strikes, second-place one strike, third-place two strikes, fourth-place three strikes. This was set to nine strikes total, and 18 people attended, so we paid close attention to the time the tournament took as we're planning the Silver Balls tournament after Christmas to also be a progressive strikes tournament that'll probably get about twenty people attending. The Bavaria Match Play tournament was nine strikes, also what we were thinking. The tournament took from 6:30 to about 11:15.

My first game, on Deadpool, started great: against GRV and PUF and TA (more on this later) I was the only person to start and complete a mode, along the way hitting the playfield multiplier target, so that I had a fantastic first ball before draining. And then ... nothing. The drain didn't register. AND, running the tournament, had to come over and investigate and found it was some kind of serious switch problem. He turned the game off, wiping the scores, and fixed things, and had us re-start. On the re-start I bombed the first two balls and thought bitterly, wasn't AND supposed to record the scores as they'd been played and add that to the results of everyone playing two balls on a new game? (Tournaments can have any rules the organizer likes, but usually they try to preserve as best as possible the results of an interrupted game.) Well, it's all right: the last ball I had that interrupted-game magic again and had one of those combinations of shots lined up that rocketed me way ahead of GRV and PUF, both really good players, and the ghost of TA. So I got my win anyway.

TA. Now. That's something odd. He had something demanding his presence that wasn't the tournament, and as the game diagnosis and repair sprawled that demand got urgent and he had to leave. So, JJ (AND's partner) stepped in, shooting the balls for TA into play and letting them drain. This is within normal pinball tournament stuff: if a player can't be found when it's their turn, after long enough, a tournament official (or designated person) will plunge their balls and carry on. Stinks, especially in a strikes tournament, but if TA got done with whatever and came back he could try to recover from whatever that lousy position was. And that's fine. But later on, playing

bunny_hugger on the Munsters, JJ didn't just plunge but actually flipped, seriously playing. AND had told her that she needed to make a sincere effort to play, for reasons I'm not clear on.

bunny_hugger's mood, since JJ beat her on Munsters. She was telling me all about this through the second round, when she and I played each other on Grauniads of the Galaxy. The Rocket Raccoon game. (She had won her first round, on a Willy Wonka game that wasn't great, but was good enough.) I like to think of Grauniads as a particular strength of mine, and it usually is, but this time? I ended up just short of both first and second place, with one of those gaps that, like, ten more seconds of play could have filled.

bunny_hugger, coming from the same distance behind that I did, didn't get anything together and took a last.

bunny_hugger had that infuriating game of Munsters, where she took third place (of three) against JJ who we didn't think was supposed to be seriously playing. A second place on Jurassic Park, which is pretty good considering it's a tough game and we don't understand the rules. A second place on Deadpool, this against GRV and MKS and KN (PUF's partner). And then a win on Willy Wonka, leaving her at seven strikes and having outlasted about half the field. Her next game was a three-player match on Jurassic Park, against PIS and KN again, and she just couldn't get anything together. She and KN both get their ninth strikes this round, and leave in the four-way tie for eighth place. This is a small-to-medium tournament; it won't do anything to help her finish in state.

Me? I get a lot of eyerolls from

I was about to get more, taking a second-place on Grauniads again, against AJR and PUF (knocking out PUF). And then ... there were four of us left. Me, GRV, AJR, and PIS. AJR has the fewest strikes, but I have a comfortably few five strikes. If I can avoid coming in last, I might win the tournament. I come in last. Nobody's knocked out, but in this next game? GRV, PIS, and I each have eight strikes. AJR doesn't. At least two of us are going home after this game. It's Jurassic Park. After my great finish earlier I feel good about my chances, and launch the ball to an utter fiasco. Also on the second ball. PIS is dominating it, while insisting he doesn't know how he's doing it. GRV is a strong second. AJR is having a lousy game, but mine's worse.

Last ball. The main skill shot is shooting the left ramp, and for the first time all day, I find it. There's a super skill shot: right after making this, shoot the right ramp. And somehow I manage this too. The ball's coming down by an upper flipper, which shoots to a side ramp, and I figure, what the heck, go for that. Turns out this makes for a double super skill shot, launching me into third place on about five seconds of play. I might make this yet; all I need to do is start any of the modes or multiballs waiting and oh, my game's over. Well, I might still get third place in the game, if AJR oh he's beaten me. All right.

So that gets me my ninth, tenth, and eleventh strikes; I finish the tournament in fourth place. GRV gets his ninth, leaving him in third place. PIS and AJR go on to another game; AJR has seven strikes, PIS eight, so all AJR has to do is win one game, while PIS has to win two in a row. It's Willy Wonka. PIS puts up a lousy first ball, and another lousy second ball, and I scold him, ``You did not knock me out just to put up seven thousand points on Willy Wonka.'' The game's made by Jersey Jack Pinball, and their fashion is for low scores, but that's dismal even for that. He grins and shrugs, and on the third ball does do better, getting up to a mediocre but respectable fifty thousand points or so, which is good for a loss.

Was it fun to go? While the play was going well, sure. Those final two games for me, my only last-place finishes in a row, not so much. Trying to reassure

bunny_hugger that she was not a lousy player and people did not think she was? No, that wasn't fun, nor was trying to rationalize JJ plunging off TA's balls some of the time and seriously playing other times. Was it worth going? For the sake of getting into the state championship, or improving my seed within the tournament? No, as it worked out, although ... well, I in the final four. If I'd make it to the top two I'd be making progress on maybe overtaking PH in the state rankings. I don't think that's going to happen; there's about ten points separating us and, frankly, PH is an A level player while I'm the state's top B level player. But if I had won this tournament? That gap would be cut about in half, in range of the sorts of things I could make in the small and medium tournaments left in the year. Getting one or two more rounds wouldn't have helped

bunny_hugger, although three more rounds? To where I was? Yes, that would probably get her back into striking range.

And it did eat up our whole evening, and we didn't have time to wander around Frankenmuth or even see much of the Bavarian Inn Lodge and its gift shops and stuff.

Remaining in the pinball calendar year that we're likely to attend are Silver Balls, which probably will be worth something like this tournament was; the two Fremont tournaments the last Sunday of the year, and MJS's New Year's Eve tournament. There's also the Grand Rapids Pinball League open quarterly, on Wednesday, but we're not likely to get there.

Trivia: Ludwig Beethoven's baptism registry at the Church of St Remigius records his name as ``Ludovicus'', a variant that he came to like in later life. Source: Beethoven: The Universal Composer, Edmund Morris.

Currently Reading: Hoax: Hitler's Diaries, Lincoln's Assassins, and Other Famous Frauds, Edward Steers Jr. You know, even without the foreward by Joe Nickell, I'd have known within like half a page that this was repurposed articles from Skeptical Inquirer. It's just got that tone. Not saying it's bad, especially since it gets into stuff like the mechanics of how someone peddles fraudulent documents, a mixture of both forging a document and forging a story that makes the forgery believable, and how they were discovered. And the dumb things that let a fraud go undetected, like, asking for a handwriting analysis where all the samples ``known'' to be the historical figure are, turns out, forgeries from the same author. 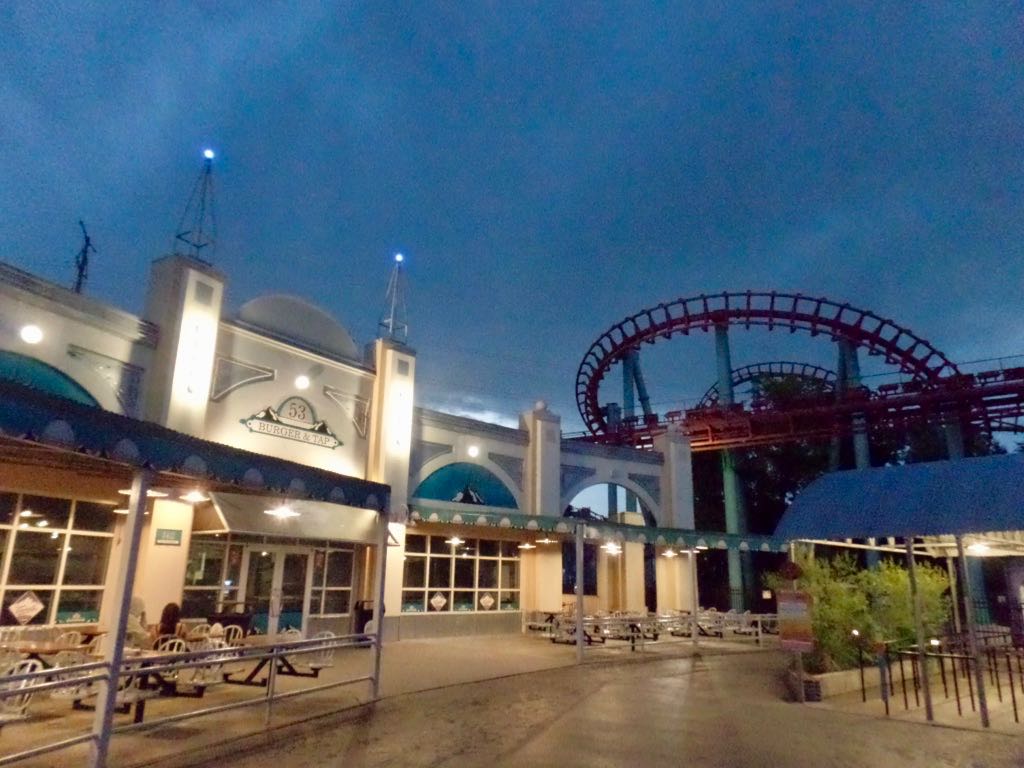 The pouring rain (I swear; look at the reflections of light in front of the restaurant) has the Minderaser roller coaster shut down and is maybe coincidental to the 53 Burger and Tap restaurant being closed. 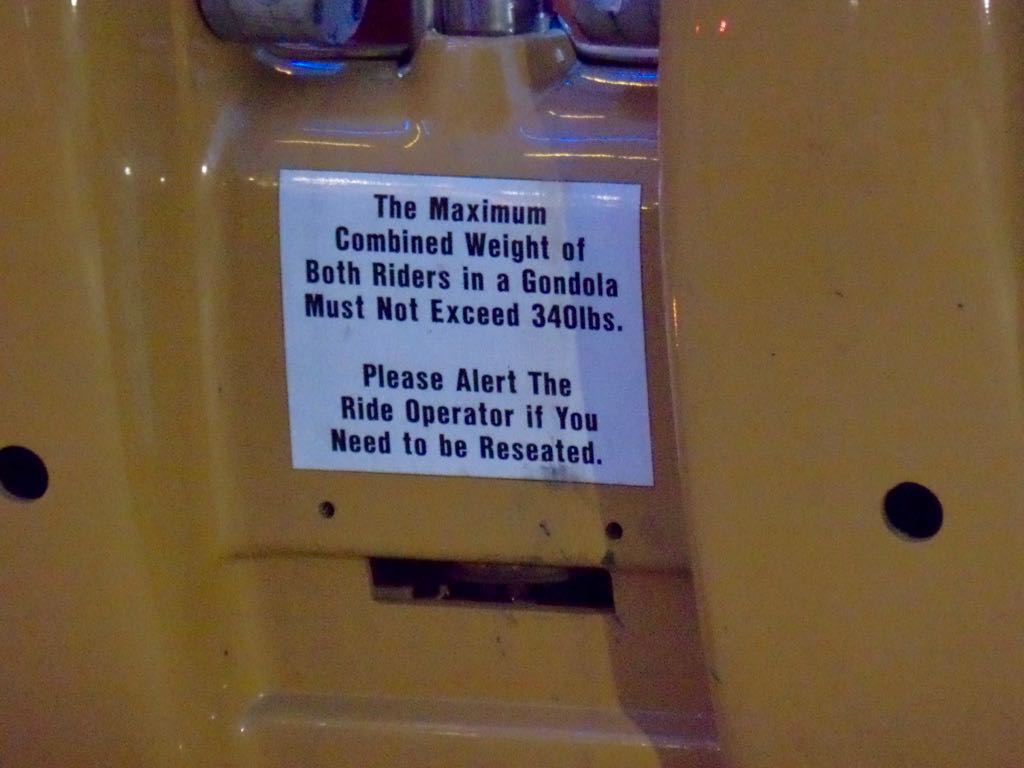 Since we went back past DragonWing I got a snap of that weight limit sign that the operator told us not to worry about. 340 pounds is not a lot for seats designed to hold two adults. 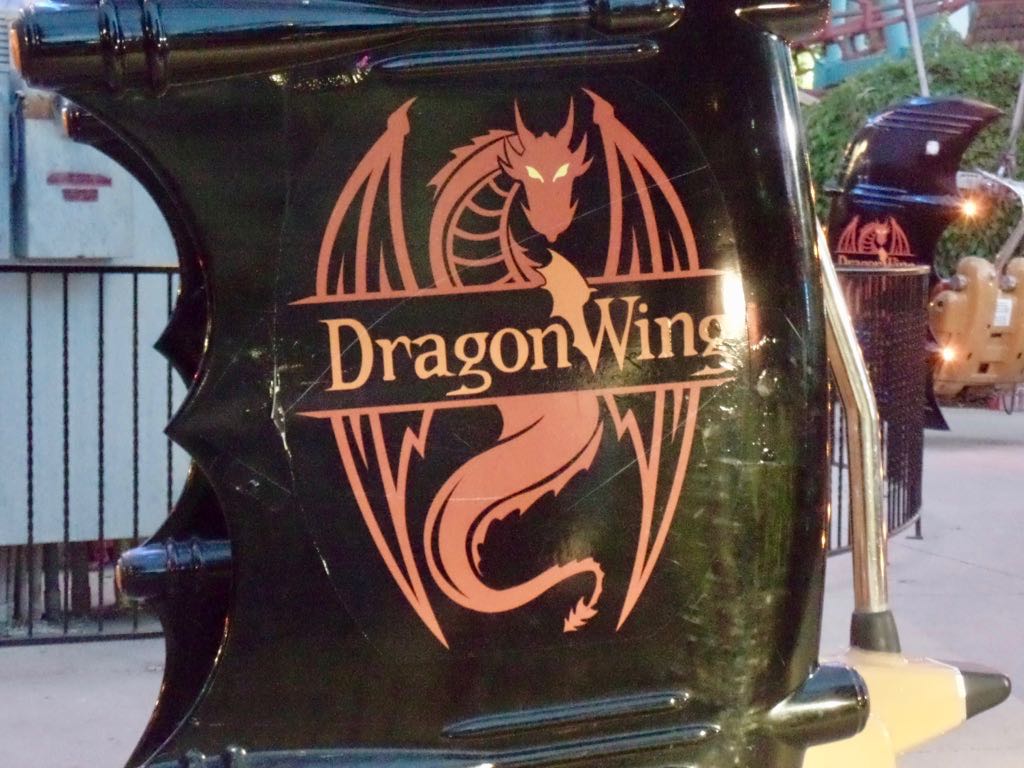 And here's a decent picture of the side of the DragonWing cars, showing off the cool logo (profile orientation) and also dispelling any doubts about oh yeah, this ride wants to be named Batman Something.