You may ask why there exist women's pinball leagues. Then you look at the playfield for Big Juicy Melons, manufactured (though not designed) by Stern, the lone major pinball company, four years ago, and apologize for wondering. If we're to have women enjoying competitive pinball we have to make women feel comfortable. Setting up women's leagues and women's tournaments does something for this.

There is a Grand Rapids chapter of Belles and Chimes, a network of women's pinball leagues from many cities. It's a small chapter. League organizer KEC has been getting weak turnouts to the monthly tournaments. But December's promised to be different. She was holding it as a holiday potluck, and the promise of food always helps.

bunny_hugger wanted to attend, especially as it's been a year or so since she had been able to get to one. So in the wake of the Frankenmuth, we mixed up some potato chip dip, got salads from the neighborhood market with the good deli counter, and set out for Grand Rapids, last Sunday.

The spot was RLM Entertainments, the suite where Grand Rapids Pinball League organizer RLM routes his games from. He's set up the place and held two general tournaments this year; we were only able to get to the first of them. The tournament would be women only, although many of the people competing brought their partners and we had a nice friendly energy. Us guys just hung around, some playing the arcade games, some playing pinball games that were not needed for the current round of the tournament.

The tournament was progressive, nine strikes, uncannily like what we'd played the night before at Frankenmuth. The big difference was there being only nine players, and I wondered how that would affect tournament length. It more than halved the time it took: the last round was only two hours after the start of things. And as the tournament started with nine people, the first several rounds were all groups of three people, so it was impossible to get more than two strikes in a round.

bunny_hugger did not get any strikes her first round. Nor her second. Nor the third. She's got a streak at these Belles and Chimes events: the last two that she attended she won without ever taking a single strike. (Those were slightly different strike formats, though, giving a strike only to the last two finishers in a group.) She briefly harbored thoughts about going through this tournament without a strike either, but that would be asking a lot. She took her first losses --- last-place finishes --- on Shrek, in a game where she had the correct strategy, of getting the Donkey Mini-Pinball game going. She just didn't realize that after that, she had to shoot different targets, spelling out character names (FIONA, SHREK, [Gingerbread] MAN, PUSS [in Boots], that kind of thing). She kept repeating the shot she could make, the already-completed FIONA, and so got weak points for that performance.

She recovered from the last-place finish, though, coming in first the next two rounds and far outpacing everyone. She stumbled the next two rounds, on Dracula and on Iron Maiden, both games she doesn't ever want to play. This brought her to a tie for first place with a couple other people. But she recovered, finishing in first place three more games, and knocking everyone else out of the tournament.

bunny_hugger get into the state's top-24 championship. Only open tournaments, that (in principle) anyone can attend, can count for that. Though next year they're to start having a Women's State Championship, which tournaments like this would count for. Both

bunny_hugger and KEC have volunteered to the International Flipper Pinball Association to organize the Women's State Championship. The tournament did also get

bunny_hugger a lovely trophy: an ornament. It's a large plastic ball, filled with a few jingle bells and styrofoam balls simulating snow. It's hanging from our tree now. There were similar ornaments for second and third place; medals, for fourth through sixth; and little LED-light strands for seventh through ninth.

And me? I just hung around, sometimes offering

bunny_hugger advice and explaining what went wrong on Shrek. And had the slightly odd circumstance of being in a place with pinball and no particular thing to do. I used some time to practice strategy on Dracula, the only game at RLM Entertainments that's also at AJR's house, where the state championship's scheduled to be held. Not that the tables will play quite the same, but that working out rules and strategies can be done on any table. Also on Iron Maiden, since the game has a billion rules and I know like four of them. Iron Maiden I kept threatening to learn something about, only to not be able to put it together. Although it does seem that a particular shot, of the left spinner, is less dangerous than I had always thought it was. Dracula, mostly, I confirmed that the left ramp is the most important single shot in the game. Well, good to know.

We hung out a while longer, with the dwindling crowd, but still left around 6:00 or so. This felt weirdly early: we're used to pinball events that go on forever, that end so late we get home around midnight. We're not used to ones that let us get back to town early enough to stop at Michael's and buy colored markers.

KEC isn't going to have a Belles and Chimes tournament next month, citing how busy it's going to be so near the State Championship Series. (

bunny_hugger is the only woman who could make it; MKS, the second-highest rated woman playing in Michigan, is nearly twenty positions behind

bunny_hugger.) When it resumes? Well, I'd be glad to ride along to watch my love compete.

It's not the case that

bunny_hugger has won every Belles and Chimes event she's been to. But she has got a pretty good streak going.

Trivia: By the mid-14th century artisans were accepted into the 300-person General Council of Genoa. Source: Gold and Spices: The Rise of Commerce in the Middle Ages, Jean Favier.

PS: Reading the Comics, December 9, 2019: It's A Slow Week Edition, Part II, which is why it's basically just a list of comic strips here.

PPS: More of the rain delay at Elitch Gardens. 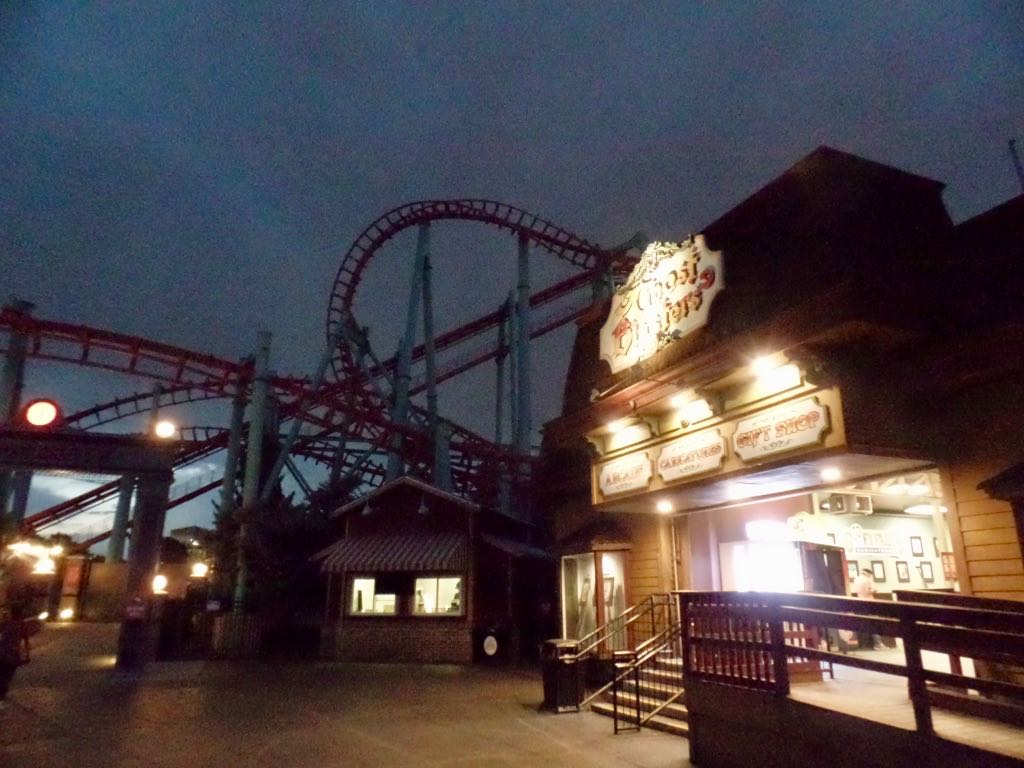 Minderaser shut down for the weather --- the circle of light in the center of the sign is a clock face --- along with the treasured cover of the Ghost Blasters interactive dark ride on the right there. 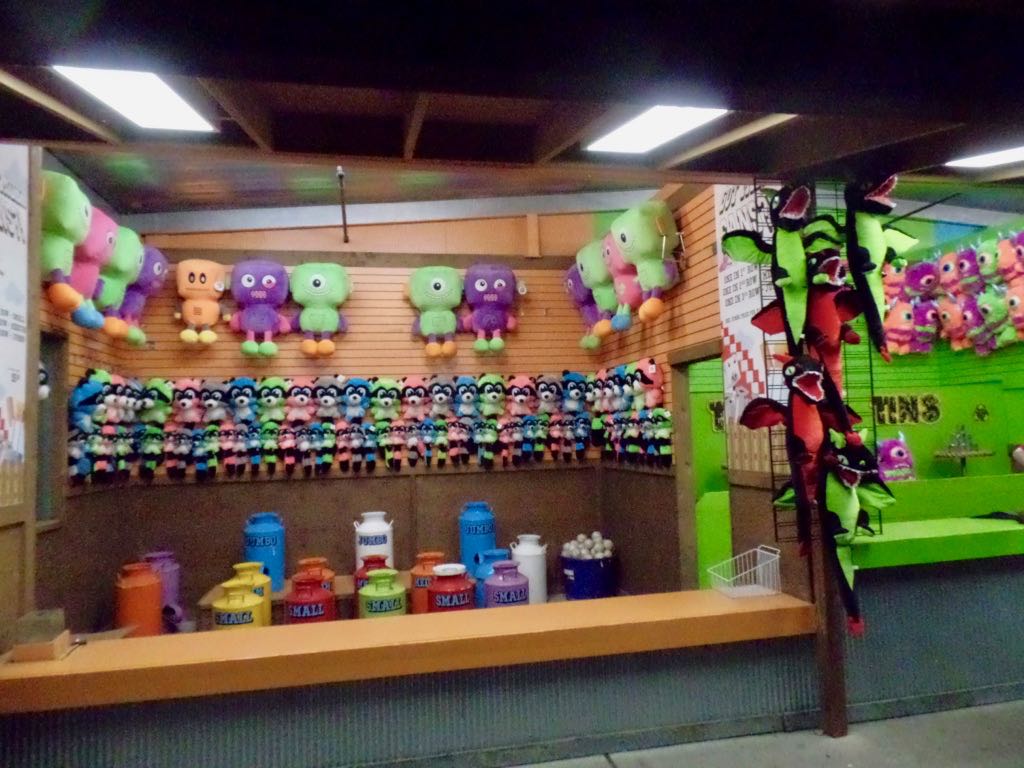 Midway game offering you the chance to be stared at by a rainbow of raccoons. 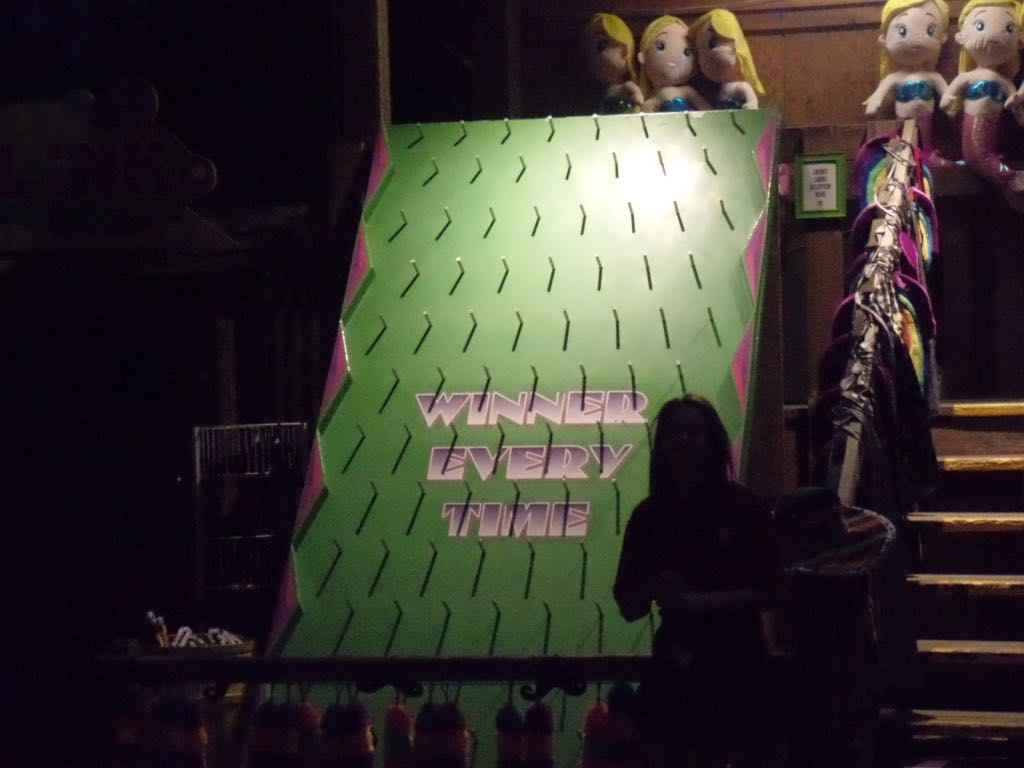 A Plinko-style midway game that just has the right lighting to really catch my imagination here.