So the reason we bought new shelves is, we needed a new fireplace screen. We've had one that came with the house and it's been falling apart badly, and the frame's barely able to hold on to the grate. But the grate is able to snag clothing, such as

bunny_hugger's new jeans, and that was an offence to reason. So the week after Thanksgiving I popped in to Lowe's, trusting that they'd have fireplace grates. So they did, and I went and got one --- a nice flat inline model with sliding doors that didn't actually look good in front of our fireplace, and that I returned.

But while I was there I saw a Black Friday Sale on heavy-duty shelves. The kind with metal frames and plywood shelves. This one promised something like 800 pounds capacity, which is enough even for, like, me storing books. We've needed shelves in the basement, especially since moving some old shelves to get some work done in the basement revealed that the old shelves were held up by inertia alone. So I took a risk and paid the fifty bucks for it.

And then this week I actually assembled the things. The box proclaimed that they could be assembled without tools. This slightly overstates the matter: a last step is tapping the frame with a hammer so as to set it well. It was maybe also a mistake to do this alone;

bunny_hugger was out working at the bookstore. I was able to do this all singlehandedly, yes, although it would have been easier if I had a second me to hold metal frames in place while I worked. I'm not sure that it would have gone more smoothly with

bunny_hugger there, though. There were some confusing parts and I had to make a couple tries, and probably she and I would have had words with one another through that.

It works great, though. I set it up in the corner where we keep the boxes of Christmas and other seasonal decorations. We have a lot of them. More Christmas than anything else, which is why this was a good day to put the shelving up: the Christmas boxes upstairs left space free. And now these boxes are sitting on nice and extremely solid shelves. Best of all, we have a good stable space on which to store things like the fragile His Majesty dinner plate, the great turkey-inscribed plate that we bring for Thanksgiving.

We have much more stuff that could use shelving. Unfortunately the shelves are nearly twice as expensive when not on a Black Friday sale. Shall have to check back to see if they get more reasonably priced sometime soon, since this would do so much to get the basement under control.

Trivia: In 1915 Gimbels Department Store installed its first ``Santa Claus Land'' holiday display, with decorations described at the time as like ``a three-ring circus gone mad''. Source: The Kid of Coney Island: Fred Thompson and the Rise of American Amusements, Woody Register.

PS: Heading out of Elitch Gardens at the end of the night. 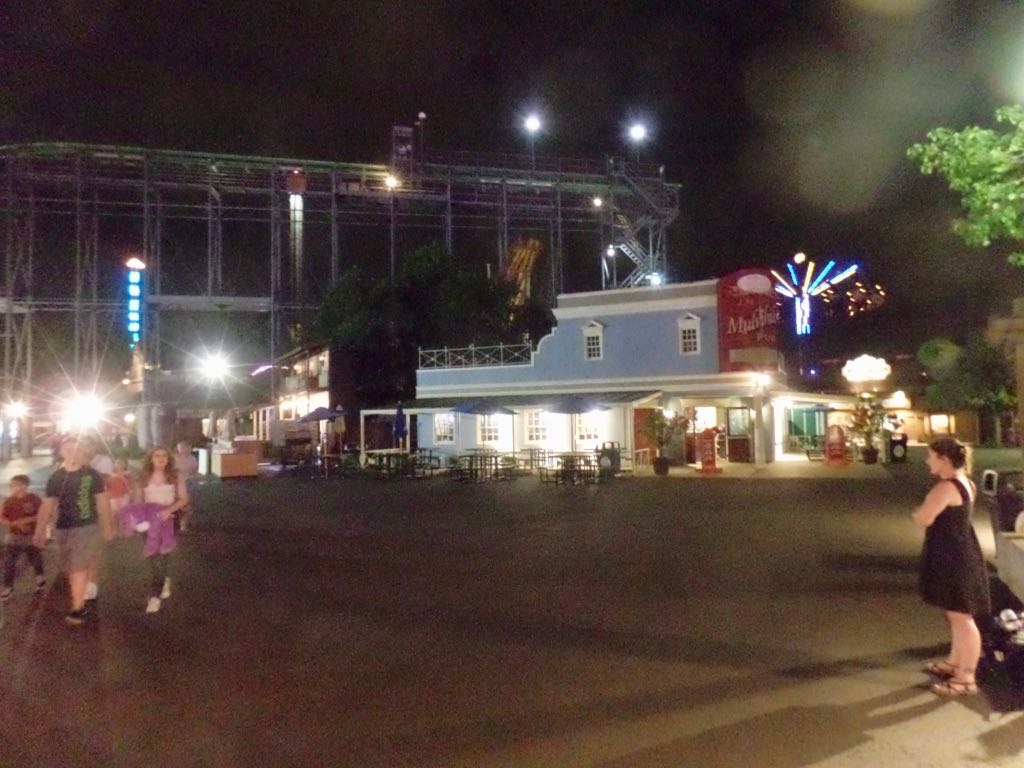 The DragonWing, I think that is, is still going on the right there. But the Sidewinder coaster seems shut down for the night. 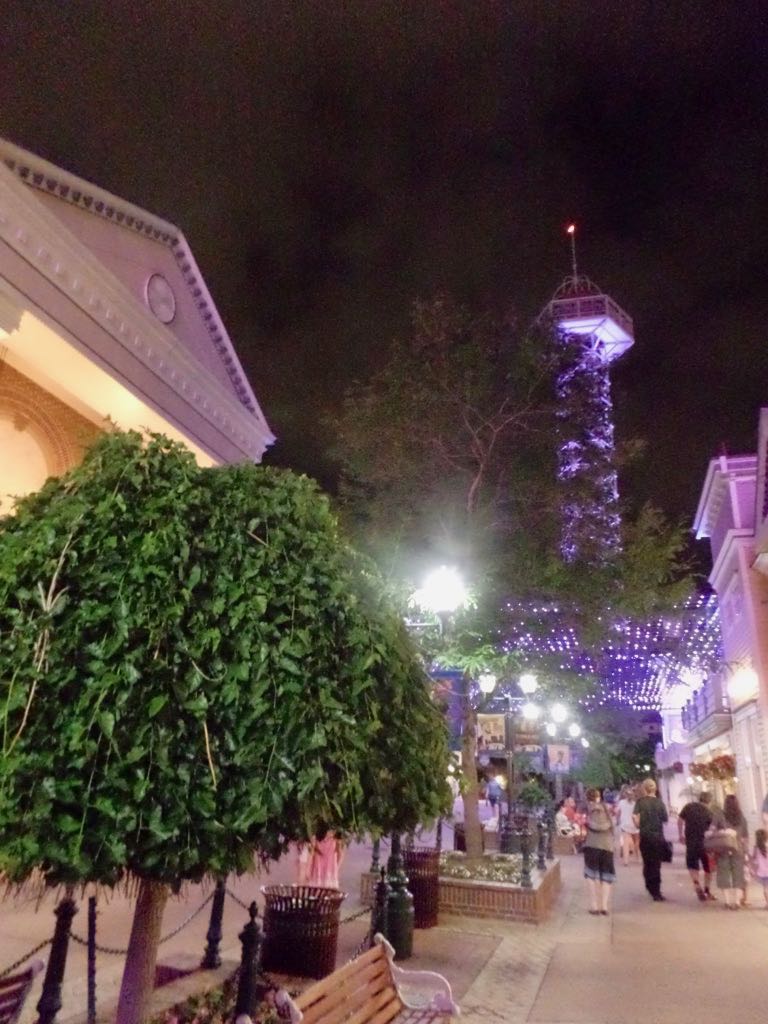 And back to the Trocadero and the midway leading back to the drop tower at the front of the park. 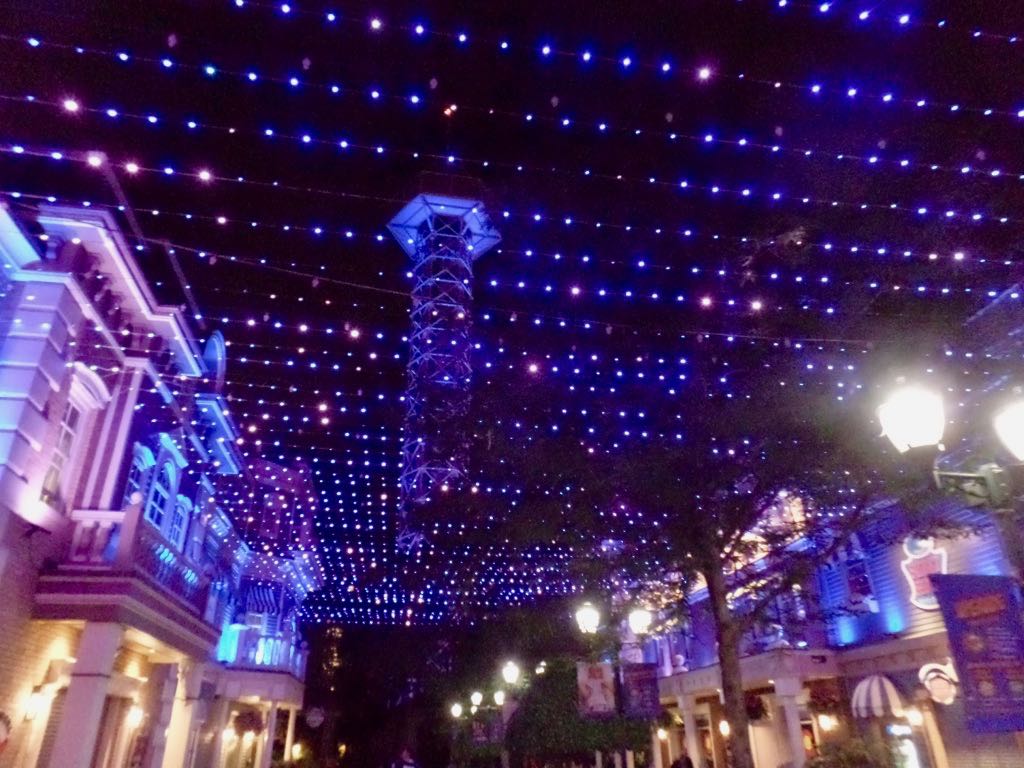 Mesh of overhead lights on the entrance midway.