Sorry to be late. Forgot to post the thing before heading out for the day, and spent more of the day out than I had figured on.

We knew the end of this year would be, more than usual, one of endings. Mackerel Sky, an art gallery/boutique in East Lansing that's been a reliable place for good cards and jewelry and stuff like bread warmers that can be given as gifts to people you don't really know, is closing for good New Year's Eve. But we had also heard unsettling rumors about a coffee place.

Biggby is a local coffee chain. It's grown from one shop, 24 years ago, to the sort of ubiquity in the mid-Michigan area that you expect from hacky jokes about Starbucks told in the 90s. I tell you without exaggeration that on the short distance from our house to the Biggby location I want to speak about, seven minutes and 2.5 miles away, we pass two other Biggbies. The location, the original Biggby Coffee, used to be one of those great 60s-style Arby's, and kept that look. But they wanted to move to a new location, one on the first floor of a mixed-use apartment building that has a drive-through window and everything. (The location was meant for a bank, and it turned out no bank actually wanted it.) But we trusted that was something that'd come up someday, you know, later.

This week, the local alt-weekly reported, they were moving. This Friday was their last day in that location; sometime in January they'll open up in the never-was bank location across the street. So we had to go for one last visit. It's not, oddly, a Biggby that we went to often. It's very convenient from the Michigan State University campus. But from our house, well, there's at least two that we pass on the way getting there, and there's a couple Biggbies pretty close in the other directions too. But it was my favorite since it kept the Old Arby's style, mid-century slate and the arched overhang and all.

So we went there for lunch Friday. We were shameless about photographing the place from outside; the newspaper article said that the owners of the apartment building had bought this lot, but claimed to not know what they're going to do with it, which is what they say when they're going to tear it down and put up the same mixed-use three- or four-storey building they've put in all over town. When we walked in the staff said they hoped we'd send them some pictures. They had run some contests, for people to send their photographs of Biggby Number One, but hadn't gotten as many as they wanted. And they had a great blank wall that they figured pictures of the original place would be good for. It's flattering to be asked. I'm sure that it built their confidence in us that both

bunny_hugger and I were there with real cameras, and photographing seriously, like, several variant angles of the same item, like this modern-art sculpture to coffee community we'd never noticed was out front. Or just that we were taking pictures at all.

They also asked us --- and anyone coming in --- to write something in the memory book and, you know, why not? I wrote a little one about a time I'd come in there for lunch after getting some books from the Michigan State University library, and had a quite pleasant time reading and having a bagel and tea.

bunny_hugger wrote about her first visit to this Biggby, when she and some grad school friends were getting coffee around a movie-in-the-park showing of Lilo and Stitch. That one's a particularly tightly bound memory since she had gotten back then a White Teddy Bear --- many of their earliest coffees were named bears of some kind, and a few have even survived to the more respectable chain of today --- and so the memory's fused with Elvis's song Teddy Bear, and Elvis is fused with Lilo and Stitch.

And we also got asked by a woman eating there if we were staff, come to return for the last day of the place. No, just locals,

bunny_hugger moreso than I. The woman told us that her daughter had been the second employee hired at this place, back when it was started. And how she could've stuck with it and been vice president of marketing or something, except that she wanted to be a teacher, which is after all how it always goes.

After all that, we went to Mackerel Sky, to do a last bit of Christmas shopping and also to have a possibly final visit. We can't say for sure it's final --- they will be open through to the 31st, they plan --- but we've got a busy week ahead ourselves. They had, as usual for the Christmas season, hot tea and cookies for snacking. I ended up stockpiling more cards for future events; I don't know how long I'll be rationing these out. We're running out of places to get good interesting cards now.

bunny_hugger got some cards plus some kitchen stuff for her brother, for Christmas. And I took some pictures of the place, including of the last gallery installation, posters of all(?) of the newsletters they've published their 31 years of operation.

As I say, I don't know that this is the last time we'll be in Mackerel Sky. But it was a lot to take last photographs of in one day.

Trivia: The original charter for the New York and Erie railroad prohibited it connecting with any railroad leading into New Jersey, Pennsylvania, or Ohio, a provision intended to keep it from drawing trade away from New York City. Source: The Story of American Railroads, Stuart H Holbrook.

PS: And here's the end of our trip to Elitch Gardens. Here's hoping we can get back. Philadelphia Toboggan Company carousel #51 again, turned off for the night. 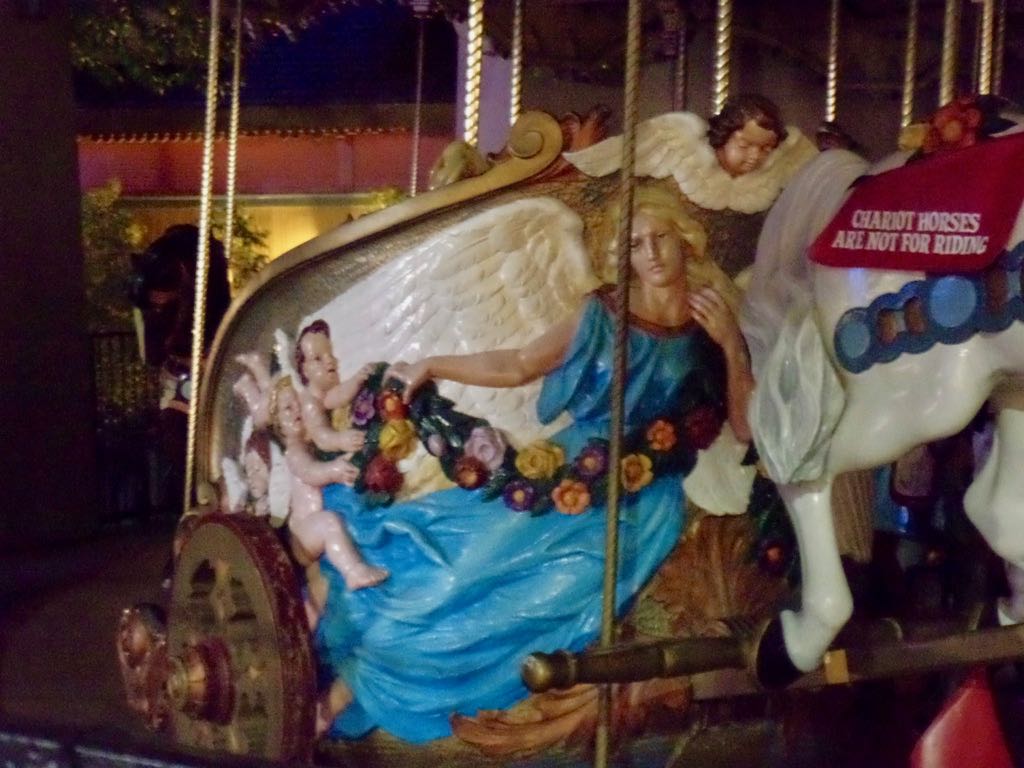 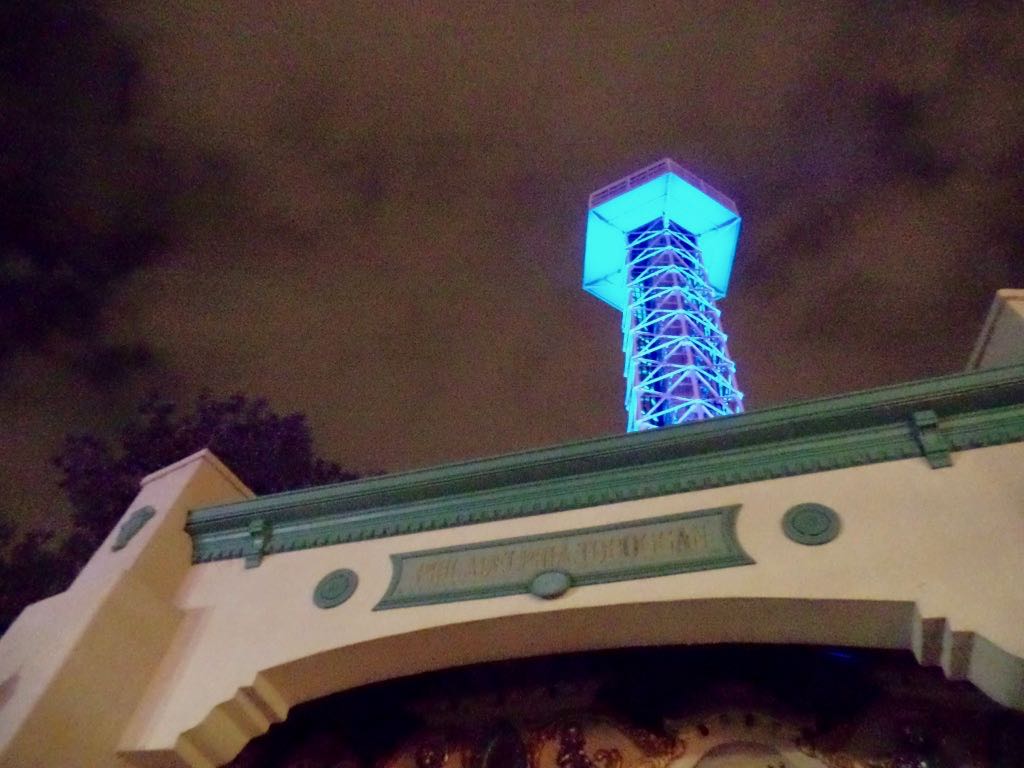 Looking up at the drop tower by night.